Shocked at ‘Bikini’ snack, they would have been outraged by what was sold in Malaysia!

Posted on August 5, 2016 by weehingthong

Shocked at ‘Bikini’ snack, they would have been outraged by what was sold in Malaysia!

Indonesia’s official Food and Drugs Monitoring Agency and local authorities are searching for the manufacturer of the snack in Bandung but have so far been unsuccessful after a three-day hunt. 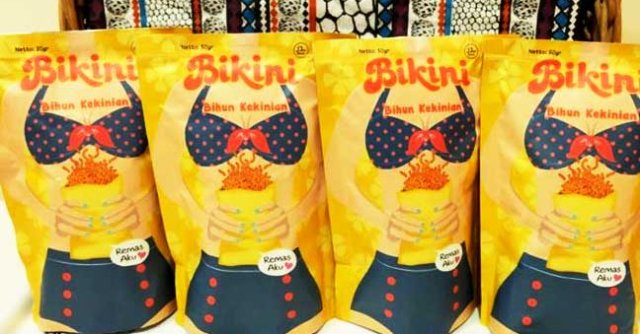 JAKARTA: A noodle snack with a picture of a bikini-clad woman and the words “squeeze me” on the packaging has triggered outrage in Muslim-majority Indonesia, with consumer groups calling Friday for it to be pulled from shops.

The snack takes its name “Bikini” from an acronym in local slang meaning “trendy rice noodles”.

But the food, which can only be ordered online, sparked anger among conservative sections of society in Indonesia, which has the world’s biggest Muslim population.

Tulus Abadi, executive chairman of the Indonesian Consumers Foundation, said that the name and packaging were “verging on pornography, and therefore it has to be pulled from the market”.

Ridwan Kamil — the mayor of Bandung city on Java island, where the snack is believed to have been produced — also called for the food to be withdrawn from shops as it had “caused uneasiness in society”.

Care for a barbecue sausage, phallic-shaped?

ACCA: Sausages come in many shapes with combinations of meat and spices. Most are packed in longish intestine casing.

But a trader at the tourist-popular Jonker Walk here must have thought it a “brilliant idea” when he packed his sausages in the shape of a penis.

The Malacca Historic City Council thought otherwise and immediately revoked the business  licence of trader who has been selling the barbecue sausages for about two weeks.

“The trader also violated the by-law by selling food items when the licence only stipulated that souvenirs and gifts could be sold by him,” Zainal said on Sunday.

Chief Minister Datuk Seri Idris Haron was equally annoyed when he learned of such “lewd things” being sold that could tarnish the image of Malacca as a tourist state.

1 Response to Shocked at ‘Bikini’ snack, they would have been outraged by what was sold in Malaysia!