Himpunan Hijau goes Down Under (to Australia)

WONG TACK AND 5 OTHERS FROM HIMPUNAN HIJAU ARE IN AUSTRALIA!

Shareholders face off with anti-Lynas groups in Sydney

Shareholders of Australian mining firm Lynas Corp today came face-to-face with allegations over its rare earth plant in Gebeng, Pahang, at their Sydney annual general meeting when Malaysians spoke from the floor to expose potentially disastrous issues surrounding the plant 25km from Kuantan. 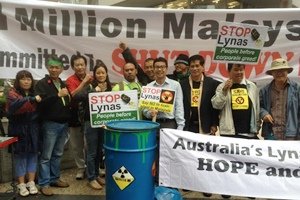 Semambu assemblyperson Lee Chean Chung, accompanying Tan at the AGM, alleged that Lynas may not be above shoring up the election coffers of BN.

NSW Greens Party MP Jamie Parker, a stalwart supporter of the anti-Lynas campaign, reminded the crowd outside the AGM that “the only reason Lynas is operating in Malaysia is because of the democratic deficit there”.

Speaking on a rain-soaked Pitt Street sidewalk just across The Establishment, the hotel-venue for the Lynas AGM, Mr Parker said: “1.2 million Malaysians know there is no transparency and openness on environmental matters in Malaysia.

“Australian investors who are ethical should not be investing in Lynas. They should be made aware their investment is at risk because Lynas may be called to book.

“We have to stop Lynas, for Malaysians and for its investors.”

Shareholders face off with anti-Lynas groups in Sydney 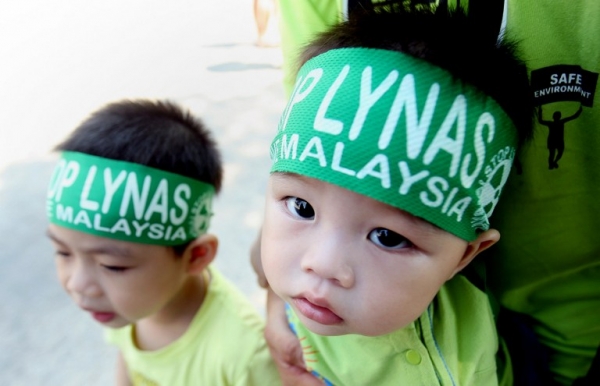 Ahead of Lynas AGM, Himpunan Hijau camp outside Aussie office

Its chairman Wong Tack said they had been holding a camp-out at the Lynas headquarters as the company is scheduled to hold its annual general meeting of shareholders tomorrow.

He said in a statement that they wanted to send a strong message to Lynas’ management and shareholders that their plant in Gebeng, Pahang, was not welcome and should be shut down.

Six Malaysian activists from the Himpunan Hijau (Green Assembly) group have begun a 24-hour, week-long occupation of the front of the corporate HQ of Lynas, the Australian company that has built an unwanted toxic rare earths refinery in Kuantan, Malaysia. – Pic by Peter Boyle.

Wong Tack and Himpunan Hijau (HH) have become the new “eco super heroes” of veteran Australian environmental activists after they set camp right in the corporate HQ of Lynas in the heart of Sydney’s central business district.

“These people are amazing,” veteran Australian Friends Of the Earth campaigner Tully McIntyre told me. “All six of them came straight from the airport and set up the protest camp and have not stopped for three days and nights. they have been sleeping out rough and getting up early in the morning to greet the first of the office workers and businessmen in suits.”

Sydney’s business crowd may be a bit startled by the Himpunan Hijau protest camp but more than a few “suits” are stopping to hear the protesters’ case.

Himpunan Hijau (Green Assembly) a movement from Malaysia against Australia rare earth miner Lynas Corporation are in Sydney occupying Lynas headquarters. In this video Himpunan Hijau chairman, Wong Tack talks about the mass movement – which includes a petition of over 1.2 milli0n Malaysians – who want to shut down the toxic and polluting Lynas Advanced Materials Plant and for Lynas to leave Malaysia. 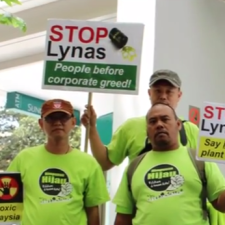 Published on Nov 26, 2013
Six Malaysian activists from the Himpunan Hijau (Green Assembly) group have begun a 24-hour, week-long occupation of the front of the corporate HQ of Lynas, the Australian company that has built an unwanted toxic rare earths refinery in Kuantan , Malaysia. They have come with a petition with the signatures of 1.2 million Malaysians who demand that the toxic plant be shut down by June 29, 2014 at the latest. Peter Boyle from Green Left TV spoke to Himpunan Hijau chairperson Wong Tack at the occupation.

WHAT
SYDNEY | Eight representatives from Himpunan Hijau, one of the largest environmental movements in Malaysia, will be travelling to Australia to protest against Australian rare earth mining company, Lynas Corporation. Lynas has started exporting its toxic and radioactive rare-earth pollution to it’s controversial refinery, the Lynas Advanced Materials Plant (LAMP) in Kuantan, Malaysia.

Himpunan Hijau will be joined by Friends of the Earth Australia, Beyond Nuclear Initiative, AidWatch and The Greens.

The LAMP is vehemently opposed by at least a million Malaysians. It was constructed without any public consultation and near fishing communities. Its pollution and waste management are seriously deficient according to a scientific report[1] by Germany’s Oeko Institute.

StopLynas.org
An affiliate campaign of Friends of the Earth Australia