#LaksaGate: The Record should be for “The Biggest Bowl of BAD Laksa Sarawak”

1. Deputy Chief Minister Datuk Amar Abang Johari Tun Openg, “Depends on how you look at it. If they have a noble objective of promoting our food, why not?”

2. Plaza Merdeka general manager Cheah Kheng Mun, “After the display or mock-up, we cannot simply give away (the laksa) because our advisors said the gravy, which is santan-based (coconut milk), needs to be maintained at a certain temperature.”

A popular shopping mall in Kuching has conceded that their record-setting attempt at making a giant bowl of Sarawak laksa was a “mistake” and thanked the public for their feedback.

“We (will) improve from (our) mistake. If we start to ignore the mistake, we cannot improve. Our philosophy is make sure (we) do the right thing, rather than do the thing right. It is a very simple fact,” said Plaza Merdeka general manager Cheah Kheng Mun.

According to Borneo Post, Cheah said this to reporters yesterday during the distribution of 1,500 bowls of Sarawak laksa to mall goers.

On Friday, Plaza Merdeka made it to the Malaysian Book of Records by making the giant noodle dish involving 600kg of ingredients which translated to 1,500 servings.

But after it was revealed that the entire dish was thrown away after the event, Sarawakian netizens expressed outrage over the wastefulness of the stunt, more so because it involved Sarawak’s signature noodle dish.

No, not wasting. It’s cost. So says a politician.

The Minister of Tourism, Arts and Culture said the throwing out of the equivalent of 1,500 bowls of the dish later that night was not necessarily a waste of food.

“Depends on how you look at it. If they have a noble objective of promoting our food, why not?” he said when asked to comment on the throwing out of some 600kg of food used to achieve the record.

“They look at it from their own perspective, and the one who complained to The Borneo Post (had his) own perspective. The question is nobody can judge it. The same with the longest ketupat, it is a waste,” he said.

According to him, the people should consider the cost-benefit analysis for the event.

“The cost is waste but benefit could be more. So you must balance it, cost and benefit,” he said.

Don’t slam me over S’wak laksa and cooking oil:Chef Wan” Chef wan don’t u dare to blame the Govt

SEE WHAT THEY WASTED!

How big is that bowl of #SarawakLaksa ? Read the ingredients pic.

KUALA LUMPUR ― A Sarawak mall has planned to throw away the equivalent of 1,500 bowls of Sarawak laksa that was cooked for its successful bid on Friday (Oct 28) to set a record for the Malaysia Book of Records.

Its organiser Debra Sim confirmed the contents of a huge bowl custom-made for the attempted “The Biggest Bowl of Laksa Sarawak” feat at Plaza Merdeka there yesterday would be binned for “being unhealthy”.

“It will all be thrown away because it is unhealthy for human consumption,” Ms Sim was quoted telling local daily The Borneo Post.
…

Secondary school teacher Michael Law had reportedly called up the local daily to complain over the food wastage.

“I saw the function on the Facebook page and called to confirm whether the enormous amount of food was being wasted just to enter the book of records. When it was confirmed, I felt very sad.

“I feel that the minister, who was officiating at the function, should have known what he was doing. He missed the chance to educate the organisers and the public of the good values of not wasting food,” the 44-year-old was quoted saying.

Mr Law was referring to Sarawak minister of local government Datuk Dr Sim Kui Hian, who had witnessed the event yesterday together with local celebrity chef Datuk Redzuawan Ismail or Chef Wan as he is popularly known. 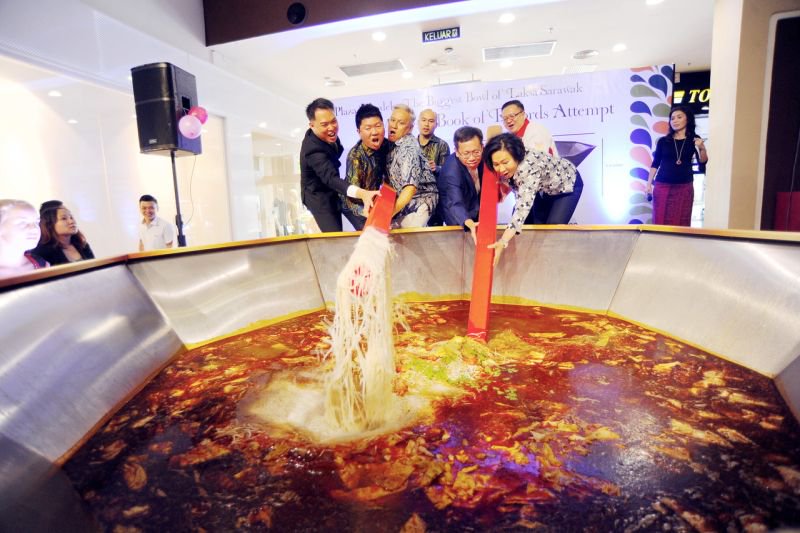 Like Loading...
This entry was posted in Uncategorized and tagged biggest bowl of sarawak laksa thrown away, chef wan at kuching mall sarawak laksa waste. Bookmark the permalink.