ASTRO (but pronounced by Cantonese speakers on Astro as As**ole)

KUALA LUMPUR— The raging debate over “Allah” has found its way onto television screens, after a viewer complained the Arabic word was censored from a Hindi film shown by satellite television broadcaster Astro.

According to the complainant, he was watching the Bollywood movie “Pukar” on Astro’s Zee Variasi channel on January 12 when he noticed the alleged censorship of the word in the song “Ek Tu Hi Bharosa” near the end of the show.

“‘Ya Allah’ was silenced throughout the song, similar to the word ‘sex’ in ‘Two and a Half Men’ aired on ntv7. I am angered with such disregard by Astro for treating the word Allah as a derogatory word,” read the complaint to the satellite TV operator that was also made available to The Malay Mail Online.

The viewer, who asked to remain anonymous, told The Malay Mail Online that Astro has yet to reply to the complaint he sent via email on Monday.

Astro has also not responded to telephone calls and emailed enquiries made by The Malay Mail Online over the complaint of censorship since the start of the week.
…

This is not the first time Astro has encountered controversy over religion in its programmes.

In August last year, The Malay Mail Online received a letter from a viewer named Patricia Anne Martinez who complained then of a visual warning displayed repeatedly during a documentary on Pope Francis, the head of the global Catholic Church, aired on Astro.

According to the complaint then, the message was shown four times during the documentary and read: “This programme portrays depiction of religious figures and represents views other than Muslims’. Viewer discretion is advised.”

Martinez, who is Catholic, had labelled the warning as “insulting” and “insensitive”, saying it was akin to portraying a show on the head of one of the world’s largest religions as similar to pornography.

Following massive public uproar, Astro reworded the disclaimer soon after and appended it to subsequent broadcasts of the documentary.

The new disclaimer read: “The following programme may contain religious views, statements or scenes that may require viewer discretion.”

Five members of the NGO formed a ‘Bantah Astro’ group and submitted a memorandum to the Communications and Multimedia Ministry.

They were received outside Parliament House by MPs from the opposition.

“The monopoly of Astro only benefits government cronies at the people’s expense. The worst is that, its services are very poor.

“By right, the government shouldn’t let Astro raise its fees as and when it fancies, ” SAMM spokesperson Khairool Anuar Al-Megat said.

In the memorandum, SAMM noted that it had protested against Astro’s last subscription increase, which was implemented on Nov 24.

SAMM also questioned why Malaysia must have only one exclusive pay-TV provider, citing that India has six operators and Australia has three.

Astro has informed subscribers that it will charge an additional RM2 for the Family Pack and RM6 more for the Sports Pack.

WHILE THE PLANNED INCREASES ARE NOT QUITE ASTRONOMICAL, ARE THEY JUSTIFIED?

The quality of broadcast has still not improved, as reception is disrupted during thunderstorms. At the same time, programmes are constantly repeated. 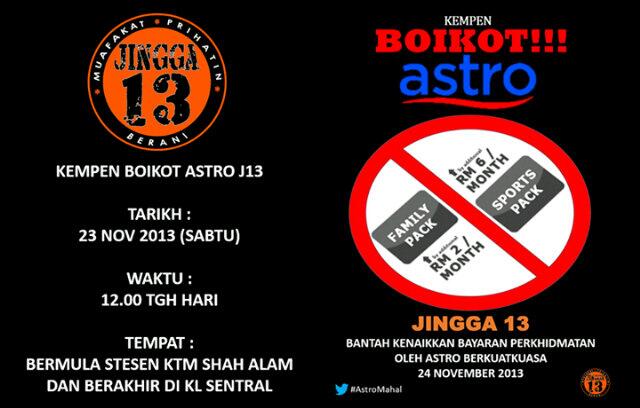 “Astro recently announced that they made a profit of RM2.3 billion and now they want the people to pay more?”

Jingga 13 Malaysia warns Astro that they will organise a nationwide boycott if the company proceeds with price increases.

KUALA LUMPUR: Jingga 13 Malaysia an organization closely linked to Parti Keadilan Rakyat (PKR) has urged Astro to call off its plans to increase the monthly rates for their sports and family channels to be effective Nov 24.

The pro Pakatan Rakyat group slammed the private broadcast TV satellite company for taking advantage to increase the price of its channels without considering the burden to be endured by their customers.

“We demand Astro not to implement these two new charges where each household will have to pay an additional two ringgit for the family channels and six ringgit for sports channels.”

“Astro has been monopolizing the pay per view television channels in this country for many years. Now they want to double their profits without considering the hardship of the rakyat.”

“This is not right and Astro must not increase its charges,” said Jingga 13 secretary DK Vicknesvaran .

Jingga 13 on warpath against Astro

The government’s approval of a fee hike by pay television service Astro reveals that it is unconcerned about the rising cost of living, according to NGO Jingga 13.

Its secretary DK Vicknesvaran said the increase comes at a time when people are already burdened by the impact of reduction or removal of subsidies on petrol and sugar, and proposed 12-year limit on the life span of cars on the road.

“We call on Astro to cancel the fee hike … We want Astro and the Information, Communication and Multimedia Ministry, which approved it, to (understand) the suffering of the people,” he said.

Jingga 13 on warpath against Astro

Like Loading...
This entry was posted in Uncategorized and tagged Astro, Astro increases prices, Jingga 13, PKR, price hike for sports and family channels. Bookmark the permalink.