Posted on September 13, 2019 by weehingthong

Hong Kong protesters have a new target: the subway. Latest from the front lines https://t.co/SokM0DvvJ8 via @WSJ 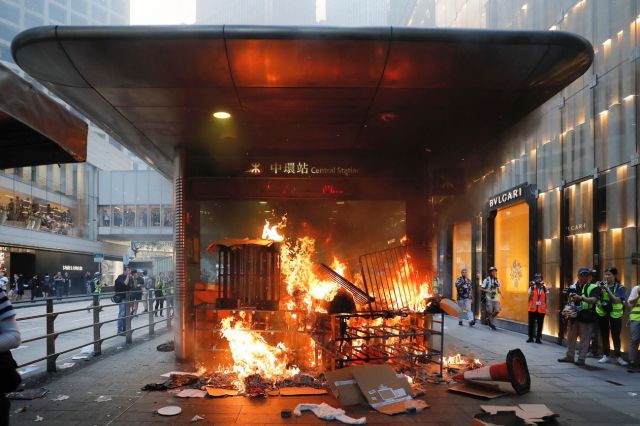 HONG KONG—At the end of a recent pro-democracy rally in Hong Kong, two masked protesters turned their attention to what has become a new target for demonstrators: the city’s subway system.

Armed with a metal rod, they attacked a window at an aboveground entrance to Central Station—next to an office tower and among city parks—while a group of reporters looked on. Later, protesters hurled rocks at the glass. Down the street among luxury shops, demonstrators lighted a fire in front of another station entrance.

Even an institution so central to daily life in Hong Kong as the subway is finding it difficult to navigate the city’s increasingly polarized political atmosphere.

For weeks this summer, the hyper-efficient and super-clean MTR—after its initial name, Mass Transit Railway—was an important asset for hit-and-run protesters, providing a quick way to move from place to place and escape police.

But protesters turned strongly against subway operator MTR Corp. in late August, when the company got a court order to help it prevent vandalism and interference at its stations, signaling a tougher stance against the demonstrators. That same day an English-language column in the Global Times, a state-run tabloid in China, criticized the subway operator for assisting protesters, feeding protester suspicions that the company was feeling pressure from Beijing.

Since then, the company has frequently shut down stations near demonstration sites.

Protesters accuse the subway operator, 75%-owned by the Hong Kong government, of aligning with the authorities. They have called for a boycott of the system and protests at malls and other properties owned by MTR.

Tensions have been further inflamed by video posted online that shows police beating people in a subway car. Protesters have berated MTR for not releasing all of the station surveillance footage from Aug. 31, the day of the alleged beating.

Under Hong Kong’s streets, the subway becomes a battleground for protesters and police https://t.co/1vG62YFEmk

Hong Kong protestors tagging the subway station where HK police battered civilians with toxic sprays and batons – making a lot of them severely injured. Rumours say they hid the corpses of these civilians which they killed with excessive force. #chinazi #StandWithHongKong https://t.co/Ko7ygGu1vM

Under Hong Kong’s streets, the subway becomes a battleground for protesters and police …

Like Loading...
This entry was posted in Uncategorized and tagged #BeWater: Hong Kong Protesters target the Subway system (13 September 2019). Bookmark the permalink.