Video: Along (Loan Sharks) leave after doing their job? Who can stop them? #NoFear #Lawless

WHAT IF THE LOAN SHARKS RETURN?

PETALING JAYA, Oct 17 — Residents in Jalan Sepah Puteri 5/14, Seri Utama, here are in fear and worried after an attack believed to be by Ah Long at a house in the area on Wednesday.

According to a neighbour of the 66-year-old victim targeted by Ah Long, known only as Muhamad, in his 50s, was shocked when he viewed a minute-long video of four men armed with parang and hammers in his housing area in Kota Damansara go viral on Facebook.

“Apparently, it was my neighbour’s house which was targeted..at the time of the incident normally most residents are away at work,” he said when met by Bernama here today.

He said his neighbour had not been seen at her house since glass bottles containing red paint were thrown at her house by the four armed men.

“The woman lived alone and rarely mixed with neighbours,” he said.

He hoped the authorities would quickly arrest the suspects involved and solve the problem of the Ah Long gangsters’ threat because the residents were traumatised by the incident.

Believed to be loan sharks, the four were caught on CCTV slashing the rope at the entry boom gate and threatening other motorists as they fled the scene.

PETALING JAYA: A 66-year-old woman, rudely awoken from sleep by the sound of shattering glass, saw four men throwing bottles filled with red paint at the gate and wall of her house at Kota Damansara.

According to The Star, a CCTV recording of the four brandishing machetes and a hammer, and hurriedly fleeing the scene went viral after a Kota Damansara community group posted it on Facebook.

In the video footage, the four, believed to be loan sharks, are seen at the guardhouse, frantically slashing at a piece of rope tied to the entry boom gate.

They were also seen making threatening motions at several drivers at the scene, who were forced to reverse their cars so the four could escape.

Petaling Jaya OCPD Asst Comm Mohd Zani Che Din said the incident occurred at about 2.50pm on Wednesday and that the men were seen taking off in a silver Toyota Estima.

ACP Mohd Zani said that preliminary investigations revealed the woman had not borrowed any money from loan sharks although the prevailing suspicion was that her ex-husband did, using her home address. The two divorced in 1987. 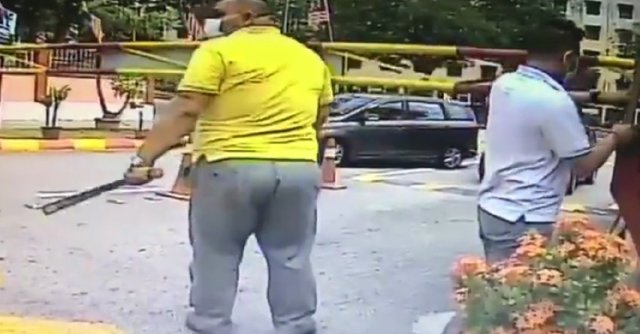 Like Loading...
This entry was posted in Uncategorized and tagged crime in KL, crime in malaysia, loansharks along, PJ petaling jaya crime. Bookmark the permalink.

1 Response to Video: Along (Loan Sharks) leave after doing their job? Who can stop them? #NoFear #Lawless