Ex Election Chairman, who joined Perkasa to help keep Malays (UMNO) in power, is now with Parti Pribumi Bersatu Malaysia. Is he still with Perkasa?

“We are aware the pressure EC is facing from the ruling coalition to ensure BN is returned to power during the 14th general election.

“But the EC, as a body responsible for a democratic election process, should and cannot be a BN lackey by violating the federal constitution which requires the commission to have the public’s trust,” they said.

The former EC chief and three MPs also were critical of Mohd Hashim for snubbing the opposition.

“All our written communication to him have been ignored.

“Clearly, he is being the most unprofessional election chairperson in the history of the EC and indirectly degrades the EC’s position as an independent and fair commission to a mere agency that complies to the prime minister’s directives.

“The EC chairperson refusing to engaged stakeholders, namely the opposition political parties, has reduced the EC’s credibility to its worst in the history of democratic elections in this country,” they said.

He said as a former EC chairman, he knew how to keep the Malays in power.

He said three re-delineation exercises of electoral borders, which were done during his time with the EC, had ensured Malays remained in power. “We did it in a proper way. Not illegally. The people who lost in the past general elections claimed that we did it wrong. But if we did, how did Barisan Nasional lose to the opposition in Kelantan, Penang and Selangor?” asked Abdul Rashid.

Abdul Rashid was the EC chief from 2000 to 2008 and the EC deputy chief before that.

…Ambiga, who was the Bar Council president before leading Bersih, said that this admission meant that the re-delineation exercises Abdul Rashid had conducted in the past were illegal.

“(It) also means redelineation did not follow the Federal Constitution. Will this EC do the same? They should respond!” she said.

He is speaking the truth: delineation is not to protect Malay power but to keep BN in power…

The redelineation exercise which the Election Commission will soon undertake will not be done with the aim to safeguard Malay political power, EC chairperson Abdul Aziz Abdul Yusuf said.

Instead, he said, the exercise will follow the principles set out in the Federal Constitution.

“Protecting Malay power is not a principle which the EC uses to guide the redelineation process,” he said in a text message to Malaysiakini.

Here is the usual excuse, one given by countless people in uncountable dictatorships after being arrested for atrocities committed by them: I was following orders.

However, Wan Ahmad, who was EC secretary when the last redelineation exercise took place in 2002, stressed that the secretariat merely took instructions from the seven-member commission which was then headed by Abdul Rashid.

“In the EC, the (commission) members are the ones who have the powers and responsibilities. The secretary and officers are only doing things that are decided (by them).

“In 2002, I was the secretary, and not in the position to do anything else. I just implemented the decisions by Tan Sri Rashid, who was chairman at the time,” he told Malaysiakini yesterday.

“Perhaps, it would make more sense to say that the delineation benefitted the ruling party. This is what we have always claimed – and he has confirmed it,” she told Malaysiakini.

In other words, Ambiga said Abdul Rashid had used different criteria for the delineation other than what was provided by the Federal Constitution.

The Bersih leader stressed that the concern now was whether the present EC was doing the same with regard to its current delineation exercise.

“The present commission must own up or disagree with it (Abdul Rashid’s statement). Silence is not an option. I am asking the present EC to come clean on how they are going about it,” she said.
…
Zaid: Malays already have power

Meanwhile, former law minister Zaid Ibrahim described the ex-EC chief’s decision to join Perkasa as a blatant admission.
…
As for Abdul Rashid’s remarks pertaining to the delineation exercise, the former minister said: “It is unfortunate that the former EC chief would speak blatantly about this. Fairness must be a core privilege.”

“When you do not have a delineation exercise that is fair… that is not right,” Zaid (right) told Malaysiakini.

Former Election Commission chairperson Abdul Rashid Abdul Rahman’s speech at a Perkasa event yesterday appeared to be an admission of engaging in gerrymandering during his eight-year tenure as commission head.

Outgoing Bersih co-chairperson Ambiga Sreenevasan said Abdul Rashid had, in a series of tweets, brazenly admitted to this when he said that three re-delineation exercises which he oversaw had ensured that Malays remain in power.

“(The) former EC chair joining Perkasa is one thing. More important is his admission of (as I see it,) gerrymandering.

“Some of the re-delineation worked against PAS. How is this for the Malays? Seems it was more to favour party in power. What an admission!” wrote Ambiga. 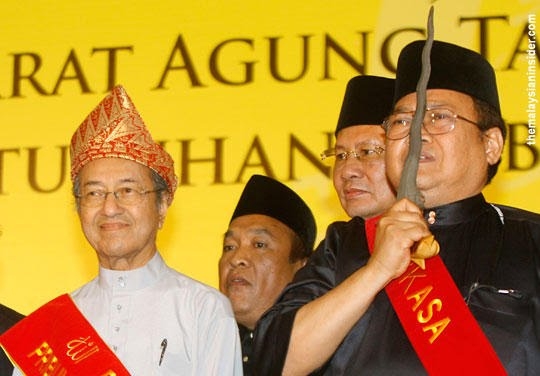 It must have been one of Kuala Lumpur’s best kept secrets.

The long-serving EC employee made his debut at the Perkasa Federal Territory chapter meeting yesterday, after signing up six months ago.

His reason for joining the right-wing group: Abdul Rashid wants to champion Malay rights and ensure they remain in the scheme of things after the next general election.

As Perkasa is widely seen as an offshoot of Umno, Abdul Rashid must mean Umno, but the ruling coalition lynchpin party’s name never came up during his speech or press conference.

“With my experience and knowledge in the EC, I will help Perkasa to achieve this,” said Abdul Rashid yesterday while  opening the Perkasa Federal Territory annual general meeting at the Kelab Sultan Sulaiman yesterday.

1 Response to Ex Election Chairman, who joined Perkasa to help keep Malays (UMNO) in power, is now with Parti Pribumi Bersatu Malaysia. Is he still with Perkasa?