Will the Police come knocking at your door to arrest you?

DIDN’T YOU SETTLE YOUR TRAFFIC SUMMONS?

THE POLICE ARE COMING AFTER YOU AT YOUR HOME!

HOW TO SETTLE YOUR SUMMONS:

THIS WORKS. I HAVE SENT OVER MY I.C. NUMBER AND GOT “Tiada Saman dikeluarkan sehingga 23/11/13. Terima kasih.”

The reply is in Bahasa, but look out for the key word TIADA which means you do not have any summons. If you do, it will display WHERE, WHEN and AMOUNT. If you think your vehicle may have more than a couple of traffic summons, or you want details sent to your email, then do the following SMS:

1. POLIS SAMAN [identification card no] SEMUA
The number of replies that you receive is based on how many outstanding traffic summons you have incurred.
2. POLIS SAMAN [car registration no.] [your email]
You will get an SMS reply stating the email address given and you will receive an email giving the detailed summary of the outstanding traffic summons.
To subscribe to summons alert by sms type POLIS SAMAN ON.
To unsubscribe summons alert type POLIS SAMAN OFF.
Then send the SMS to DAPAT or to 32728. Source: Azman Armat and www.DAPAT.com 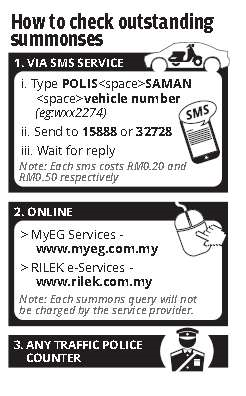 MAY IS ‘VISITATION MONTH’ FOR THE POLICE.

With 1,566,509 summons outstanding, which adds up to a lot of money, the Police will come to your door. 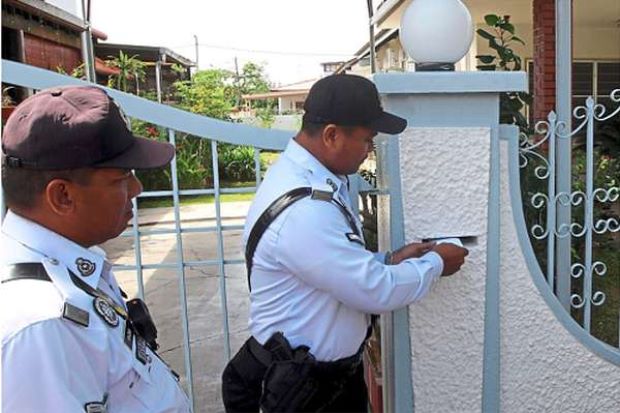 Nailed: Two police officers leaving a warrant of arrest at the house of a traffic offender in Malacca during Ops Warta last year. They will be launching the operation again next month.

KUALA LUMPUR: Police will be going after hundreds of thousands of hardcore traffic offenders when they kick off Ops Warta next month.

“To date, 2.49 million of the 4.09 million warrants of arrests have already been settled.

“Now we are looking at the remaining 39% (1.59 million),” he said at Bukit Aman yesterday.
…
Bukit Aman had also worked together with the EPF (Employees Provident Fund) and National Registration Department to track down the addresses of these traffic offenders.

KUALA LUMPUR: Ops Warta, the traffic police operation to trace and detain traffic summons defaulters, is just days away from a fresh launch to serve close to 1.6 million arrest warrants on defiant motorists.

Federal traffic police chief SAC Datuk Mohd Fuad Abdul Latiff said today that Ops Warta or Operasi Waran Tangkap will be launched soon to compel those who have chosen to ignore their traffic summonses to pay up outstanding fines.

He did not reveal the launch date but said it would be before the middle of next month. 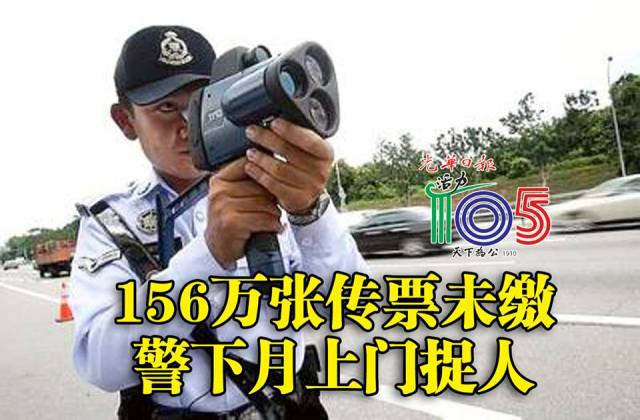 The national traffic police will next month launch a new round of “arrest warrant” to identify nearly 1.6 million outstanding arrest warrant for a traffic ticket master … http://bit.ly/1OdHHTD

By Fahirul N. Ramli | fnr@nst.com.my
“They are habitual traffic offenders, most of them have at least 15 unsettled summonses and more than two warrants of arrest.
“The police are going after all of them in a nationwide crackdown, so those with unpaid summonses are advised to settle them before getting nabbed in roadblocks, ” Khalid said.
…

Those deemed as habitual offenders were the ones with more than 15 unpaid summonses and more than two warrants of arrest.
…

DSP Mohamad Roy also said yesterday that the police managed to track down an offender with 28 outstanding summonses and four warrants of arrests in Taman Kledang Jaya. However the man, in his 50s, had passed away due to kidney failur­e three months ago.

Police mount first operation to round up traffic offenders

The operation commenced in Ipoh and saw traffic policemen going “door to door” to bring in motorists with more than two warrants of arrests and more than 15 unsettled summonses.

The first operation was conducted between 3pm and 6pm on Thurs­day.
…

“We are going ahead with roadblocks mounted nationwide to arrest errant vehicle users from next week.

“After being arrested at a roadblock, the motorist will be brought to the police station and if he or she refuses to pay the summons, the person will be released on police bail with one surety,” he said, adding that the police would then apply for a new court date for the individual to either challenge the case or plead for a lower fine

Police mount first operation to round up traffic offenders

Like Loading...
This entry was posted in Uncategorized and tagged arrests for not settling summonses, Checking Summons through SMS, HOW TO SETTLE YOUR SUMMONS:, Ops Cantas Khas Trafik., police, traffic offences, traffic police, transportation. Bookmark the permalink.

1 Response to Will the Police come knocking at your door to arrest you?