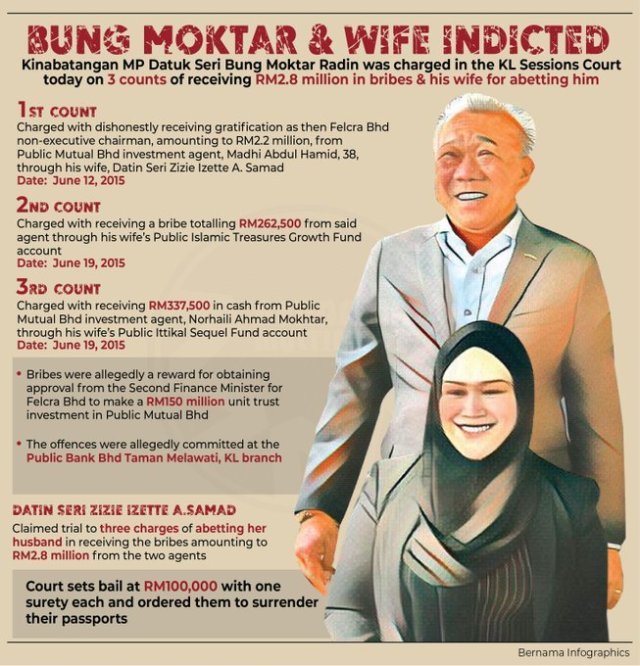 “I hope the prosecution will hand over all documents and witness statements to the defence team by the middle of December,” she said.

When met after today’s proceeding, deputy public prosecutor Allan Suman Pillai said they had handed over all relevant documents to the defence team.

In his judgement, Judge Mohd Nazlan Mohd Ghazali said that the charges against the duo do not appear to involve any novelty in regards to points of law.

On May 3, the outspoken Kinabatangan Member of Parliament pleaded not guilty at the Sessions Court to three counts of receiving a total of RM2.8 million in bribes. This was to enable Felcra Bhd to make a RM150 million investment in the unit trust products of Public Mutual Bhd.

According to the first charge, Bung Moktar, then Felcra non-executive chairman, is alleged to have accepted a RM2.2 million bribe in cash from Public Mutual’s investment agent, Madhi Abdul Hamid, 38, through Zizie Izette.

He is also accused of committing the act as an inducement to obtain approval from the Minister of Finance II for Felcra to make a RM150 million investment in Public Mutual unit trust products.

For the second charge, Bung Moktar was accused of taking for himself a bribe of RM262,500 in cash from the same individual, Madhi, through an account of the bank’s investment product Public Islamic Treasures Growth Fund (PITGF), numbered 044797816 and registered under the name of Zizie Izette, for the same purpose.

Bung Moktar is also accused of taking for himself a bribe of RM337,500 from Public Mutual’s investment agent, Norhaili Ahmad Mokhtar, 42, through a Public Ittikal Sequel Fund (PITSEQ) account numbered 044797824, registered under the name of Zizie Izette, for the same purpose.

The case, which was filed in accordance with Subsection 17(a) of the MACC Act, is punishable under Section 24(1) of the same Act, which provides for an imprisonment of not more than 20 years and a fine of not less than five times the amount of the bribe, or RM10,000, whichever is higher, upon conviction.

Actress and producer Zizie Izette pleaded not guilty to three counts of abetting her husband on the same offences, at the same place, dates and times under Section 28(1)(c) of the MACC Act; which is punishable under subsection 24(1), which provides for imprisonment of not more than 20 years and a fine of not less than five times the amount of the bribe, or RM10,000, whichever is higher, upon conviction.