Rosmah Mansor has denied that government funds allocated for her brainchild – the Permata programme – are abused.

“I would like to stress that whatever budget we receive from the government does not go into my handbag,” she said, leaving her audience in stitches.

The wife of Prime Minister Najib Abdul Razak mentioned this in her acceptance speech for the Lifetime Achievement Award for Leadership in Early Childhood Education in Kuala Lumpur. 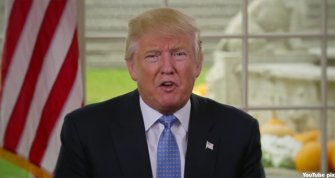 COMMENT The biggest joke was when Prime Minister Najib Abdul Razak was awakened by his wife, Rosmah Mansor in the middle of the night to make an important phone call to the US president-elect, Donald Trump.

It is hard to believe any story these days coming from either Najib or Rosmah. After all, we have heard too many far more incredulous stories in the past 10 years.

You cannot blame us, ordinary citizens, for simply being sceptical, especially since Najib’s explanation that he did not know some RM41 million been transferred into his account has been debunked by DAP parliamentarian Tony Pua; while Rosmah’s story of saving enough money from young to afford herself a diamond ring worth RM2 million has been talked about even by a pakcik taxi driver and a staunch Umno supporter himself whom I met in Tapah recently.

Who would believe the latest story about Trump wanting to speak to Najib urgently, since the generous Arab prince seemingly never existed in the first place. His identity has never been revealed, because according to an international economics magazine article which I have read, there is simply no Arab prince who is that rich to be able to donate that amount of money to an individual.

And, who would be able to save a million ringgit, even if the saving had started from one’s birth? One would have to save RM20,000 per annum from birth to the age of 50 just to have RM2 million, not taking into consideration the miserable bank interest.

“At about 2.30am, my phone rang… I received a call from a big shot, a friend of Datuk (Najib) who played golf (with him) when in New York.

“This person said, ‘Datin Sri (Rosmah), I am so sorry I have to disturb you this morning’.

“I wondered, ‘What was the matter, must be urgent’. If our phone rings after 12 (midnight), we think it must be something urgent, and emergency or whatnot. I said, ‘Yes, Tan Sri, what is the problem?’

“(The friend replied) ‘No, I want to tell you that president elect Donald Trump is expecting Datuk’s call in two hours time.

“I said ‘Eh, this is already 2.30am, you know. Two hours time is 4.30am’. That is the time which is nice to sleep right? How to wake up and start calling someone?

“I asked, ‘What’s the number?’ He said, ‘I don’t have the number’. He said, ‘I will call you in 10 minutes’. I couldn’t sleep, and waited until receiving the president elect’s phone number,” she said in her speech, a video recording of which has been uploaded on YouTube.

Trump won because of his human touch

Much to the audience’s amusement, Rosmah said Najib scolded her when she woke him up to tell him about the phone call, and had wondered if she was dreaming.

“‘What’s so important, so urgent?’ (Najib asked). (Rosmah replied) ‘You know president elect of America Donald Trump is waiting for your call. He expects it in two hour’s time’.

“(Najib asked) ‘Are you sure, are you dreaming?’ (Rosmah replied) ‘No I am telling you the truth.’,” she added.

After requesting her husband to set the alarm, Rosmah said she too set her alarm for the same time just to be cautious.

She added that Najib called the number at the fixed time, and Trump answered himself.

“When I heard (Trump answering), I thought, ‘Good this man, my husband need not go through 3,000 people before he gets to Donald Trump’.

“Usually, when we wish to speak to a big shot, the line is passed around, to the point it gets disconnected, and we have to call again,” she said.
..

Trump, she added, also asked Najib when the latter planned to visit the US, to which the prime minister replied, “Wait until you settle in and I will come. I would like to discuss a few things with you.”

Rosmah said she was delighted when Trump invited the family as well, saying, “Come over with your family, we can have lunch or dinner.”

Don’t trust what goes viral about me on Internet, Rosmah pleads 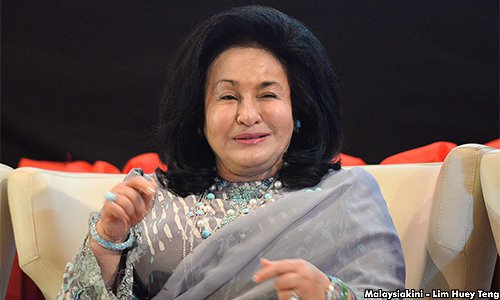 The prime minister’s wife Rosmah Mansor has advised netizens not to believe in whatever goes viral in the social media as coming from her as she does not have a Facebook or Twitter account.

Instead, she said, those who want to know about her can post their questions to her directly.

“I’ve never had a Facebook account. I’m not on Twitter either. I just have this antique Samsung (mobile phone). As long as I can make calls, accept calls and reply the SMS (short message service),” she said.

“If you read it (on social media), then you’ve been duped. If there’s anything (you want to know) about me, just ask me face-to-face. Straight to the point, don’t tell lies,” Rosmah was quoted as saying by Bernama.

She said this at the annual gathering of the National Sayang Squad, which was held in conjunction with the Umno General Assembly 2016 at the Putra World Trade Centre in Kuala Lumpur yesterday.

Rosmah said the existence of multiple fake Facebook accounts using her name had also motivated her to attend the keynote address given by Facebook chief executive officer Mark Zuckerberg at the CEO Summit 2016 in Lima, Peru, recently.

She said her excitement to meet with Zuckerberg so early in the morning also left her husband, Najib Abdul Razak, puzzled.

“I told him (Najib) that I want to ask Zuckerberg if there is any mechanism for him (Zuckerberg) to detect false Facebook accounts.

“I waited, but there was not question-and-answer session as he (Zuckerberg) had to rush to another place. I really wanted to ask him because Facebook also has its flaws,” she said.

Rosmah: Take care of your image if…

Rosmah is flying on a private jet plane….

Like other ‘girls’, Rosmah likes handbags. What about shoes?

Sarawak CM jokes, “Time for Najib to get an Iban wife.” Did anyone ask Rosmah?