HONG KONG: When a king cobra lunges at Chau Ka-ling as the door to its wooden cage falls open in her busy Hong Kong restaurant, she just laughs, then pulls it gently into her arms. 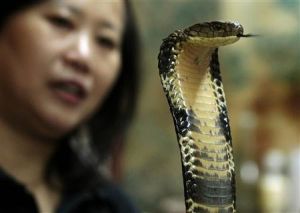 For Chau is a “snake king,” one of scores in Hong Kong who have through generations tamed snakes to make soup out of them, a traditional cuisine believed to be good for the health.
…………
Trained by her father in childhood to handle snakes, Chau, now in her early 50s, took over the business he founded, serving up a small bowl of soup for 35 Hong Kong dollars (2.8 pounds).

From boiling the essence out of snake, chicken and pig bones, to spicing it up with an array of ingredients that include five types of snake meat, the traditional southern Chinese snack can take more than six hours to make.
………….
Chau says she has no successors trained, and in fact has refused to do so.

“I’ve killed snakes for so many year, but actually I don’t want to. Because there are fewer and fewer snakes now,” she said. “But I can’t make a career change. There’s nothing else I can do.” 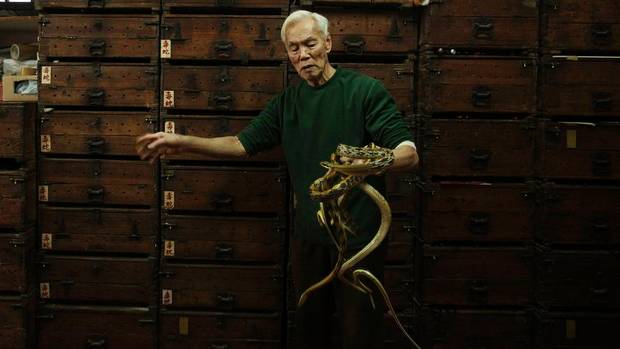 the most famous snake restaurant is the ser wong fun

Fancy trying something a little more exotic than usual? If you’re game and in Hong Kong, you should definitely head to the Ser Wong Fun restaurant. Famous for specializing in snake meat (yes, you read that right – snake!), this long-standing, quintessentially Hong Kong establishment has been patronized even by British governors (pre-1997). And just so you know, “Ser Wong” is Cantonese for “snake king”. Of course if you bothered to ask them, cooked snakes don’t feel particularly “royal” about themselves.

All in all, the meal here was a pretty novel and fascinating experience. Snake and food equal adventure – and thankfully a very pleasant one for me. I’d certainly recommend the place to any and all first-time travelers to Hong Kong – if only to experience this curiouser and intensely authentic side of the oriental city.

Chinese New Year, which starts on Feb 10 and ushers in the Year of the Snake, is a time when Hong Kong’s frenetic pace slows down and even the hardest working executives take time to enjoy traditional dishes such as “nian gao” sticky rice cakes.

8 p.m. – Get the tram or “ding ding” from outside The Pawn towards Central for dinner.

11 p.m. – Stroll up to Lan Kwai Fong, a strip of pulsating bars and clubs in the city’s Central District.

7.30 a.m. – Take a morning stroll through Hong Kong Park to the Peak tram terminus where you alight for a steep and historic journey to view the city’s spectacular skyline. 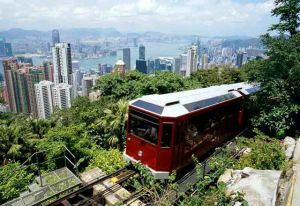 10.30 a.m. – If you are feeling energetic, stroll back down towards Hong Kong’s mid levels district along Lugard Road.

Read the rest of the article at

Hong Kong dads to get paternity leave for the first time

HONG KONG (Nov 26, 2012): Hong Kong fathers will be given three days’ paternity leave for the first time despite objections from employers after officials agreed to start drafting new laws Monday.

While mothers in the Asian financial hub are allowed 10 weeks away from work and fathers in the civil service are given five days, up until now there has been no provision for paternity leave for fathers in the private sector.

But Labour Minister Matthew Cheung said the labour advisory board, which is made up of employer and employee representatives, has given the go-ahead for a three-day statutory leave period.
………….

In the absence of any statutory parental leave allowances, most working fathers in Hong Kong are forced to cobble together holidays and sick-leave if they want to spend time with their newborns.

Hong Kong dads to get paternity leave for the first time

Prime rents across Hong Kong, including Central district where luxury retailers occupy the ground floors of towers packed with the world’s financial elites, grew by 21.8 percent in the year to June.

Hong Kong’s bustling shopping district of Causeway Bay has knocked New York’s Fifth Avenue off the top of the list of most expensive places to rent retail space in the world, new research shows.

The Big Apple’s most famous shopping street lost its top ranking for the first time in 11 years, in a sign of the strong demand for luxury goods from cashed-up Chinese shoppers, property services firm Cushman & Wakefield said.

“The highlight of this year’s survey was Hong Kong… notwithstanding slowing economic activity, retailers continued to see the market as the ideal launching platform into mainland China,” the firm said in a statement.

Causeway Bay saw a surge in leasing activity with a 34.9 percent hike in rental values to $2,630 per square foot, compared with $2,500 in New York. The Champs-Elysees in Paris climbed two places to third at $1,129.

“There has been the usual jostling for the top positions between Hong Kong and New York,” Cushman’s Global Retail Services chief John Strachan said.

HONG KONG, Nov. 6, 2012 /PRNewswire/ — Over 1,500 consumers across Hong Kong have spoken. Out of over 1,000 brands in Hong Kong, 7-Eleven is Hong Kong’s favourite brand. Following closely behind are Yahoo, Visa and Ocean Park. The independent research was undertaken by BDRC Asia in October 2012 and asked consumers aged 18-55 to vote for their favourite brands across more than 100 consumer product and service categories including banking, fashion, hotels, airlines, restaurants and electronics. The top ten brand list is compiled from the total number of individual votes across all the categories. The findings were revealed today at an event in Hong Kong by Superbrands, the world’s leading international brand marketing and promotional programme.