Oh no, Rosmah! They’re still after you!

KUALA LUMPUR — The wife of Malaysian Prime Minister Najib Razak has revealed that she has been a victim of cyber-bullying and the subject of fake news articles.

Mdm Rosmah Mansor, in her speech at the “Keep Our Women and Children #CyberSafe” seminar in Kuala Lumpur on Sunday (Oct 22), urged people not to be fooled by fake Facebook accounts that use her name.

“I do not know how to use the Internet… If you see my (so-called) Facebook page, it is not mine,” she said, while relating her personal experience with cyberbullying.

“I don’t have Facebook so please don’t be fooled… It is not mine. You all have been cheated.”

Madam Rosmah pointed out that people should not believe in the “funny postings” allegedly made by her on the Internet.

On cyberbullying, she said someone had once asked her how she was able to maintain her cool and calm despite all the unverified stories being spread around about her.

“I don’t own a smartphone, I’m still using an old antique Samsung phone.

“This to me is a bliss because I do not know how to use it.

“I think it is a blessing in disguise because all those false stories about me… I don’t know (about them). Hence, I don’t get emotional or feel depressed about them.” she said.
.

The report said the spending, made between 2008 and 2015, was based on new documents reviewed by the WSJ.

“Newly revealed documents show (Rosmah) has racked up at least US$6 million in credit card charges in recent years – despite having no known source of income beyond her husband’s salary.

“She is the only child of schoolteachers, hasn’t had a regular paying job in years and her husband, Prime Minister Najib Abdul Razak, is a longtime bureaucrat with an annual salary of US$100,000,” said the report.

It said the spending were made from London’s Harrods department store to Saks Fifth Avenue of New York and elsewhere.

According to the WSJ, the latest US$6 million expenses include the close to US$1 million spending by Rosmah which it previously reported.

Election campaign rally gets booklet with compilation of criticism and 2012 Australian newspaper column.

SUNGAI BESAR: Rosmah Mansor, wife of prime minister Najib Razak, has once again become the target of his opponents, with a booklet attacking her being distributed at an election rally last night.

The booklet, entitled Di Sebalik Tabir Politik Najib (Behind the Scenes of Najib’s Politics), contained accounts of lavish expenses, among other allegations.

It was distributed during a Pakatan Harapan ceramah in Dataran Tonggak here last night, and comes after Rosmah figured in news headlines after opposition criticism of her purported use of a luxury private jet for a trip to Ankara. 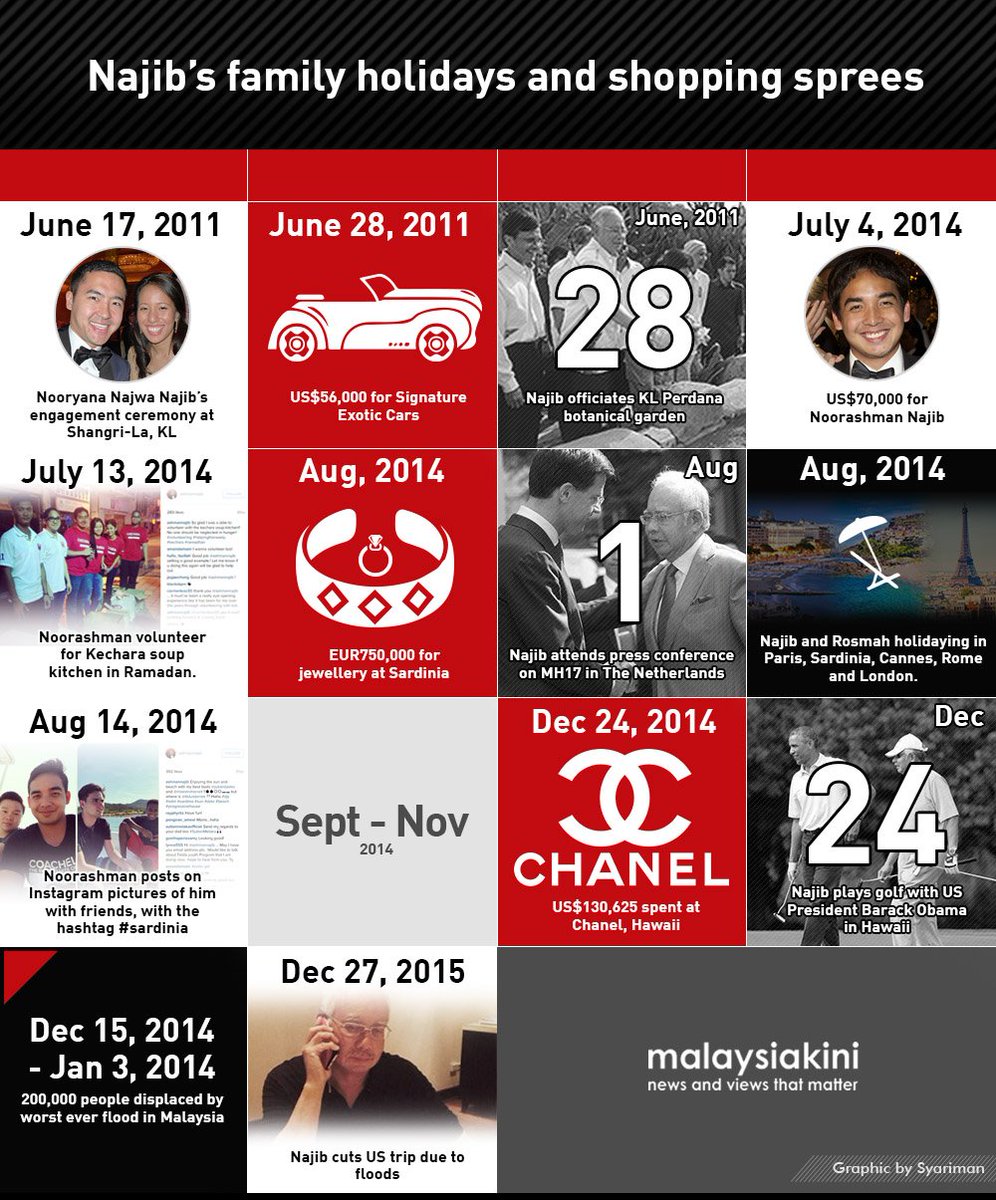 The shopping sprees alleged by The Wall Street Journal appear to match the dates in reports on Prime Minister Najib Abdul Razak and his wife Rosmah Mansor’s 2014 holiday in southern Europe.

Like Loading...
This entry was posted in Uncategorized and tagged Najib Razak, spending by najib and rosmah. Bookmark the permalink.

2 Responses to Oh no, Rosmah! They’re still after you!