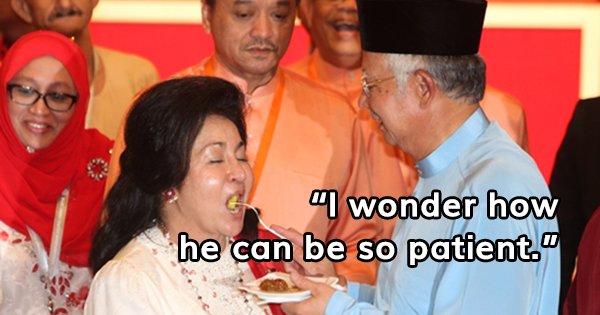 It is a common knowledge that the ‘first lady of Malaysia’, Datin Seri Rosmah Mansor, has a knack for coming up with an interesting set of opinions, especially about her husband, Prime Minister Najib Razak.
…

1. On PM Najib’s love for Malaysians

2. On Najib’s determination to improve the nation’s economy

3. On the importance of implementing GST

4. On her husband, Najib’s patience level

5. On her everlasting relationship with Najib Razak

It’s not easy being the wife of a Prime Minister. Besides the private jet rides and number of jewelries you could afford, sometimes, there’s an emptiness in the heart that can never be filled. Our very own first lady, Datin Seri Rosmah Mansor revealed to Sinar Online that she had a lot of things she had to sacrifice after being married to Datuk Seri Najib Tun Razak.

There were a lot of things she could no longer do. She mentions that she believed that this was God’s path for her. “When I got married to Datuk Seri Najib, there were a lot of things that I couldn’t do and never could do.” “As the wife of a country leader, I submit to God. As the white people would call it, ‘destiny’… that I was to be wed to a country leader,” during a guest interview on Bernama Radio. Additionally, she says that she had to let go her ambitions after marrying the 6th Prime Minister of Malaysia.

“Of course I dreamt to be successful in the field I was in at that time. My parents supported me and urged me to study the best that i could, and wanted to see their daughter to be successful.”

In that 30 minute interview, the wife of the Prime Minister told the current generation to not take for granted and waste their time on the luxury and pleasures you can easily obtain these days. She also urged youngsters to to love the country and in time, it will bloom into a great country. “Alhamdulillah Malaysia is now peaceful and successful.