The FRU has NEW weapons against rallies. That includes Bersih 5.

ONCE UPON A TIME, THE TASER WAS MENTIONED AS A WEAPON TO BE USED AGAINST BERSIH 4. The idea was abandoned.

WHAT WILL YOU FACE AT BERSIH 5?

The FRU has acquired 140 TMP and five VKS and flash launchers. All three weapons fire pepper balls which are said to be more effective than tear gas.

Will pepper balls be used during the Bersih 5 rally on Nov 19? 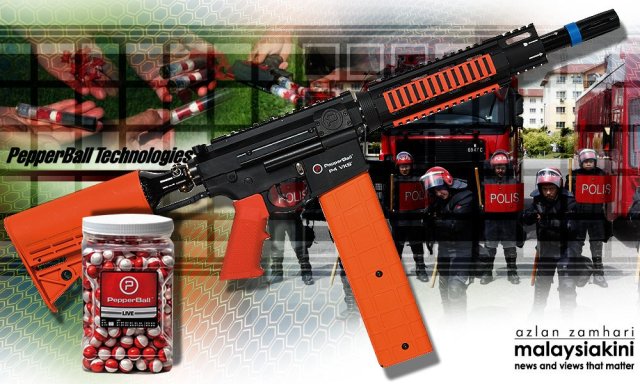 KINIGUIDE Have you ever played paintball? Did you get hit by one of its many colourful pellets?

It stings. It bruises. It ruins your clothes. Add chilli extract to the mix however, and you have a crowd control device in your hands.
…

They are spherical pellets similar to those used in the sport known as paintball, and come with compressed-gas powered launchers for the pellets.
…
According to Sinchew Daily, Utusan Malaysia, Berita Harian, and other media reports, the police bought three types of pepperball launchers.

What comes out of these launchers?

PepperBall Inc markets a range of projectiles for its pepperball launchers, including one known as ‘Live’, and the ‘Live X’ that is supposedly 10 times more potent.

Based on the company’s website and several demonstration videos, these pellets would break upon impact and disperse a puff of pelargonic acid vanillylamide (pava) powder.
…

The powder is meant to irritate a person’s eyes and respiratory system, in hopes of incapacitating him or encouraging him to leave the area. It also causes a burning sensation on the skin.
…

Is it going to be used during the Bersih 5 rally on Nov 19?

Yes. Wan Abdullah was reportedly asked this question, and he responded in the affirmative.

FRU gets new weapons to deal with illegal rallies

The Federal Reserve Unit (FRU) will be equipped with new weapons to deal with illegal rallies.

All three weapons fire pepper balls, which are similar to the pepper spray but are fired as projectiles.

FRU commander Wan Abdullah Ishak said the weapons are non-lethal and are better than tear gas.

“(They) are not dangerous against rioters, participants of illegal rallies and even our own personnel compared to tear gas.

“This is because with the weapon, it is easier to target specific individuals – like an aggressive rioter, without affecting other people and it is safe to use,” he was quoted saying.

@bersih2 @GlobalBersih #Bersih4 Ready to take a taser for Malaysia? For Clean & Fair elections? Stand up to threats by the police.

Will the police TASER you at Bersih 4? No, they’ll use just tear gas, water cannons and batons…

Like Loading...
This entry was posted in Uncategorized and tagged new weapons for FRU Police against rallies bersih 5, police, police and Bersih. Bookmark the permalink.