Posted on October 6, 2016 by weehingthong 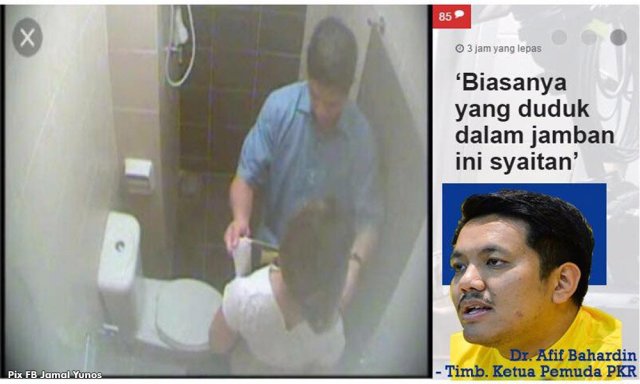 Sungai Besar Umno Jamal Md Yunos has responded to PKR’s criticism of his toilet stunt with a photograph of a toilet tryst.

The photograph was a subject of controversy in 2012 when Umno bloggers claimed the man with a woman in the toilet was PKR deputy president Azmin Ali.

Azmin, who is now Selangor menteri besar, had denied he was the man in the photograph.

However, Jamal revived the picture in a Facebook post, stating: “Look carefully who’s the devil in the toilet.”

“I agree with the PKR Youth deputy chief,” he added.

PKR deputy president Azmin Ali has denied claims in pro-Umno blogs that he was caught on camera in an extramarital toilet tyrst.

PKR deputy president Azmin Ali has denied claims in pro-Umno blogs that he was caught on camera in an extramarital toilet tryst.

Azmin was referring to pictures uploaded on blogs such as on papagomo.com, which are claimed as video stills of the act.

“I strongly deny this slander which are aimed at me and my family. This slander is being spread by media organisations controlled by Umno who are quoting from pro-Umno blogs,” said Azmin in a statement today.

He claimed that he was the target of a vicious series of recent attacks on his character.

He said this started with several former political allies questioning the paternity of his daugther, to claiming that he had insulting the Malay Rulers and now most recently, allegations that he had sparked the Bersih 3.0 chaos.

“I, my wife and daughter have performed a DNA test twice in July 1998. Both results proved that the allegations were untrue.

“But Umno is still repeating vicious allegations against me over the past 14 years,” he said.

He said that since this has failed, his enemies were trying to use a sex scandal as a way to destroy his political career ahead of the general election. – Mkini