The Muslim ‘Bomb-Clock Boy’: Will the Truth ever emerge?

MORE TALES IN THIS THAN WE THINK!

Two days after the Sept. 14 incident, President Barack Obama intervened by praising the boy, praising his clock-in-a-box, and inviting him to the White House for an October event. “Cool clock, Ahmed. Want to bring it to the White House? We should inspire more kids like you to like science. It’s what makes America great,” Obama tweeted, effectively suggesting that Irving officials were unfair to the Muslim boy.

The Muslim American boy championed by President Barack Obama is using his new worldwide fame to accuse Texans of racism and anti-Muslim discrimination.

“My dream is to raise consciousness against racism and discrimination,” he said at a New York press event with Turkey’s Islamist Prime Minister Ahmet Davutoğlu, according to an article in the Turkish newspaper, HurriyetDailyNews.com.

“Davutoğlu, who is New York for the 70th United Nations General Assembly, has met with 14-year-old student Ahmed Mohamed, who was detained at school by the police in Texas when a teacher thought a clock he had made was a bomb,” the newsite said.

“Speaking to reporters ahead of the meeting with Davutoğlu, Mohamed said he was excited to meet the Turkish prime minister [and] said he wanted to raise awareness against racism and discrimination,” said TodaysZaman, a Turkish newspaper that support’s Turkey’s Islamist governent.

The boy tweeted out a picture of his meeting with the prime minister, and his observant Muslim wife, Sare Davutoğlu, who was wearing an Islamic hood.

Muslim boy’s ‘cool clock’ is a fraud, says expert http://po.st/A63cSH  via @worldnetdaily and Obama thought it was great

Earlier this week, a 13-year-old kid named Coreco JaQuan Pearson sat down in front of a camera in the kitchen of his home in Grovetown, Ga. CJ had a lot on his mind: the 14-year-old Muslim student invited to the White House after he was wrongly arrested for building a clock thought to be a bomb; the young woman allegedly shot by an undocumented immigrant in San Francisco; the four Marines gunned down in Chattanooga over the summer; the Black Lives Matter movement.

President Obama, CJ feared, didn’t have his White House in order. It was a lot to distill into a short message — one that would catch fire among CJ’s 35,000 Twitter followers and large YouTube audience. But CJ was determined to make this quick — and needed little more than two minutes to make his point.

“Mr. President,” he began, speaking with a Southern twang. “When Kate Steinle was gunned down by an illegal immigrant, you didn’t do anything. You didn’t even call the family. You didn’t invite them to the White House. Is that okay? I don’t think so, Mr. President.”

Twenty seconds had gone by — but CJ was just getting warmed up.

“When cops are being gunned down, you don’t invite their family to the White House,” he said. “You never did.”

This was just the set-up. Then came the punch.

“When a Muslim kid builds a clock?” CJ said. “Well, come on by. What is this world that you are living in?” 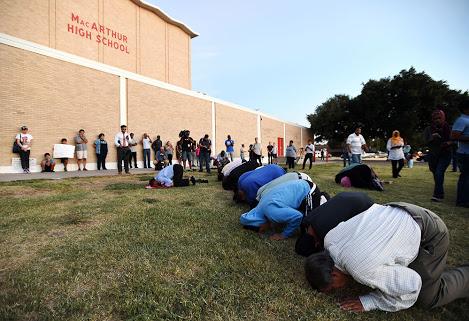 Blows the quiet little nebbish myth right to heck, he had a history of pranks and problems. Too bad we can’t hear the full story from the school.

Before he was put in handcuffs for bringing a “homemade” clock to school and became an overnight celebrity, Ahmed Mohamed “racked up weeks of suspensions” and clashed with authority while in middle school, the Dallas Morning News reported.

Despite rumors about the 14-year-old’s past disciplinary problems, Mohamed’s status as a minor has prevented the Irving Independent School District from speaking out on the matter.

@AtharHKhan @StaunchA Actually that may have been part of dad’s whole point for this stunt http://news.investors.com/ibd-editorials/092215-772291-did-muslim-clock-boy-perpetrate-hoax.htm …

Security: After a Muslim teen was arrested for bringing what looked like a bomb to school, police were ripped for “overreacting.” Supporters insisted he “invented” a clock for a “project.” But his only invention was the story.

Turns out that 14-year-old Ahmed Mohamed of Irving, Texas, never invented a clock, and had no reason to bring the suspicious-looking device to school. But everyone from Mark Zuckerberg to President Obama was fooled by what appears to have been a hoax designed to muster sympathy for Muslims accused of terrorism, while putting police on their heels and undermining the “see something, say something” directive for citizen vigilance. Here’s the real story:

There was no “school project” or science assignment to justify Mohamed bringing the device to school .

• Just three weeks into his freshman year, Mohamed was no “science whiz well-known by high school teachers for tinkering.”

• The “clock” wasn’t made from scratch but just the guts of a mass-manufactured digital clock, complete with AC cord and 9-volt backup battery connection.

With its exposed wires and lack of a face, the gutted clock looked like a bomb. It also sounded like a bomb: The alarm was set to go off during English class; the beeping startled the teacher who called police.

• When police questioned Mohamed, he wasn’t cooperative and was described as “disrespectful.”

• The police chief said the device was “intended to create a level of alarm; in other words, a hoax bomb.”

• Mohamed’s Sudanese father — a Muslim political activist involved in previous Muslim grievances — reportedly asked the cops to re-handcuff his son — so his daughter could take the photo that went viral.

• Mohamed tweeted: “Thank you fellow supporters. We can ban together to stop this racial inequality.”

• The family’s spokesperson is the Council on American-Islamic Relations, a terror-tied group that in 2006 sued US Airways for kicking several Muslim activists off a flight for behaving suspiciously and rattling passengers — a stunt that looks eerily similar.

The sister of the boy who brought a suspected hoax-bomb to his Texas high school said she was suspended from a school in a prior bomb scare. Her suspension occurred in 2009 while she was attending middle school in the same district.

Lesley Weaver, a spokeswoman for the district, said school officials can’t release any information about the 18-year-old sister’s episode because the Sudanese parents won’t sign the Family Educational Rights and Privacy Act, The school has already sent the form to the immigrant Sudanese parents, but they won’t sign it, she said.

The sister is named Eyman Mohamed.

“I wish we could…. provide more information to the media,” said Weaver, whose school district and local police force are now facing worldwide claims that they unfairly targeted the sister’s brother — 14-year-old Ahmed Mohamed — after he was detained Sept. 14 on the suspicion that he had brought a hoax bomb into the school.
…

The sister claimed after the arrest that she had been suspended from a school for several days.  “I got suspended from school for three days from this stupid same district, from this girl saying I wanted to blow up the school, something I had nothing to do with,” she said, without providing evidence or proof.

The episode occurred around 2009, she said. The scare happened in “my first year of attempting middle school in America. I knew English, but the culture was different, the people were different,” Eyman said.

“I got suspended and I didn’t do anything about it,” she said.

“When I heard about Ahmed, I was so mad because it happened to me and I didn’t get to stand up, so I’m making sure he’s standing up because it’s not right. So I’m not jealous, I’m kinda like—it’s like he’s standing for me.”

Already In The Juvenile System

Mayor Reveals Truth About His Family 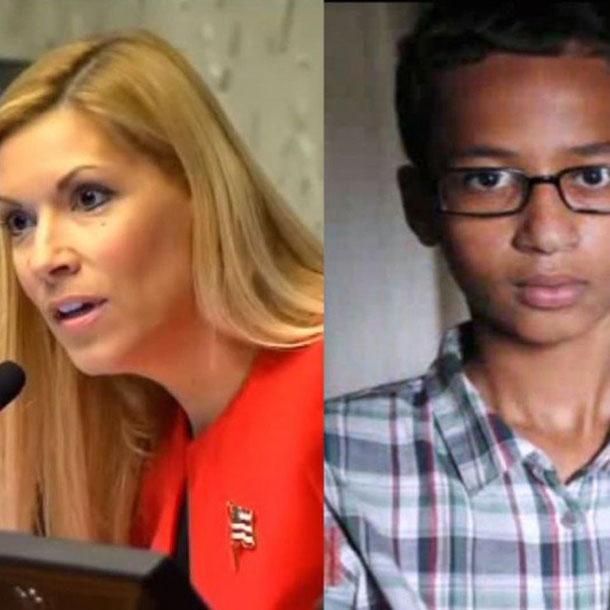 Media coverage on Ahmed “Bomb-Clock” Mohamed has been remarkably one-sided, with the Mohamed family and the media spinning a tale of Islamophobia and overreaction.

However, in an appearance on Glenn Beck’s The Blaze TV last night, the mayor of the city where Mohamed goes to school painted a starkly different picture. Among other revelations were her claims that the Mohamed family had stonewalled her and seemed more interested in talking with the Council on American-Islamic Relations and related groups than with city officials.

Irving, Texas, Mayor Beth Van Duyne said that, since Mohamed is a juvenile, they cannot release the records of what caused police to arrest him. She says that the family has refused to allow those records to be released, according toTownhall.com

“The (Irving) school district, a number of times, has asked the family to release the records, so that you can have the balanced story out there,” Van Duyne said. “The family is ignoring the request from the ISD.”

The mayor said the records would “help to describe why it progressed as it did.”

“Nobody is going to walk in and say, ‘Oh you’re a 14-year old child, you’re totally cooperating, we have all the answers we need, let’s arrest you,’” Van Duyne said, adding she had information that Mohamed was being “passive aggressive” and “non-responsive” when police questioned him.

. #AhmedMohamed & his “clock” was not only fraud but it was also a dry run. Read this http://commonconstitutionalist.com/current-events/the-muslim-clock-boy-is-a-set-up/?utm_campaign=shareaholic&utm_medium=twitter&utm_source=socialnetwork … 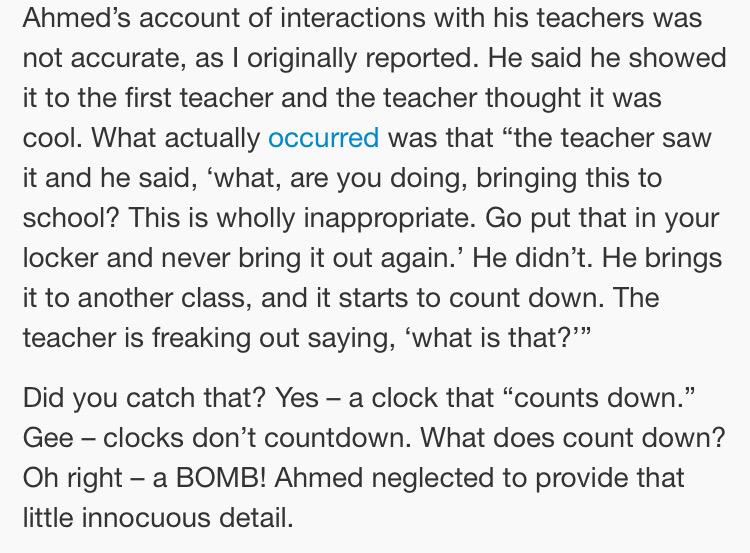 Glenn sat down with the mayor of Irving, Texas and a security expert on his T.V. program Monday night, to discuss the story of Ahmed Mohamed, a 14-year-old boy who was arrested after bringing a homemade clock to school last week.Once again, the media dropped the ball and got the story all wrong.

“You will change your mind once you have all of the facts,” Glenn said.

First, Glenn described the story as it came out last week, and who could be against this?

“A young, clean-cut Muslim teenager is trying his hand in a science project. He makes a homemade clock, goes to school. Instead of praise for his invention, he gets arrested and suspended from school. Even when the police knew that it wasn’t a bomb, they still arrested him,” Glenn said. “He’s just another victim of Islamophobia in America.”

Like many people, Glenn said the story tugged at his heart and he was about to voice his own support for the teenager. But then, the facts came out.