The Haze: From Indonesia with ‘Love’..

Posted on September 7, 2015 by weehingthong

THE INDONESIANS ‘LOVE’ US SO MUCH THAT THEY CAN’T WAIT TO SEND US THEIR HAZE.

#Haze may return as soon as March, experts say http://bit.ly/1RVV6Qb 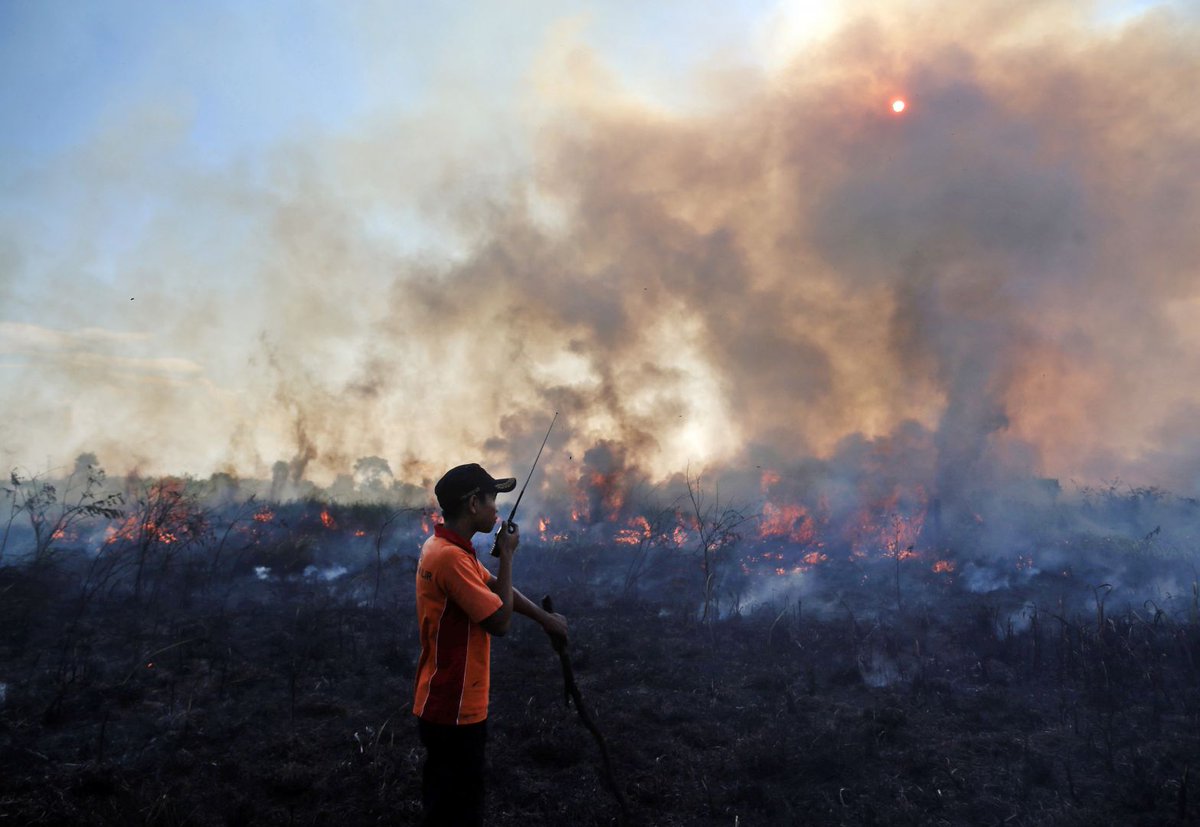 Efforts to stop Indonesian haze fires may not work for 2016 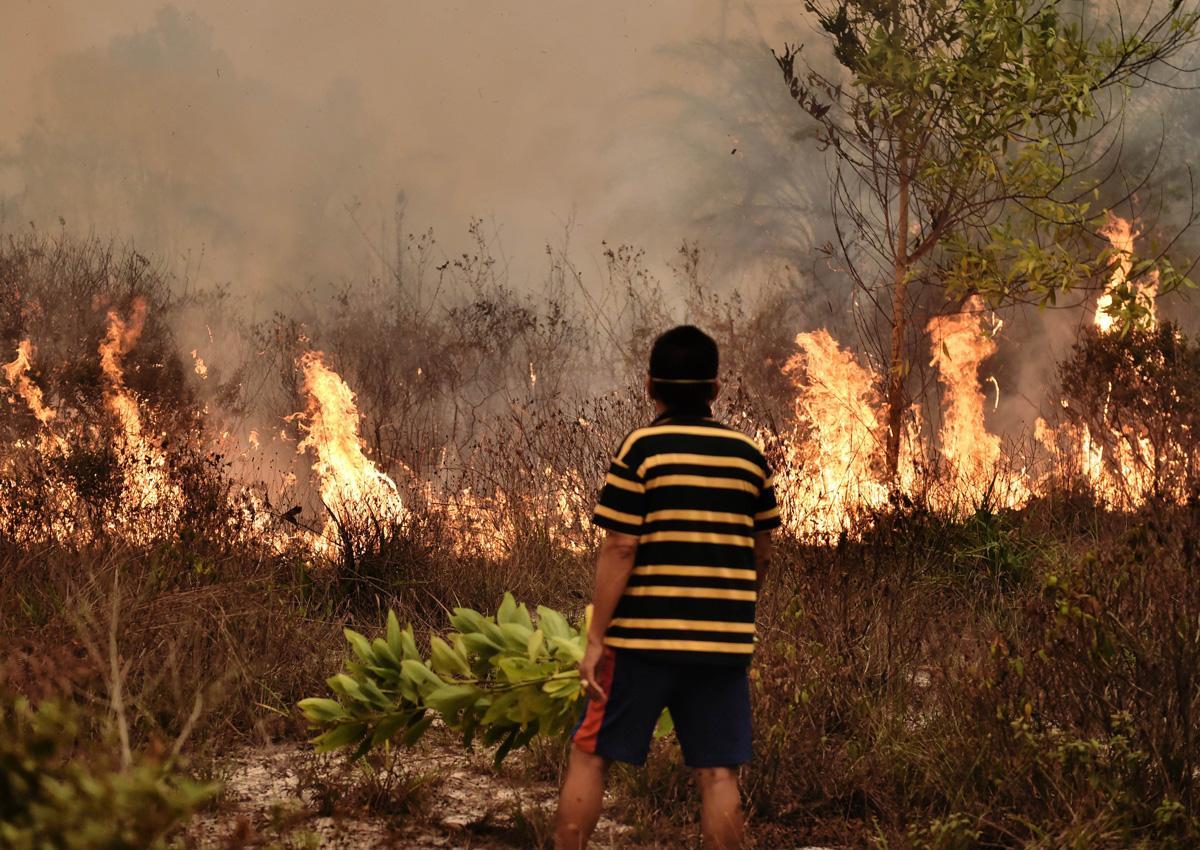 BARCELONA – South Sumatra’s governor, Alex Noerdin, is adamant there will be a “significant reduction” next year in fires on deforested and peat land in his province.

Those fires have contributed to the haze crisis choking South-east Asia almost annually.

But many experts believe fires in Indonesia are likely to start up again when the rainy season ends in March. They say not enough has been done yet to head off the risks.

Slash-and-burn clearance of land – much of it to plant oil palm, and trees to make pulp and paper – is the main culprit fueling the fires that smoulder deep underground in peat. They have pushed up pollution levels, disrupting daily life from Indonesia to Singapore and Malaysia.

Who is responsible for starting the fires is unclear, although a finger is often pointed at small-scale growers of the palm that produces cheap, edible oil.

Mansuetus Alsy Hanu, national coordinator for Indonesia’s Palm Oil Smallholder Union, said his members are often unfairly blamed, and better mapping of the land would show some fires break out on larger holdings.

Still he admitted that financial pressure on small growers pushes them towards slash-and-burn clearance.

“Using fires is the cheapest method to prepare a plantation,” he told a recent discussion on the Indonesian fires on the sidelines of the Paris climate change talks. “When you have no money, you go (for) the cheapest way.”

Better access to bank credit and government support for growers could help alleviate the problem, he added.

Jack Board ‏@JackBoard 3h3 hours ago

These are the types of canals Jokowi wants built around fire-prone plantations to stop #haze http://bit.ly/1FNBnyH 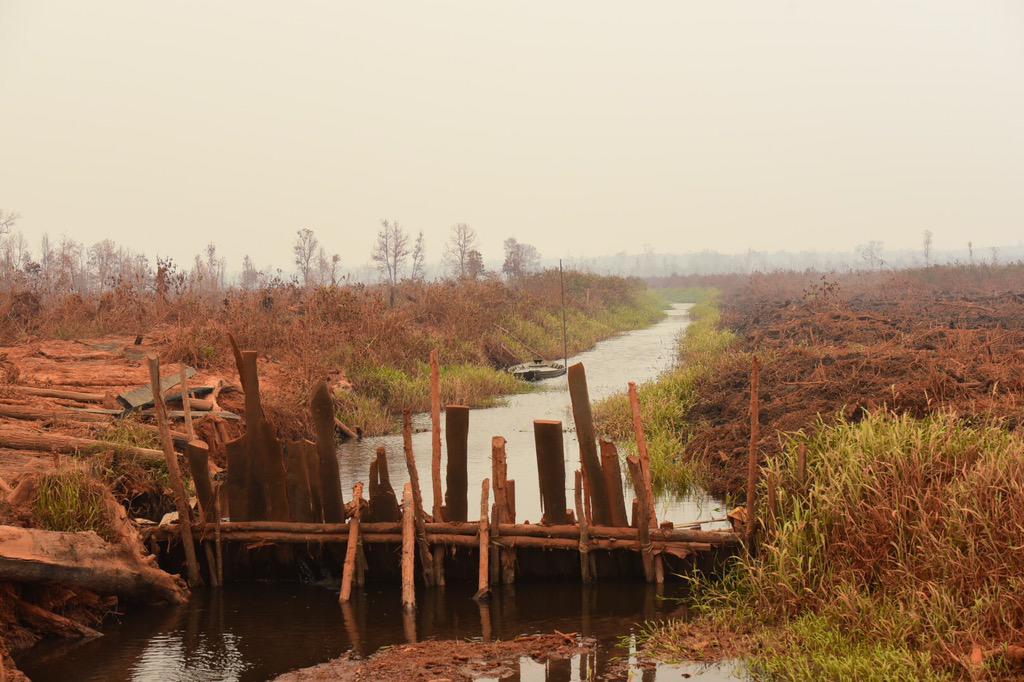 Haze crisis set to be ‘one of the worst on record’ http://ebx.sh/1FNX01A 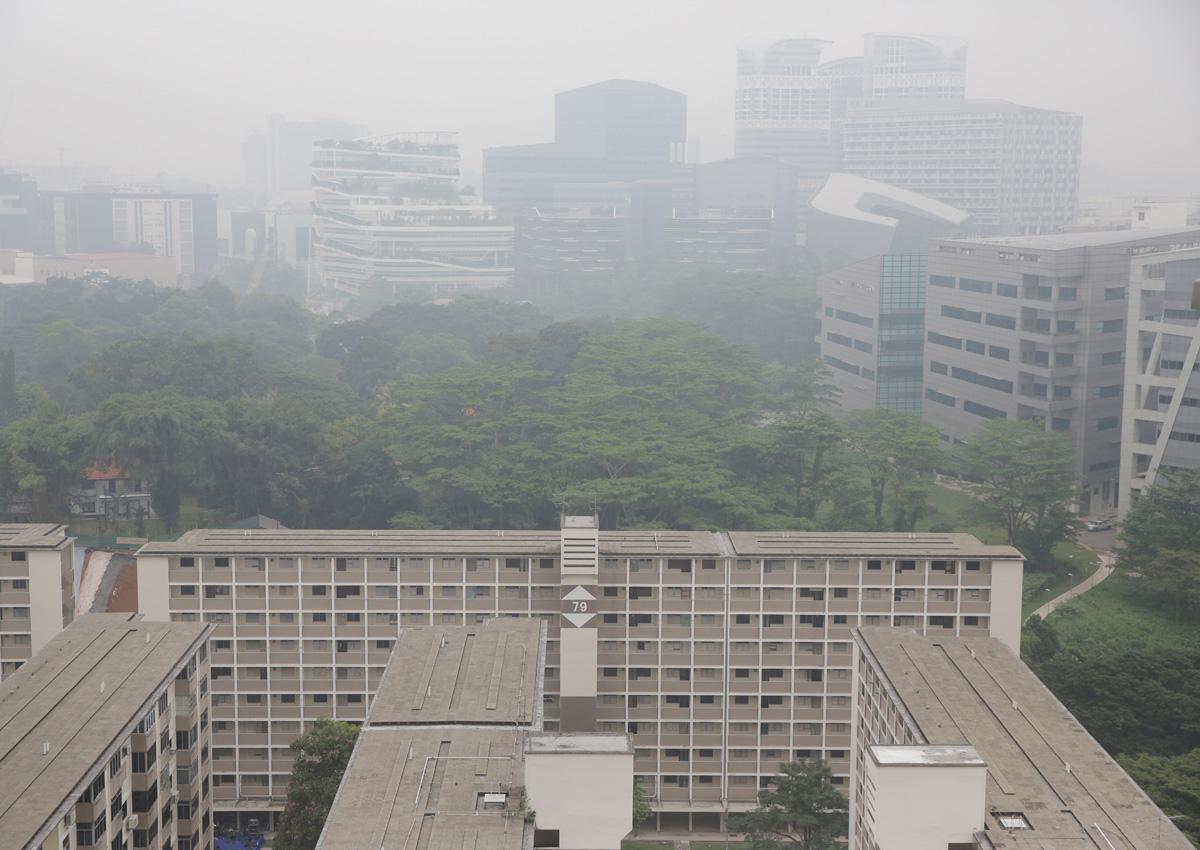 Palangkaraya, the capital of Central Kalimantan – one of the hardest hit by smoke from raging forest fires in Indonesia – yesterday had a Pollutant Standards Index (PSI) level that hit 1,936. In Indonesia, a PSI reading of 350 and above is considered hazardous.

Jack Board ‏@JackBoard 5h5 hours ago

Spotted these buffaloes wandering through the smoke and burning plantations #haze http://bit.ly/1FNBnyH 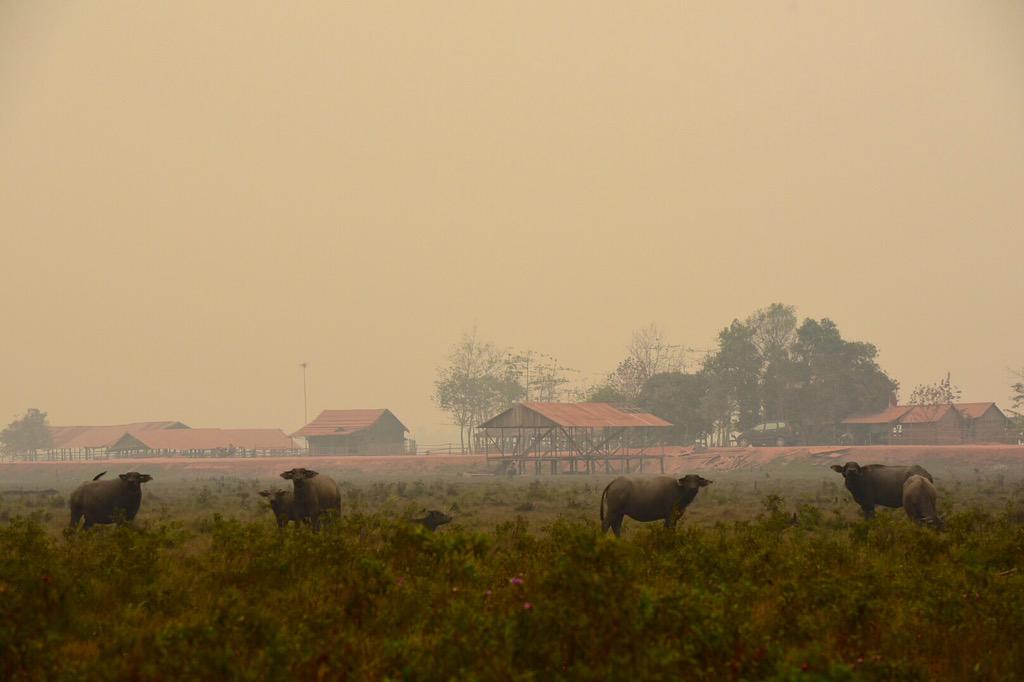 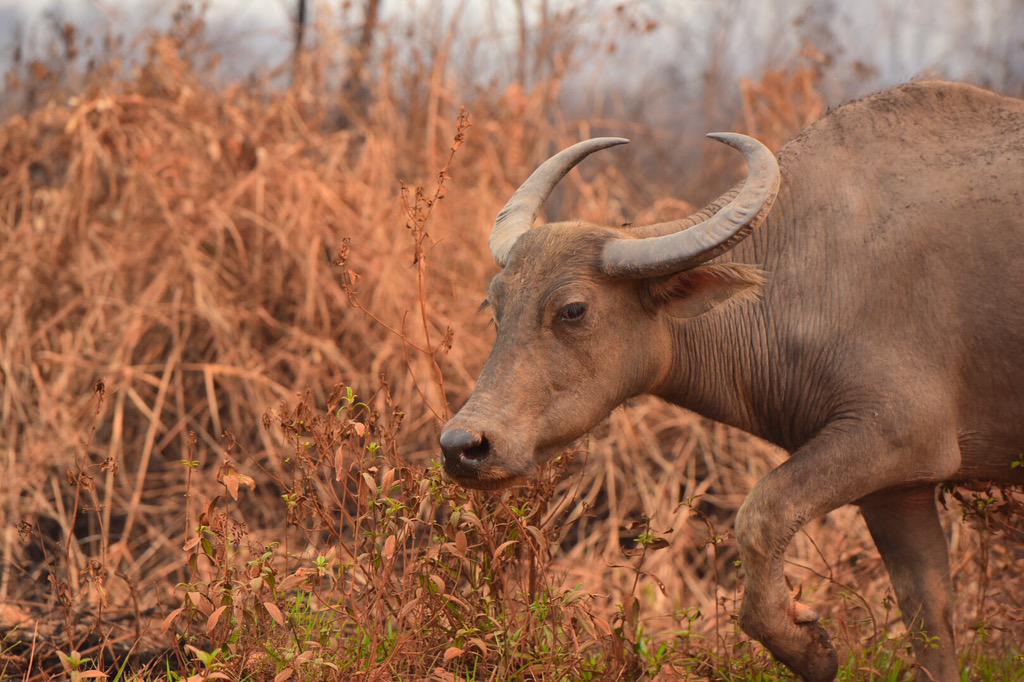 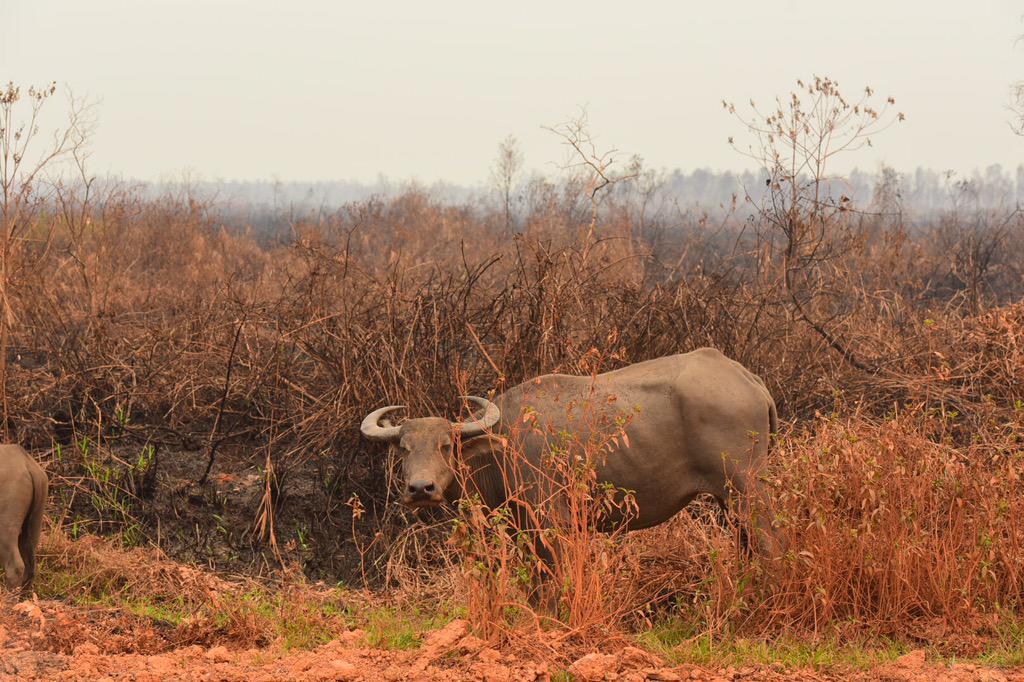 Dear Indonesia, thanks for supplying “fresh air” to Malaysia..Can u see how high the air quality is?!! #Haze #Jerebu

Now I can’t even see Telekom Tower from here due to the worsening & persistent haze. Terima kasih Indonesia 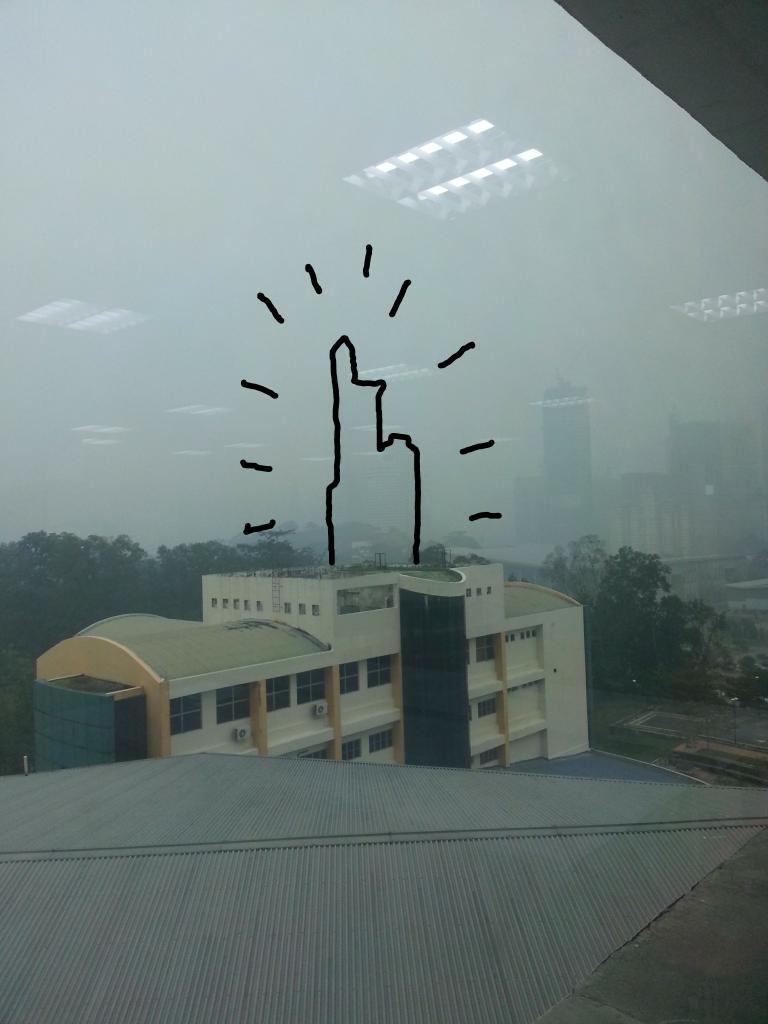 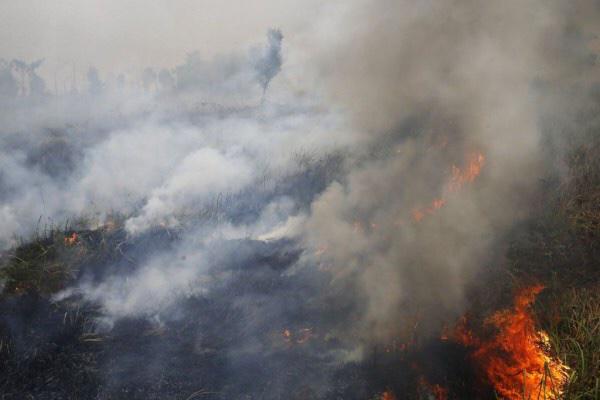 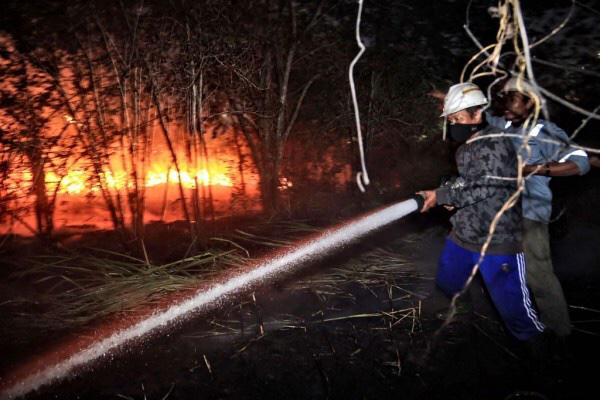 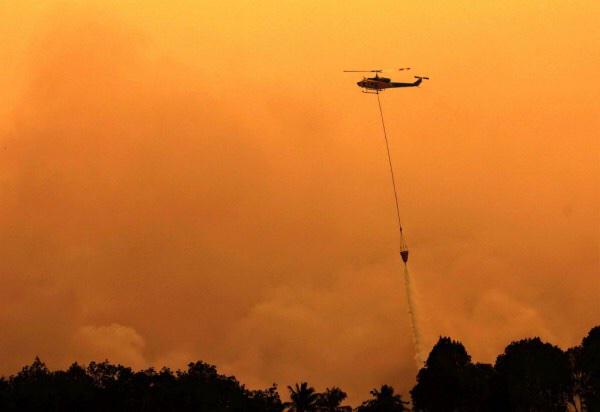 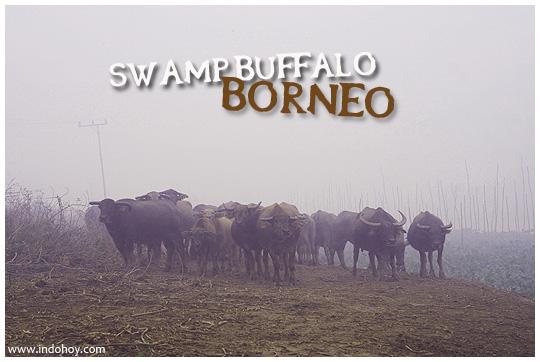 Indonesia has enough resources, does not need Singapore’s help in fighting haze for now http://str.sg/Z6wk 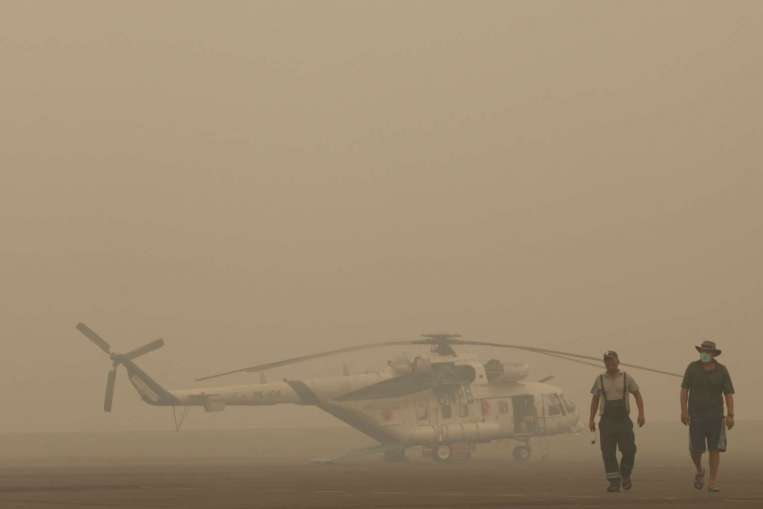 S’pore volunteers to fly to Indonesia to help give out N95 masks http://tdy.sg/1VuRLWH  #haze 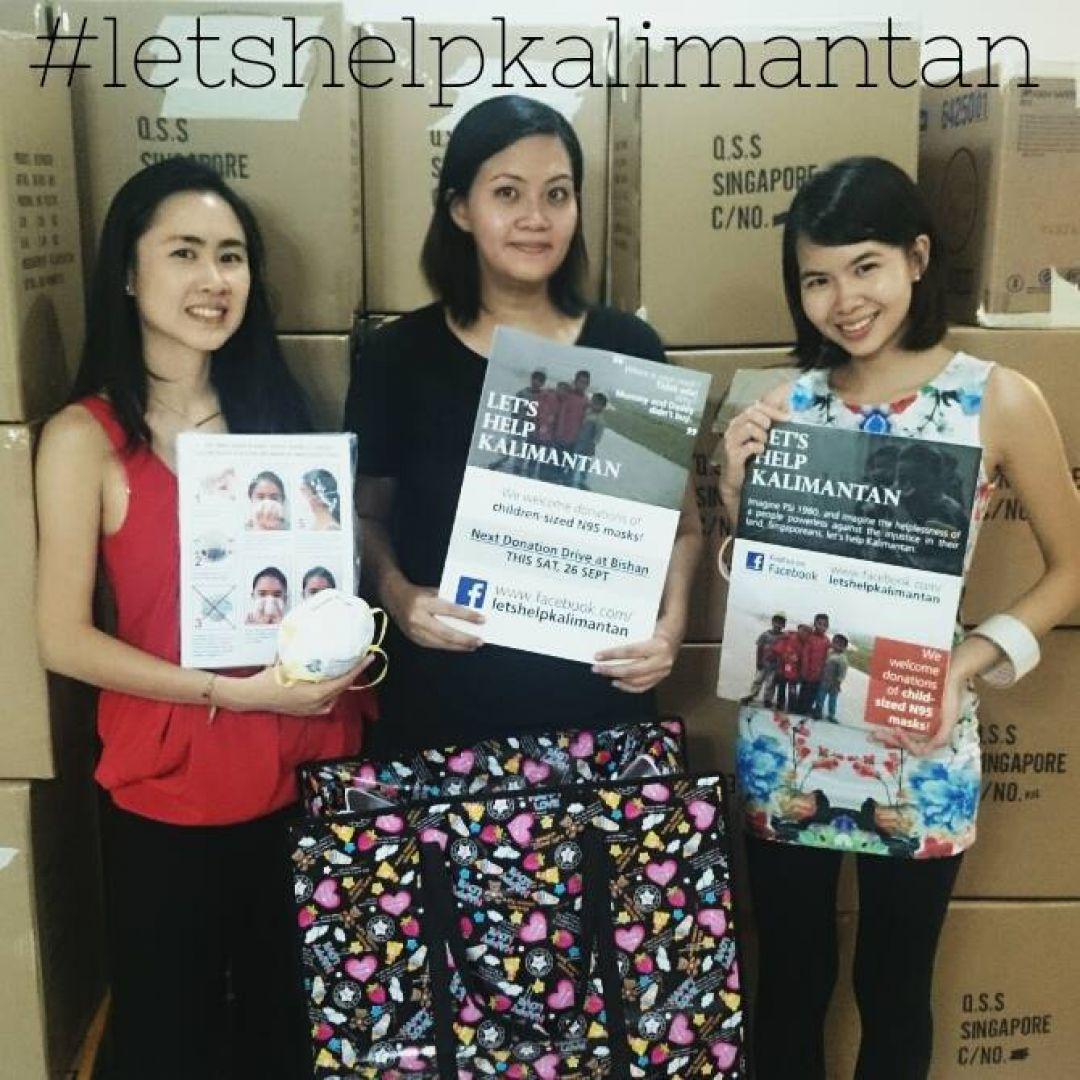 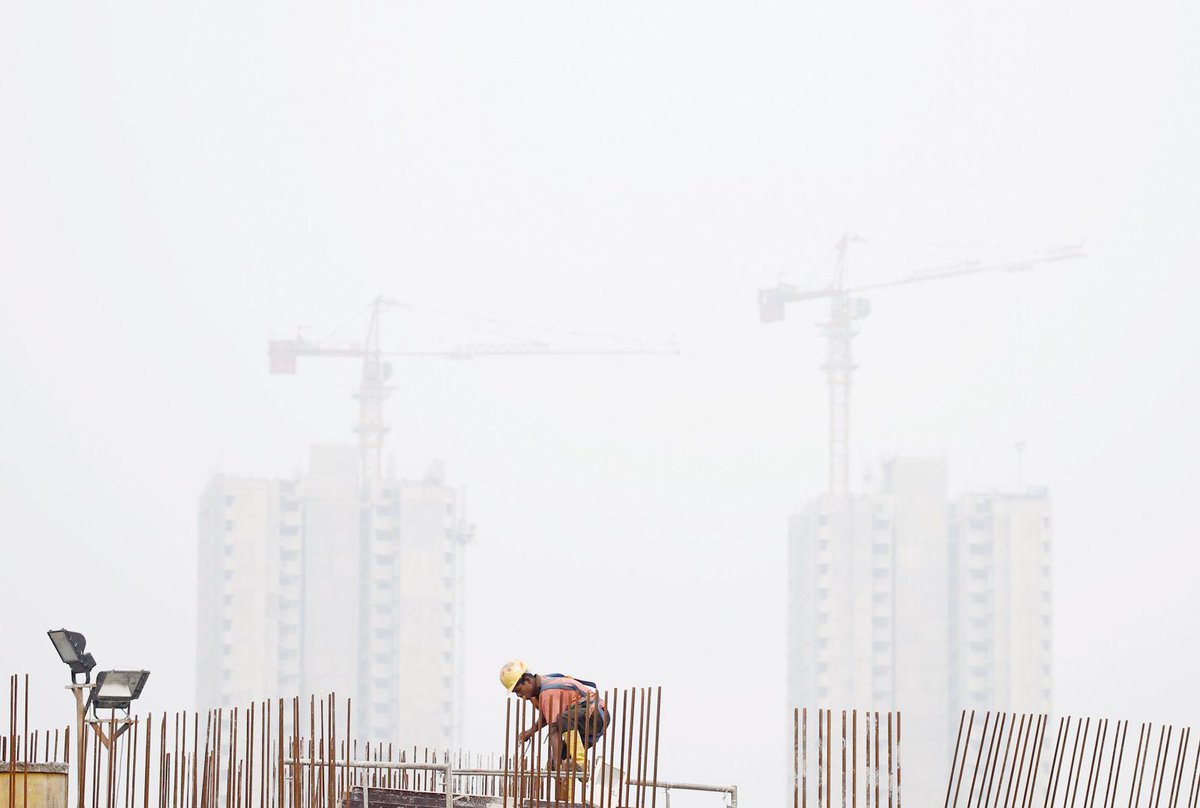 A construction worker climbs over reinforcing bars on a building site as high-rise apartment buildings behind him are shrouded by haze on Sept 30, 2015. Source: Reuters

SINGAPORE — As the haze continued to cast a pall over businesses in the tourism and hospitality sector here, the National Environmental Agency (NEA) has issued a notice to another Indonesian company, directing it to take fire-fighting measures.

The company PT Bumi Mekar Hijau is the fifth to receive a preventive measures notice from the NEA under the Transboundary Haze Pollution Act.
…
Last week, the NEA issued a preventive measures notice to four Indonesian companies suspected to be causing the haze, and requested a fifth with an office here to provide more information, putting into action the powers of the Transboundary Haze Pollution Act for the first time since it was passed last year. 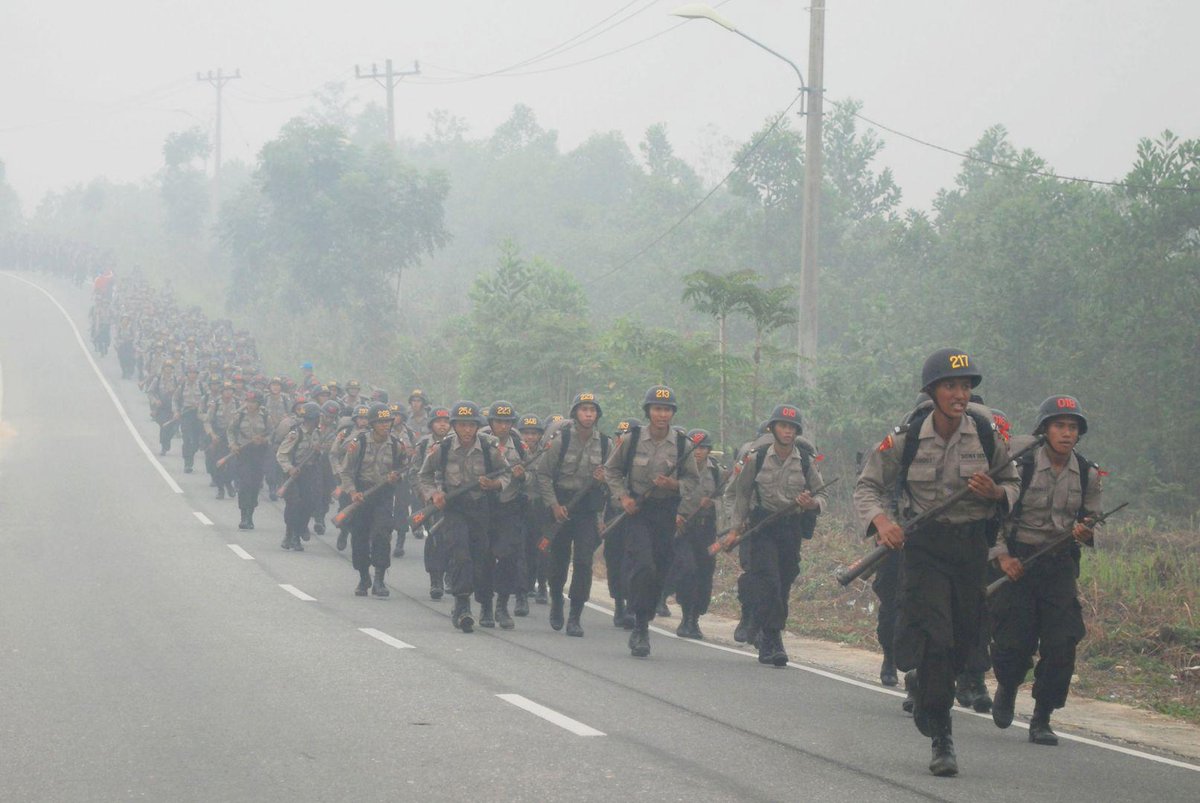 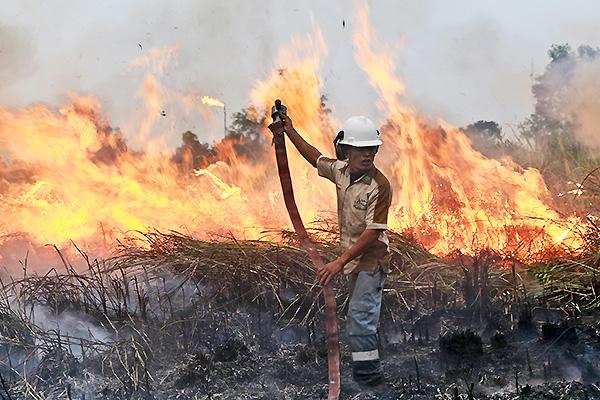 Jack Board ‏@JackBoard 2h2 hours ago

#Haze API reaches 977 in Palembang. On this construction site most workers don’t have a mask http://bit.ly/1KSJFC0 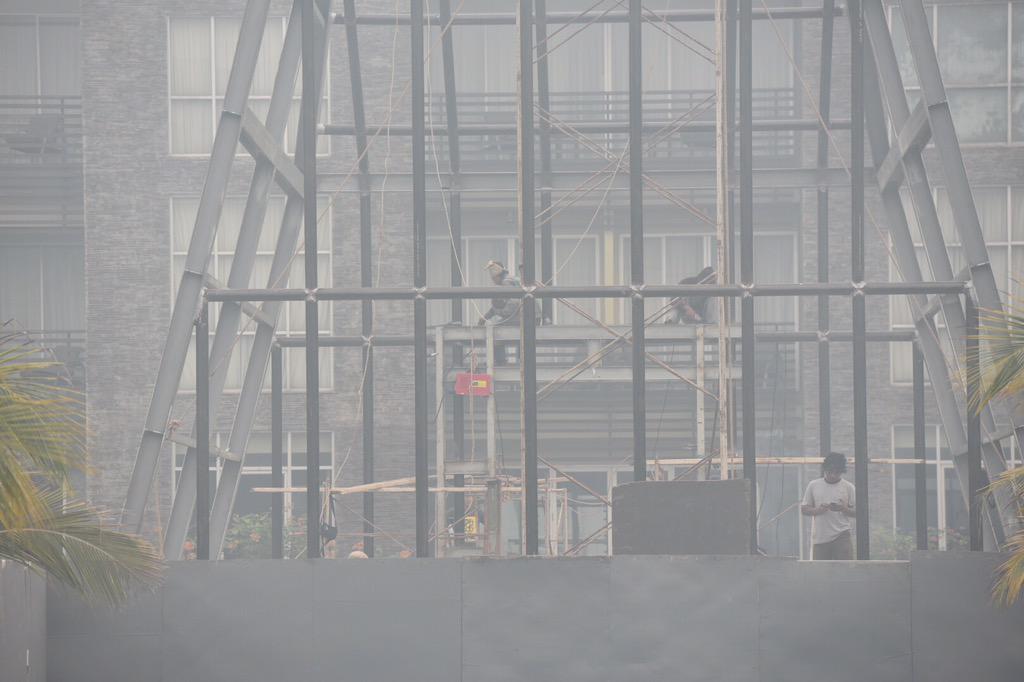 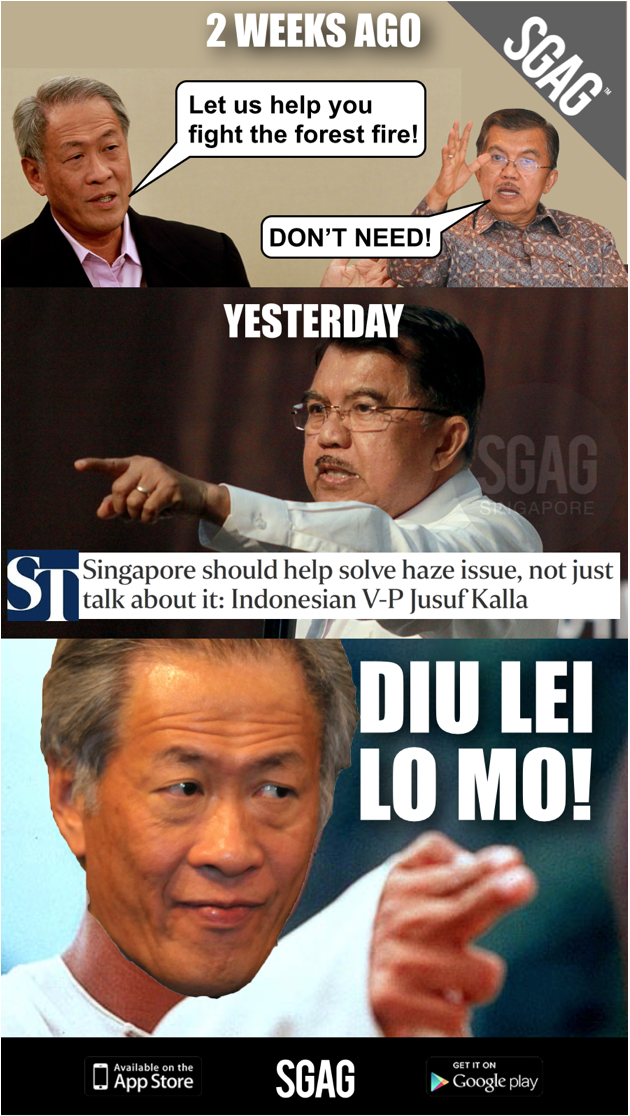 The worsening air quality in Riau province in Sumatra prompted the Indonesian government to declare a state of emergency. 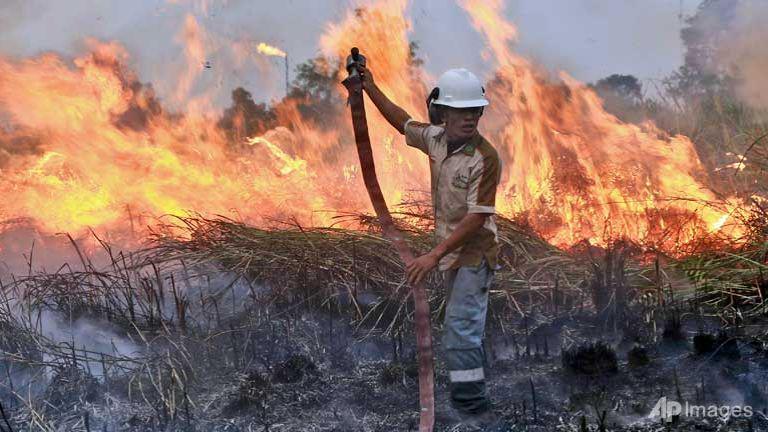 The worsening situation in Sumatra, west of Java, prompted the Indonesian military to step up efforts to extinguish the fires and assist residents facing health issues caused by the smoke.

An assessment is being made to determine if more troops should be deployed, Indonesian Environment and Forestry Minister Siti Nurbaya Bakar told Channel NewsAsia.

The government is serious about putting out the fires in Sumatra and Kalimantan but that it would take up to three weeks, she added.

More than 1,000 Indonesian troops will be sent to the provinces of South Sumatra and Jambi, two of the main hotspots, Indonesia’s National Disaster Mitigation Agency (BNPB) said.

If necessary, the agency would also send in additional helicopters to help water-bomb fires.

“We have mobilized national resources to put out the fires,” newly appointed BNPB chief Willem Rampangilei said in a press release.

TOO LITTLE, TOO LATE… 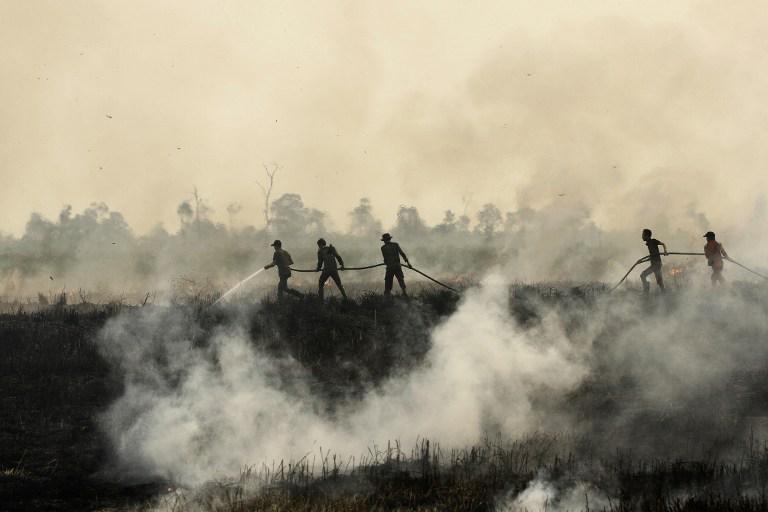 Indonesia is investigating 10 firms over worsening forest fires that have created a blanket of smog over Southeast Asia, threatening them with sanctions if they are found responsible, a government minister said on Tuesday.

The thick haze from Indonesia’s Sumatra and Kalimantan islands has forced the repeated cancellation of flights in the area and pushed air quality to unhealthy levels in neighboring Singapore and Malaysia.

The minister named only one of the 10 firms under investigation, a small private company called Tempirai Palm Resources. It was not immediately possible to reach it for comment.
…

The heavy smoke from slash-and-burn clearances often comes from the islands of Sumatra and Kalimantan, where large forest concessions are used by pulp and paper and palm oil companies, some of which are listed in Singapore.

The companies blame smallholders for the fires, but they have been criticized by green groups for not doing enough to stop the haze or the rampant deforestation and destruction of carbon-rich peatlands in Indonesia. 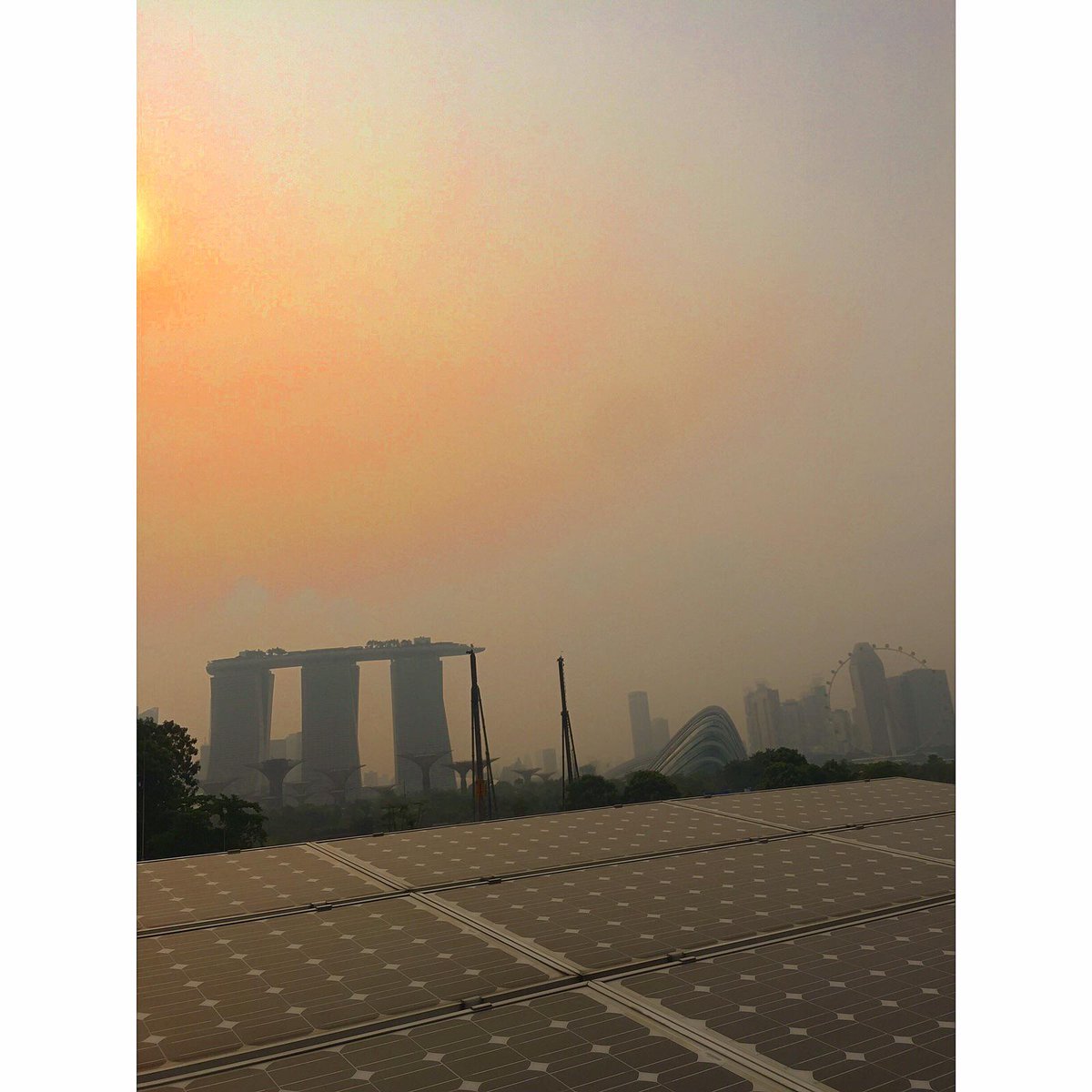 Thick haze back in southern Sarawak

KUCHING: Southern Sarawak is once again blanketed by thick haze after about a week of relatively clear sky.

The air pollution index (API) for Samarahan, 10km from here, was an unhealthy 102 at 2pm yesterday.

In the city centre, the API was 87 in the morning but visibility plummeted to 1.5km by noon.

As the day wore on, the API in Sri Aman – the worst affected by haze in the country last month when the API reached 129 – hovered in the high 80s. 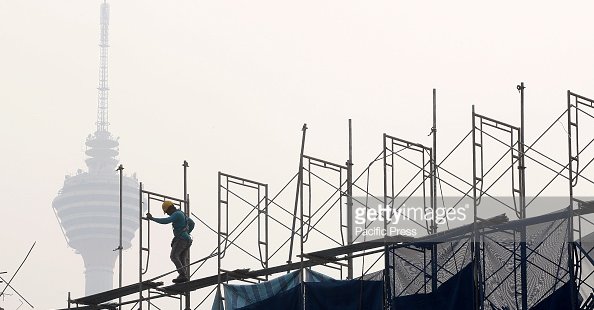 A PROMISE IMPOSSIBLE TO KEEP…

Indonesian President Joko “Jokowi” Widodo warns individuals and plantation owners in Sumatra not to carry out land clearing activities by burning the forests from next year, or they could face legal action. 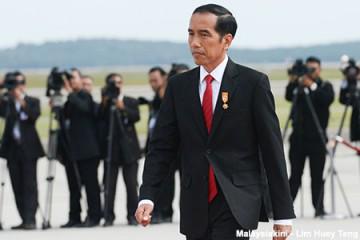 Jakarta (dpa) – Thick smog from forest fires on Indonesia’s Sumatra has paralysed one of the island’s airports, officials said Tuesday.

At least 36 flights to and from the Sultan Thaha airport in Jambi province were cancelled Monday as visibility dropped as low as 90metres, said Sutopo Nugroho, spokesman for the National Disaster Management Agency.

Sutopo said pollution indices in the area had reached “very unhealthy levels.” Fire-fighting aircraft that planned to drop water on the fires were unable to take off, said Sutopo.

“I can hardly see see anything, especially in the afternoon,” said Iko Matusunia, a resident who lives near the Jambi airport.

She said the situation was worsened by the prolonged drought.

“Wells in this area have run dry and we have to buy water from vendors,” she said.

We are so lucky to be surrounded by all the ash and haze! Thank you Indonesia for helping out

The intensity of pollution produced by land and forest fires in Sumatra and Kalimantan continued to fluctuate over the weekend, putting the health of local residents at risk and disrupting activities in a number of airports on the two major islands.

On Sunday, as of 10 a.m. local time, the management of Sultan Syarif Kasim International (SSK) II Airport in Pekanbaru reported that there was no flight activity taking place at the airport, as the haze that blanketed the Riau provincial capital decreased visibility to only 300 meters.

SSK II officer-in-charge Hasnan Siregar said although the visibility had increased to around 1,000 meters by 9:30 a.m., most airlines had decided to cancel their morning flights to Pekanbaru over safety concerns.

“In fact, there should have been six flight arrivals from Jakarta and Bandung during that time,” Hasnan said. –

Country like #indonesia should pay damage to nearby countries which affect by #haze they create due their foolishness n low class citizen. 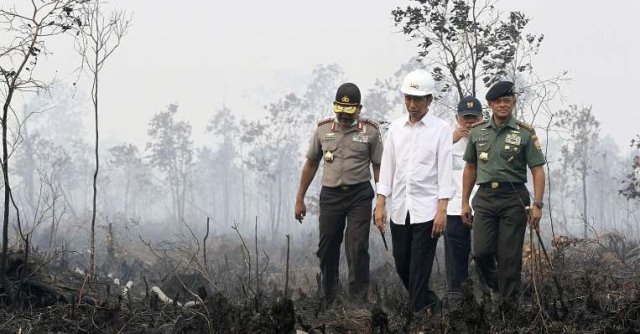 Indonesian President Joko Widodo yesterday (Sept 6) visited South Sumatra province for a first-hand look at forest fires that have been causing the worst haze in the past few days, as officials continue water-bombing and cloud- seeding efforts.

He was accompanied by the police chief, military chief, head of the National Disaster Management Agency (BNPB) and a senior Environment and Forestry Ministry official on a last-minute trip aimed at stepping up the urgency of putting out the fires.

“I’ve ordered the police chief to get very tough on companies that do not comply with the law… and instructed the Forestry Minister to revoke (their) licences once they are found guilty on criminal charges,” said Mr Joko, who arrived in Palembang where he was met by the province’s governor Alex Noerdin.

Fires in #Indonesia spike to highest point since Nov 2014 http://blog.globalforestwatch.org/2015/09/fires-heat-up-as-el-nino-develops-growing-health-concerns-as-haze-worsens/ … #melawanasap via @WorldResources 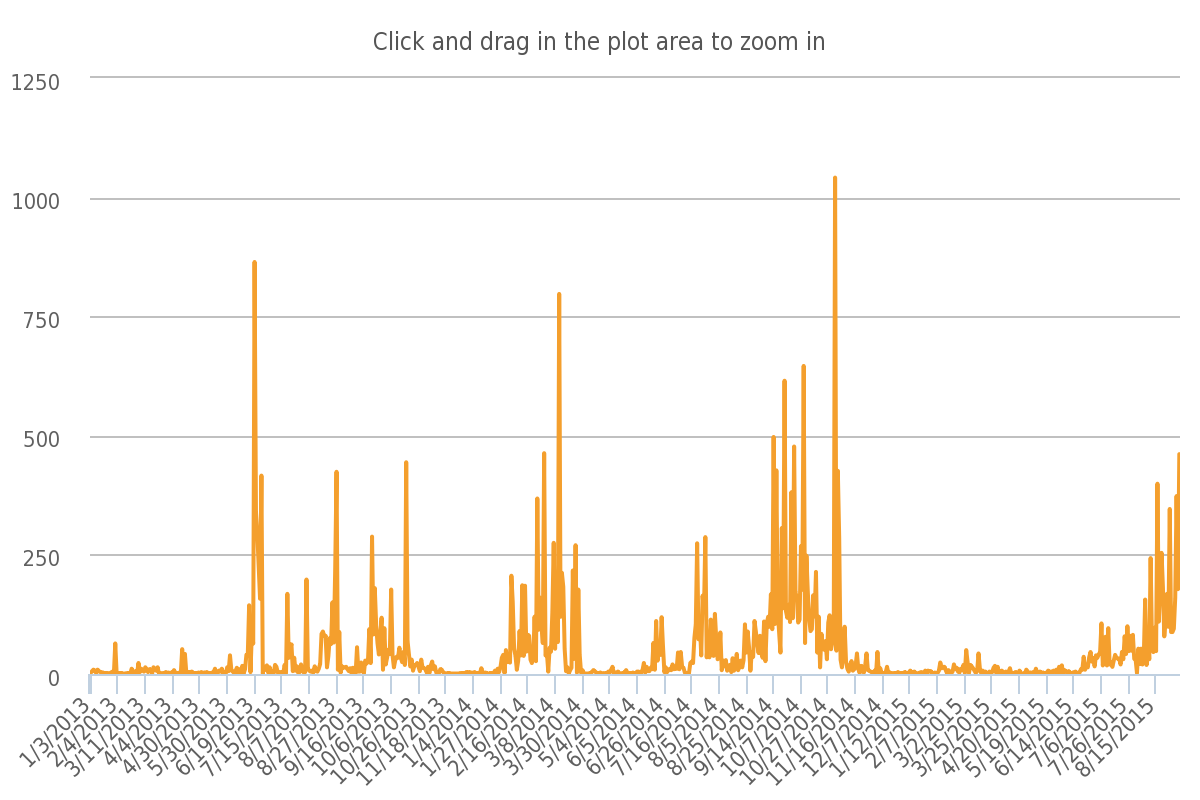 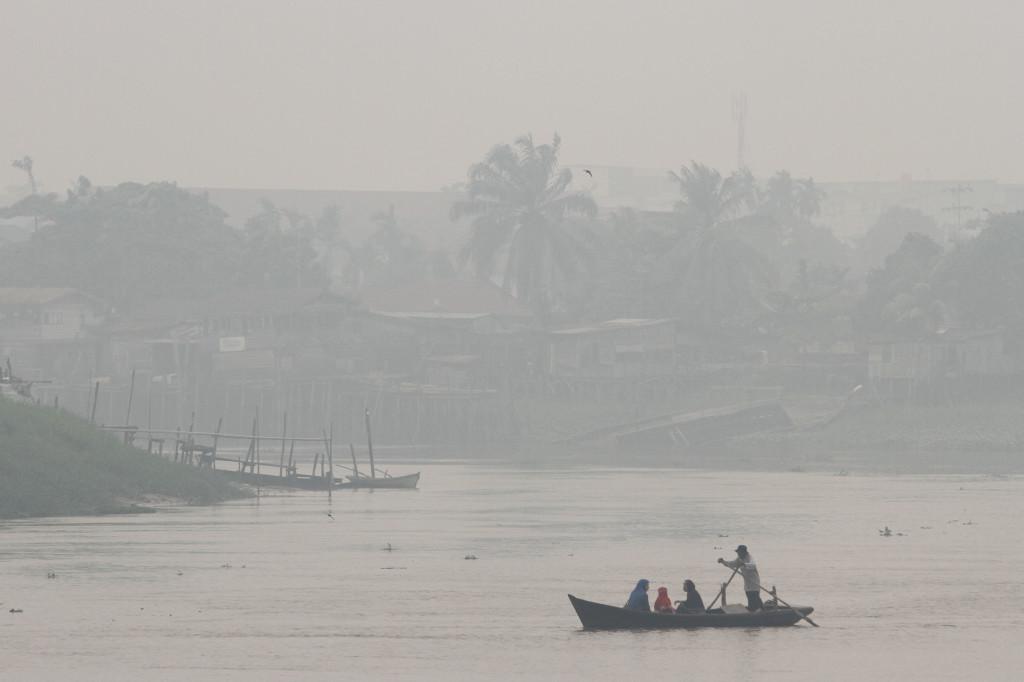 haze in Riau Indonesia has been very severe. help us, here we are shortness of breath, our eyes sore,@UN @ASEAN Why is Malaysia still talking to Indonesia about the haze? I thought this problem has existed for many many years. http://www.thestar.com.my/News/Nation/2015/08/27/Put-out-your-fires-fast-Wan-Junaidi-tells-Indonesia/ … 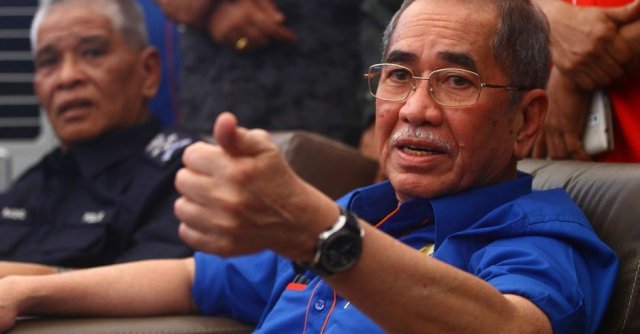 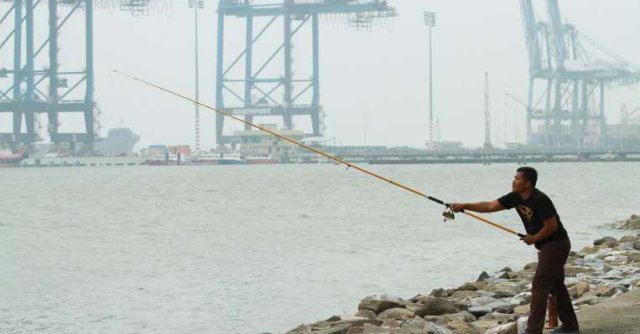 2 Responses to The Haze: From Indonesia with ‘Love’..