Dog in the trolley: At times, dog owners are unthinking and inconsiderate.

Posted on September 6, 2015 by weehingthong

I AM CHINESE. NOT A MUSLIM. A CHRISTIAN.

I like dogs but I don’t like the idea of a dog in a trolley. I don’t even like the sight of a dog sitting on a chair on the sidewalk of a coffee shop. It’s a matter of hygiene.

The photo attached in the post shows a dog sitting next to its owner’s groceries inside the trolley parked at one of the aisles in the supermarket.

theSundaily reports that in this instance, netizens were more concerned about hygiene than about religious sensitivity as the majority of those who were critical of the act were non-Muslims.

“I am a non-Muslim and also own a dog but even I know the dos and don’ts when it comes to situations involving pets – and trust me, bringing my dog to a supermarket or restaurant is a big DON’T,” the local daily quoted a netizen named Mary.

“Housepets are house-trained … not supermarket or restaurant trained! When pets are in strange unknown places, they might pee or poo out of fear,” said another netizen, Nelly.

Following the incident, TF Value-Mart issued a statement on Tuesday stressing that pets are not allowed on its premises.

“We at TF Value-Mart are regretful over the incident where a pet dog was photographed in one of our trolleys yesterday (Monday).

“We would like to clarify that TF Value-Mart does not allow pets to be brought into our premises,” the statement on Facebook read.

Can’t believe why there are stupid people like this to put their dog into the trolley.. People put food in there…. 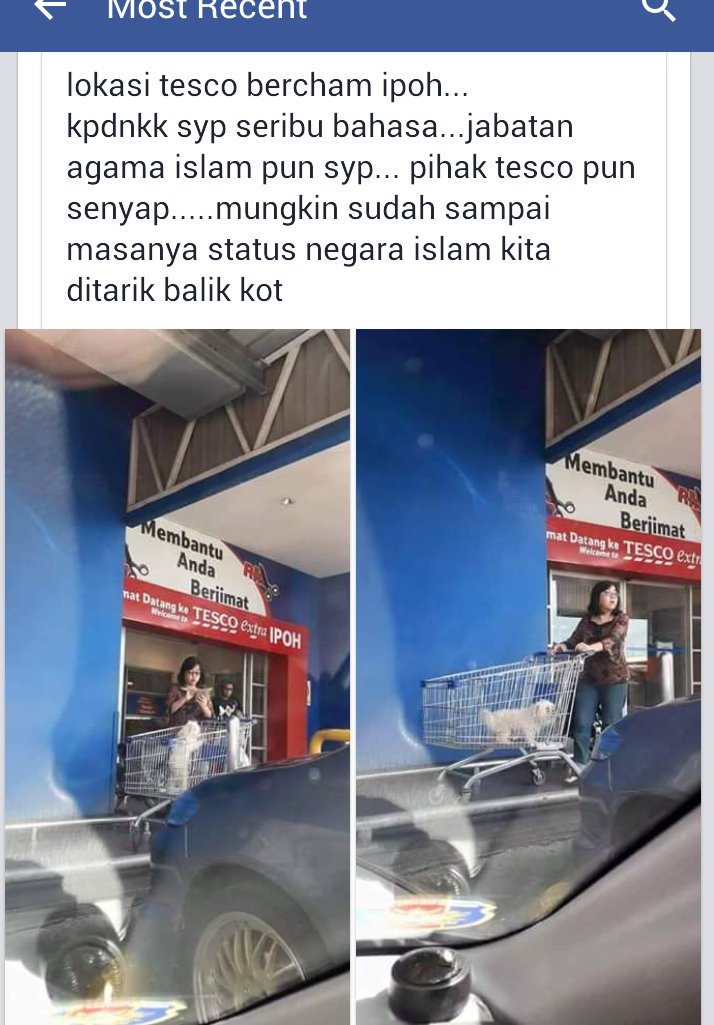 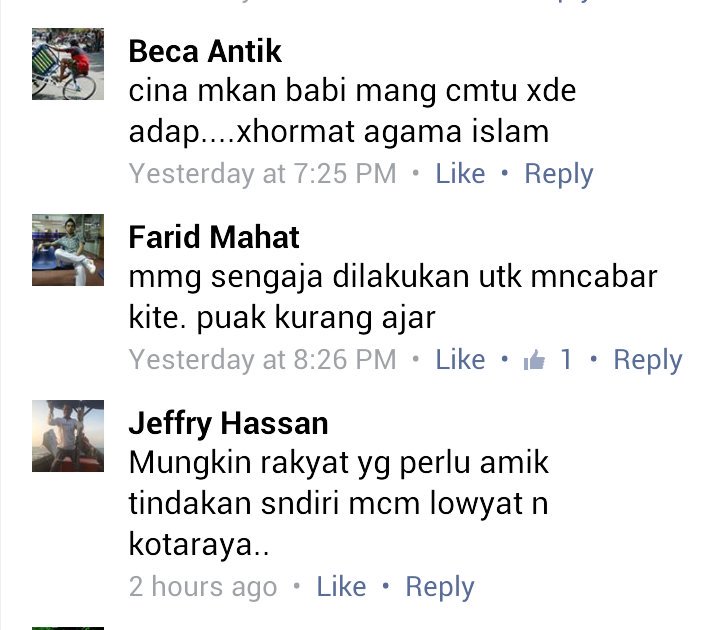 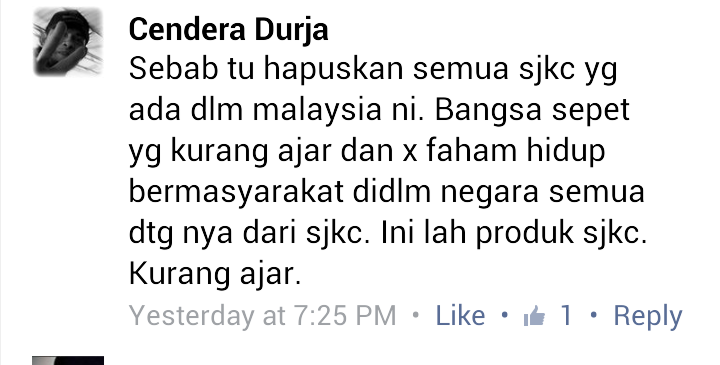 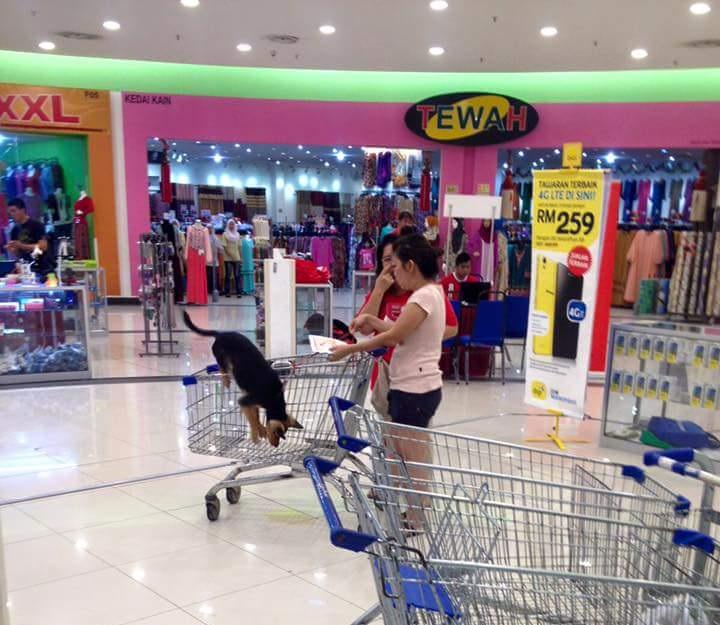 Pet must not enter the malls it! http://www.chinapress.com.my/node/652674
Translated by Bing

Please respect the sentiment of other users. This is not racism, racial or religious party but this was the guilt of individuals who are not concerned for the environment.

Pets are not allowed in the shopping mall, even more unclean animals on the religion of Islam.

This scene takes place in the Tesco Extra Plentong. Hope this will not happen again.

Thanks to the Tesco Plentong for having taken cover all trolley to ensure the purity and cleanliness of other users.

@tescomalaysia This is Tesco Pelentong. IS DOG ALLOWED INTO Tesco premise? 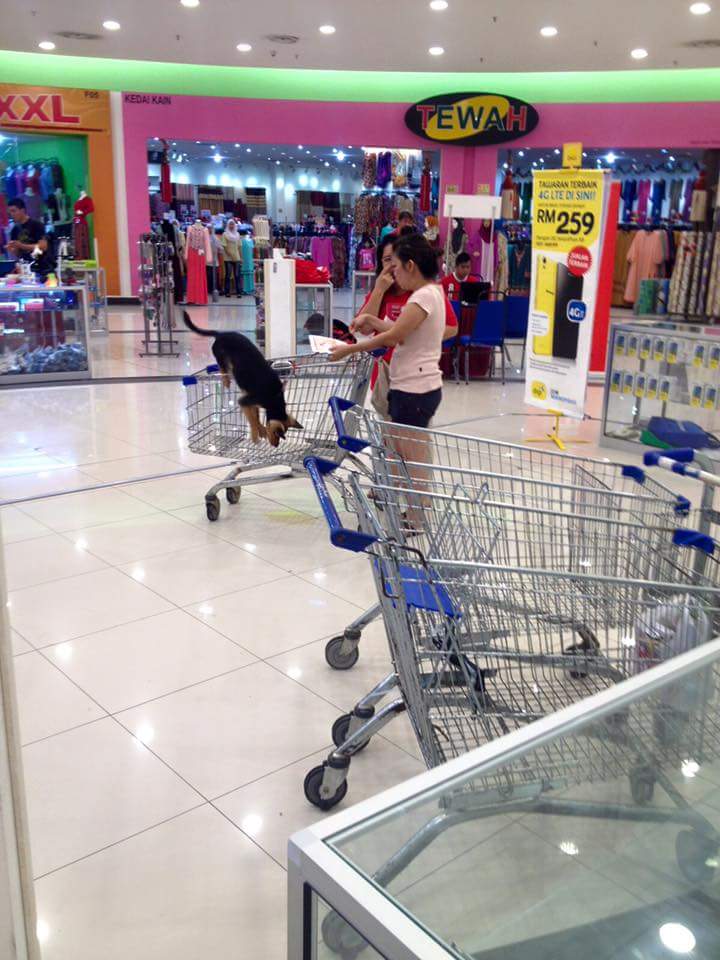 Tesco has apologised, what about that amoi who brought the dog? Is she going to apologise or is she a retard?

Tesco Malaysia has apologised for an incident at its Plentong branch, Johor Baru, in which a customer brought her dog into the store, in a trolley.

The Rakyat Post reported that the incident was photographed by onlookers and the image went viral on social media, sparking outrage from all corners of the community, angry at the disregard for public health and religious sensitivities.

According to a statement posted on its official Facebook page today, Tesco Malaysia said that it deeply regretted the incident and that it had very strict regulations on pets and animals on its premises.

“Tesco Malaysia does not allow pets within any of our premises,” the statement said.

According to the posting, Tesco staff and the Masjid Plentong committee scrubbed all its store trolleys so that they were hygienic, plus being safe to use for Muslim customers. – September 6, 2015.

Happened at a Tesco in Johor Bharu. The dog peed as well. Sometimes it’s owners like this who give bad name to dogs!

A Fortress Of Fur

This was captured in Tesco Plentong, Johor Bharu. A netizen on Facebook called Sharafazleen, uploaded this image with the caption:

Those who claimed this photo is fake and abused the person who posted it, please apologise because Tesco Malaysia has now CONFIRMED that the incident took place.

Ok now, let’s be practical. First of all don’t go hating on dogs. It’s never the dog’s fault, it’s the owner! As a person who loves dogs and all animals in general, even I feel this is something really foolish to do. Before we talk about this being insensitive to Muslims, we need to understand that regardless of religion, not everyone loves dogs. There are a lot of people who are afraid of dogs. People with cynophobia, dogphobics, children, you name them. Not everyone can accept the presence of dogs in public places like a hypermarket in this case. This is why even in western countries pets are not allowed in many places.

In fact, some people will have hygiene concerns to have a dog sitting inside a trolley. Simply because this is the same trolley customers will put their chicken, various other meat products, vegetables, baby products and more. Inconsiderate much?

I also would like to question where were the Tesco staff when all this happened?

Please SHARE the message & read more in the blog. The locals also washed (samak) over 500 trolleys after the incident. Check the photos and Tesco statement here: http://bit.ly/DogsInPublicPlaces

1 Response to Dog in the trolley: At times, dog owners are unthinking and inconsiderate.