According to Forbes, Syed Mohktar owns US$1.8 billion (RM7.74 billion) in assets, making him the 10th richest man in Malaysia this year.

*The Politics of Bread, Sugar and other UMNO Businesses in Malaysia: Crony Companies
*Bread: Gardenia and Massimo

In a statement, Umno Youth assistant secretary Mohamad Sahfri Abd Aziz said the move must be done to allay not only public concerns but also in response to local and international critics of Malaysia’s economy.

“Syed Mokhtar cannot remain like a ’silent devil’ who does not reveal the truth even though he has the knowledge and responsibility to explain the real situation on the decision to sell (Proton) shares to Geely…,” he said.

“Umno Youth is urging Syed Mokhtar to explain who is the real owner (of Proton) and the names of proxies behind the company,” he added.

Among others, he pointed out that former premier and Proton chairperson Dr Mahathir Mohamad has been one of the company’s most vocal critic.

“His (Mahathir) statements have triggered a polemic and confusion among observers and the public, as well as the business industry, on the future of Proton,” he said.

Syed Mokhtar also owned 55.92 percent of DRB-Hicom, the parent company of Proton, which sold 49.9 percent of its stake to Geely, much to the displeasure of Mahathir.

A search with the Companies Commission of Malaysia (CCM) showed that while Syed Mohktar did not directly control Etika, two of its shareowners have close links with the tycoon.

CCM documents revealed that Etika was set up on June 9 last year with a paid-up capital of RM2.

Its core business is the manufacturing of motor vehicle spare parts, engines and turbines.

The company, which is registered in Bangsar, Kuala Lumpur, is owned by Mohammad Zainal Shaari and Azman Hanafi Abdullah, both of whom serve as directors of the company as well.

An online check revealed that Mohammad Zainal has at least three directorships in Syed Mokhtar-linked firms, while Azman is a director in one of the tycoon’s companies.

KUALA LUMPUR (March 20): Felda Global Ventures Holdings Bhd (FGV) is understood to be in talks with two companies — one linked to businessman Tan Sri Syed Mokhtar Albukhary and the other China-based China National Cereals, Oils and Foodstuffs Corporation (Cofco) — to take a strategic stake in the ailing plantation company.

The Edge Malaysia business and investment weekly (Edge Weekly) for the week of March 20 — 26, 2017 reported two separate sources The Edge spoke to, had confirmed there have been talks with these two companies.

“I am sure a proposal by Syed Mokhtar is on the table,” the Edge Weekly quoted one source as saying.

Meanwhile, FGV CEO and president Datuk Zakaria Arshad was reported to have created quite a stir on the sidelines of the Palm and Lauric Oils Price Outlook Conference & Exhibition, when he brushed aside talk of Syed Mokhtar and the Tradewinds group being potential strategic long term shareholders in FGV.

“No, not with that group,” Zakaria responded when asked.

Zakaria said the new strategic shareholder would be one that would complement FGV.

He may have lost half his wealth by taking 5 of his companies private but he us still worth a cool RM5.2 billion. 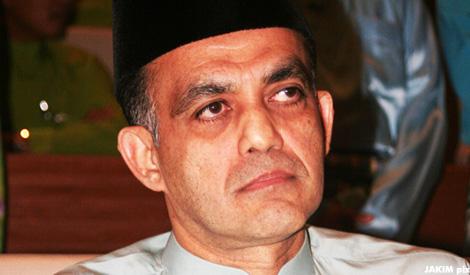 This despite his estimated wealth halved to RM5.2 billion, after taking five of his companies private in the past twelve months, KiniBiz reported.

In a statement, Anwar said that Syed Mokhtar now has 83.4 percent of shares in the company, leaving only RM174 million worth of shares to be divided among 170,000 farmers.

He said that Agriculture and Agro-based Industries Minister Ismail Sabri Yaakob’s explanation in the Parliament recently that the de-listing was temporary in order to restructure the company has raised more questions than answers.
…
“If it is true that Nafas and Nekmat’s holding will be raised to 5 percent each, how will they fund the purchase of these shares, which would be worth RM50 million, without adding to their own financial burden?” Anwar asked.

Syed Mokhtar Albukhary’s impressive list of assets includes power generation assets, ports, plantations, auto assembly and distribution assets, rice and sugar distribution and banks just to name a few. While it is difficult to gauge his wealth, in this first of a two-part series, KiniBiz shines a spotlight on the tycoon’s sprawling empire and looks at a breakdown of his assets.

At its close on Friday, MMC Corp, Syed Mokhtar Albukhary’s flagship, had a market capitalisation of about RM8.22 billion. This would indicate that Syed Mokhtar’s 51.76% equity in interest in MMC would have a market value of RM4.25 billion.

His other main holding company is DRB Hicom which closed at RM2.56 giving it a market capitalisation of RM4.95 billion. This would give his 55.92% a market value of RM2.77 billion.

Thus collectively the stakes in the two companies are worth in excess of RM7 billion.

Early this year Forbes ranked Syed Mokhtar as Malaysia’s seventh richest with a net worth of some US$3.3 billion or about RM10.5 billion.
…

How Syed Moktar became a millionaire by 30

KINIBIZ Syed Mokhtar Albukhary’s rise in corporate Malaysia has been a spectacular one considering his humble beginnings at Kampung Hutan Keriang in Alor Setar, Kedah, Malaysia’s northern most state. How he made it to such great riches is actually an interesting tale.

“His is a story of hard work and dedication … there were no sweet-heart deals for him (Syed Mokhtar),” an aide had once said. Most however, would differ from this view, suggesting Syed Mokhtar has been a beneficiary instead based on his close ties to the government and its leaders.

The transport business as a start

His first business was in transportation, where he started Syarikat Kenderaan Sentosa (SKS) in 1972 transporting rice. (Sentosa was the name of the hotel he stayed in when in Kuala Lumpur, he said in his autobiography released last year).

Read more: Go to KiniBiz for the full article

How Syed Moktar became a millionaire by 30 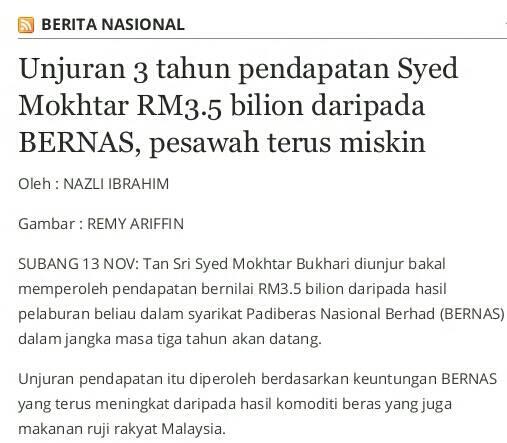 The sprawling empire of Syed Mokhtar

KINIBIZ At its close on Friday, MMC Corp, Syed Mokhtar Albukhary’s flagship, had a market capitalisation of about RM8.22 billion. This would indicate that Syed Mokhtar’s 51.76% equity in interest in MMC would have a market value of RM4.25 billion.

His other main holding company is DRB Hicom which closed at RM2.56 giving it a market capitalisation of RM4.95 billion. This would give his 55.92% a market value of RM2.77 billion.

Thus collectively the stakes in the two companies are worth in excess of RM7 billion.

Early this year Forbes ranked Syed Mokhtar as Malaysia’s seventh richest with a net worth of some US$3.3 billion or about RM10.5 billion.

Nevertheless getting to the bottom of his actual wealth is not a simple matter, as his assets are diversified and his shareholdings fragmented.

“There are so many assets linked to him, parcels of land in Johor, and now people are saying he’s part of Eco World Development (Sdn Bhd)…so many assets link back to him. Maybe only he knows his actual asset worth,” a source familiar with the tycoon said.

This is not including the stakes, sources say belong to him, but where he doesn’t surface such as in Bina Puri Holdings where Syed Mokhtar’s private company Jentera Jati Sdn Bhd has 15.91%, in the construction company, translating to a market value of some RM19.73 million.

Go to KiniBiz for the full article.

The sprawling empire of Syed Mokhtar

The PKR de facto leader also pointed out that if Syed Mokhtar’s attempt is successful, his monopolistic control over the strategic rice business could only benefit the tycoon while potentially destabilising future prices.

“Why has the government digressed from its original intent in the formation of Bernas which was to protect the interests of Bumiputera farmers, distributors and Bernas workers? Is the equity ownership of these people in Bernas not worthy of the government’s protection, yet ultra-wealthy, politically connected individuals get all the privileges?

“We condemn the recent spate of opportunistic acquisitions by Tan Sri Syed Mokhtar as his intent to take full control over Bernas at the time when its rice imports monopoly was to continue until Jan 2021, since these would result in mainly profiting one person, namely himself,” he said in a statement.

Last week, Bernas proposed a voluntary withdrawal from Bursa Malaysia after it failed to get 90 per cent acceptance support from shareholders.

In an exchange filing on November 6, the company said the joint offerers and parties acting in concert to take it private had only managed to obtain 83.69 per cent shareholders’ support as of November 4, 2013. This means that the company does not comply with Bursa’s listing requirements of having at least 25 per cent public shareholding spread.