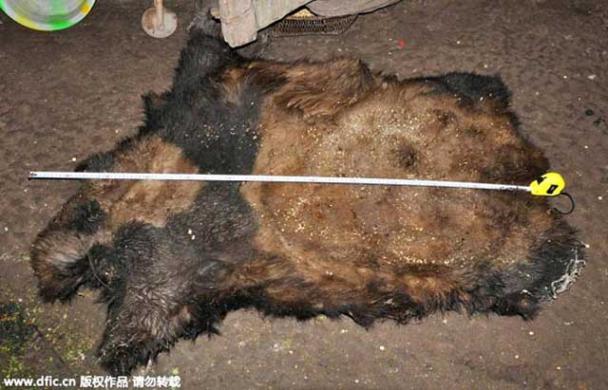 KUNMING – Ten people have been apprehended in Southwest China’s Yunnan province for killing a panda and trading in its meat, local authorities confirmed on Wednesday.

The suspects allegedly killed a giant panda in Zhaotong, Yunnan. Of the ten suspects, three have been formally arrested, a forestry official told Xinhua.

The panda’s fur, skull and leg bones were seized by police. Police also seized ten kilograms of meat. The dead animal was an adult female.

The Telegraph ‏@Telegraph 6m6 minutes ago 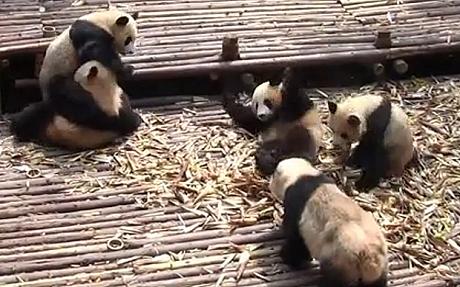 An official breeder was caught on camera beating a giant panda, Hua Ni, which is from the Ya’an Bifengxia Panda Kindergarten in the Sichuan Giant Panda Research Centre. Videos and photos circulating around have raised the ire of netizens. Offiicals have confirmed on Friday that this was the result of the “unlawful” actions of one of its breeders.

Sassiest panda ever, Sijia, of the Yunnan Wild Animal Park in Kunming, strutted around all cute-like after declining to participate in a medical-check up and breaking the scale. She was even caught sticking her tongue out at the veterinarians. SO SASSY! 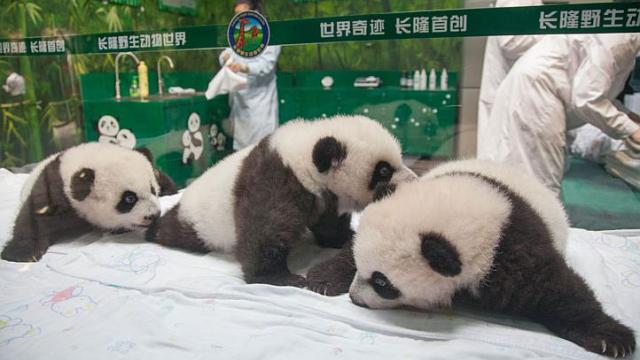 A handout photo taken and released on Nov 5, 2014, by Chimelong Safari Park shows a set of panda triplets, known as the world’s only surviving trio, meeting the public as they reach 100 days old in Chimelong Safari Park in Guangzhou, south China’s Guangdong province. A set of panda triplets, the world’s only known surviving trio, celebrated reaching their 100-day milestone in a Chinese zoo Wednesday as the public were allowed to visit them for the first time. — PHOTO: AFP/CHIMELONG SAFARI PARK

HONG KONG (AFP) – A set of panda triplets, the world’s only known surviving trio, celebrated reaching their 100-day milestone in a Chinese zoo Wednesday as the public were allowed to visit them for the first time.

Their births at the end of July were hailed as a “miracle”, given the animal’s famously low reproductive rate, and fears that they may not survive have been quelled.

The two male and one female cubs, which first opened their eyes in September, now weigh six kilograms (13 pounds) each, the zoo said.

Researchers finally discover what a panda looks like when it masturbates http://shst.me/915

After years of research and patient waiting, researchers have finally revolutionized their field by capturing images of a panda pleasuring itself. For some reason they want to share this revelation with the world, and so we pass it on to you, do with it what you will.

And now we can all experience this historic moment forever in hilarious GIF form:

A newborn giant panda on average weighs 150 g (0.33 pounds). About the size of a stick of butter.

Mother panda Ju Xiao hugs a cub, one of world’s only panda triplets to survive, in south China pic.twitter.com/INPuhxiAAg 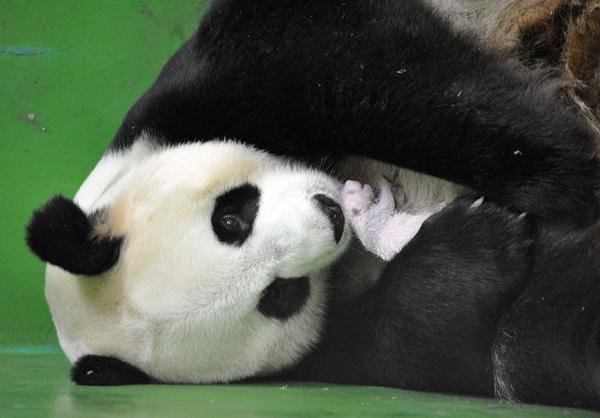 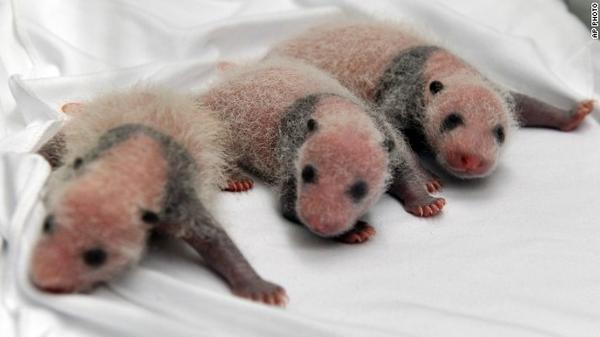 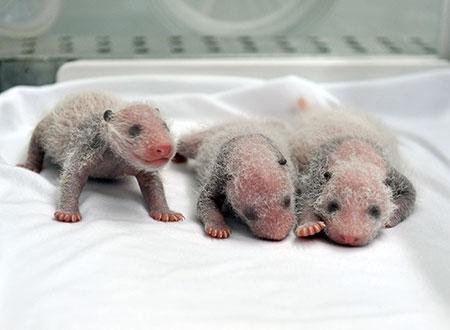 BEIJING – A giant panda has given birth to twins, the first pair of the endangered species born in the world this year, according to a wildlife center in southwest China.

The China Conservation and Research Center for the Giant Panda in Sichuan province said the panda named Haizi gave birth to the two cubs 10 minutes apart on yesterday (June 22).

Staffers at the center, which is part of the Wolong Nature Reserve, say one cub is a female and weighs 79.2 grams. Haizi has yet to release the other cub from her embrace.

Giant pandas have difficulty breeding, with females fertile for only two or three days a year.

Pandas number about 1,600 in the wild, where they are critically endangered due to poaching and development. More than 300 live in captivity, mostly in China’s breeding programs. AP

Giant panda spotted in the wild in NW China

Tokyo zoo posts video of mating pandas on its website

A mating pair of pandas have wasted no time in getting intimate, a Japanese zoo said Tuesday, coupling on their first evening together and then again the next morning.

The female Shin Shin and her companion Ri Ri were put in a private enclosure on Monday evening after keepers at Ueno Zoo in Tokyo noticed they were ready to mate.

“We have confirmed Shin Shin and Ri Ri mated on Monday evening and Tuesday morning,” Hidetoshi Kurotori, an official at the zoo’s education and information division, said. “Things are moving ahead smoothly.”