The Assassination of Datin Renyce Wong…

Seven, including a woman freed of murdering real estate agent

KUALA LUMPUR: Six men and a woman have been freed by the High Court today for the murder of real estate agent Datin Wong Siew Ling last year.

He also said that failure of the deceased’s husband to present himself as a witness had broken the chain of evidence.

“His (deceased’s husband) absence in the trial could mean two things… the first one being that he knows about the murder and afraid to come forward and secondly, maybe he is involved in the case.

“However, he might not be involved as looking at the deceased’s sister’s testimony, the deceased had told her sister to handover all of the documents to the husband should anything happen to her (the deceased),” the judge said.

The verdict was made this morning after a seven-month trial.

The courtroom was filled with joy when the verdict was delivered. Family and friends of the accused hugged them as soon as the court adjourned.
.

Seven acquitted of gunning down property agent in Taman OUG

Wong, a mother-of-five, was gunned down in Taman OUG, Old Klang Road while driving her children and maid to lunch at about 2.30pm on July 6, 2016 – the first day of Hari Raya Aidilfitri.

Her daughter, who was in the front passenger seat, was also hit when the gunmen fired five bullets at her Toyota Vellfire, one piercing the then eight-year-old’s intestines in nine places.
.

KUALA LUMPUR: Six people including a woman were charged at the magistrate’s court and at the Kuala Lumpur Hospital today over the murder of real estate agent Datin Wong Siew Ling, who was gunned down at Taman OUG, Jalan Klang Lama on July 6.
.
M. Pal Ganapathy, 26, and S.Vijendran, 29, were jointly charged with murder while K. Sri Kanapathy, 34; Chen Yuen Ming, 41; Chin Kok Leong ,43; and Liew Lai Chen, 46, were charged with abetting the two in the murder.
.
They nodded their head in understanding when the charge was read out to them before magistrate Siti Radziah Kamarudin.
.

Meanwhile, K. Sattiyarad, 29, who was down with dengue fever, was charged at the Kuala Lumpur Hospital with abetting Ganapathy and Vijendran. No pleas were recorded.

Who hired the assassins?

KUALA LUMPUR: The murder of Datin Wong Siu Ling, brutally gunned down by hired killers at Taman OUG on July 6, was masterminded by a businessman who owed her RM13 million.
.
Police investigations revealed that Wong wanted to venture into the ceramic business, and gave the money to the businessman and his wife last year.
.
City police chief Datuk Amar Singh said Wong, however, later asked for the couple to return her money when she found that the business venture was not taking place.
.
“From investigations, police found that the victim had hired a private investigator to locate the businessman and his wife in her bid to get her money returned.
.
“Following this, the businessman and his wife engaged the services of two contract killers. This was done via a restaurant owner and his wife, who acted as middlemen,” he told a press conference at the city police headquarters, today.
.
The couples and two suspected hired killers were among eight people whom a special task force nabbed in Perak and the city two days ago. Two other men arrested are associates of the hired killers. The suspects are aged between 26 and 54.
.
Police were told that the businessman paid the gunmen RM60,000 to carry out the hit.Read More : http://www.nst.com.my/news/2016/07/159722/taman-oug-murder-datin-ordered-killed-businessman-who-owed-her-rm13m

By Thasha Jayamanogaran and Jasmine Andria

KUALA LUMPUR, July 21 — The two assassins behind the drive-by shooting of Datin Wong Siu Ling (pic) in Taman OUG two weeks ago were paid RM100,000 to kill her.

“They were paid RM50,000 each to do the job. We are now investigating if the duo were behind three other shooting cases,” a source said.

He said forensics investigations showed the gun used to kill Wong was believed to be used in shooting cases in Perak, Selangor and Kuala Lumpur.
…

Police are investigating if the shooting was related to a Ponzi scheme in China after Wong’s husband, Datuk Wong Chun Kee, admitted to running such an operation there and had recently returned after making a profit.

Chun Kee had told Malay Mail he believed the attack was over an investment deal gone sour.

He said his wife had invested “millions” in a ceramic business eight months ago, but lost it all after the person she had dealt with “went missing”.

It was learnt he ran several businesses in Malaysia and China.

KUALA LUMPUR: Police have solved the June 6 shooting case in Taman OUG, here, which saw a real estate agent killed and her 8-year-old daughter seriously injured.
.
Inspector-General of Police Tan Sri Khalid Abu Bakar said police have arrested eight suspects in connection with the murder case, and seized a pistol yesterday (Tuesday).
.
“Congratulations Stafoc (Special Task Force on Organised Crime) and CID KL for solving the shooting case of woman and daughter in OUG, arrested 8 people in KL and Perak, seized a pistol yesterday. #GoPDRMGo,” Khalid tweeted through his handle @KBAB51 earlier this morning.
.
Deputy Inspector-General of Police Tan Sri Noor Rashid Ibrahim said the arrests were made separately in Kuala Lumpur and Perak.
.
“All the suspects were aged between 20 and 50. All of them are Malaysians. Police also seized a pistol in Perak, believed to be used in the shooting. “
.

We have thoroughly investigated the case and obtained enough information on each individual believed to be involved in this case,” he told a press conference at the Federal police headquarters in Bukit Aman here today.

The girl who was hit by a stray bullet when two assailants gunned down her mother in Taman OUG has regained consciousness.

Two policewomen visited the girl at about 1.30pm but they were not there to record her statement.

The police officers then left the hospital at around 2pm.
…

A stray bullet hit the girl, piercing her intestines in nine places.

The girl had underwent two surgeries at the Universiti Malaya Medical Centre.

The Star ‏@staronline 10h10 hours ago

KUALA LUMPUR: The husband of Datin Renyce Wong Siew Ling, the woman who was fatally shot in Taman OUG Wednesday, says that his eight-year-old daughter is still not in stable condition.

The man, a Datuk in his 30s, declined to elaborate further and asked for his family to be given privacy until Wong’s funeral was over.

UALA LUMPUR: The eight-year-old girl who was critically wounded by a stray bullet after her mother was shot dead in Taman OUG, off Jalan Kelang Lama here on Wednesday is in stable condition.

He said a post-mortem on the child’s mother, identified as Wong Siu Ling, a 32-year-old real estate agent was also conducted today.

Rusdi said police are yet to ascertain the motive behind the killing but have narrowed it down to a business she managed with her husband.

He said the woman’s husband runs a cosmetics business but police learnt that he was also involved in other ventures.

“We are looking at every aspect of the case to determine the motive but our investigations will be centred on the couple’s businesses,” he said.

It is learnt that her husband who is a Datuk in his 30’s had recently returned from a business trip in China.

Ponzi scheme led to murder of woman at Taman OUG?

The murder of a real estate agent at Taman OUG yesterday may be linked to the victim’s involvement in a Ponzi scheme in China, according to a report by Oriental Daily.

The report said both the victim and her 39-year old husband had allegedly been involved in the scheme. Kuala Lumpur CID chief Rusdi Mohd Isa reportedly confirmed this, and that police had not ruled it out as a possible motive for the murder.

However, Rusdi stressed that the actual motive of the shooting was still being investigated.

“The deceased’s husband has admitted to running an illegal Ponzi scheme while in China, and had recently returned to Malaysia after turning a profit,” the CID chief was quoted as saying.

…
KUALA LUMPUR: Police are closely examining the nature of the business operated by a female real estate agent, who was fatally gunned down in Taman OUG yesterday.

The family’s business, said police, could possibly provide a clue to uncovering the motive of the drive-by shooting, which also left the woman’s daughter critically injured.

“Our initial investigation showed that the husband of the victim runs a cosmetics business.

“We are now checking if there are other businesses connected with the case,” he said.

Meanwhile, Rusdi said the woman’s eight-year-old daughter, who was also shot, is now in stable condition.

“She will be undergoing a second surgery to remove a slug from her heart,” he said.

KUALA LUMPUR: A real estate agent was shot dead at close range by two unknown assailants on a motorcycle while driving her luxury MPV in Taman OUG here.

Her eight-year-old daughter, who was sitting in the front passenger seat, was also shot and is in critical condition.
…

“She was driving with five children and a maid when two men on a motorcycle approached the vehicle and opened fire,” he told reporters when met at the scene.

He said the suspects are believed to have fired five shots at the vehicle with one hitting the 32-year-old woman in the neck.

“Her daughter who was sitting next to her was also shot and has been rushed to the Universiti Malaya Medical Centre for treatment,” he said.

Huberto Lloris and 1 other Retweeted

KUALA LUMPUR: A woman was shot dead by an unknown assailant near a petrol station in Jalan Hujan Emas, Taman OUG here today.
.
Bukit Jalil Fire and Rescue department spokesperson said they first received a distress call from public about 2pm, claiming that that an accident had taken place at the location.
.

“However, further checks on the vehicle, showed that there was no sign of accident having taken place but a woman, was found shot dead in her own vehicle seat. 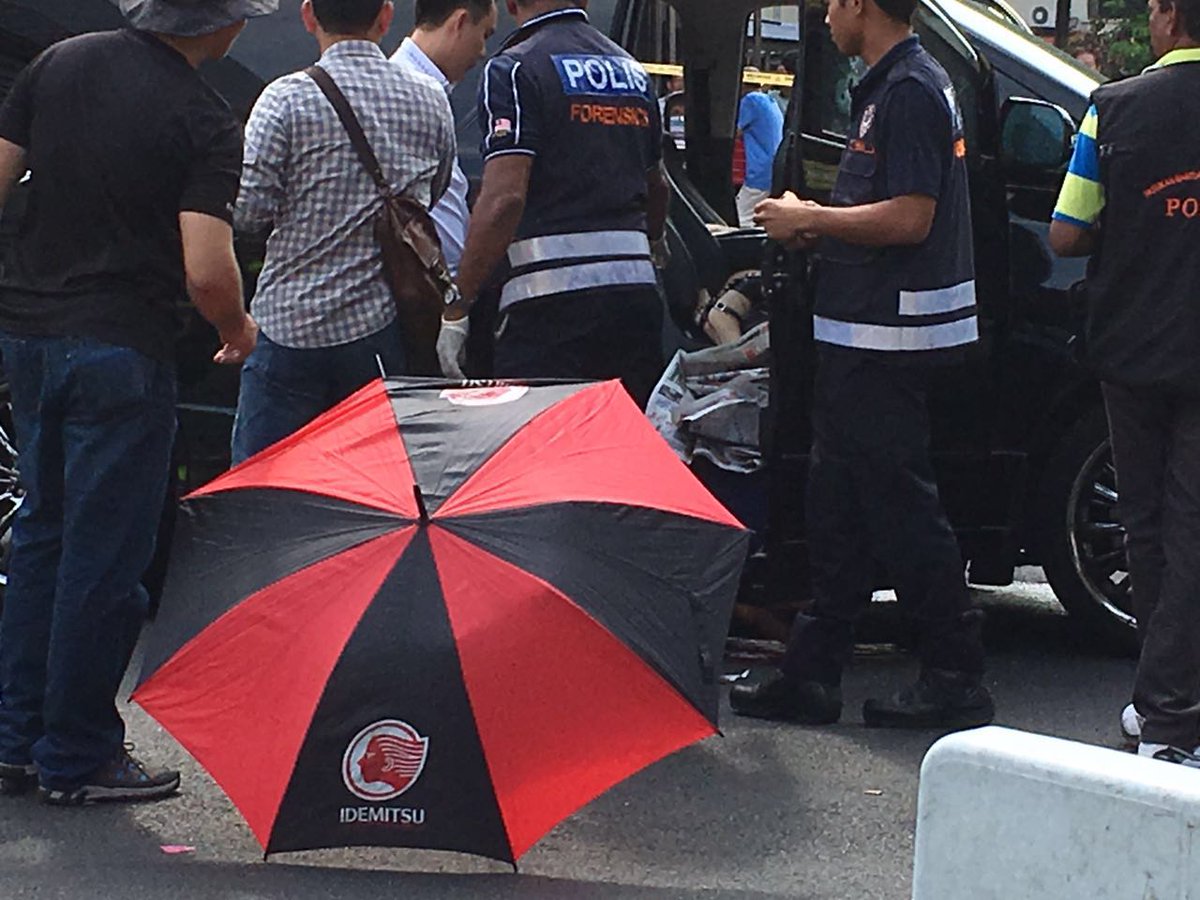 Like Loading...
This entry was posted in Uncategorized and tagged crime in KL, crime in malaysia, malaysia, woman shot dead in taman oug. Bookmark the permalink.

4 Responses to The Assassination of Datin Renyce Wong…