Malaysia’s lower House of Representatives or Dewan Rakyat will convene on Monday for its first session since the May 5 general election, the most controversial and divisive ballot ever seen in the country with the Opposition refusing to concede defeat and demanding re-elections in 30 seats.

A one-hour Q&A (question-and-answer) session of the Dewan Rakyat sitting may also be carried live on national television, but final confirmation for the telecast is still pending from Communications and Multimedia Minister Shabery Cheek.

Malaysia’s Parliament got off to the fiery start expected by most in the country after one of the most divisive and controversial general elections ever held.

At Parliament’s door step to greet Prime Minister Najib Razak were dozens of youth activists demanding the resignation of the Election Commission chiefs and even after the sitting in the August house had begun, the demonstrators were unwilling to disperse.
……

Meanwhile, the first session of the Lower House (Dewan Rakyat) began at 10am.

Prime Minister Najib Razak led the swearing-in of the Dewan’s 222 elected representatives. The oath-taking had followed another explosive session. As expected Najib’s Umno-BN coalition steamrolled their way through the election of the Speaker and Deputy Speaker.

The Opposition’s demand for a secret ballot was effectively brushed aside, with all the Members of Parliament compelled to sign their names on the ballot slips. This paved he way for Umno reps Pandikar Amin Mulia and Ronald Kiandee to be elected Speaker and Deputy Speaker respectively.

“Standing orders breached- MPs made to put down names in ballot for speaker- Najib does not trust his own men,” tweeted N Surendran, the first-time MP for Padang Serai.

“Only in Malaysia. Secret Balloting with Member’s of Parliament name on the ballot. Last I check secret means Rahsia. Parliament convenes!” tweeted Anas Alam Faizili, whose comment typified the uproar sparked on ‘Twitterjaya’ as commentators swamped the social media network to follow the proceedings.

Click on the link for the rest of the report!
Seorang tahanan demo parlimen cedera teruk

Following the mass arrests, the remaining protesters agreed to disperse after Shah Alam MP Khalid Samad accepted their memo and promised to hand it to Najib and Zahid on their behalf.

“We congratulate the protesters, who despite their youth, managed to defend their stand by completing the camp-out and delivering their memo to the country’s leaders. Your task is done and you should go home and rest or visit those who have been arrested and see if they need any help,” said Khalid.

“We also regret that PM Najib and his government did not see fit to recognize this youthful initiative to make a stand to improve the democracy of this country. Instead of lauding and encouraging the youth of this country, it is sad that the government of the day only hounds them.”

KUALA LUMPUR – “Three truckloads” of activists, mostly from youth NGOs, were arrested by Malaysian police outside Parliament House where they had gathered to demand electoral reforms and the immediate resignations of the Election Commission’s top management.

According to eyewitnesses and members of the NGOs participating in the demonstrations, at least 33 people were nabbed and believed to have been sent to the Dang Wangi headquarters where they are expected to face charges.

The government-controlled Bernama news agency reported at least 12 arrests, blaming the “ruckus” on Opposition Leader Anwar Ibrahim’s Pakatan Rakyat coalition, which had organized a mammoth Black 505 rally on Saturday to protest the vote-rigging and cheating they claimed had robbed them of victory during the May 5 election.

The police have not made any comment yet but given the number of arrests, it is likely that an official statement will be released later today.

Among those arrested were student leaders Safwan Anang and Adam Adli. Other activists who surrendered themselves include Chegubard or Badrul Hisham Shaharin, who is also an Opposition politician, Auntie Bersih (a well-known face in the activists circle) and Roslan Ismail, the head of Ambang 13 – a Kelantan-based pro-democracy youth outfit.

“We didn’t start it. The police were the ones who were ‘kasar’ (rough). They started the fight and manhandled our activists. Our media has captured on camera and we will show these to the public once we are able to get the clips uploaded,” Fazli, one of the protesters aged 22, told Malaysia Chronicle.
…..

Police manning the blockade at Parliament outnumbered the protesters by at least 3 to 1.

At the scene, Malaysia Chronicle’s writer did encounter a strongly-built man with his face covered with a scarf. We believe he was an agent provocateur from the police although we could not question him or get confirmation from the police. The man, with unusually good physique, had tried to deflect our writer by pushing her shoulder when she tried to take a shot of the students who had been bundled into a Black Maria.

However, there were also many other police officers there who were courteous and helpful, urging and persuading instead of barking orders and using force to push away the media.

Sad to say, the police treatment of the protesters was far less conciliatory. If the labeling by the government-controlled media is any gauge – that the protesters were merely disgruntled members of the Opposition – then presumably the police’s lack of respect towards the group may also stem from the same belief.

“That is an abuse of power and the day the authorities understand this, and accept that it is the people’s right to support whichever political party they wish and have the freedom to express their views peacefully without undue disturbance from the authorities, then our job will be more or less done,” a lawyer who had come to help the activists upon hearing news of the demo told Malaysia Chronicle.

Activists take to Jln Parlimen, 26 detained
A group of some 50 activists, earlier kicked out of their camping ground at Padang Merbok, have moved their protest to Jalan Parlimen.

The group, among which include student activist Adam Adli Abdul Halim, have been lying on the main road leading towards the parliament building since 10am.The situation became tense when the group then tried to breach the police barricade, placed 800 metres from parliament gates.However, the protestors did not succeed in getting by as the barricade was manned by no less than 300 personnel.

Twenty-six were detained in the 11.10 incident, including student activist Mohd Safwan Anang.

This include eight others who had surrendered themselves.

By RAHIMY RAHIM and TASHNY SUKUMARAN

A group of protesters have gathered in front of Parliament, ahead of the swearing-in of MPs.

KUALA LUMPUR: Activists protesting in front of Parliament Monday morning have tried to breach the barrier formed by police personnel, resulting in scuffles. Some of the protesters have been arrested.

They have been told to disperse immediately and Federal Reserve Unit (FRU) personnel were seen preparing to use tear gas.

Police personnel have refrained from any violence, apart from pushing those trying to break the barrier to the ground.

Police maintaining a close watch at Parliament as protesters gather.

Earlier, a small group gathered in front of Parliament, ahead of the swearing-in ceremony of MPs on Monday.

Police personnel stationed at the entrance to the House to monitor the situation asked the group to disperse.

However, the organisers told protesters to sit on the sidewalk, as they had a memo to hand to the Prime Minister, on the issue of the Election Commission being under Parliament.

Those in the group carried banners, calling for the Election Commission (EC) panels to resign and over issues concerning deaths in police custody.

Lawmakers from both sides were seen entering the House.

Activists who had camped out since Saturday at Padang Merbuk nearby, joined the group in front of Parliament at around 8.30am.

Activists try to crash police barrier at Parliament, some arrested 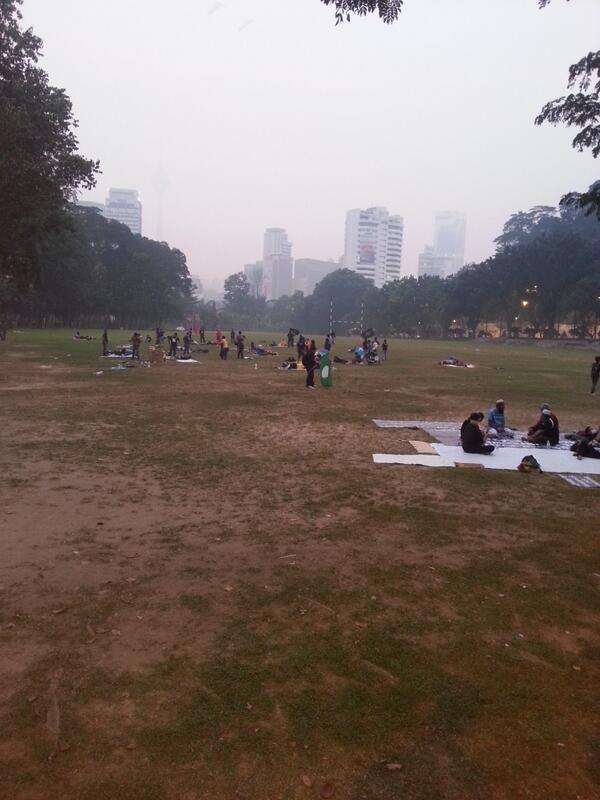 Datuk Seri Shahidan Kassim does not believe any Barisan Nasional MP will propose or support a no-confidence motion against Prime Minister Datuk Seri Najib Razak, a course of action some believe possible given the level of restlessness among a group of East Malaysian MPs.

He should know. Since being sworn in as a Minister in the Prime Minister’s Department, the Umno veteran has been playing the role of a trouble-shooter, reaching out to disgruntled Barisan MPs.
…..

“Impossible for BN to move a no-confidence motion against the PM. Who is going to do it? Surely not BN,” he told The Malaysian Insider. “If the Opposition is going to propose it, don’t tell me BN MPs will support it?” he added.

Anwar to return to Parliament on Monday as Opposition Leader

Anwar Ibrahim is set to return to Parliament on Monday as Opposition Leader, after members of his tripartite Pakatan Rakyat coalition confirmed they have thrown their support behind the charismatic 64-year-old former deputy prime minister.

Anwar, now the de-facto leader of the PKR or the People’s Justice Party, had indicated his reluctance to remain the Opposition chief after coalition partner DAP won 8 seats more than the PKR’s 30 in the May 5 general election. PAS, the other partner, won 21.

Together, the Pakatan parties control 89 seats compared to the 133 controversially won by Prime Minister Najib Razak’s Umno-BN coalition but in terms of the popular vote, the Pakatan holds 51% and this gives them a powerful if unofficial say over the country’s governance.

“It has been confirmed Anwar will be the Opposition Leader again,” a top-level Pakatan source told Malaysia Chronicle.

“He is the obvious choice and put it this way, he has more than earned his stripes. At this point in time, no one else in the Opposition can mobilize public support or is able to pull the different ethnic groups together better than he can.”

Anwar to return to Parliament on Monday as Opposition Leader

KUALA LUMPUR (June 21):  The seating arrangement for the top opposition MPs in the Dewan Rakyat for the 13th Parliament has been changed following request made by Pakatan Rakyat.
…

DAP advisor Lim Kit Siang said the decision to ask for a reshuffle of the seating arrangement in the upcoming assembly, which starts on Monday, was to show greater cohesiveness.
…
“We stood in the election as a group, so we will remain a group in Parliament,” the Gelang Patah MP told fz.com when contacted this evening.
…
It was revealed during a press tour in the Parliament today that for this assembly, opposition leader Datuk Seri Anwar Ibrahim (PKR-Permatang Pauh) will be sitting next to Datuk Seri Abdul Hadi Awang (PAS-Marang).
…
On Abdul Hadi’s left is Kit Siang and his son Lim Guan Eng (DAP-Bagan).
…
Previously, the seating arrangement was according to the three parties, namely PKR, PAS and DAP, whereby MPs from the same party sit in a block.
…
The Speaker however can still make changes according to his discretion.
Read more: http://fz.com/content/top-pakatan-rakyat-leaders-sit-together-dewan-rakyat#ixzz2X8cGrk3a