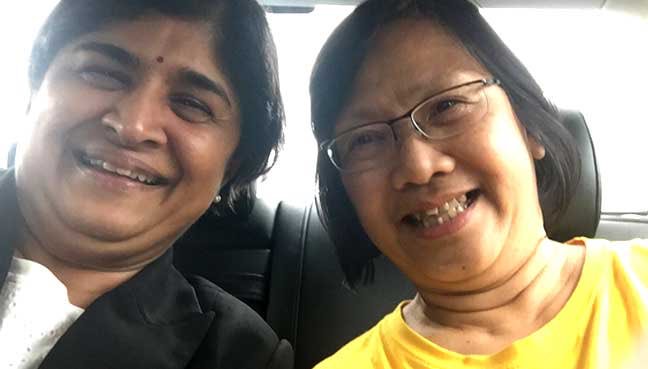 Bersih chairperson Maria Chin Abdullah will be lodging another police report today over threats to her children, after her son’s car was splashed with red paint.

“At 2.57am today, some rascals poured red paint over my son’s car. I will be making a police report today.

“So nasty and cruel to do this to my son,” she said in a WhatsApp message.

Jamal: Death threats against Bersih ‘fabricated’, not from us

Red-shirt leader Jamal Md Yunos has dismissed death threats made against leaders of pro-electoral reforms group Bersih, and their family members, as pure fabrication, distancing his group from what he said were mere theatrics.

“This is mere fabrication by them. Their struggle is based purely on lies and slander. So it is not impossible that this was made up by them to court sympathy from their supporters,” Jamal told Malaysiakini.
…

Jamal again accused Bersih of fabricating the death threats as a false flag operation to drum up support and sympathy, as their roadshow which has been going on for several weeks, failed to draw public support except for small groups of supporters and their own members.

Asked what if the death threats were real, Jamal said that whatever the case, Bersih should have been long dead and gone, though he did not indicate if he meant this figuratively or literally.

“They should have died long ago and today, such a group shouldn’t exist in Malaysia

“A group like this, with their beliefs, with their methods, shouldn’t exist and people like these should not exist in our multiracial country, which has been peaceful since Merdeka until now.

“Suddenly the group comes forward today, supposedly threatened by IS and what not. I have already said that this group has been infiltrated by IS and Daesh. I have sent evidence and proof to the cops, let them investigate further.

They have photos of my sons’ MyKad, says @mariachin on death threat

Bersih chairperson Maria Chin has revealed that those who issued a death threat against her, also sent images of her three sons’ MyKad.

“I don’t know how they got hold of the photos. This just shows how desperate they are.

“They are using the name of Islam to spread slander and scare us,” she told reporters after filing a report with the Petaling Jaya district police headquarters this evening.

Maria had received the threat via her mobile phone, and the message had stated that it was a warning from Malaysian Islamic State operatives.

(In the name of Allah, and the sanctity of the Islamic struggle in Malaysia, if you want to lose your head like in Syria, continue with your stupid work. I will decapitate you, record it and spread it on You Tube. I know who you are, I know where you live and I know your family and children).

Maria Chin to lodge report over death threat, says image is ‘too much’

Bersih chairperson Maria Chin Abdullah has confirmed receiving a death threat from an anonymous individual, in the run-up to the Nov 19 Bersih 5 rally.

The death threat was in the form of an image of a man shrouded in all black and holding a dagger, with one hand on the scruff of ‘her neck’ – her image wearing a Bersih 5 t-shirt superimposed on the original photo.

“We need some excitement in our lives right?” said Chin when contacted this morning.

“I got a lot of these kinds of threats from unidentified numbers.

“Normally I would ignore them but this time it is a bit too much… Think of my three sons,” she said, adding that a police report will be lodged later this evening.

We condemn in the strongest terms the death threats via WhatsApp messages against @Ambiga_S @mariachin @mandeepkarpall & their families.

Like Loading...
This entry was posted in Uncategorized and tagged bersh 5 and death threats, death threats to ambisga maria mandeep. Bookmark the permalink.