Welcome to #Brinchiang, the Cameron Highlands, where they puncture your tyres: This is the 2nd reported incident.

Posted on October 3, 2016 by weehingthong

One-Way Route System In Cameron Highlands Extended To May
.

IPOH – The one-way traffic system implemented in two main focal points in the town of Brinchang, Cameron Highlands have been extended until May 17.

Cameron Highlands District Police chief DSP Hasadid A. Hamid said it was aimed at obtaining a detailed study on the effectiveness of the system, and public reactions to it.

He added that the implementation of one-way traffic was on the instruction of the Acting Sultan of Pahang Tengku Abdullah Sultan Ahmad Shah who had asked the relevant departments including the police and the Public Works Department to find solutions to the problems of traffic congestions.

“He has visited the area on February 15 before ordering a review of the traffic in all major towns in the Cameron Highlands, namely, Ringlet, Tanah Rata and Brinchang for the comfort of all,” he said in a statement here today.

Previously, one-way routes from the Km64 stretch in front of the Hotel Iris heading to Brinchang town, and Km65, in front of the Cameron Highlands district police headquarters heading to Tanah Rata, were carried out on a trial basis for one month from March 17 to April 16.
— BERNAMA

CAMERON HIGHLANDS: About 70 shops at Brinchang here are closed for the day in protest of the one-way street system for Jalan Tapah-Cameron Highlands in the town centre.

Regional Environmental Awareness Cameron Highlands president R. Ramakrishnan said the protest was held as many shop owners and town folk in Brinchang were unhappy with the system.

He said residents felt the system did not help to solve the traffic congestion issue and caused more problems and inconvenience.

Ramakrishnan said more vehicles were speeding along the road now.

“There’s a primary school there and schoolchildren are in danger of being mowed down by speeding vehicles. There have been several accidents already,” he said.

He added that the congestion along the road had worsened instead.

During a visit to the highlands in February, the Regent of Pahang, Tengku Mahkota Tengku Abdullah Sultan Ahmad Shah took note of the congestion issue in Brinchang and tasked the police, district council, land office and the Public Works Department to come up with a solution.

All parties involved came up with the current one-way street system and implemented it on a trial basis for a month starting on March 17. The trial period has since been extended until May 17.

TOURISTS GO TO BRINCHIANG AND SPEND THEIR TOURIST RINGGIT THERE, AND SOME HAVE THEIR TYRES PUNCTURED.

Brinchiang is small and cannot cope with the huge number of cars that are driven there by tourists.You, the tourists, are forced to “park haphazardly” because there are insufficient parking bays.

Unless and until the authorities come up with a quick solution, this will happen again. And again. As always, you will be accused of haphazard parking when the fault lies with the Brinchiang authorities.

They want your tourist ringgit but won’t do anything about the parking problem. 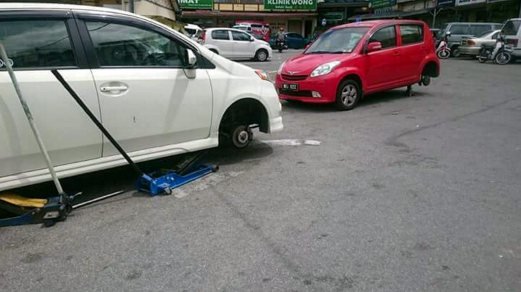 IPOH: Twelve vehicles parked around Brinchang town in Cameron Highlands had their tyres deliberately punctured in the middle of the night in what appears to be an act of mischief.
.
Cameron Highlands police chief Deputy Superintendent Hasadid A Hamid said the incident occurred between 3am and 5am on Saturday when the vehicle owners were fast asleep.
.
“We received two reports by the owners and we are in the midst of investigating,” Hasadid said. He added that initial investigations reveal that the vehicles were parked haphazardly and were obstructing traffic, which may have made other motorists angry.
.

“We advise visitors and tourists to Cameron Highland to park their vehicles accordingly to avoid this situation from recurring,” said Hasadid.

Some vehicles in Brinchang had only one tyre punctured while others had two or all four damaged with a sharp object.
… 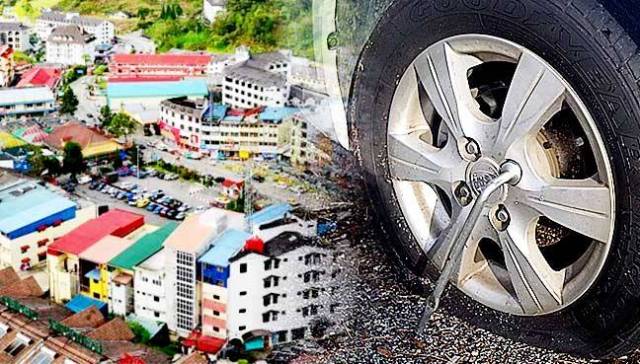 .
KUANTAN: The tyres of 20 vehicles parked around Brinchang town in Cameron Highlands were deliberately punctured.

This was believed to be an act of mischief committed by several individuals early this morning.

Cameron Highlands police chief DSP Muhammed Rizal Kamarudin said the incident occurred between 3am and 5am when the vehicle owners were fast asleep.

“It involved 20 vehicles which were obstructing traffic as they were parked haphazardly.

“Some vehicles had four or two tyres punctured while others had only one tyre punctured,” he said when contacted here today. 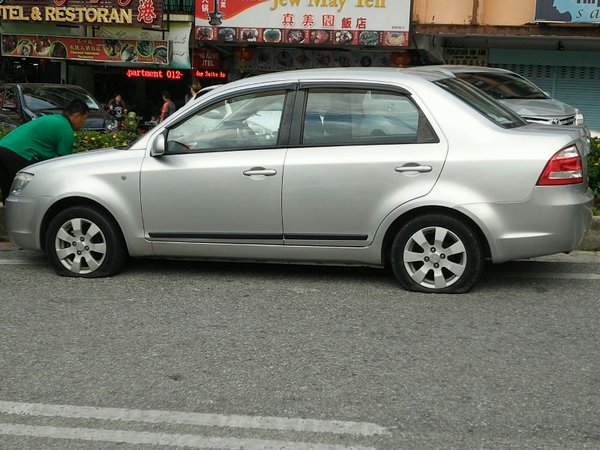 CAMERON HIGHLANDS: About 20 parked vehicles parked near Brinchang here, were vandalised by a group of individuals.

In the incident which occurred between 3 am and 5 am this morning, all the vehicle tires were punctured with a sharp object.

District police chief Deputy Superintendent Muhammed Rizal Kamarudin said initial investigations conducted with witnesses at the scene revealed that the vehicles tires were punctured by a group of men.

He said the vehicles were believed to be obstructing a road there. “The motive of the incident is still under investigation and police have received 11 reports from owners until 3pm.