A certain UMNO minister panders to mat rempit. In Thailand, they deal with them as they deserve… 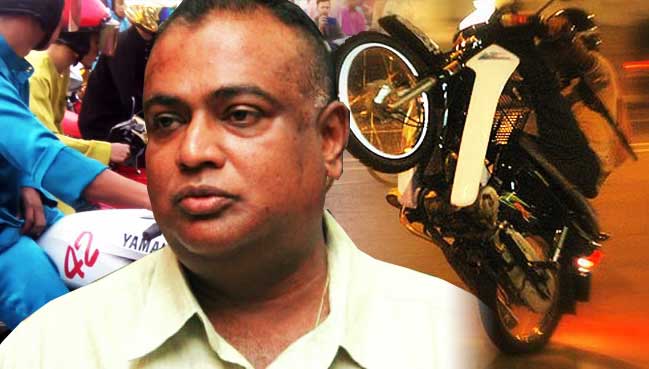 Gov’t to proceed with road closures for Mat Rempit races https://shar.es/1je1Ro  via @sharethis

PETALING JAYA: The government will proceed with closing roads to allow “Mat Rempits” to display their motorcycle “skills.”

The Sun daily quoted Federal Territories Deputy Minister Loga Bala Mohan saying that the ministry was looking at all possibilities to ensure the event could be conducted “properly and successfully.”

The ministry is currently in the midst of gathering input and feedback from the public on the event, to prevent any mishaps or damage to infrastructure.

“The road closures will be in the Federal Territories–Kuala Lumpur, Putrajaya and Labuan – but the time and location will be determined based on the findings by the (respective) councils (under the ministry),” he was quoted as saying.

Maybe their sons or cucu are mat rempit kot?

Watch a video of the mat rempit that Tengku Adnan loves.

Wait several seconds for the video to appear. 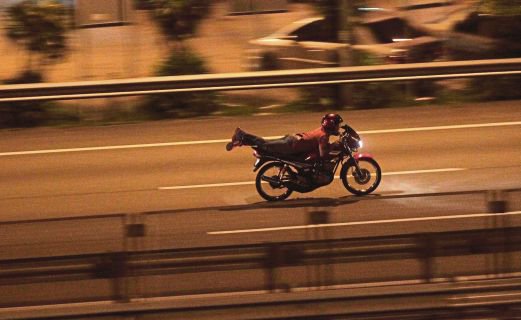 So what motivates people to ride through heavy traffic, endangering life and limb, risking reprisals from law enforcement? It is not the race per se, it has to be said.

It is the adrenalin which courses through their bodies. It is the sense of accomplishment, misplaced though it may be, that they have cheated death and the police.

They are in it for the women who sometimes are there for the taking.

The recent suggestion by Federal Territories Minister Datuk Seri Tengku Adnan Tengku Mansor that certain roads in Kuala Lumpur be closed at times to organise legal street races raised many an eyebrow and the blood pressure of quite a number of people.

To be fair, the honourable minister had surely meant well. It was an attempt not just to steer these young riders onto the right path, but also to stop illegal racing, which endangers the lives of riders, other motorists and even pedestrians.

But Tengku Adnan must also understand the concerns of others. City folk have had to put up with Mat Rempit for decades now, so they can’t be blamed for not wanting what has become something of a subculture to be legitimised.

They are also concerned that closing off certain roads will cause unnecessary congestion at a time when there should be none.

Should Tengku Adnan’s idea actually turn out to be a success, people are afraid that there will be more and more gangs of young motorcyclists roaming the streets, encouraged by their now-legitimised activities.
..
Read More : http://www.nst.com.my/news/2016/03/131276/steering-mat-rempit-right
—

Stupid of umno is to see these losers mat rempit legalization!

Malaysia has MAT REMPIT and SUPERBIKERS!

Nits become lice (kutu) and mat rempit grow up to be voters.

Is UMNO so desperate for votes? 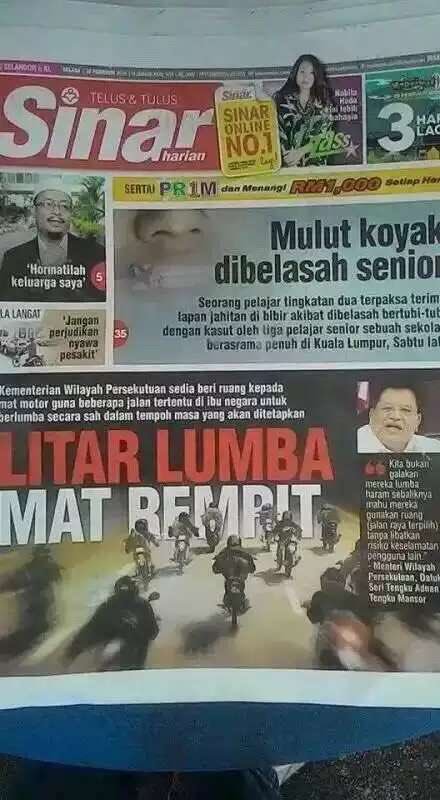 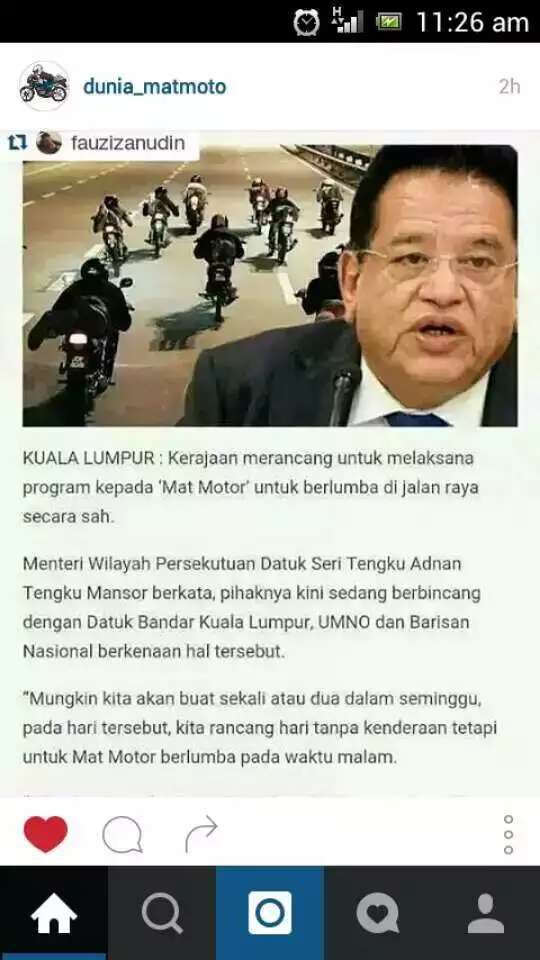 “Why Do #MatRempit Get Priority While Our Bright Students Are Ignored?”- Selangor Speaker http://ow.ly/YDCK1 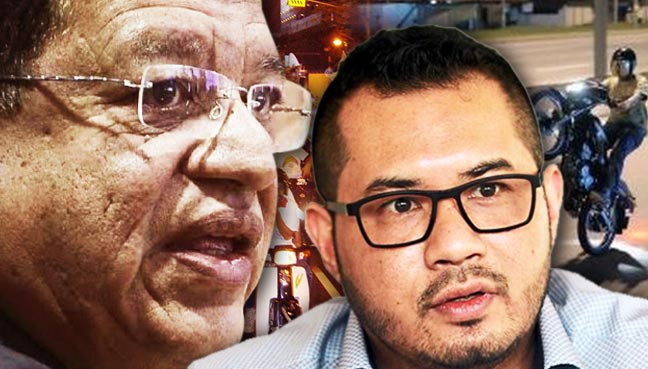 Has govt given up on rehabilitating Mat Rempits?

Do we need to legalise a social menace just because we have not been able to rein in these illegal street racers who pose a danger to other road users?

Even before the dust over the sudden flip flop of the plan to bring in 1.5 million Bangladeshis has settled, more has just been kicked up by Tengku Adnan Tengku Mansor’s shocking announcement that the government is considering allowing the notorious Mat Rempit use of some roads in the Klang Valley for their races.

…we would like to ask Ku Nan if we are learning from the US to legalise a social menace, in this instance the Mat Rempit races, because we have not been able to rein it in. So we too have to legalise those mad races just because we can no longer handle these racers?

Lest anyone should rejoice that once Ku Nan’s idea is put in place, the Mat Rempit menace to other road users will come to an end, let’s not lose sight of the other moral issues that will always haunt us.

The Mat Rempit youths are mostly young Malays from dysfunctional family backgrounds. I believe they have suffered from a lack of parental care. They take to races for excitement and many are said to have addiction to drugs and promiscuity. Some are also said to be snatch thieves.

Given their backgrounds I think the government is committing a grave sin by allowing these hyper-active youths to flirt with the high risk of death or permanent disablement on those tracks provided by the government.
…

How many more young people will be tempted to swap a proper education or a decent job for the thrills provided on those approved race tracks, to the detriment of their future?

Just wait for the accidents to happen and the grieving relatives will quickly finger the ones responsible for legalising the races! And perhaps the ones who may claim credit for turning a bizarre idea into a reality will have to search their souls every time a fatality occurs. 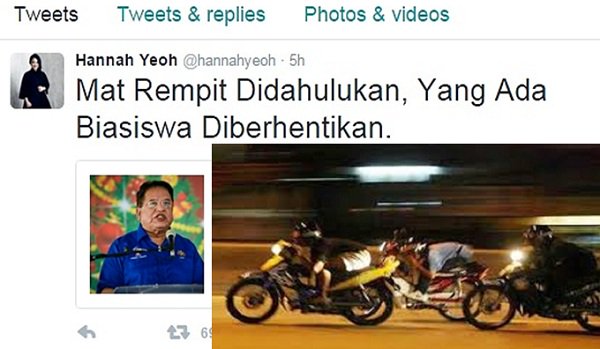 However, DAP Wanita assistant public secretary Syerleena Abdul Rashid slammed the proposal, saying allowing untrained drivers to race not only discounts safety risks, but fails to address the root cause of the problem.

“They deserve the opportunity to acquire skills and knowledge needed to survive in a rapidly-developing nation.

“Sanctioning illegal street racing will provide none of the above and is simply a bad idea. Therefore, the government must exercise absolute diligence before supporting such a controversial move,” Syerleena (photo) said in a statement.

She said researchers found those who partake in “harmful activities”, such as illegal street racing, come from troubled or lower-income homes, and are pushed to the activity through boredom, peer pressure or poor parental supervision.

“The idea behind the street racing culture is to form teams and to race against one another – often regarded as a form of organised crime or gang activity.

“This is absolutely the wrong kind of message any government should be sending. If anything, this is a weak approach that will only ineffectively address one of the many social ills plaguing our country,” she said.

Syerleena said it was “pathetic” that after so many years, the government has yet to conduct sufficient research to find sustainable means to address the Mat Rempit issue. 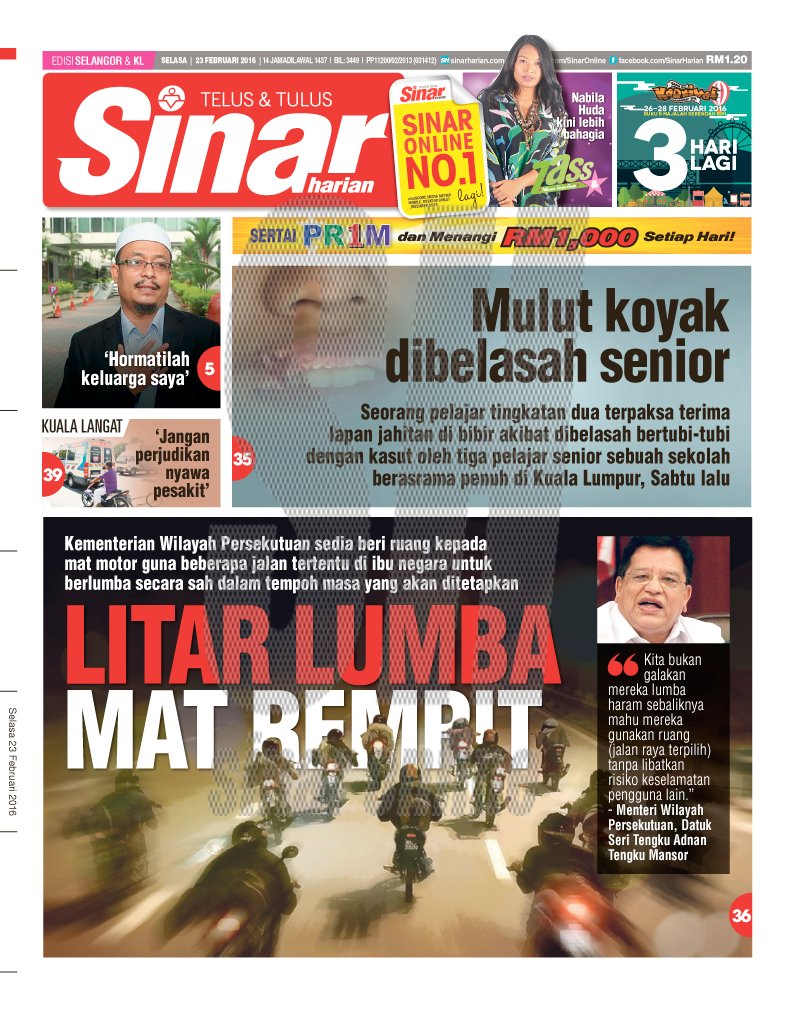 Kuala Lumpur is planning to set up a night track around the city centre for mat rempit to race.

Federal Territories Minister Datuk Seri Tengku Adnan Tengku Mansor said the night track would be modelled after the bi-weekly Car-Free morning, where several roads in Kuala Lumpur would be closed to traffic for few hours to enable cyclists to ride on it.

Tengku Adnan said safety barriers would be placed along the identified routes at predetermined time to enable the “mat motors” to race.

“It is not meant to encourage them to race, but to control the situation because we are aware that this is their only form of entertainment due to the high cost of living,” he said this at the opening of the Taman Metropolitan Batu bridge.

He said this would also prevent them from participating in illegal street racing.

He said they are also looking at turning the entire event into a carnival, where food trucks would be invited to peddle their food. 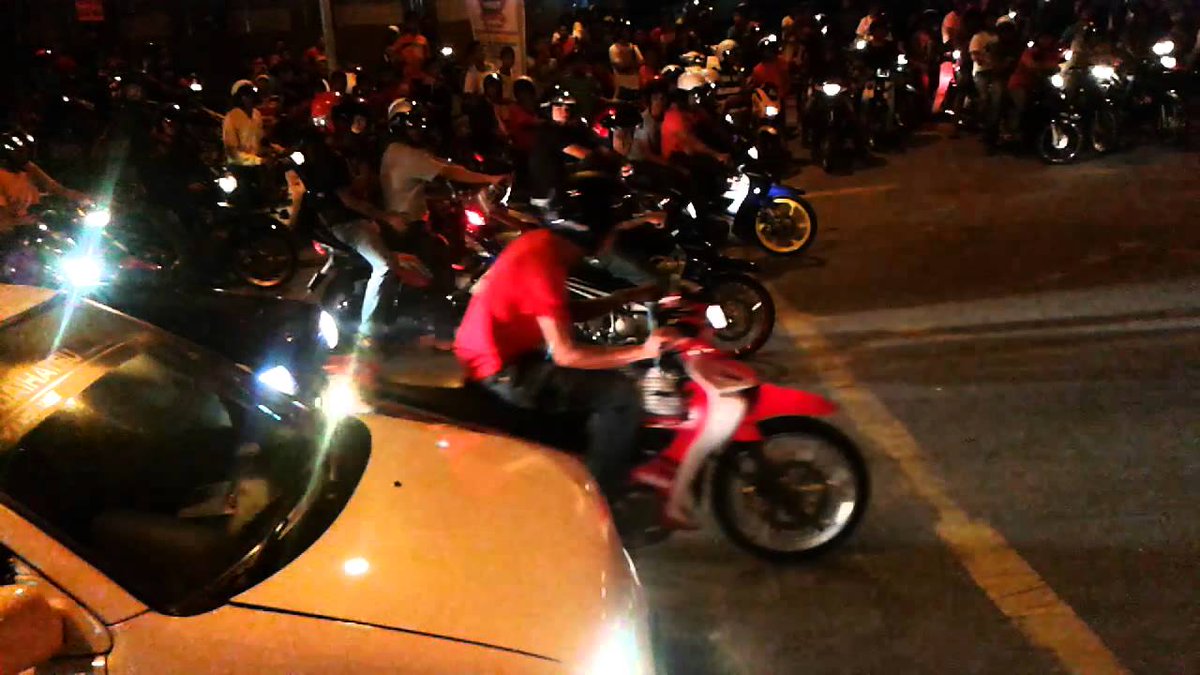 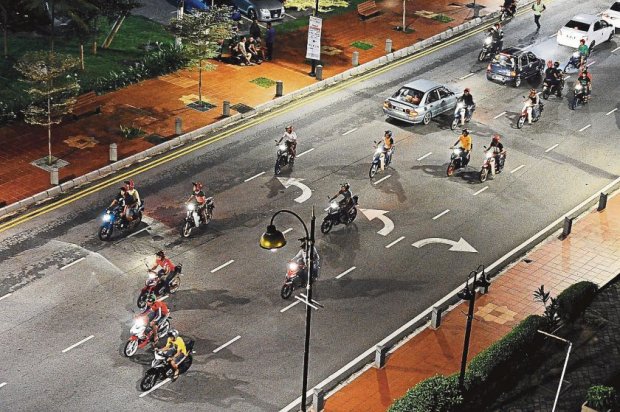 Like Loading...
This entry was posted in Uncategorized and tagged tengku adnan wants to let mat rempit race on KL streets legally. Bookmark the permalink.