MCA clueless over ex-president’s Bersih 4 Down Under stint

MCA is unclear about the reasons behind its former president Dr Ling Liong Sik attending Bersih 4 in Perth, Australia over the weekend.

Party president Liow Tiong Lai told reporters that he would seek a clarification from his former boss regarding this.

“More importantly is that MCA’s stand is clear.

“The party does not encourage its members to participate in an illegal rally,” he was quoted as saying by Sin Chew Daily.

To a question on whether he would act against MCA members, Liow said the party constitution is clear on this matter, and action would be taken according to procedure

Ling, a long time cabinet minister and close associate of former premier Dr Mahathir Mohamad, was spotted at Langley Park where a group had gathered in solidarity with Bersih 4. 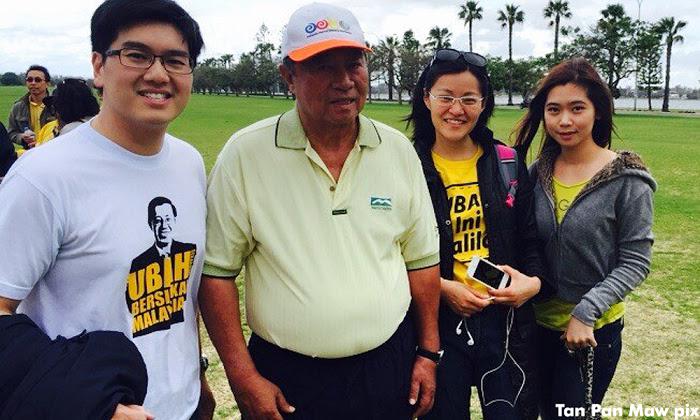 Whether MCA elder leader Dr Ling Liong Sik will be punished for attending one of the global Bersih 4 rallies will be decided by party president Liow Tiong Lai and the MCA top leadership.

This is according to MCA vice-president Chua Tee Yong, who was asked about Ling’s presence at one of the rallies by Global Bersih in Perth, Australia, last Saturday.

“In terms of whether any action will be taken against Tun (Ling), it will be decided by the party or its president, not by me,” Chua told journalists at the MCA headquarters in Kuala Lumpur this afternoon.

Chua said he was at a loss as to why Ling would join the Bersih 4 protest.

“Everyone has his or her own reason to attend the Bersih 4 rally. Some to fight for cleaner elections, some maybe they don’t like PAS, some attend in the hope of toppling the prime minister.

“There are all sorts of personal factors, so I cannot guess why Tun attended the rally. I don’t know why he attended,” said Chua (photo).

Wife confirms ex-MCA chief at Bersih 4, says nothing to fear

Erna Ling, wife of MCA president Ling Liong Sik, confirmed that her husband was at the Bersih 4 rally in Perth, Australia on Saturday.

This was despite MCA secretary-general Ong Ka Chuan imposing a ban on party members from joining the rally.

“He (Liong Sik) had gone through so much, there is nothing to be afraid of,” she was quoted as saying by Nanyang Siang Pau.

Furthermore, Erna admitted that she too joined the Bersih 4 rally in Kuala Lumpur while her husband was in Perth.

Liong Sik’s photograph was circulated on social media after he posed with other Bersih 4 participants at the Perth rally.

Explaining her husband’s presence, Erna said her husband had many former school mates in Perth and some of them had invited him to join the rally at Langley Square.

Erna added that she did not follow her husband to Australia as she had matters to attend to.

However, she joined some of her lawyer friends to attend the Bersih 4 rally in Kuala Lumpur on Saturday.

“But no one noticed my presence,” she was quoted as saying.