Insulting the photos of people you love to hate: Will it ever stop? Never!

Posted on September 1, 2015 by weehingthong

Police will investigate the burning of effigies of DAP leaders at a Kota Baru Umno event, inspector-general of police Khalid Abu Bakar said.

Khalid said the effigy burners will be investigated the same way those who stepped on a picture of Prime Minister Najib Abdul Razak at the Bersih 4 rally last month were probed.

“Yes, we are waiting for reports to be lodged and we will initiate investigation.

“It will be the same as when we investigated those who stepped on prime minister’s photo,” The Malaysian Insider quoted him as saying at the Bukit Aman police headquarters today.

DAP Youth earlier lodged a police report on the matter.

Hunt effigy burners as you did photo stompers, cops told

She said the same urgency must be shown as when police offered a reward for information on the duo who stomped on a picture of Prime Minister Najib Abdul Razak and PAS president Abdul Hadi Awang at the Bersih 4 rally last month.

“What done by Kota Bharu Umno is far worse than stomping on pictures. So may I know if the inspector-general of police is going to take any action against the thugs?” she asked in a statement.

She said the act of burning effigies of DAP secretary-general Lim Guan Eng and his father and DAP veteran Lim Kit Siang “uncivilized and barbaric method” of self-expression.

Kota Bharu Umno chief Mohd Fatmi Che Salleh’s assertion that he did not set alight the effigies also mean little, she said, since the video of the incident ciruclating online shows the torching was pre-arranged.

Couple give themselves up to cops over Najib, Hadi poster stomping

A 21-year-old site supervisor and his girlfriend have surrendered themselves to the police to assist investigations into the stomping of the poster of Prime Minister Datuk Seri Najib Razak and PAS president Datuk Seri Abdul Hadi Awang.

The couple had contacted police yesterday after a statement was issued by the department urging those who were involved in the incident to come forward.

Kuala Lumpur CID chief Datuk Zainuddin Ahmad said they arrived at the police headquarters for questioning at 11am.

“We only recorded their statement. They were not detained,” said Zainuddin.

It is learnt that both were being investigated under Section 505 of the Penal Code for incitement of public mischief.

Sources close to the investigation said both spent about five hours at the Dang Wangi district police headquarters answering a list of questions pertaining to the stomping incident.

None of them were represented by lawyers.

“One of them was a 14-year-old female student, while the other was a 21-year-old supervisor at a construction site,” he told the media on Monday.

THE POLICE HAVE OFFERED A CASH REWARD.

WHO WILL BE THE JUDAS WHO COLLECTS THE 30 PIECES OF SILVER?

Wanted by @PDRMsia . You can run but you can’t hide. #Bersih4 #bersih

PETALING JAYA: Police are on the hunt for seven suspects over the Bersih “picture stomping” incident.

At least seven Bersih 4 participants are asked to come forward and assist with the investigation into an incident where rally-goers were seen stomping on the picture of Prime Minister Datuk Seri Najib Abdul Razak and PAS president Datuk Seri Abdul Hadi Awang.

Mingguan Malaysia today reported those who were under the police radar were participants who were recorded conducting the act.

A source revealed to the Malay daily that some of the suspects were identified of conducting the act in front of other participants in the rally and their actions were recorded as evidence.

SOME PEOPLE CAN DO IT WITH IMPUNITY.. 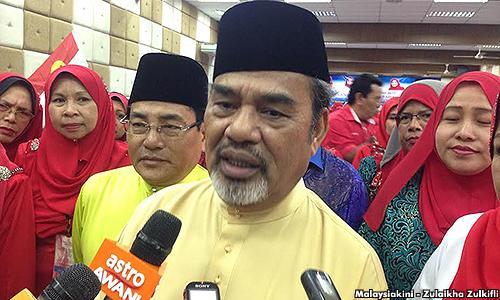 The Bersih 4 participants who stepped on a photo of Prime Minister Najib Abdul Razak would have been “terajang” (thrashed) if Umno did not have any manners, said a supreme council member.

Tajuddin Abdul Rahman, who is also Pasir Salak Umno chief and a deputy minister, said the participants are also fortunate that the Internal Security Act (ISA) had been repealed.

“If we wanted to be rude like them, we would have terajang them… But Umno has manners.

“And unfortunately the ISA has been repealed, if not we could have hauled them up,” he said at the Pasir Salak Umno division annual meeting today.

Tajuddin then joked he was no stranger to the ISA, having been detained under the act for 60 days during Ops Lallang.

“I wasn’t the only one detained, Ahmad Zahid Hamidi has also been detained (under the ISA),” he said, making Zahid who was officiating the division meeting laugh.

“We were young then,” Tajuddin added. 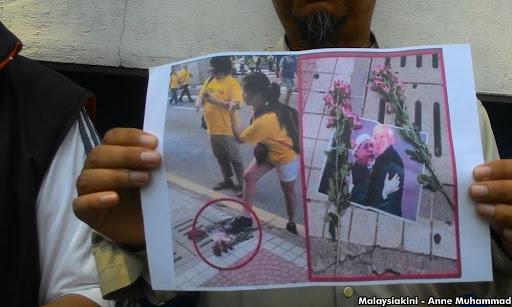 “PDRM must take action according to the law to make sure this issue does not spark a response from any parties that could affect public safety,” he said in the statement, referring to the Malay acronym for the Royal Malaysian Police.

“In connection to this, PDRM urges any party that has information on the perpetrators to come forward and assist in police investigations,” he added.

Rudeness not a crime: Law group on photo trampling

Rudeness not a crime: Law group on photo trampling https://www.malaysiakini.com/news/310959 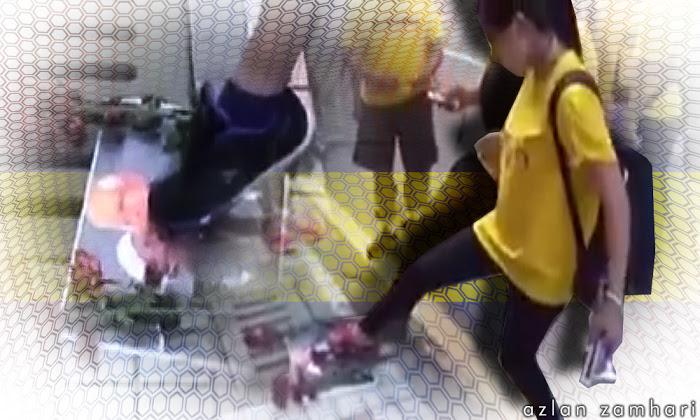 Lawyers for Liberty executive director Eric Paulsen has criticised the police for going after Bersih 4 participants who stomped on a photograph of Prime Minister Najib Abdul Razak and PAS president Abdul Hadi Awang.

“While the act itself may be rude, it is certainly not criminal in nature as the law does not concern itself with trifles.

“Our civilised society will come to an end if any mere abuse, discourtesy, rudeness or insolence like in the present case, a person finds himself or herself exposed to all the trouble and worry of arrest, detention or criminal trial,” he said in a statement today.

Paulsen said there was nothing in the law that elevates the prime minister or the leader of a political party to a special status beyond reproach or mandating them as “protected persons”.

“This witch-hunt against Bersih participants is a serious abuse of the Penal Code as the provisions, archaic as they are, were never meant to protect the PM or public figures from public criticisms or insults.

“This latest incident adds to the alarming increase of cases that were brought against persons who allegedly insulted the authorities or figures seen to be aligned with the authorities,” he said.

In contrast, Paulsen said much worse incidences directed at the opposition, such as threats have been ignored by the police.

Act against Bersih 4 for stepping on PM pictures, groups say

According to Utusan Malaysia today, there were more than 30 reports lodged from these groups which included Umno members in Penang and Pahang as well as a youth group in Selangor among others.

“What happened here involves an effort to sow hatred among the people which is something that should not be done,” Ismail Kassim, a chief for the Penang Balik Pulau Umno division information bureau was quoted as saying after making a police report at the state.

It was reported that the police are investigating into the matter after pictures emerged from Utusan Malaysia and Sinar Harian showing rallygoers stepping on Najib and Abdul Hadi’s images.

‘What about those who defile opposition leaders’ photos?’

The police have been urged not to practise double standards by investigating only those who stomped on the pictures of Prime Minister Najib Abdul Razak and PAS president Abdul Hadi Awang at the Bersih 4 rally in Kuala Lumpur.Why were the police doing so, asked DAP Seri Delima assemblyman RSN Rayer asked, when they had failed to act against those in Umno who had breached the law in even worse ways.

So, why have they failed to act against those in Umno who had breached the law in worse ways?

Rayer urged the police and Home Ministry to act against anyone who flouted the law, even if they were from BN.

“I likewise urge that action be taken on those who have committed more deplorable and despicable acts, such as urinating, setting fire and splashing animal blood on the pictures of opposition leaders,” Rayer told Malaysiakini.

“If you want photographs of these incidents, call me and I will gladly furnish them so that investigations can be initiated immediately against the perpetrators,” he added.

They trampled and trampled by we … … http://www.chinapress.com.my/node/651339 # China today newspaper
Translated by Bing 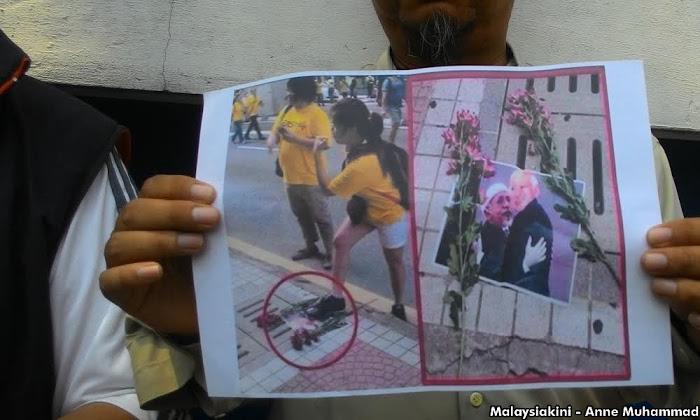 Insulting the photos of Najib and Rosmah has serious consequences

Cops probe ‘slipper for Najib’ protestor UPDATED 7PM He was photographed doing this during a protest outside… http://fb.me/3vWsqJAEo 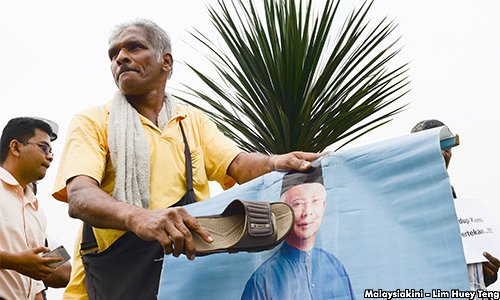 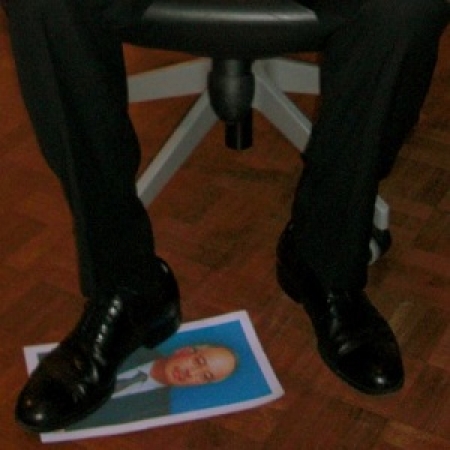 Like Loading...
This entry was posted in insulting photos, stepping on photos, trample on faces and tagged inaulting the photos of najib, stepping on faces. Bookmark the permalink.