‘Flash mobs to go on’

SAMM propaganda director Edy Noor Reduan, who was among 15 individuals arrested on Saturday for organising the first flash mob near the Sogo shopping complex in Kuala Lumpur, said such events should not fall under purview of the Act.

“A flash mob is not an ‘assembly’ as defined under the PAA … If the organiser is required to provide police with a 10-day notice, then the element of surprise will no longer be there,” Edy told theSun today.
…….

dy said the group had planned for several buskers to perform while the crowd would hold up banners and balloons to highlight their demands for free and fair elections.

“It was barely 15 minutes when some 30 policemen started asking the crowd to disperse and eventually arrested us,” he said.

When contacted, Suara Rakyat Malaysia executive director Nalini Elumalai said the requirement under PAA for police to be notified of a gathering should not cause a burden to the organisers.

‘Flash mobs to go on’ 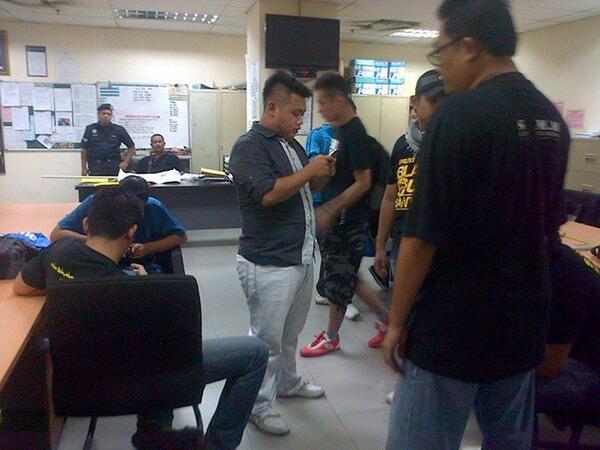 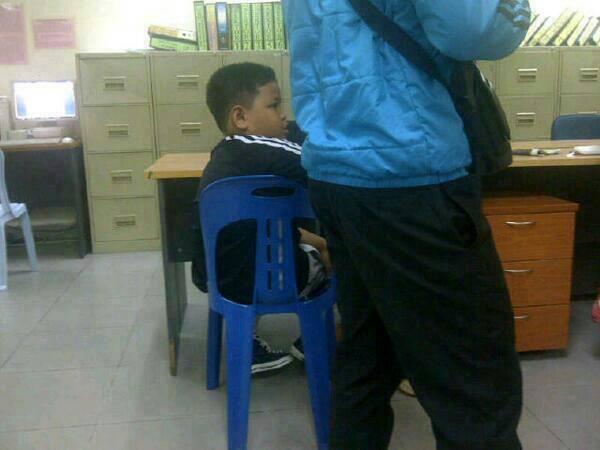 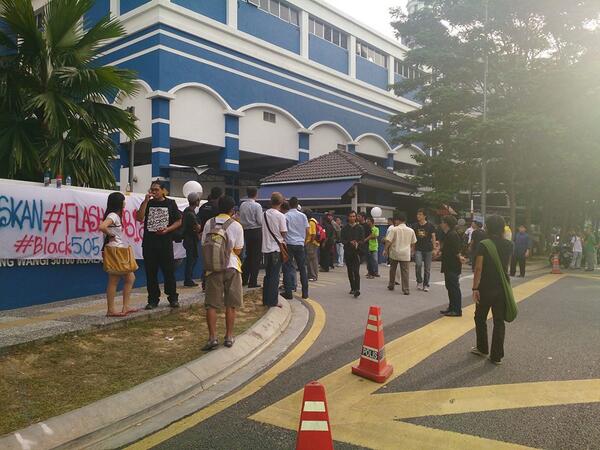 Thank You Auntie Bersih for bailing out the 15 flash mobbers who were detained yesterday.

All are out. #blackout15

The police arrest of 16 participants of the peaceful Black 505 flashmob at the Sogo shopping centre vicinity in Kuala Lumpur, including women and one child, has raised many questions about the role of the police in ensuring public peace and order as well as upholding human rights which are not complimentary to the police force.

The first question is whether it is not possible for the police to ensure public peace and order as well as uphold human rights without having to arrest the 16 people, including women and a child – bearing in mind Prime Minister Datuk Seri Najib Razak’s boast of wanting to make Malaysia the world’s best democracy?

The second question is whether the former Prime Minister, Tun Dr. Mahathir Mohamad is now cracking the whip in the Barisan Nasional government as it is only yesterday that he urged the government to be “tough and not to give face” to the Opposition which he alleged to “continue to insult the nation’s democratic system”?

‘War’ against crime rings hollow, as focus still on the Opposition & not criminals

Last Saturday, Najib launched a highly-publicised war against crime, and the most powerful critique is not that it came four years too late, resulting in crime becoming the number one worry among Malaysians, exceeding their concern about bread-and-butter issues, but that it marked a new fear of crime among Malaysians.

This is the mass armed gang robbery of shop owners and customers at restaurants and eateries, starting with an open air steamboat restaurant in Cheras by a group of 10 persons armed with parangs and iron rods who robbed more than RM20,000 from the owner and patrons, which has been followed up by a spate of similar crimes of mass armed gang robberies at open restaurants in Kepong, Cheras, Kajang and Petaling Jaya in the past few nights.

Crime in Malaysia seems to have reached a level where criminals are not afraid of the police anymore.

Nobody is impressed by the establishment of a Crime Prevention Department, whose first job is to commission an independent international consultant, Frost and Sullivan, to conduct a study on the level of public satisfaction regarding the effectiveness of police service and their sense of security in the country.

This study is to be done in two phases with the first phase expected to be completed by the end of the year. Second phase to take another year?

Are Malaysians, whether in the Klang Valley, Johor Baru and other “black” areas of crime to continue to live in increasing fear of crime, with the unchecked phenomenon of mass armed gang robberies at public restaurants and eateries, until the international consultants Frost and Sullivan have completed their two phases of study in two years?

One by one blackout15 are being released. The ten year old boy is with his father and mother now

15 activists prepared to stand as bailors for blackout15

There are bailors ready outside the station at ipd dang wangi for blackout15.

Three lawyers on the scene with the blackout15. @S_Y_New , @chelle_yesudas and @melissa_ms was in the station by chance and assisted us.

The statements have been taken for all the fifteen

Amongst the questions asked, were if the participants were offered money to join the rally

Retweeted by Lawyers For Liberty
—

7 have gone into take statements. Another 8 to go. Many outside the Balai. They locked the gate pic.twitter.com/vtoDZzx3DC

Retweeted by Lawyers For Liberty 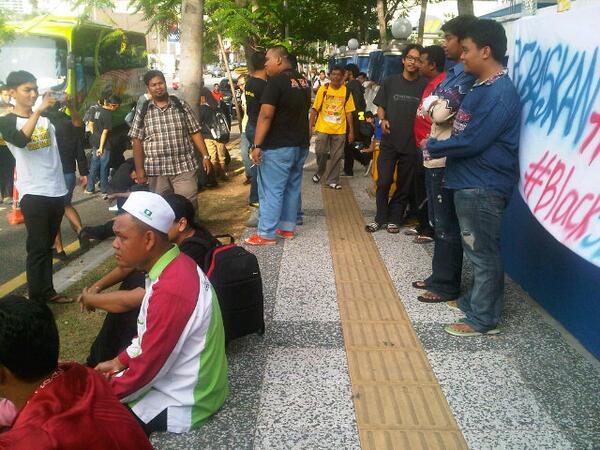 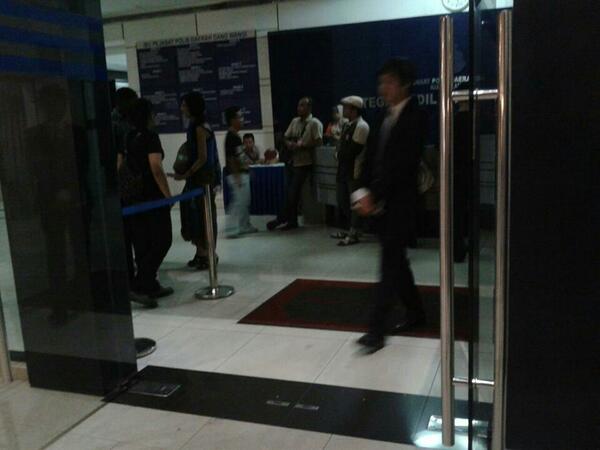 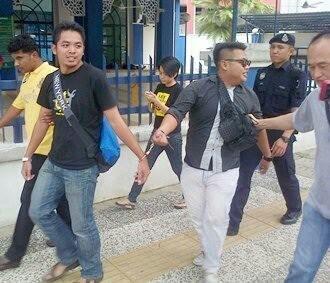 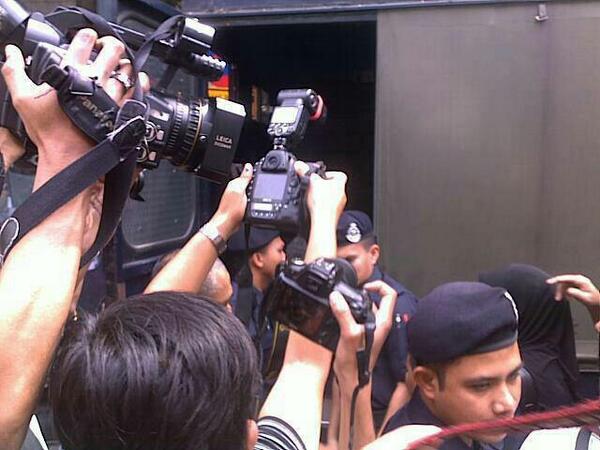 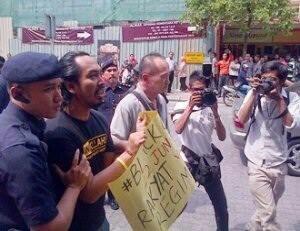 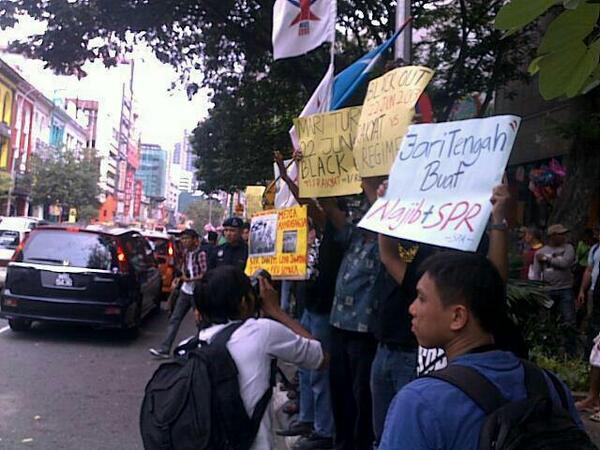 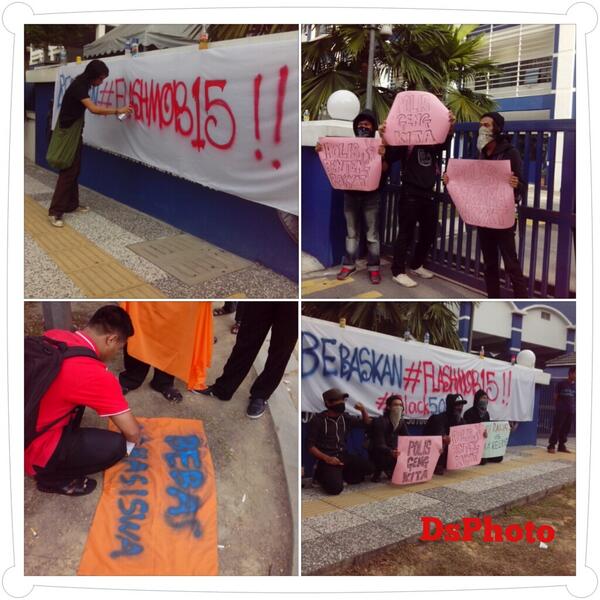 The police have detained 15 participants of the Black 505 flashmob today in a round-up that included a woman and a 10-year-old boy.

The flashmob around the Sogo shopping centre vicinity was intended to build up to the Black 505 rally against electoral fraud on June 22 at Padang Merbok.

A group of 14 were first rounded up and hauled into a police Black Maria in front of Sogo at around 2.50pm.

An officer who identified himself as ASP Shuhaimi said the group will be brought to Dang Wangi police district headquarters.

After the Black Maria departed, two more were picked up – student activist Ekhsan Bukharee (above, handcuffed) and another participant – after they attempted to call on passers-by to gather at Dang Wangi in solidarity with the detained 14.

Two police officers were seen accompanying the duo to Dang Wangi on foot.

According to Bernama,the group is being probed under section 9(5) of the Peaceful Assembly Act.

At about 8pm, all the detainees were being processed for release on police bail later tonight.

Earlier, around 30 people participated in the flashmob that started at 2.15pm – the first of two planned.

They stood in front of the popular shopping centre at Jalan Tuanku Abdul Rahman for about 30 minutes holding placards reading ‘EC chairman step down’ and ‘Come join the June 22 Blackout’.

After the arrests, the remaining flashmob participants, along with the media, gathered in front of Dang Wangi to get updates on the detainees.

Student activist Adam Adli who had also been previously detained for attending a Black 505 rally, was present at the scene.

Police detain flashmob participants in front of Sogo on Saturday.

KUALA LUMPUR: The flash mob, held as a prelude to the Black 505 rally, was short-lived as 13 participants were arrested barely an hour after it started.

“We had warned them to disperse but they refused to do so. They have been detained to facilitate investigations,” he said when contacted Saturday.

Earlier, the flash mob consisting of SAMM and NGOs gathered outside Sogo to urge people to join the June 22 really to be held at Padang Merbok.

“We want to remind the people to participate in the rally to protest the recent election result.

“We have the right to protest. We do not want to cause trouble we just want to express our dissatisfaction,” said Edy before he was picked up by police.

Prior to their detention, the flash mob kicked off with participants singing songs, including “Belaian Jiwa” with accompanied by a guitarist.

They also chanted slogans such as hidup rakyat’ and undur SPR’ while holding up placards and distributing fliers about the Black 505 rally on June 22. As they were about to be arrested, the participants shouted Hidup Rakyat before being whisked away in the Black Maria.

Among others seen at the police station were student activist Adam Adli and other pro opposition supporters.