Eyewitness video record of open vote buying today in Penang by BN. Recorded by a friend & uploaded onto Youtube. Send this to your friends and all fair minded malaysian. Disgusting BN.

WOW!WOW!WOW! Pakatan Rakyat is aiming for a 100,000 crowd attendance in Esplanade tonight……..no free food,no free drinks,no free gifts,no lucky draws.Please bring some cash for the donation box! Latest news at 10.30 pm says the crowd is about 120,000!
Link from you tube http://www.youtube.com/watch?v=zw6AlEiojd0 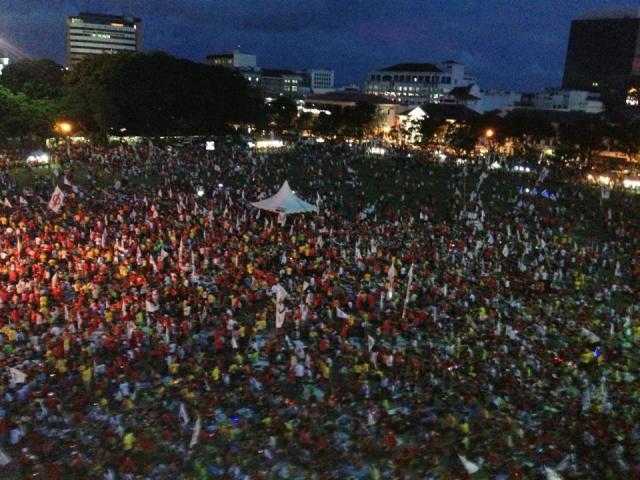 9pm – Penang: About 100,000 people swarmed the Esplanade tonight for a Pakatan Rakyat-organised ceramah, barely 36 hours before polling day on Sunday.

This is in stark contrast to the 10,000 odd crowd which turned up at Rifle Range for a free mega concert and buffer dinner which was later attended by Prime Minister Najib Razak.

The Esplanade event started with a concert where Pakatan leaders including Lim Kit Siang sang songs to protest against money politics allegedly blatant in several constituencies, including that of caretaker Chief Minister Lim Guan Eng.

The crowd was much entertained with snippets of political jokes by PAS deputy president Mohamad Sabu, who later left to meet about 1,000 supporters in Tasek Gelugor.

The Esplanade is filled with chants of “Ubah” and “Ini Kalilah” as the crowd await Guan Eng, the final speaker, who is on his way from Alor Setar.

A man claiming to be a former ‘special aide’ to PKR de-facto leader Anwar Ibrahim and declared that he was quitting the party last week had actually already quit the party twice.

According to Permatang Pauh PKR vice-chairman Abdul Jalil Che Ros, N. Ponnusamy who claimed to have led an ‘exodus’ of PKR’s Indian members in Seberang Jaya was a ‘seasoned quitter’, and had twice declared to the UMNO-controlled media that he was quitting the party.

Abdul Jalil, denying that Ponnusamy held the post of ‘special aide’ to Anwar, said there was also no such post as leader of the ‘Indian members’ of PKR as claimed by Ponnusamy.

It was reported earlier that some 1,200 Indian PKR members from the Permatang Pauh division quit the party to support BN, claiming that the leadership does not look into the community’s welfare.

But Abdul Jalil said the division only has 440 members of Indian background.

He said prior to this, Ponnusamy had declared quitting PKR saying he had lost trust in Anwar’s leadership. And several months back, he announced that he and 200 PKR members from Permatang Pauh were joining DAP to protest against Penang’s deputy chief minister I Mansor Othman, who he accused of ignoring the plight of Indians.

Wednesday’s public holiday opened up for Pakatan Rakyat’s top leaders – including Anwar Ibrahim – a golden opportunity to hold several mammoth ceramah in Johor, attracting tens of thousands and taking its momentum to new heights in the southern BN fortress.

The ceramah at an outdoor car park of a shopping mall at Gelang Patah pulled in some 70,000 Chinese-majority crowd, breaking the attendance of 60,000 people recorded the previous night at the same venue.

Besides the unprecedented attendance, the total donation raised for the day reached a whopping RM263,328.80, comprising RM173,328.80 collected from the ceramah alone and RM90,000 from the series of events held throughout the day at the car park.