When Dato Sri Jamal Yunos got a bloody nose, he cried but we laughed! And now he is charged with rioting….

The offence was allegedly committed in a building of the Ampang Point shopping centre, Ampang Jaya at 4pm on Nov 13, 2016. The charge under Section 147 of the Penal Code provides an imprisonment up to two years, or fine, or both, if convicted.

All of them pleaded not guilty to an alternative charge under Section 14 of the Minor Offences Act 1955 with acting aggressively by crashing into a police barrier and disrupting peace at the same time and place.

On Nov 13, 2016, Jamal lodged a police report claiming he was hit by an unknown individual, causing injury to his face. He said the incident occurred about 4pm when he and 150 of his followers were said to have been trailing Ampang MP Zuraida Kamaruddin who was promoting the Bersih rally at the shopping centre.

AG rejects representation by Jamal and 9 others over rioting

Magistrate sets court date for Red Shirts leader Jamal Yunos, saying original charge and alternative charge still maintained.
.
KUALA LUMPUR: The Attorney-General’s Chambers has rejected the representations from the chairman of the Red Movement NGO Coalition Malaysia Jamal Md Yunos and nine of his followers, who were charged with using violence during a riot at Ampang Point in November last year.

The prosecution, represented by deputy public prosecutor Norhashimah Hashim informed the Ampang Magistrate’s Court here on the matter when the case came up for mention yesterday.

“If the accused still does not plead guilty, request the court to set date for case management. The original charge and alternative charge are still maintained,” she said.

Lawyer Mohd Imran Tamrin, who represented all the accused, did not object and Magistrate Mohamad Firdaus Sadina Ali set Sept 4 for case management.

Earlier, the proceeding which was supposed to start at 9 am waited for Jamal as he was still not in court.

However, when proceeding started at 10.24am, Imran informed the court that Jamal would not be coming as he was not well and the magistrate ordered Jamal to submit his medical certificate to the court by 5pm yesterday, failing which, an arrest warrant would be issued against him.
.

Magistrate Mohamad Firdaus Sadina Ali set the date after deputy public prosecutor Norhashimah Hashim informed the court that the prosecution had received the representation on the charge from the defence.

Jamal, who is Sungai Besar Umno chief and his followers submitted the representation to the Attorney-General’s Chambers to seek a review on the charge against them.

They were represented by lawyer Datuk Mohd Imran Tamrin.

Jamal, nine others charged with rioting over Ampang fracas

Sungai Besar Umno division chief Jamal Md Yunos and nine of his supporters have been charged at the Ampang Sessions Court today for rioting during a Bersih roadshow in Ampang last year.

They were charged under Section 147 of the Penal Code. If found guilty, they can be jailed for a maximum of two years or fined, or both.

They were said to have committed the offence on November 13 at Ampang Point shopping mall.

They also face an alternative charge under Section 14 of the Minor Offences Act for provoking a breach of peace.

Some people hate themselves 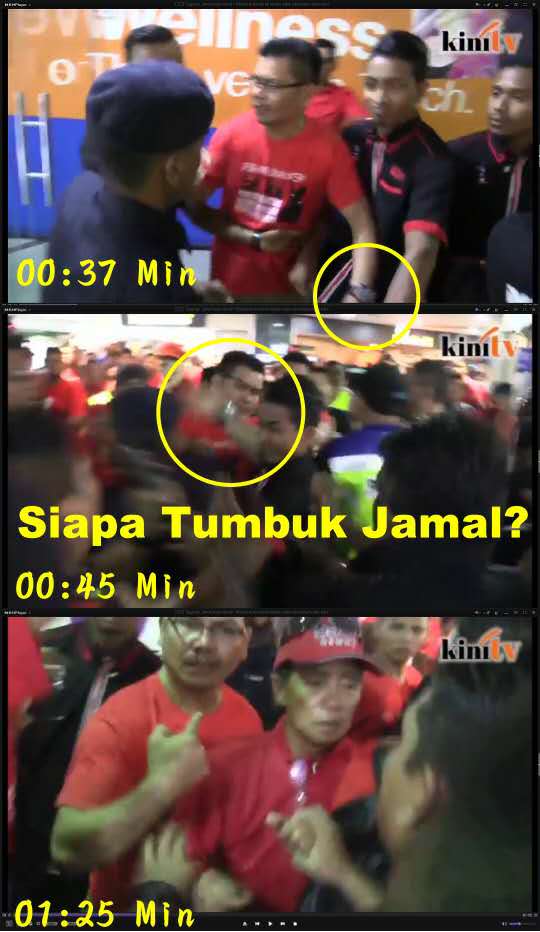 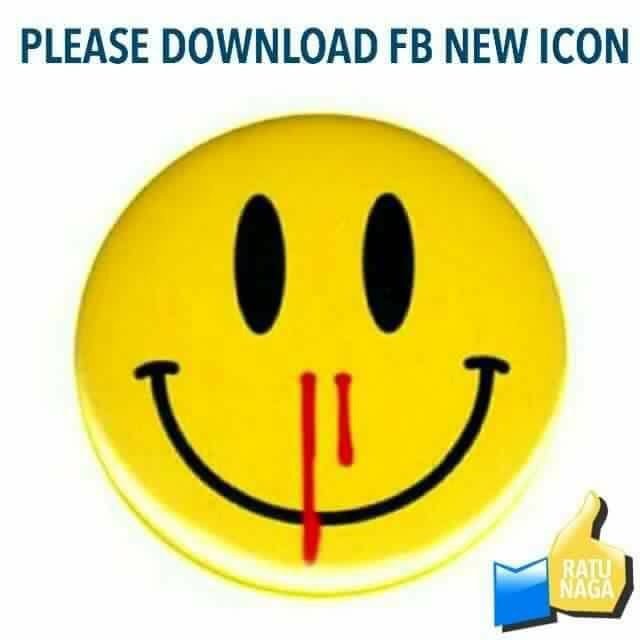 In his police report yesterday, Jamal did not mention Zuraida explicitly and claimed that he was struck by someone in a yellow Bersih T-shirt. From the video footage, the alleged assailant appeared to be wearing dark blue.

The red-shirts leader today claimed his repeated shouts were meant to draw the police’s attention to his “assault”, and he did not accuse the police of hitting him.

Upon examination of the footage recorded by KiniTV, it appears that a fist had made contact with Jamal’s face, causing his head to recoil and almost knocking off his spectacles.

Readers can watch the KiniTV footage, which has been slowed down for clarity, below.

#RedShirt‘s Jamal backtracks on claim police punched him, says he misspoke as he was “filled with emotion”

KUALA LUMPUR: Red Shirt movement leader Datuk Jamal Yunos today clarified that he did not intend to accuse the police of punching him during yesterday’s Red Shirt rally in Ampang.
.
“I was filled with emotion when it happened. I know in the video it sounds like I was accusing the police of punching me, but actually, I wanted to inform the police that I was punched. “I meant to say ‘officers, I was punched’. But at the time, I was filled with so much emotion that the words came out wrong,” he told the New Straits Times.Read More : http://www.nst.com.my/news/2016/11/188525/red-shirts-jamal-backtracks-claim-police-punched-him-says-he-misspoke-he-was

Zuraida hits out at Jamal, likens him to Pinocchio http://dlvr.it/MfhFgg

PKR Wanita chief Zuraida Kamarudin has hit out at Umno Sungai Besar division chief Jamal Yunos for claiming that one of her supporters had punched him during a scuffle at Ampang Point yesterday.

“If anyone rememberd the story of Pinocchio, then he or she will know why Jamal’s nose bled.

“Jamal’s nose was growing longer and longer so he must have bumped into something hard and then started bleeding,” Zuraida said in a statement.

“Out of nowhere a man in a yellow t-shirt punched me. I got a bloody nose because of that,” Jamal told FMT.

Jamal to ‘repay in blood’ for bloody nose https://shar.es/1IyEaw
.

PETALING JAYA: Red Shirts leader Jamal Md Yunos has promised to repay in blood every drop of his blood spilled today when he received a bloody nose in a scuffle at a Bersih gathering in Ampang.

Speaking to FMT, Jamal claimed that he was punched in the face while leading Red Shirt supporters in pursuit of Ampang MP Zuraida Kamaruddin at the Ampang Point shopping centre.

Zuraida and a group of other PKR members had been publicising the Bersih 5 street demonstration planned for Nov 19.

“Out of nowhere a man in a yellow t-shirt punched me. I got a bloody nose because of that,” Jamal told FMT.

“And when I went to a clinic in Ampang later, the doctor told me I have to go to a hospital for further check up, including x-ray.

“I am okay for now, but I promise that every drop of blood I spilled today, will be repaid in blood.”

He thought he could bully a woman 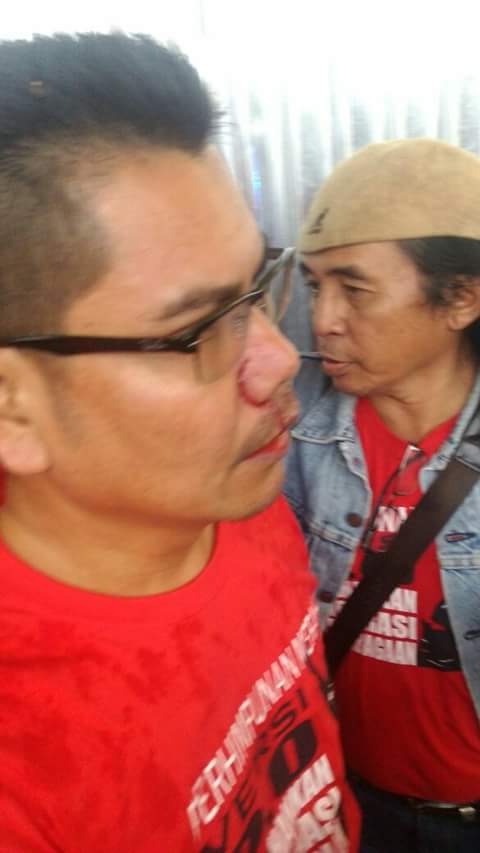 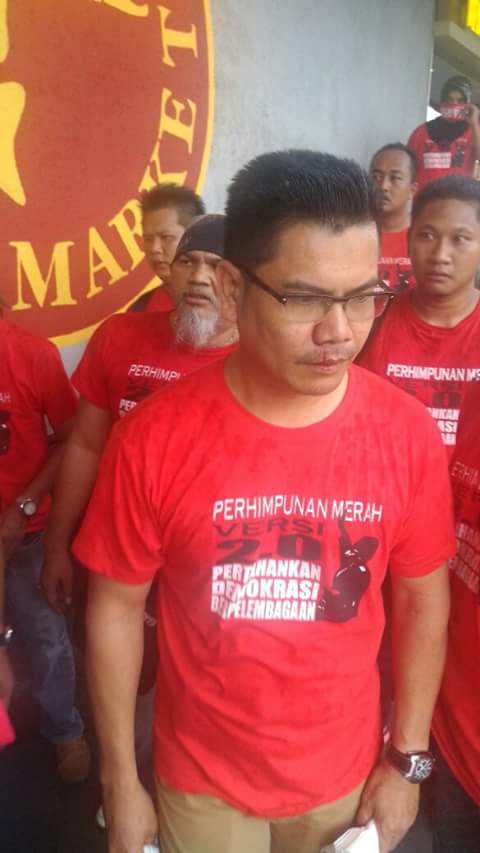 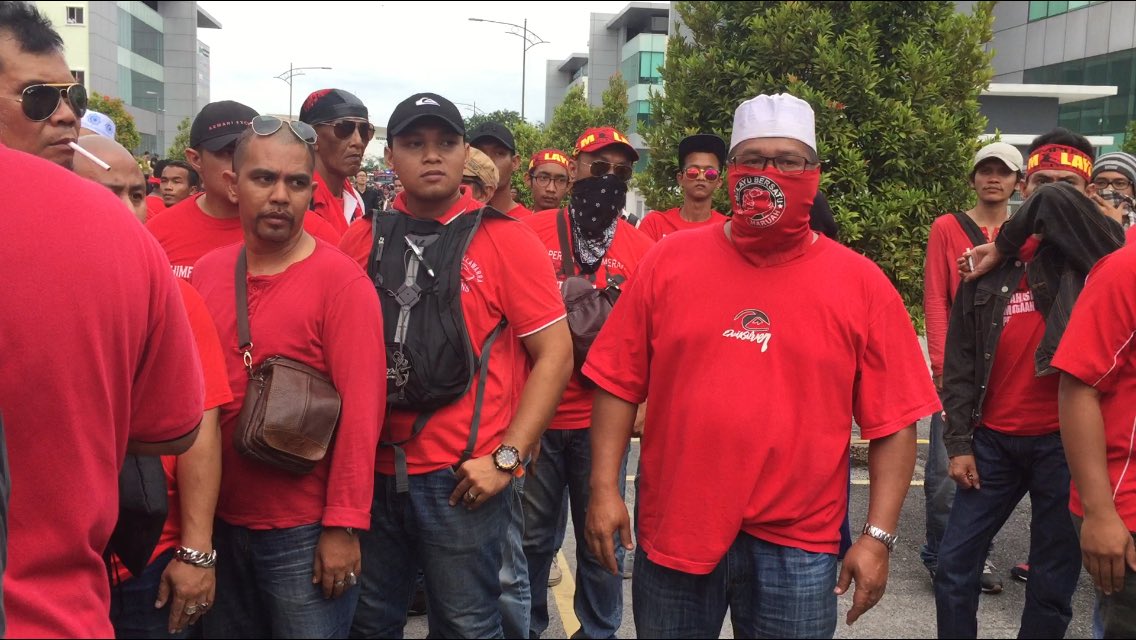 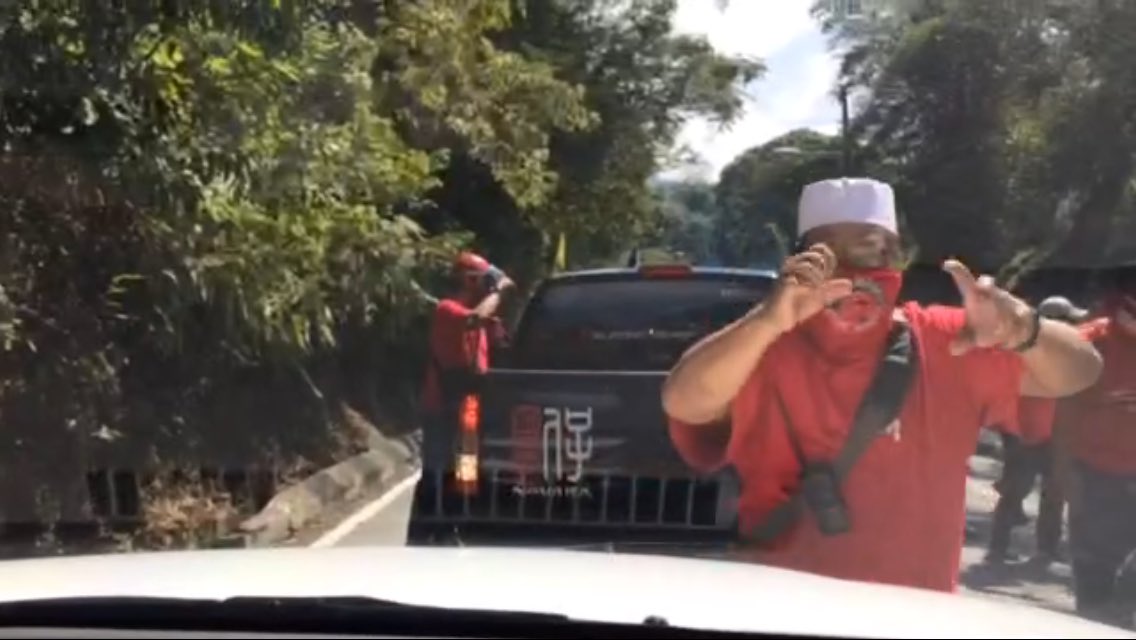 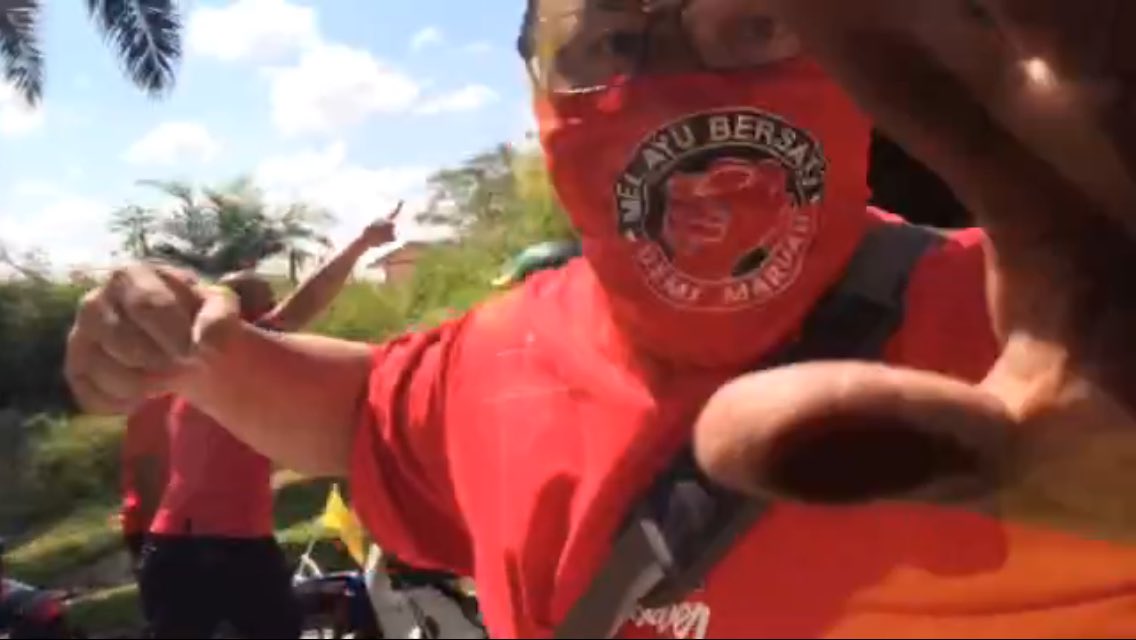 Jamal gets bloody nose as police breaks up scuffle | https://www.malaysiakini.com/news/362704

Sungai Besar Umno chief Jamal Md Yunos got a bloody nose today after he was allegedly punched in the face.

Jamal and his red-shirts posse was pursuing Ampang MP Zuraida Kamaruddin as she and PKR members promoted the Nov 19 Bersih rally at the Ampang Point mall.

A scuffle then ensued during which a blow allegedly landed on his face.

The red-shirts then tussled with police personnel who were blocking the exit way, and at least three of them have been nabbed.

During the scuffle, Jamal can be heard shouting “Polis tumbuk saya (the police punched me)”

However, he later told reporters that “one of Zuraida’s boys” had hit him.

He claimed Wanita PKR chief Zuraida Kamaruddin had given them instructions to do so.

“I am not happy. I will chase them harder than I announced. I will cincang (chop) them,” he said, while gestulating with a chopping motion.

.@ybz99 PKR’s Ampang MP Zuraida says she is unaware and was “running away” from Jamal.

2:18
Zikri Kamarulzaman @zikri
Jamal gets a bloody nose. Says Zuraida instructed one of her boys to punch him. At least 3 reds nabbed in tussle with cops @malaysiakini
0 replies 19 retweets 24 likes

Like Loading...
This entry was posted in Uncategorized and tagged jamal yunos got a bloody nose. Bookmark the permalink.