Bomb: This four-letter word isn’t allowed at KLIA or kila2! 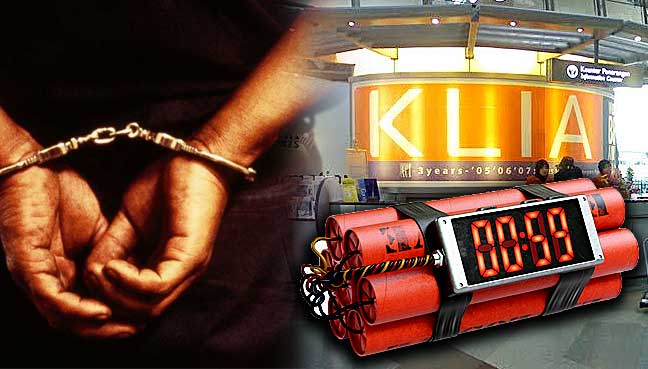 15 passengers have been arrested since early last year.

Its police chief, ACP Abdul Aziz Ali, said uttering “bomb” at the two places would cause an individual to be detained and taken to the Sepang police headquarters (IPD), resulting in one missing the flight.

“They will incur losses when they miss their flight and need to buy new (flight) tickets,” he told reporters at the Sepang IPD here today.

He said the latest case was reported at klia2 two days ago.

He said uttering the word “bomb” was categorised as a threat and it was a serious offence even if it was meant as a joke or showing dissatisfaction, under Code 92 of the Airport Emergency Plan.
…

Abdul Aziz said all 15 individuals had been charged at the Sepang Magistrate’s Court.

“Of the 15 detained, two were foreigners. Most of them were detained by Malaysia Airport Holdings Berhad Auxiliary policemen while at the baggage inspection areas.”

Bomb scares in Malaysia and Singapore: We are all nervous but please don’t blame us…

KLCC Bomb scare: No, you can’t take a chance that it is nothing!

Like Loading...
This entry was posted in Uncategorized and tagged bomb scares, KLIA klia2: no to the word bomb, malaysia, malaysia bomb threats. Bookmark the permalink.