KLCC Bomb scare: No, you can’t take a chance that it is nothing!

MUCH ADO ABOUT NOTHING

It began innocently enough. Four students from Negri Sembilan came to KLCC for a good time. They left the bags lying there between the entrance of the tower and Suria KLCC Ampang entrance and walked off.

Someone saw the bags, became suspicious, and informed the KLCC security unit which called the police, who arrived from the Dang Wangi police headquarters. ThePolice Bomb Disposal Unit came, of course, and so did 3 fire engines from three fire stations, Keramat, Hang Tuah and Unit Hazmat KLCC, and one fire engine from its Hazardous Materials Unit.

What were in the bags? Mostly clothes.

国 油 Twin Tower 4 this afternoon, found a suspicious backpack, blaster robot found at the scene after the tests are clothing, confirmed a false alarm! It’s two boys in order to facilitate the shopping, tentatively will backpack on the door, I didn’t realize… http://bit.ly/1N1fw46 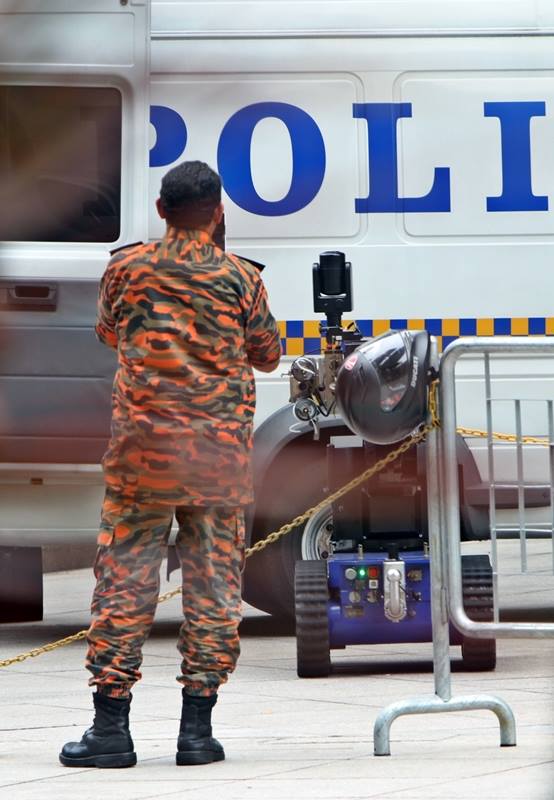 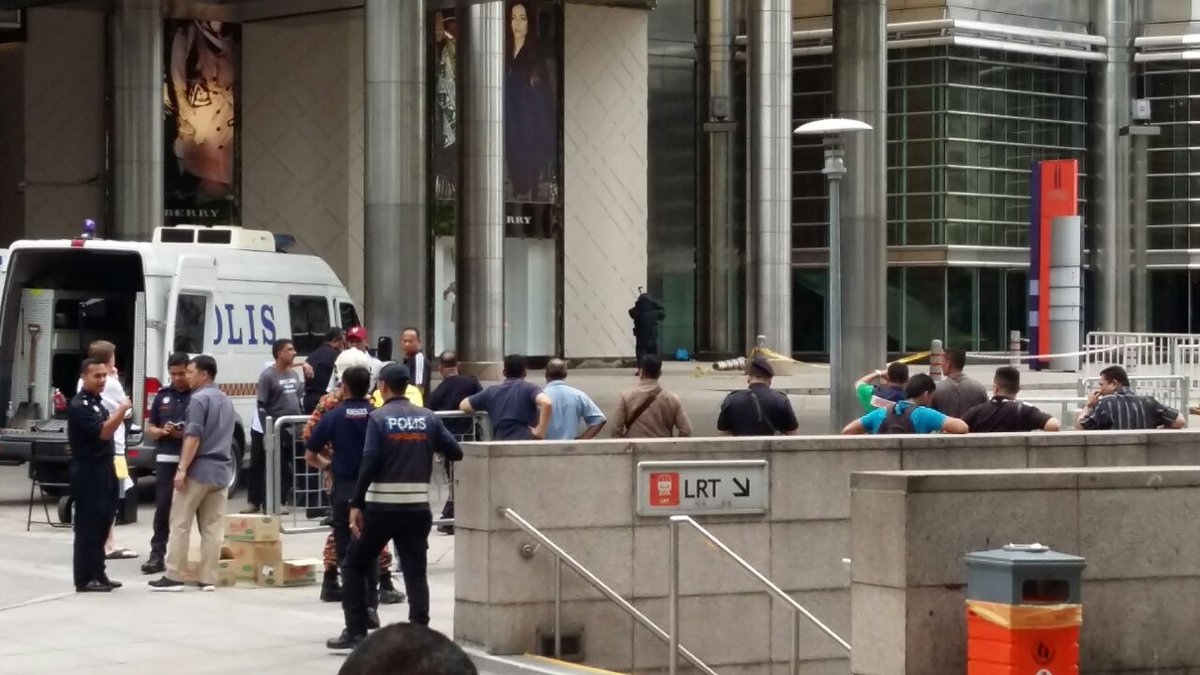 It was learnt that the items, feared to be containing explosives, were found in between the entrance of the tower and Suria KLCC’s Ampang entrance in the morning.

Information received from the city Fire and Rescue Department operations centre stated that three fire engines including one from its Hazardous Materials Unit were despatched to the scene after receiving a request from police at 12.35pm.

Two explosions were heard at about 1.15pm and 1.45pm. It is learnt that the bags were destroyed by the bomb squad using their remote controlled robot as a precautionary measure.

Two boys get 4 a backpack in Kuala Lumpur, double-Breasted Tower Sunshine Plaza before entering the mall, shopping, unexpectedly on backpack has caused panic among the public, to be held by the police at the scene detonated on backpack, end this farce.

Police bring two parcels containing a bag of holding, initially it is suspected a bomb at KLCC, today 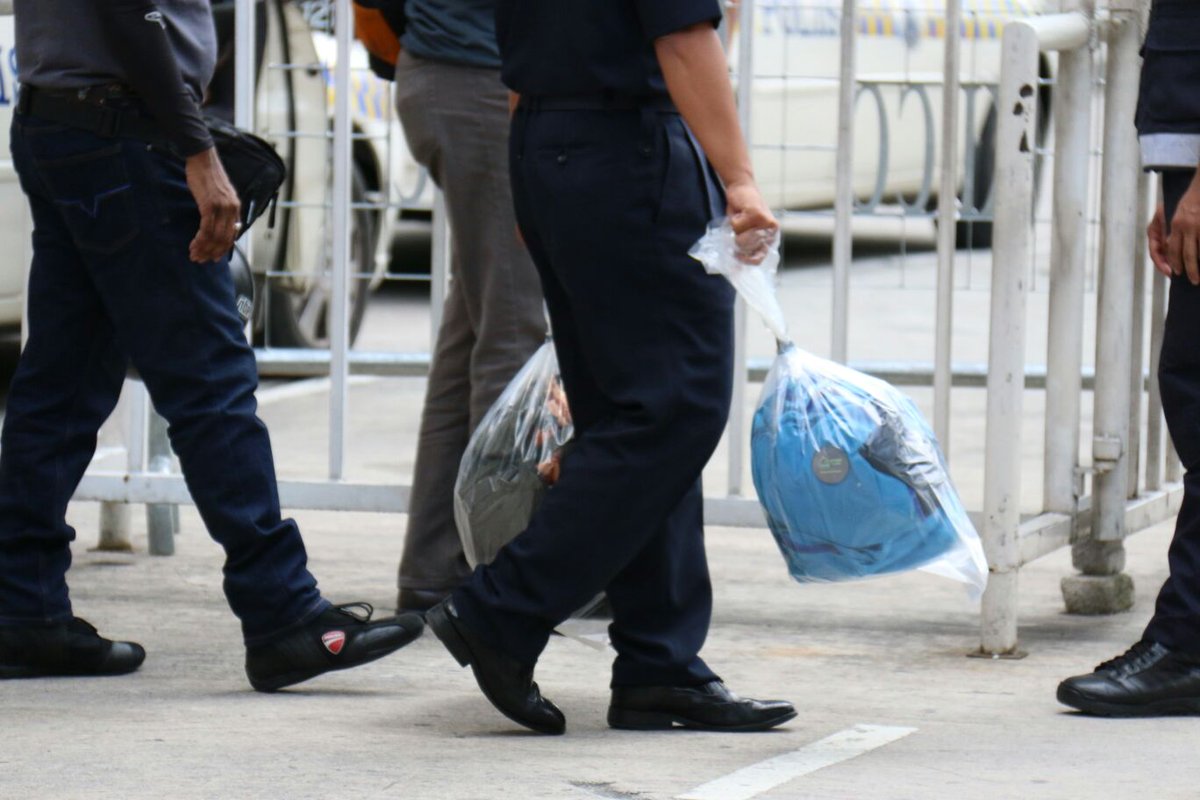 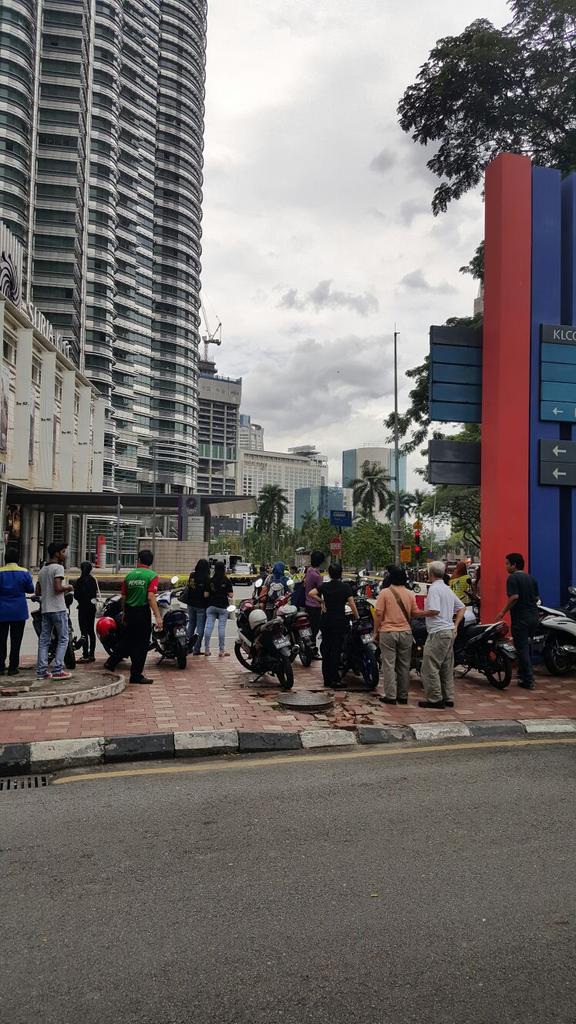 KUALA LUMPUR: The discovery of four backpacks, suspected to contain explosives at the compound of Tower 2 of the Kuala Lumpur City Centre (KLCC) here triggered fear to the visitors of the building today.

However, Kuala Lumpur CID chief Datuk Zainuddin Ahmad confirmed that the bags, which were left abandoned outside the building only contained clothes with no hazardous materials.

“Checks found that the four bags contained teenagers clothes including shirts, pants, a calculator and a box of watch. No explosives or objects resembling bomb was found,” Zainol said when contact by thesun.

He said that police received a distress call on the incident from KLCC security unit at about 10.30am.

“A team of police personnel from Dang Wangi police headquarters and Police Bomb Disposal Unit were dispatched to the crime scene,” Zainol said.

The bags were found unsupervised in between the entrance of the tower and Suria KLCC’s Ampang entrance.

Zainol added that the bags were destroyed by the bomb squad at about 1.30pm using their remote controlled robot as precautionary measure.

“We fired three shots to destroy the bags with the help of police Bomb Disposal Unit,” Zainol said, adding that following the incident, police recorded statements from four individuals, believed to be the owners of the bags.

Zainol added that the 14-year-old teenagers are students from Negri Sembilan who came here for leisure and had left their bags unsupervised there.

3 Responses to KLCC Bomb scare: No, you can’t take a chance that it is nothing!