The police inspector, the woman mastermind and the RM620,00 ‘robbery’…

The bag of cash has still not been found.

Police are hunting a robber who had aided a police inspector in a RM620,000 heist in Bangsar, Kuala Lumpur, The Star Online reported.

Promising “no special treatment or cover up” in the investigations, police said the incident had tarnished their image.

It was reported that two men, allegedly attired in police uniforms and in an official police cruiser, had stopped two employees of a money changer while they were transporting a bag of cash in Jalan Maarof on Wednesday.
…
“We are looking for at least one more person. We believe the man may have posed as a police officer with the inspector during the robbery,” The Star Online quoted Tajuddin as saying.

KUALA LUMPUR, Feb 13 — A woman has been revealed as the mastermind of the RM620,000 robbery involving a detective and a stolen police car.

The 39-year-old despatch officer of a money exchange company was arrested a day after the police inspector was picked up at the Klang Court Complex on Wednesday in an episode that has left the force red-faced.

A police source told Malay Mail the woman provided inside information to another suspect who had then informed the inspector.

She had earlier claimed to be a victim after she and her driver were stopped by two men in a silver Proton Waja bearing the police badge near Jalan Maarof and was robbed of RM620,000 while transporting the money to her employer’s outlet in Sunway Pyramid.
…
The source said the woman was arrested at the Pantai police station after providing her statement.

“Her statement raised many questions and police immediately detained her and seized three mobile phones from her.”

“Police are now looking for the mutual friend, a man aged 37, who is believed to be in possession of the money. The suspect also has another accomplice.”

The source said the suspect had impersonated a policeman while accompanying the inspector during the robbery.

It is understood the inspector had confessed his involvement in the case during interrogations. 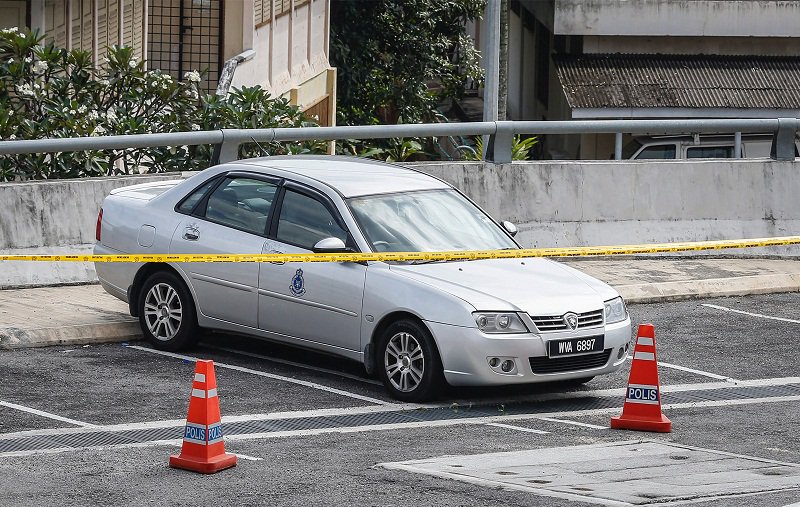 KUALA LUMPUR — Two men in full police attire stole a detective’s vehicle at the Klang Court complex and used it to rob two money exchange employees of RM620,000 in Bangsar on Wednesday.

A police inspector with the criminal investigation department, who had left the car at a restricted area at the complex, is being questioned. Another officer, also from the South Klang police headquarters, is being sought.
…

The drama unfolded after a 39-year-old female despatch officer and a driver of the money exchange company were on their way to transport RM620,000 to their outlet in Sunway Pyramid.

As soon as they left Pelangi Brickfields Condominium in Kuala Lumpur in a Honda car, they were stopped by two men in police uniforms driving an official car near Jalan Maarof, Bangsar.

“One of the men got down from a silver Proton Waja that had a police badge and asked for the driving licence and the woman’s identity card,” a source said.

Both suspects then searched the car and found the bag of cash.

The woman told police the men questioned them about the money, to which she said it belonged to her employer.

“They grabbed the bag and told them to go to Bukit Aman to explain why they were carrying such a large sum of money,” the source said.

When the victims wanted to follow the robbers to Bukit Aman, they were threatened.

“The men told the victims they would handcuff them if they insisted on accompanying them to Bukit Aman.”

They fled with the bag of cash and the victims’ personal documents.

The employees drove to Bukit Aman to locate the duo but were unsuccessful.

The despatch officer then lodged a report at South Klang police headquarters the same day after they were informed that the police car was from there.

The source said: “The last person who drove the vehicle to the Klang Court complex was an inspector from the district’s criminal investigation department.

“When questioned, the inspector denied involvement in the robbery. He said the car broke down and he had no choice but to leave it at the court complex.”

The restricted zone at the complex is only accessible to police officers and court staff.

A security guard on duty told Malay Mail yesterday the inspector was a familiar face at the complex.

“Between 7pm and 8pm, I saw him in a car leading a tow truck that was bringing a Proton Waja police car to the parking lot at the restricted zone,” said the guard, who requested anonymity.

“I found it odd for him to come to the court complex at that hour but I didn’t think too much about it.”

He said the inspector and the tow truck operator left soon after.

“An hour later, the inspector returned to the court complex but this time he was alone. I saw him approaching the car but he stopped when he saw several policemen inspecting the vehicle.”

The inspector was then surrounded by some 15 police officers, he said, adding he did not know what happened next.

A police officer has been arrested for allegedly stealing RM620,000 from a money changer in Bangsar, KL.An employee and a driver were reportedly on their way to transfer the money from one branch to another branch, when they were intercepted by a police car.

2 policemen, who were in full uniform, then reportedly seized the stash of money, claiming it looked suspicious, and they would bring it to Bukit Aman.

The authorities are still looking for the 2nd police officer involved.