Football in Malaysia is EXPLOSIVE! We mean the fans, not the game or the national team. 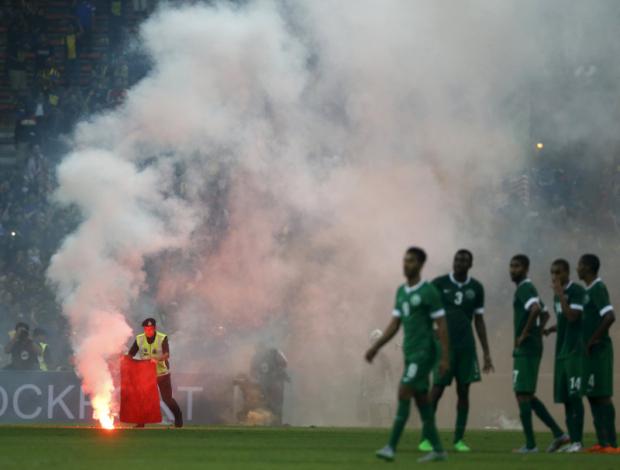 …
LAUSANNE, Oct 5 — World governing body FIFA today announced a series of sanctions against the Football Association of Malaysia (FAM) as punishment for the crowd trouble that wrecked the World Cup qualifier against Saudia Arabia on September 8.

Militant fans angry at the 10-0 humiliation in a previous match to the United Arab Emirates fired flares billowing orange smoke at Shah Alam Stadium as Malaysia trailed the Saudis 2-1 in the final minutes of the tie.

Players and officials then hurried from the field and Saudi fans ran from the stands as flares flew around the stadium. Eleven people were arrested but no one was reported injured

FIFA’s Disciplinary Committee said in a statement that their investigation of the incidents showed that FAM was “liable for the spectators behaviour.”

As a result Malaysia’s next home match — a World Cup qualifier against the Emirates on November 17 — is to be played behind closed doors, FAM is to be fined 40,000 Swiss francs (RM180,000) and issued with a warning.

Furthermore, the committee decided that the match be declared to be lost by forfeit by Malaysia 0-3. 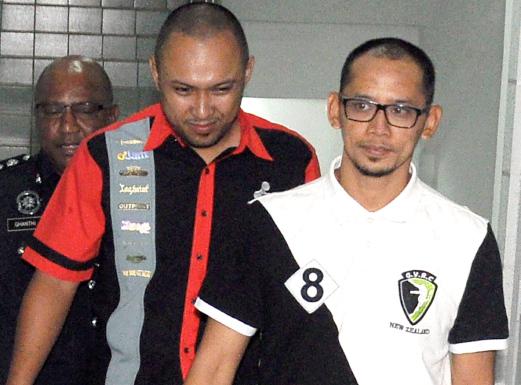 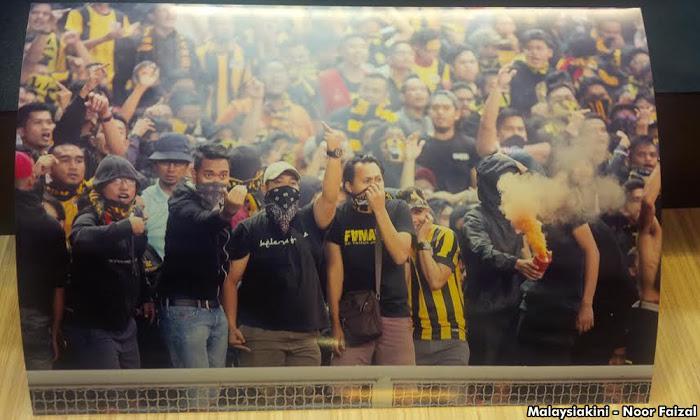 Two ‘Ultras Malaya’ supporters, including the group’s leader, were charged in the Magistrate’s Court in Shah Alam today with rioting during the match between Malaysian and Saudi Arabia in the World Cup 2018/Asian Cup 2018 qualifier at the Shah Alam Stadium last week.

They were charged together with several others who are still at large with rioting by throwing flares and smoke bombs onto the pitch and letting off fireworks.

They were accused of committing the offence at Quadron C, Shah Alam Stadium, in Section 13 in Shah Alam at around 10.50pm on Sept 8.

They were charged under Section 147 of the Penal Code and are liable to jailed up to two years or fined or both, if convicted.

‘It had to be done,’ Ultras Malaya says amid probe on ruckus at Malaysia-Saudi match

“It had to be done,” @ultrasmalaya07 says amid probe on ruckus at Malaysia-Saudi match http://tdy.sg/1EPVNqy 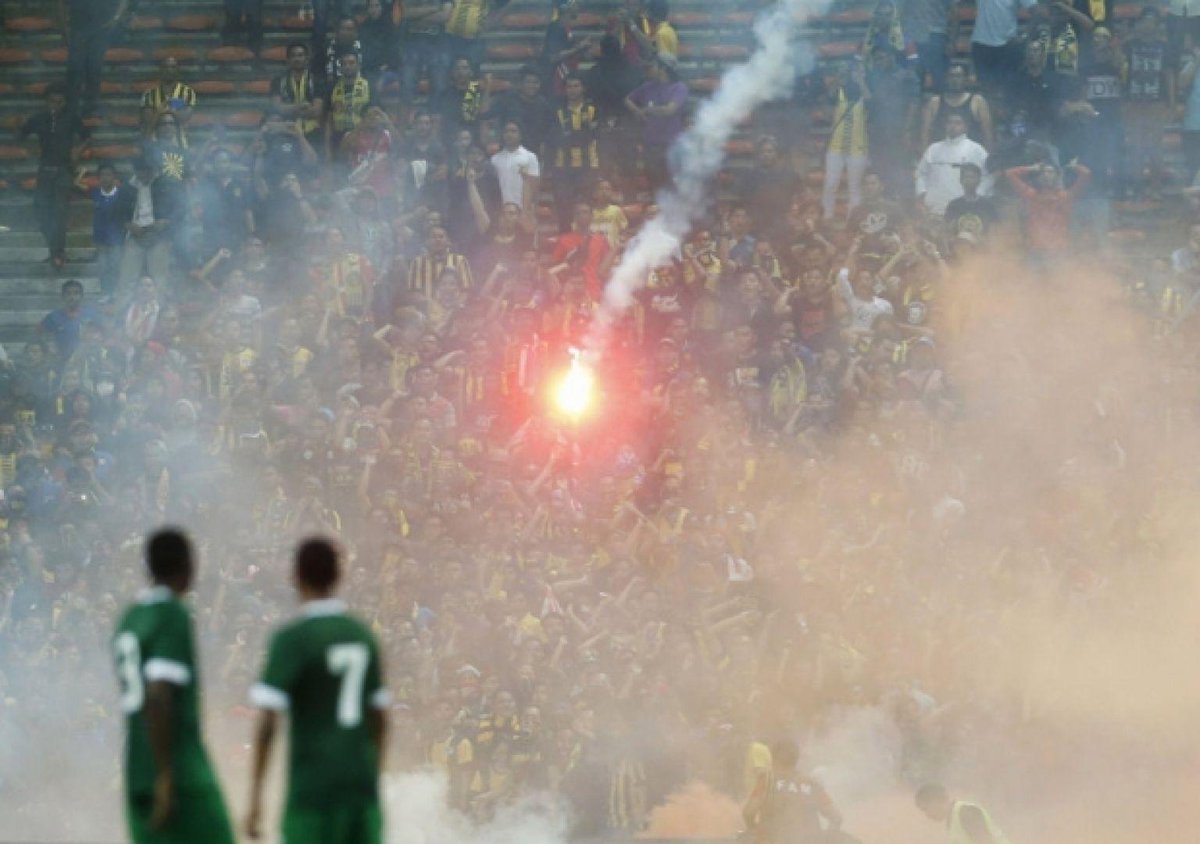 KUALA LUMPUR — Ultras Malaya appears to have admitted to having had something to do with the chaos that prematurely ended Malaysia’s World Cup qualifying match against Saudi Arabia on Tuesday night, as the hardcore local football support group took to Twitter to justify the incident.

Posting under the handle @ultrasmalaya07, the group was apologetic to football fans in both countries but argued that they have gone through all the “proper channels” to demand reform in the Football Association of Malaysia (FAM), to no avail.

“Sorry players. Sorry Malaysian. Sorry Saudi Arabian. But it have to be done,” the group said in a tweet two days ago.

Ultras Malaya stressed in a follow-up tweet that they have actively voiced out their dissatisfaction over what they claim to be FAM’s dismal management of Malaysian football over the past three decades, stating that they have held post-match protests and demonstrations at the FA’s headquarters and even sent out petitions. “

“You people forgot last year we campaigned #RombakFAM before congress. Pressured FA delegates. Met candidates. The proper channel as you said,” the group wrote in Malay in another tweet, referring to their campaign calling for a complete revamp of FAM during the association’s elections last year. 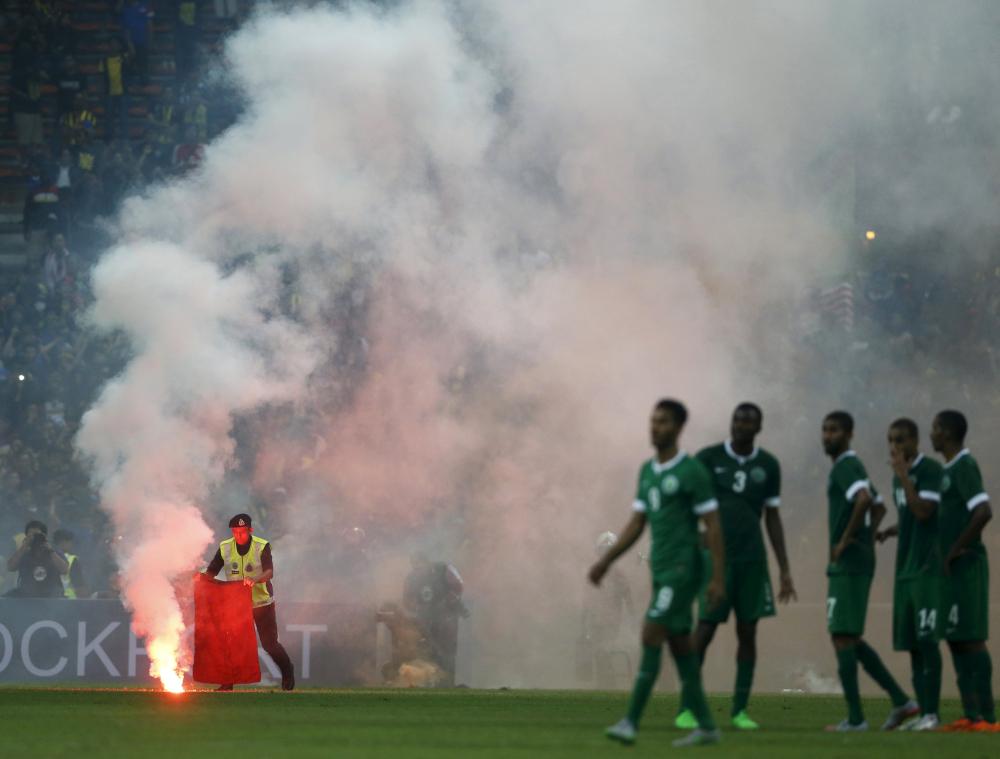 The Selangor police have set up a special task force to track down the individuals involved in the commotion during the football match between Malaysia and Saudi Arabia at the Shah Alam Stadium, on Tuesday.

He said the team would also investigate how and who was responsible for bringing banned items, such as flares and firecrackers, into the stadium.

“We are looking into the recordings of the incident obtained from the police on duty, media and the public,” he told reporters after the disposal of gambling machines at the Ara Damansara police station today.

According to him, the total number of individuals arrested so far in relation to the commotion remained at 11. – See more at: http://www.themalaysianinsider.com/malaysia/article/special-police-task-force-to-track-down-shah-alam-stadium-troublemakers?utm_source=dlvr.it&utm_medium=twitter#sthash.9xc7r5R0.dpuf 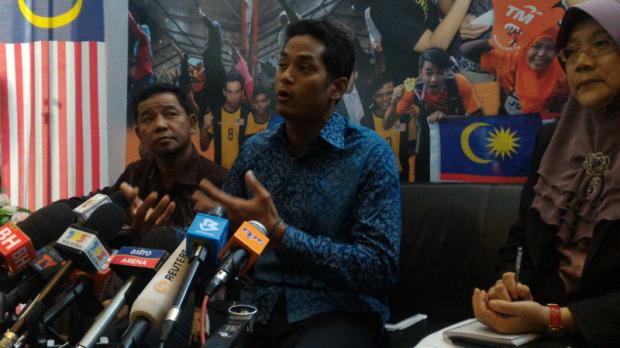 He said national sports commissioner Datuk Zaiton Othman had already issued the order through a letter sent yesterday to FAM, which will have 14 days from the date of the letter to respond.

“Once the commissioner gets the report, then Datuk Zaiton can take whatever action necessary,” Khairy said at a news conference here.

“This includes provisions under Section 20(1)(6) to deregister or suspend a sports body that does not rectify any malpractice, misconduct or irregularity by its office bearers or members within the period specified in the written notice given by the Commissioner,” he added, referring to the Sports Development Act 1997.

Khairy said his ministry has gathered “a lot of intel, proof and information” pointing at FAM’s alleged failure to heed prior warnings that the incident was going to happen.

FAM, however, made no effort to stop the incident from happening even with the information in hand, he added.

Amok at Stadium Shah Alam: Ultras Malaya supporters give their side of the story

Amok at Stadium Shah Alam: Ultras Malaya give their side of the story http://bit.ly/1K6BO2x 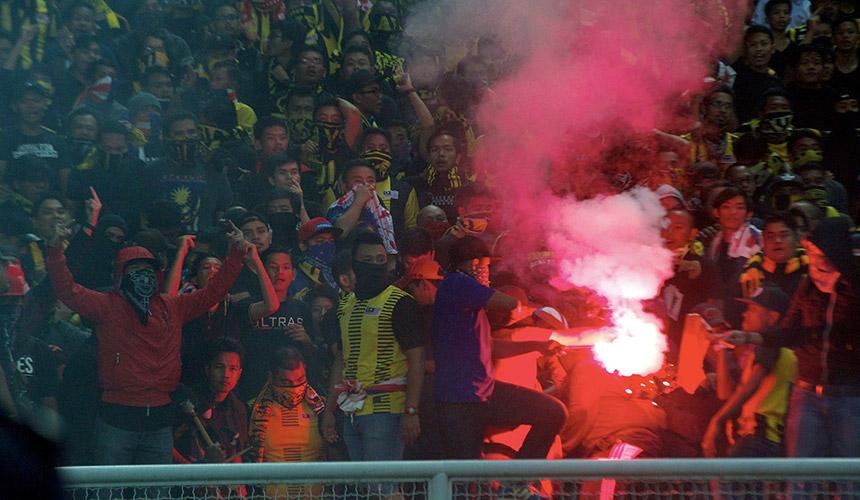 The actions of a group of hardcore football fans were quickly labeled as shameful, tarnishing the country’s good name, but for this group of supporters known as Ultras Malaya, it was their last resort.
…
While many criticised their violent actions, others observed this as an effective method of amplifying the voice of supporters of local football, to those in charge of the sport here in Malaysia.
…
Some of these netizens even questioned the relevance of ‘using the right channel’ to voice one’s opinion, reasoning that fans did use the right channel to voice their case, but to no avail.

After a 10 nil thrashing, is this our way of saving Malaysia from another defeat?

Hahahah it may be a joke but make it go viral please! http://fb.me/7G2yzWrvW

“When I saw those Malaysian football thugs throwing flares and punching Saudi supporters, I thought, ‘this is not how brotherly nations should treat each other!’  I’m seriously wondering why I helped the Government win the last election and fight Isis by putting RM2.6billion in the PM’s personal account!”

The match was halted after a group of supporters threw objects onto the pitch.

A group of fans known as Ultras Malaya allegedly threw flares and fireworks onto the pitch during the 87th minute forcing the referee to stop the game.

When asked if the 11 arrested were part of the Ultras Malaya, Shah Alam OCPD Asst Comm Shafien Mamat declined to comment.

He said police would investigate how the flares and fireworks were smuggled into the stadium. 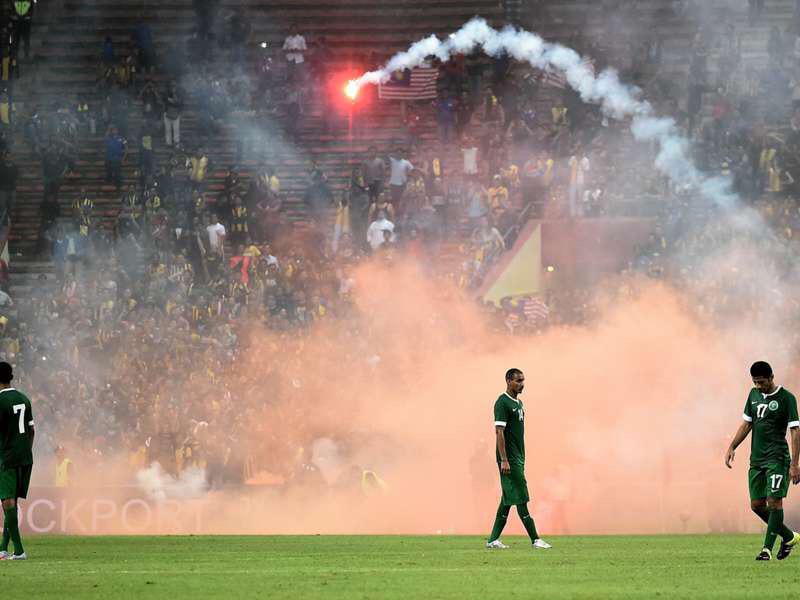 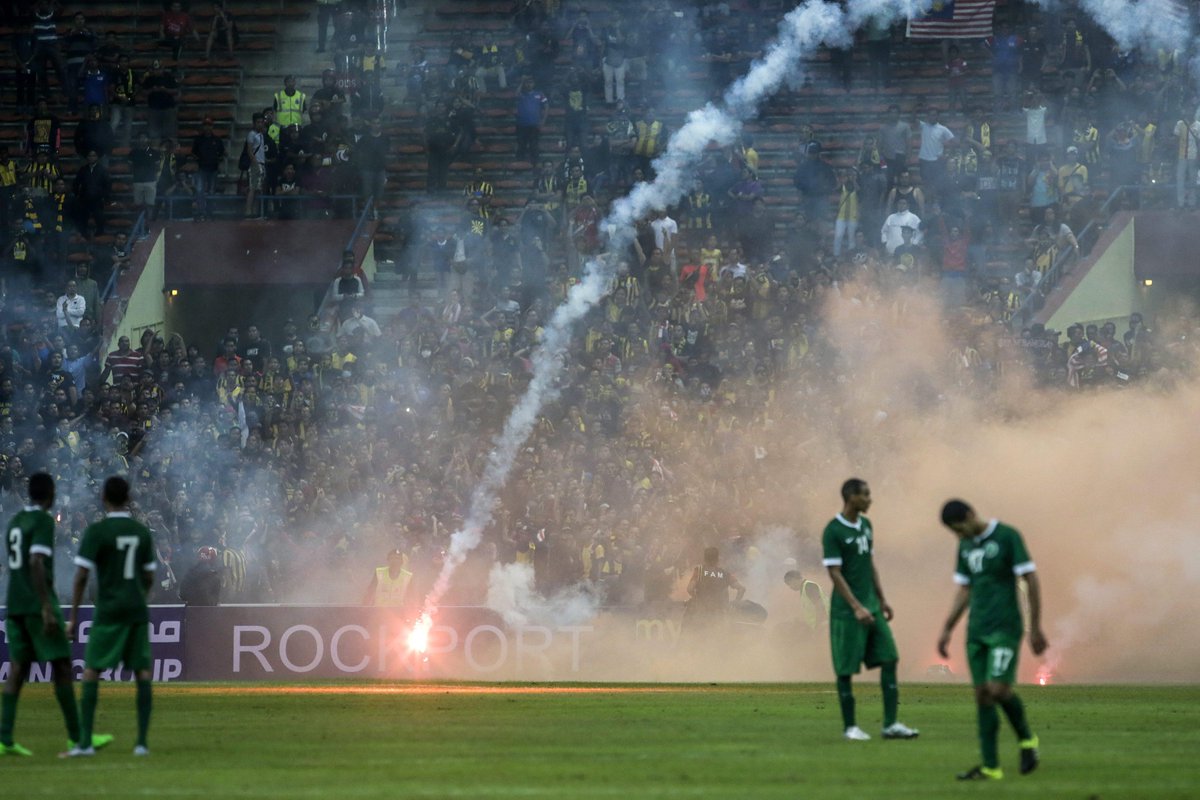 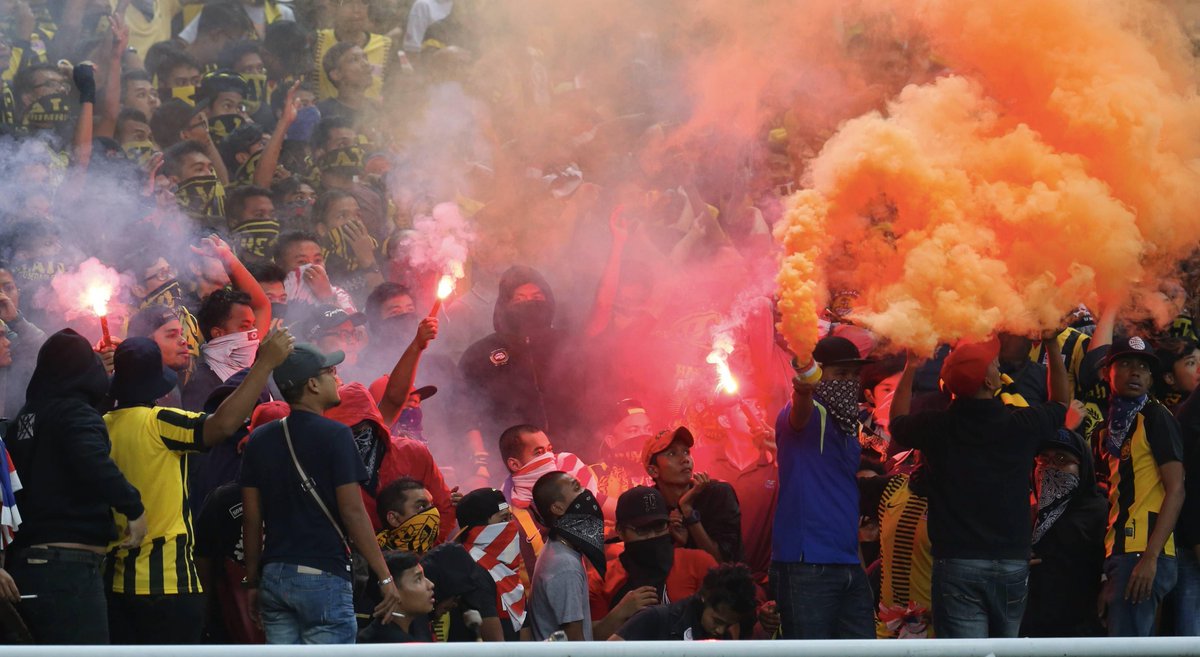 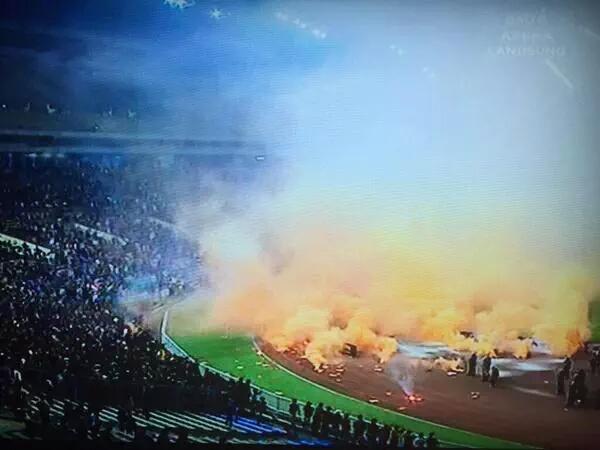 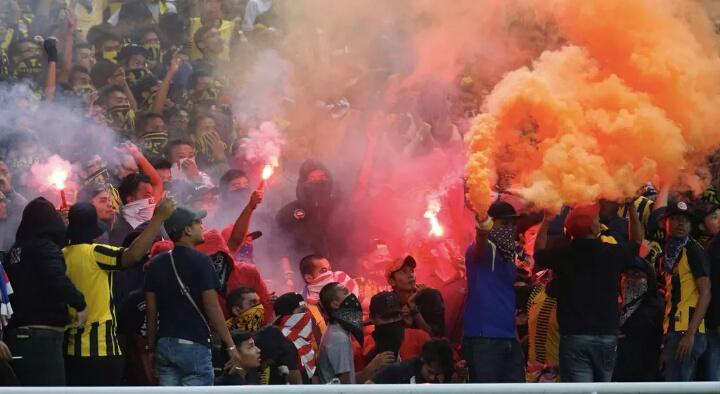 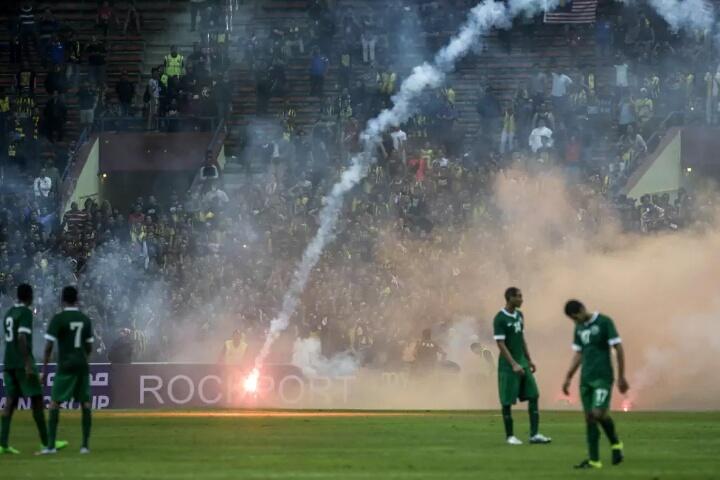 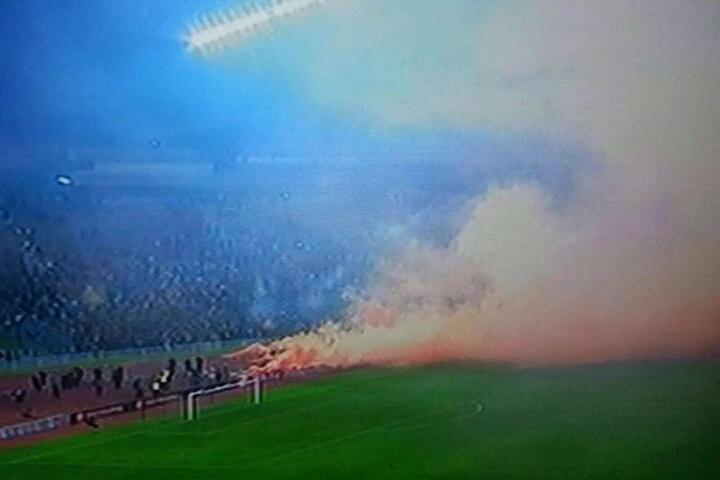 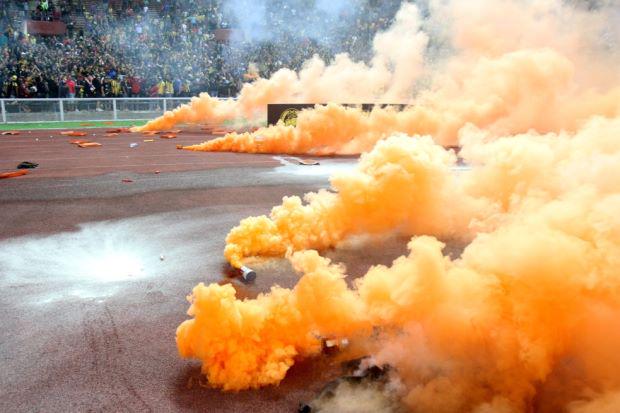 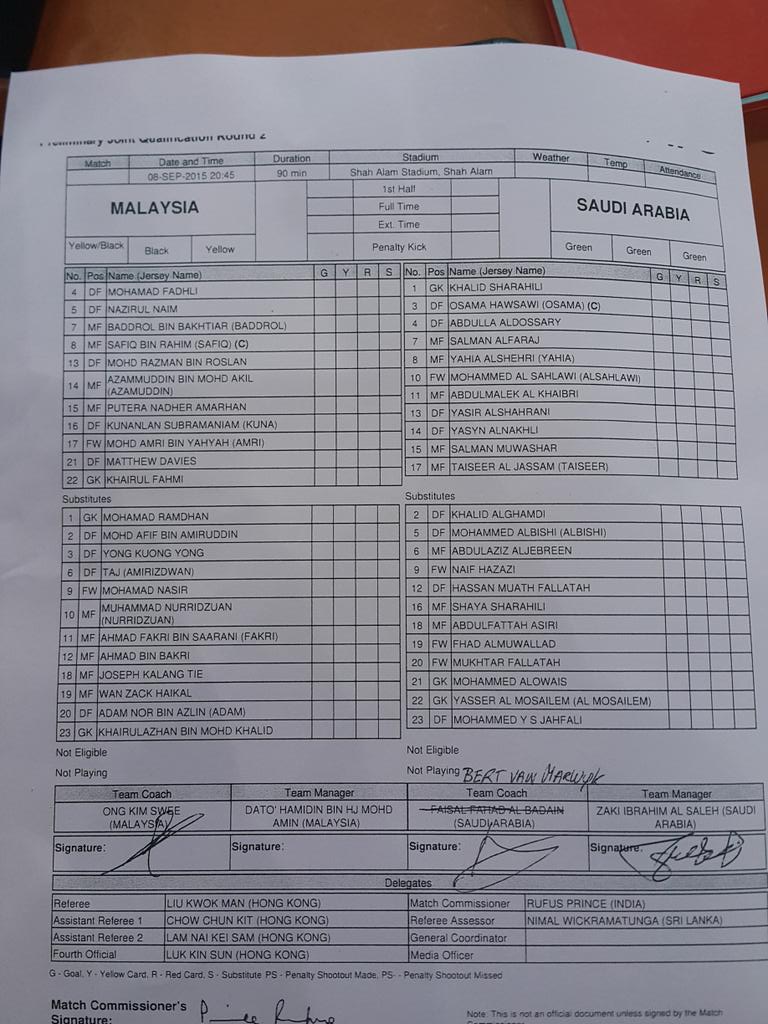 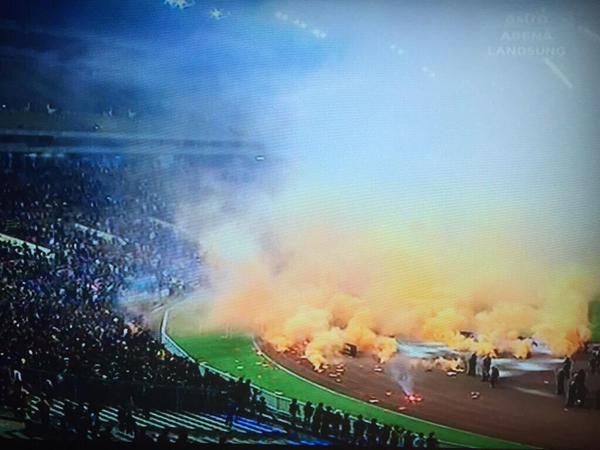 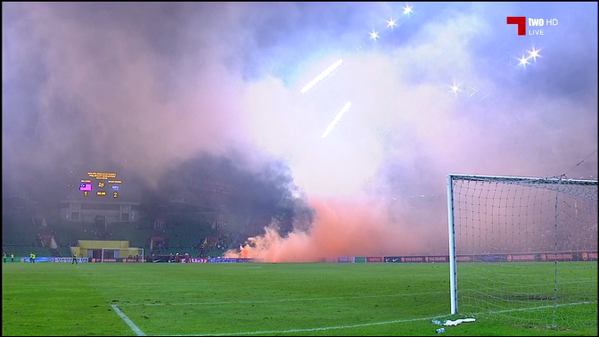 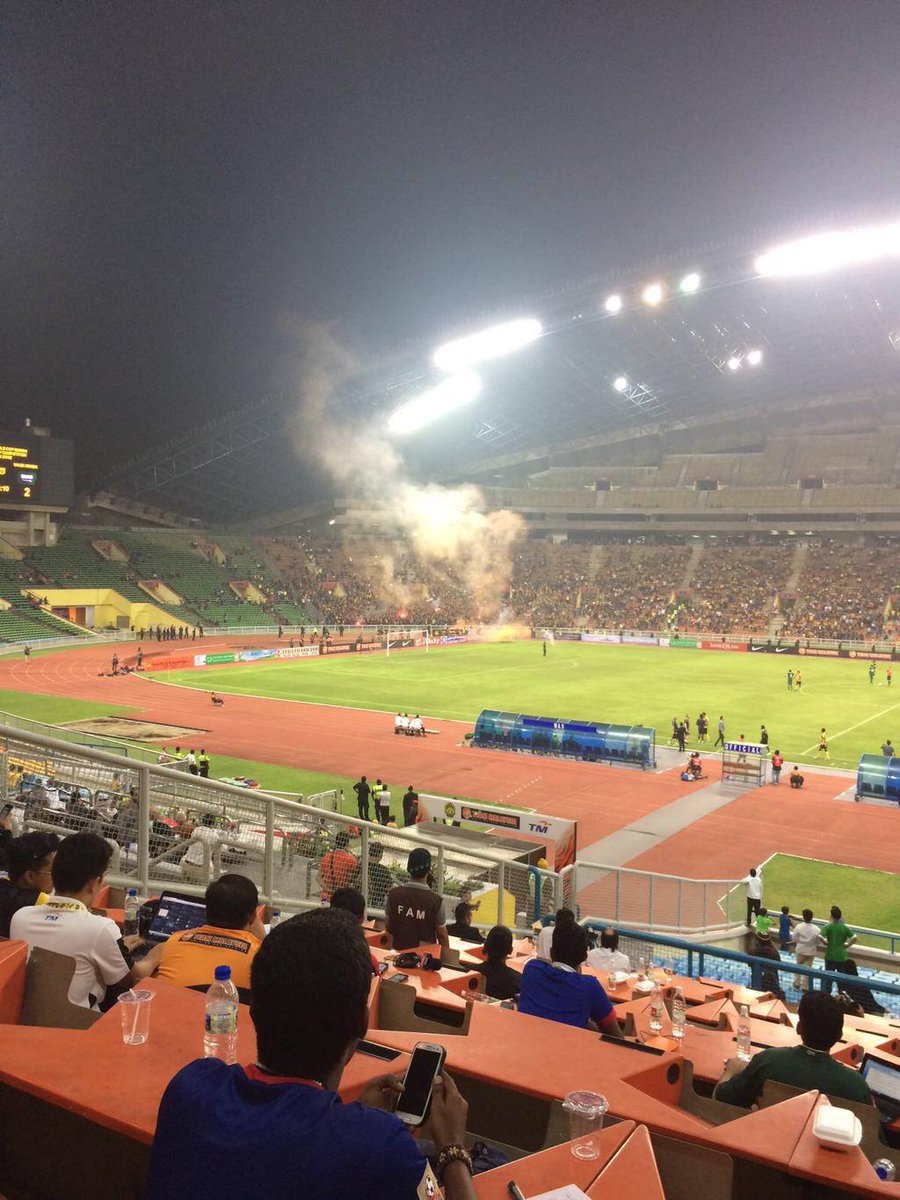 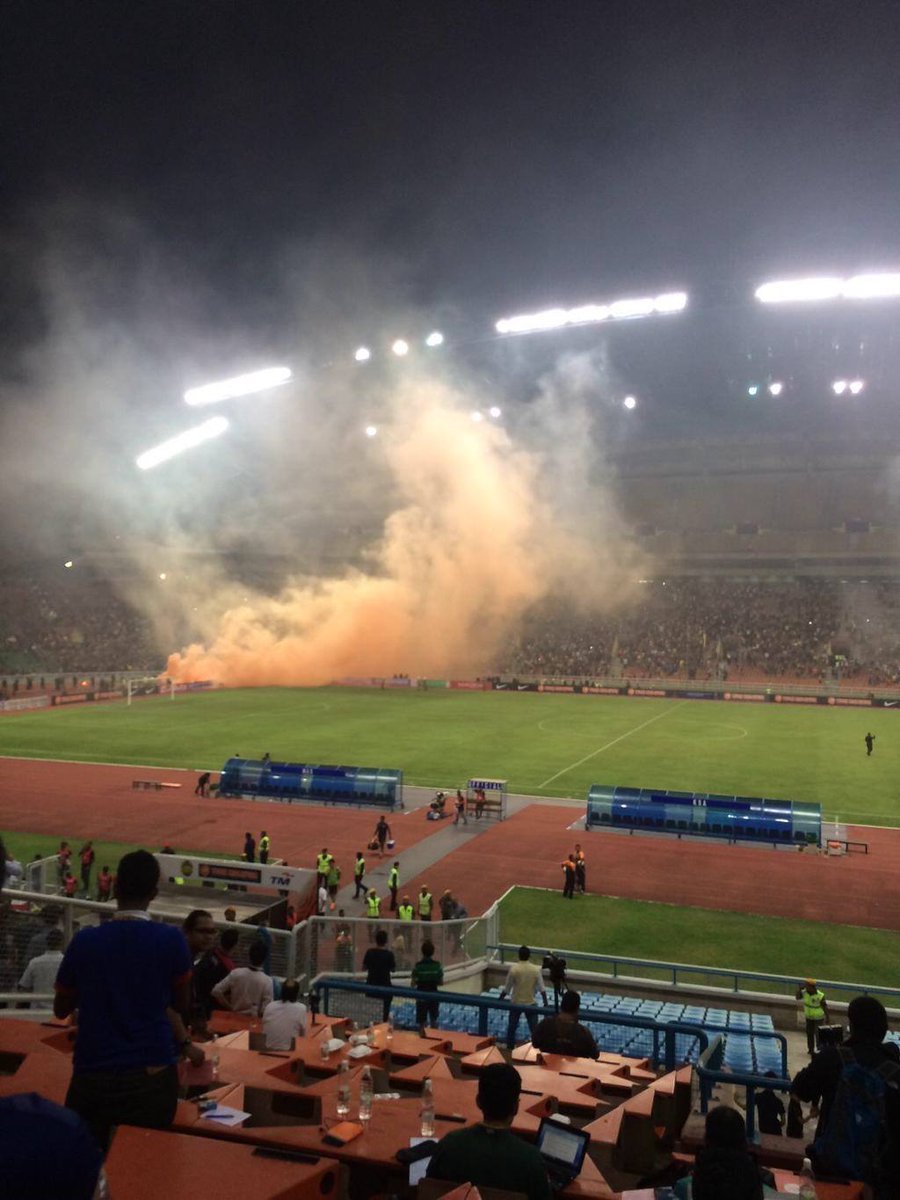 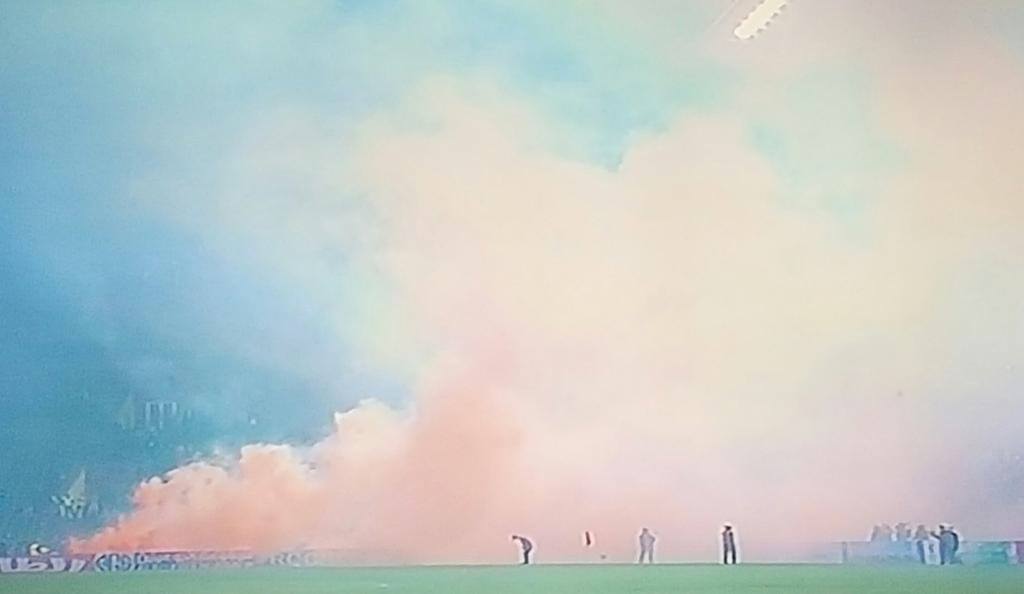