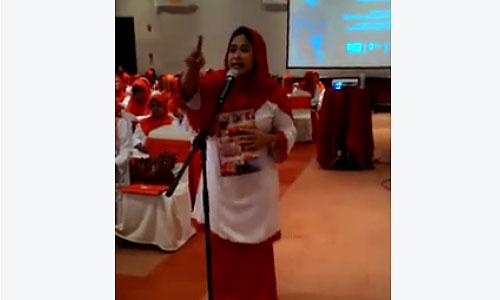 is she saying ppbm is worse than umno? –> Anina Saadudin quits PPBM https://t.co/m28UMDst74 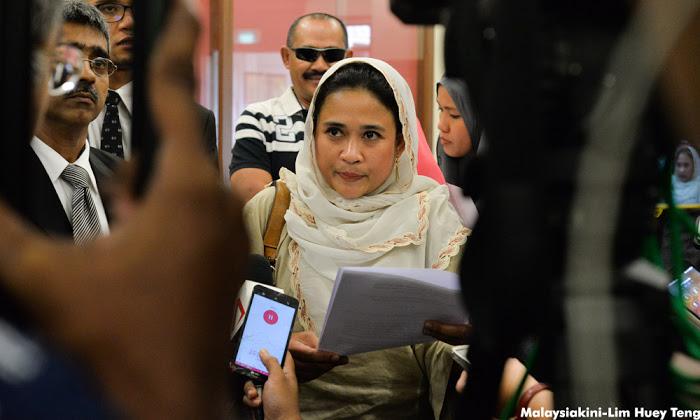 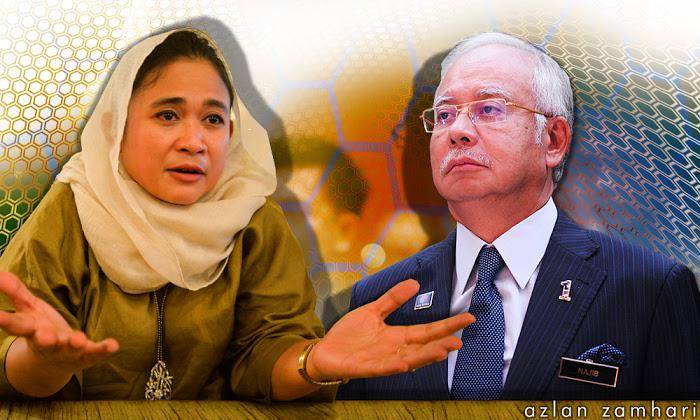 Contacted by Malaysiakini today, lawyer Mohd Hafarizam Harun confirmed that the application had been filed but refused to divulge further details.

It is understood the application was filed with the Kuala Lumpur High Court through the legal firm Hafarizam Wan Aisha and Mubarak yesterday.

Umno president Najib Abdul Razak and party executive secretary Abdul Rauf Yusoh have been asked to file their defence on a suit filed by Langkawi Umno member Anina Saadudin by Oct 1 by the High Court in Kuala Lumpur.

It’s on the RM2.5 billion allegedly deposited in his personal accounts for the benefit of the party.

At the same time, Najib and Abdul Rauf have also been asked by the court to file their affidavits in reply on Oct 6 to Anina’s applications of having the mareva injunction to freeze Najib’s assets, and a judgment of admission on the Umno president, which was filed on Friday.

The court has also fixed the next case on Oct 26 before Judicial Commissioner Mohd Zaki Abdul Wahab.

Umno terminated Anina’s membership after she filed a lawsuit against Najib and the party over the US$700 million (RM2.6 billion) deposited into the PM’s bank account, but she is challenging the sacking.

“The freezing of the assets will be until the disposal of this suit,” he said.

Anina, in a Facebook posting said the assets include Najib’s house on Jalan Langgak Duta, Kuala Lumpur and the balance US$650 million of the donation in dispute.

Besides this, Anina is also seeking that Najib declare the shares he owns, and also for the PM to within 10 days of the court order make a sworn affidavit listing his assets locally and also abroad, either which he individually owns or on a joint ownership. 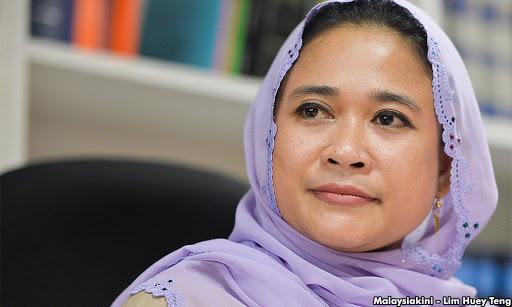 Prime Minister Najib Abdul Razak has no reason to fear Umno members because they are not his “wife”, said former Langkawi Wanita Umno member Anina Saadudin.

“Instead they are regular Umno members who you are leading,” she added in a Facebook posting tonight

She said this while admonishing Najib for allegedly using the back door to enter the Umno headquarters for the party supreme council meeting this afternoon.

“It is as though he is in fear. […] It is just like when he ran away from the Nothing2Hide forum.

“How can an Umno president be afraid of facing Umno members waiting for their leader at the front door?” she asked.

In comparison, she said former premier Dr Mahathir Mohamad dared to face an angry mob who threw bottles at him after he sacked Anwar Ibrahim in 1998.

“I believe this to be a dignified act by Mahathir who was brave because he was right […] People are only afraid when they are scared,” she added.

Dr M’s support letter for me is for all M’sians too: Anina

Dr M’s support letter for me is for all M’sians too: Anina http://twib.in/l/9jj8KMLG7od  | https://twibble.io 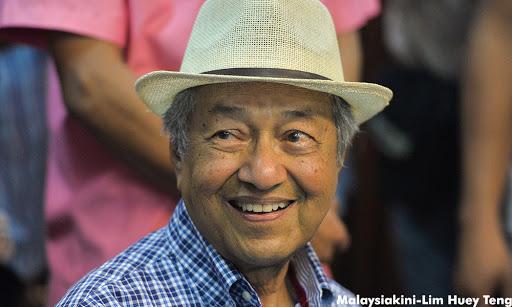 Langkawi Umno member Anina Saadudin says she was very touched to have received a letter of support from former premier Dr Mahathir Mohamad in her legal battle against the prime minister.

“I was very touched to receive a letter from Tun. I didn’t think someone who developed the country and mooted its tallest building would write to me and share my sadness in being sacked by the party,” she told Malaysiakini.

She also said that in her opinion the letter which she received yesterday wasn’t just for her alone.

“I think this letter of appreciation from Mahathir is not just to me but for all Malaysians fighting in whatever way the can to ask Prime Minister Najib Abdul Razak to step down.

“Malaysians must realise that Mahathir is with all the 28 million Malaysians. We are not alone. 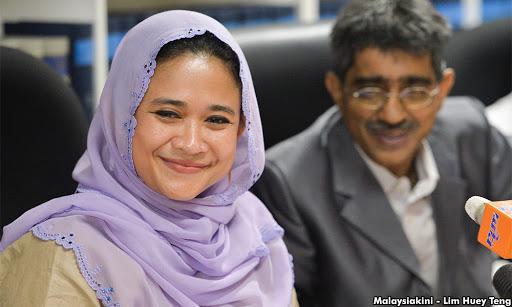 PETALING JAYA: Anina Saadudin (pic), the Langkawi Umno member who filed a suit against Datuk Seri Najib Tun Razak over the USD700mil donation in his account, has questioned her sacking from the party.

Anina said Umno secretary-general Datuk Seri Tengku Adnan Tengku Mansor had no right to sack her from the party, citing flaws in the termination letters she received.

She said it was wrong for the party to distribute copies of the letters, dated Sept 1 and Sept 2 to the media, which she claimed she had yet to receive.

“My address was also spelt wrongly,” she read a press statement to reporters at her lawyer’s office in Kota Damansara here, Thursday.
…
Following this, Umno sacked her from the party on Tuesday, with Tengku Adnan saying that her membership was automatically terminated because she took party matters to court.

“Failure to do so, I have the right to take legal action against him for breaching party rules and failing to protect Umno assets,” she said, adding that a letter of demand had also been sent to Tengku Adnan.

Anina said it was a form of misconduct on behalf of the party to allow the letters to be made public.

“Besides, how could they conclude that I lost my membership with immediate effect when the letters had two different dates?” she said.

Anina Saadudin, who filed a legal suit against Prime Minister Najib Abdul Razak over the RM2.6 billion donation issue, has been sacked from Umno.

Umno executive secretary Abdul Rauf Yusoh confirmed with Malaysiakini that she has been expelled effective today.

He said this is because Anina took party matters to court, which under the Umno constitution, is an offence that can warrant termination.
…

A letter signed by party secretary-general, Tengku Adnan Tengku Mansor, informing her of her expulsion, and sighted by Malaysiakini, was allegedly sent to her.

However, surprisingly, the letter was dated Sept 2 and not today.

Umno lawyer: Anina will be kicked out of party for suit

Umno lawyer: Anina will be kicked out of party for suit http://twib.in/l/oK4ExX8dypz  | https://twibble.io 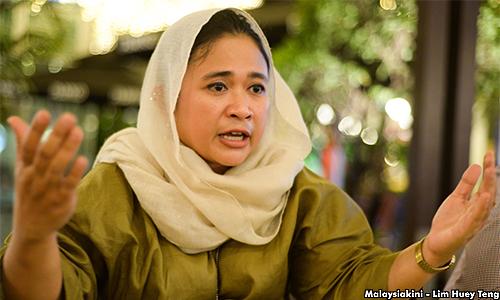 This, he said, is due to Clause 20.7 of the Umno constitution which states that any party member who brings party affairs to the court will immediately lose their membership. 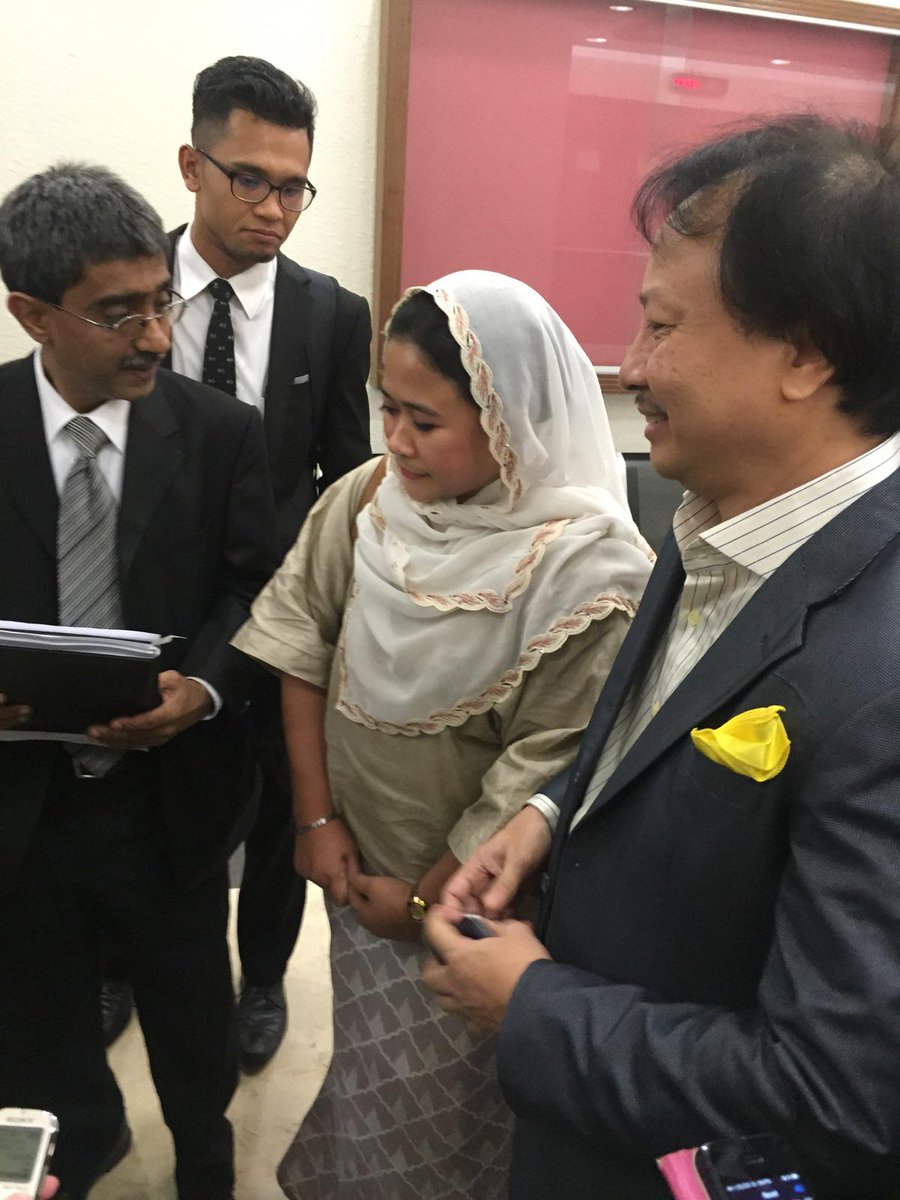 Anina Saadudin from the Padang Matsirat branch in the northern state of Kedah was seeking the repayment of the remaining US$650 million that was allegedly deposited into the Prime Minister’s accounts in August 2013 and later transferred back to an account in Singapore.
…

In filing her suit, Ms Anina claimed that the sum of money did not appear in Umno’s audited accounts in either 2013 or 2014, which the complainant said was a breach of Umno’s constitution and the Societies Act 1966.

She said that her legal action was for the benefit of the party, and had also sought an injunction to prevent being removed or suspended from office as a result.

Umno, through one of its grassroots leaders, named Najib and Umno executive secretary Abdul Rauf Yusof as defendants in the suit filed at the Kuala Lumpur High Court registry this morning. 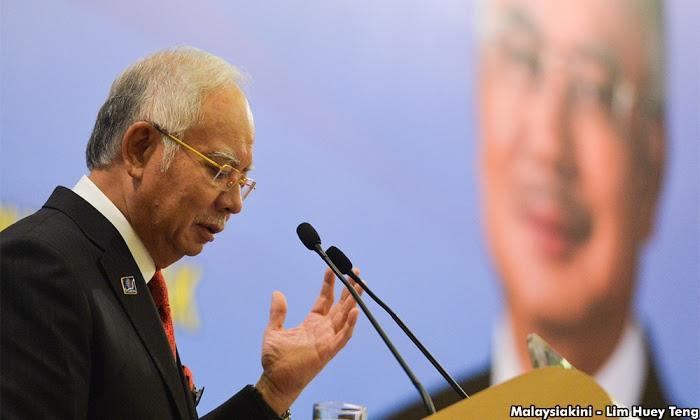 EXCLUSIVE Things are heating up in Umno, as ruling party files a suit against its president Najib Abdul Razak to reclaim a portion of the RM2.6 billion alleged party donations said to have left the country.

A large portion of the funds, which The Wall Street Journal had exposed was deposited into Najib’s personal accounts, were allegedly transferred to Singapore two years ago.

Umno, through one of its grassroots leaders, named Najib and Umno executive secretary Abdul Rauf Yusof as defendants in the suit filed at the Kuala Lumpur High Court registry this morning.

The vocal member claimed that the legal action is for the benefit of and on behalf of the party and its members.

The US$650 million is said to be the balance from the original US$681 million (RM2.6 billion) the prime minister had received in his personal accounts.

The transfer happened sometime on Aug 30, 2013, the same day Najib closed the account, as alleged by whistleblower website Sarawak Report.

It is understood that the suit was filed today after no action had allegedly been taken on complaints made against Najib to the party’s disciplinary board.

The Umno member is seeking an injunction against Najib and Abdul Rauf or their agents in the disciplinary board, state liaison body, divisions, and branches to be restrained from removing, suspending, and taking disciplinary action on her, pending the disposal of this action.

The complainant is also seeking a repayment amounting to US$650 million – the amount reportedly deposited by Najib to a Singapore bank – and an account of all monies that he had received in the form of donations.

Also sought are details of all monies in the AmPrivate Banking Account No 2112022009694 allegedly belonging to Najib, along with damages, costs, and other reliefs.

The suit alleges party president breached duties as trustee and defrauded members by failing to disclose receipt of donated funds and account for its use.

Taken out by a party member in the name of Umno, the suit alleges that because “wrongdoer” Najib is in control of Umno, the political party was itself not in a position to commence the action against him.
…

The statement of claim goes further to allege that Najib had breached the Umno constitution, the Societies Act, 1966 and his duties as trustee by:

The suit was filed by the law firm of Messrs Haniff Khatri.