The next Police Crackdown may be on Vigils…

BE WARNED! The police have had enough of vigils.

Gobind (centre) said that he had spoken to the police to fix a time next week for the remaining three to give their statements. – File picKUALA LUMPUR, June 7 — The police are investigating five Pakatan Rakyat (PR) leaders for joining a candlelight vigil on May 22, DAP’s Gobind Singh Deo has said.

When contacted by The Malaysian Insider today, Gobind confirmed that he and four others – DAP’s Dr Tan Seng Giaw, Ng Suee Lim, Ronnie Liu and PAS vice-president Salahuddin Ayub – have been called up by the police.

“The police have asked five opposition leaders to come forward for questioning over their attendance at a candlelight vigil held at entrance of Jinjang police station in show of solidarity and support for Adam Adli,” he said, referring to student activist Adam Adli Abdul Halim who was then detained at Jinjang before being charged with sedition the following day.

“We are being investigated under Section 143 under the Penal Code which is an offence for unlawful assembly and as of now, Dr Tan has given his statement. Salahuddin is the first to give his statement today,” he said, later adding that he was told that the police had recorded Tan’s statement earlier this week.

Less than a year after Malaysia’s Prime Minister Najib Razak announced that he would repeal the country’s Sedition Act — a law that curbs free speech — the state is using it to arrest and charge members and supporters of the opposition.

Still, this is doing little to deter activists, opposition supporters and citizens who continue to turn up in droves to protest against electoral fraud. Nine rallies — part of a series known as Blackout 505 — have already been organized, the last one having gone ahead on May 25 despite a government clampdown.

Malaysia’s political activists have been out in full force since the general election in early May. Amidst accusations of gerrymandering, the incumbent coalition Barisan Nasional held on to power despite having lost the popular vote. The result disappointed many who had hoped that this election would finally bring a change in government after 58 years of Barisan Nasional rule. Demonstrations erupted across the country as Malaysians protested over reports of electoral fraud and irregularities.
…..

The use of the Sedition Act against Adam angered Malaysians, some of whom began to gather nightly outside the Jinjang Remand Center to hold candlelight vigils calling for his release. The day before Adam was due to be charged in court, the police moved in and arrested 18 people.

“We were given 10 minutes to finish our speeches and leave. However, as I recall, the police didn’t seem to keep their word and came after us before the 10 minutes,” said Adrian Wong, who was at the vigil that night. “The police shouted and caught people who refused to leave or were leaving slowly.”

Activist Peter Chong was one of those arrested. “The people were pushed away from the main gate of the detention center,” he said. “I was arrested about 30 minutes after the crowd had been dispersed. I stood in front of a restaurant and tried to stop a team of seven to eight officers from entering the premises to detain people.” According to Chong, one of the others arrested was a 15-year-old girl.

Such action has been widely seen as a move by the government to clamp down on opposition after the controversy of the election, but protesters aren’t backing down. The ninth Blackout 505 rally went ahead on May 26, with tens of thousands in attendance.
……

“Such harassment will not deter us from continuing the struggle, in fact more people will come out to support,” he said. “Blackout 505 will continue to mobilize the people for peacefully gatherings. For the next two months, we will organize a few more rallies around the country, including [in] Perlis, Kedah, Kelantan, Johor, Sabah and Sarawak.”

But rallies aren’t the only course of action. “We shall continue to put pressure whenever we can, through a variety of channels. We are also filing a few legal suits, although we won’t put much trust in our legal system,” he added. “I believe that the Najib government is rather weak and vulnerable. He cannot withstand both internal and external pressure for too long. Some sort of concession will have to be given.”

They demanded for the restoration of the police’s reputation and the resignation of Zahid, who took office on May 16.

A group of some 30 students took to the Home Ministry to demand the resignation of its minister, Ahmad Zahid Hamidi, following a string of arrests of politicians and activists which they say is politically motivated.

Converging on the ministry’s main gate in Putrajaya under the scorching sun, the students took turns to make their case against the newly-minted home minister (left).

“We are called to make a stand following the arrests, beginning with Adam Adli (Abdul Halim).

“Even though there is a new Home minister, the Home Ministry continues to be partisan and as long as this continues, the police will not be independent,” said Pro-Mahasiswa representative Abdul Muqit Muhammad.

However, the star at the protest was Solidariti Mahasiswa Malaysia chief Mohammad Safwan Anang, who was released on bail today after being charged under the Sedition Act 1948 on Wednesday.

“The arrests are politically motivated as only selected people are prosecuted, it tarnishes the professionalism of the Home Ministry and the police force.

“Zahid must resign if he cannot solve this problem. He has abused his power by having the police to engage selective prosecution,” Safwan said.
…….

Safwan (seated) had refused to be released as a sign of protest against the Barisan Nasional administration. — File pic

KUALA LUMPUR, May 31 ― Student activist Muhammad Safwan Anang, who had refused bail on Wednesday after being charged with sedition, was today released from the Sungai Buloh prison after his family paid a RM5,000 surety.

Safwan’s lawyer Ariff Azami Hussein confirmed the procedure to release him was carried out at the Kuala Lumpur High Court today.

“Yes, Safwan was released this morning; his wife and his family paid the bail… he is now on his way home,” Ariff said when contacted by The Malaysian Insider

The rally group was impressed with Safwan, with many praising him for refusing to post bail and choosing to remain in prison as he felt he did not commit any crime and wanted to show that he was serious in his struggle for justice.

Many said, “We will no longer fear as Safwan had no fear. We are all Safwan Anang.”

A group of 50 people from various backgrounds held a peaceful rally, undisturbed, at the Bukit Tengah roundabout last night to express their admiration and support for Solidariti Mahasiswa Malaysia president Safwan Anang.

Safwan, 24, (left) refused to post bail when arrested on May 28, and is currently incarcerated at the Sungai Buluh prison.

However, his Twitter account at 11.40pm yesterday stated that Safwan, whose family visited him, may agree to be bailed after all, today

The 45-minute event, which begun at 8.30pm, was supposed to have been a sit-down protest but as the venue was found to be unsuitable, a stand-up rally was held instead, with participants holding up placards and banners to condemn Safwan’s arrest.

Representatives from DAP, PKR, PAS, and Parti Sosialis Malaysia were also there along with the organiser, Penang Suaram, student activists and members of Mothers for Bersih (clean and fair elections).

Police cars appeared to observe the event but did not take any action although Central Seberang Prai district OCPD Asst Comm Azman Abd Lah had labelled the event “illegal”.

The emcee for the event, Khairul Ishak, told reporters later that the police put an end to the event at about 9.30pm, by asking them to disperse.

“We were told that the event was causing a bit of a traffic jam, so we halted it as we started well and wanted to end the night properly, too,” said the assistant to Padang Lalang assemblyperson Chong Eng.

There have been vigils for Adam Adli all over the country. Vigils may be held as PKR vice-president Tian Chua, Anything But Umno (ABU) chief Haris Ibrahim, and Tamrin Ghafar were arrested today.

Chua Siaw Ping, 39 and Teh Chia Lung, 31, filed the reports at the Dang Wangi police station this afternoon.

Teh got hit on his lips while Chua complained that the police had grabbed her by her hair.

They were accompanied by lawyer G Manivannan (right in photo) who is also PKR Kapar MP.

The duo were part of the 18 police arrested on Wednesday night. Besides them, another participant also filed a similar report while a third is expected to do so tomorrow.

They had joined the vigil to show support for Adam Adli who had been remanded for five days and charged with sedition at the Kuala Lumpur Sessions Court yesterday.

Manivannan, when contacted by Malaysiakini, urged Bukit Aman to investigate the allegations made by the two within seven days.

He said one of them had clearly seen the policeman who had hit him and is prepared to finger the culprit at an identification parade.

Showing support: A crowd at a candlelight vigil outside the Jinjang police station in Kuala Lumpur where Tian Chua, Tamrin Ghafar and Haris are being held after being arrested. 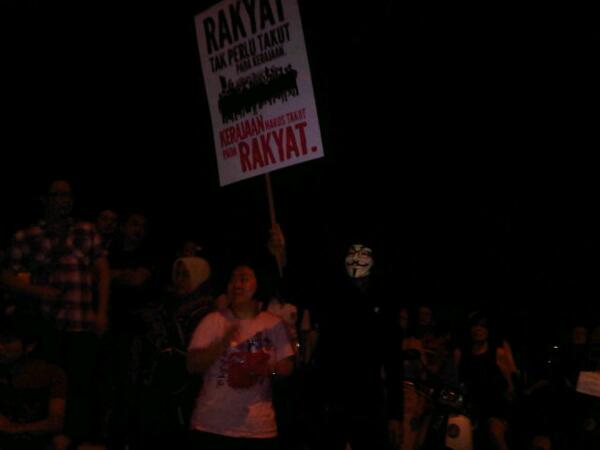 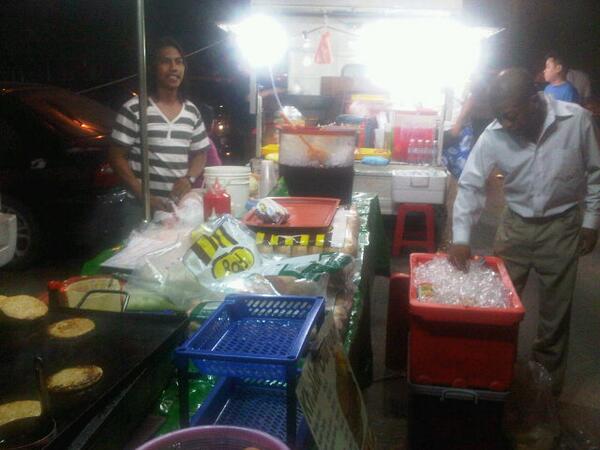 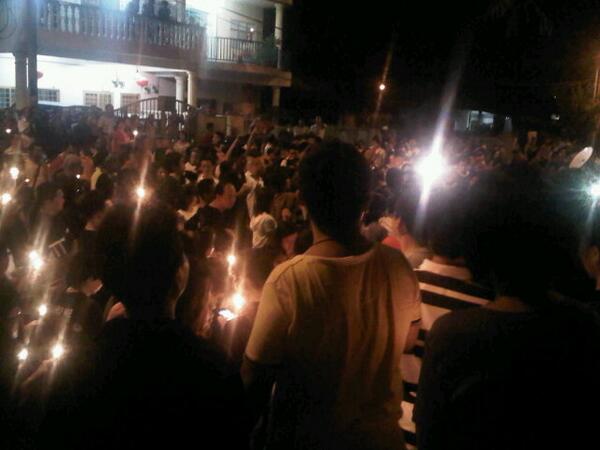 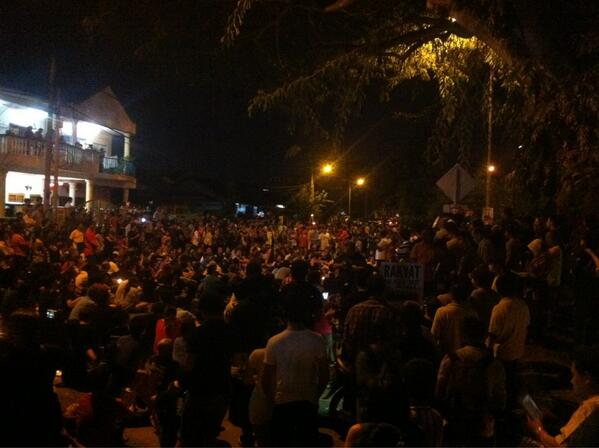 Bolehland Online 资讯网
Like This Page · about an hour ago

Ma’am you are under arrest, for “Lighting Up The Candles” near the police lockup in Malaysia

KUALA LUMPUR, May 23 — The police have released 18 protestors, including four women, who were arrested for allegedly refusing to disperse at a gathering in front of the Jinjang police station near here last night.

Kuala Lumpur police chief Datuk Mohmad Salleh said they were released on police bail after their statements were taken.

The protestors aged between 22 and 54 allegedly gathered outside the police station to demand the release of student activist Adam Adli Abdul Halim.

Politically-motivated candlelight vigils have reached a level where the police could no longer tolerate, said Kuala Lumpur CPO Mohmad Salleh, who urged people to voice their grievances through legal channels instead.

Stressing that such gatherings are illegal, Mohmad (right) said it would not solve any problems, but instead brings about an “unhealthy atmosphere”.

“These vigils are an offence under the law. For the police, it has reached a level where we can no longer tolerate such things, because it can cause anxiety for the local residents.

3 Responses to The next Police Crackdown may be on Vigils…