More than 30,000 people attended a ‘Blackout 505’ rally organised by Pakatan Rakyat in Kedah last night, the seventh in the series nationwide to date.

They expressed solidarity for student activist Adam Adli Abdul Halim, who has been remanded by police, as well as bashed statements by Ahmad Zahid Hamidi since he became home minister last Wednesday.

On cue, the participants – who had gathered in front of the PAS headquarters in Kota Sarang Semut – turned on lighters as sign of support for Adam Adli.

The Sultan Idris University of Education undergraduate is being held for questioning under the Sedition Act and Penal Code, for a speech he allegedly made at a post-election forum on May 13.

Banners bearing the words ‘Free Adam Adli’ was unfurled during the rally to call for his immediate release.

“We should rise and defend our nation. They (the authorities have) arrested Adam Adli who was alleged to say that he wants to topple the government. In fact he called on the people to defend the legitimate government, accept democracy and not fraud,” said Anwar.

“Their action is (meant) to intimidate other people. This is the rise of the young people, we must help to make it happen.” 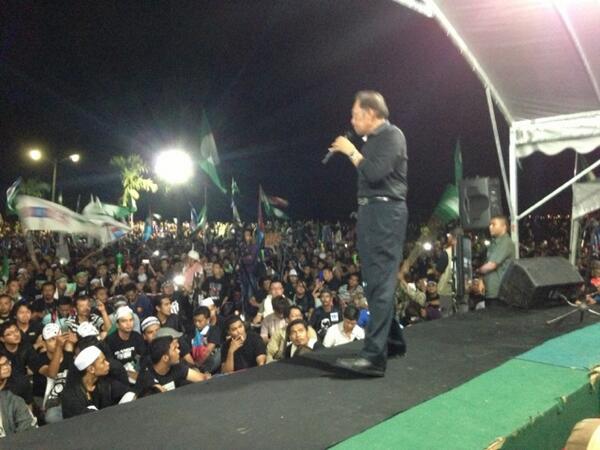 With all the warnings from Prime Minister Najib Razak’s Umno party of a “Chinese tsunami” threatening the birth rights of the Malays, who would have thought that Kota Sarang Semut, a typical small town in the Malay heartland, would jump both feet into the Black 505 craze sweeping the country.

At 6.30pm, the PAS headquarters here was already a hive of activity. A traffic jam was already building up and you could only find parking a kilometre away. Meanwhile, despite the late evening heat, the townsfolk were cheerfully walking into the large compound of the PAS building. Many wore black in solidarity with the Black 505 movement, begun by Opposition Leader Anwar Ibrahim to protest electoral fraud in Malaysia’s May 5 general election.

Refusing to concede defeat, Anwar has accused Najib’s government of rampant vote-rigging and cheating to “steal” victory from his Pakatan Rakyat coalition. He called for a show of support from the people two days after the election and a crowd of some 150,000 turned up at the Kelana Jaya stadium in Selangor. The rest as they say is history.

Galvanized by the open support from the people, particularly young Malaysians in their 20s and 30s, urging him to fight on for a review and re-election in some 30 seats which suffered the worst fraud, Anwar and PR took their case to Batu Kawan, Ipoh, Kuantan, Johor and Seremban, where they spoke to ‘sell-out’ crowds who gave them heroes’ welcome.

“We have made all the arrangements for the traffic flow and taken precautions for public safety – all three parties (PAS, PKR and DAP). In the past 6 programes we held, there has not been any trouble. This shows our gatherings are peaceful and the people who attend understand this. We hope Datuk Zahid Hamidi and the police will also understand this noble effort of ours to strengthen the voice of democracy in our country,” Mahfuz, who is also the Pokok Sena MP and PAS vice president, told Malaysia Chronicle.

Indeed, a check around showed a crowd that – compared to its urban counterparts in Kelana Jaya, Ipoh and Johor – was slightly more shy but no less eager to take part in Black 505 to vent their outrage at the Umno-BN’s alleged electoral fraud.

All eyes on Black 505 rally in Alor Setar tonight

ALOR SETAR: Malaysians are waiting anxiously to find out what will happen tonight when Pakatan Rakyat leaders Datuk Seri Anwar Ibrahim, Mohamad Sabu and Lim Guan Eng turn up for the Black 505 rally here tonight when Kedah Menteri Besar Datuk Mukhriz has said he will not allow it to be held.

Yesterday, Home Minister Datuk Seri Dr Ahmad Zahid Hamidi said the government will not be issuing warnings anymore but will act tough against individuals whose extreme actions would only disrupt public order.

Tonight’s rally venue has changed and it will now be held at Kompleks PAS Kedah, Kota Sarang Semut, here.

Chairman of the rally Datuk Johari Abdul and other PAS leaders like Datuk Mahfuz Omar and Datuk Saifuddin Nasution will also be attending.

According to Mahfuz, tonight’s programme will begin with Maghrib prayers and then ‘solat hajat’ (special prayers) for peace and the wellbeing of the nation especially community ties.

“We will also pray for the speedy recovery of former Kedah Menteri Besar Ustaz Azizan Razak who is still recovering in the Penang hospital,” said the PAS vice president, Harakah Daily online reported.

After the prayers, at about 9pm, all the State Assemblymen and Members of Parliament in Kedah will address the crowd before the Pakatan Rakyat leaders go on stage. 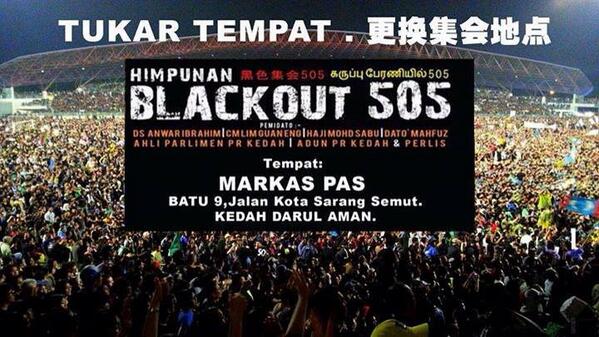 “Mukhriz says no to organiser of Pakatan rally” @tm_insider http://www.themalaysianinsider.com/malaysia/article/mukhriz-says-no-to-organiser-of-pakatan-rally/ … – Sheer arrogance of power from a PERKASA sympathiser

—–
In the 1990s, Zahid was a staunch supporter of Malaysia’s reform icon Anwar Ibrahim and had protested against the latter’s jailing on trumped-up sodomy and corruption charges in 1998. But Zahid recanted and cut all ties with Anwar after former premier Mahathir Mohamad threw him into jail under the Insternal Security Act. He was released in 1999 after he reversed his stance and declared loyalty to the Umno leadership controlled by Mahathir.
Malaysia Chronicle
Monday, 20 May 2013 13:25

Not everyone is as cowardly as you, Rafizi slams Zahid: Kedah rally is on, Mukhriz or not

PKR strategy director Rafizi Ramli ridiculed his rivals in Umno for cowardice and being out of touch with the people over a spate of rallies that have taken the nation by storm.

“Intimidation and fear tactics don’t work anymore. They only worked on Zahid Hamidi in 1998,” mocked Rafizi, who is also the newly-elected MP for Pandan.

“I would suggest that Zahid does not interefere in the job of the police. Let the police do their work professionally. We don’t need another home Minister who makes silly comments.”

He was referring to Umno vice president Zahid hamidi, who taking over as Home Minister from Hishammddin Hussein last week had promptly warned the Opposition and rally-goers that action would soon be taken against them.

In the 1990s, Zahid was a staunch supporter of Malaysia’s reform icon Anwar Ibrahim and had protested against the latter’s jailing on trumped-up sodomy and corruption charges in 1998. But Zahid recanted and cut all ties with Anwar after former premier Mahathir Mohamad threw him into jail under the Internal Security Act. He was released in 1999 after he reversed his stance and declared loyalty to the Umno leadership controlled by Mahathir.
……….

He added that the Blackout 505 rally in Kedah would proceed and a new venue to be announced on the social media network soon.

“Another 40 to 50,000 people will still come, even if it has to be held in Mahfuz Omar’s house in Pokok Sena,” said Rafizi, referring to the Kedah PAS commissioner, who will be helping to organize the event.

Mukhriz says no to organiser of Pakatan rally

ALOR SETAR, May 18 – Kedah Menteri Besar Datuk Mukhriz Tun Dr Mahathir said he would not allow Pakatan Rakyat to hold a rally at the Sultan Abdul Halim Stadium in Suka Menanti on Tuesday for it (rally) was not a wise thing to do.Mukhriz said although he felt that any group was entitle to hold an assembly, but its purpose should be scrutinised first before approval could be granted.

“Similar rallies held in several places around the country were intended to instil hatred among the participants against Barisan Nasional (BN) which had been given the mandate to run the federal and Kedah governments. This is not acceptable.

“If they just want to assemble, there is no problem. But the rally will be marked by hate speeches punctuated by unfounded allegations and slanders,” he told reporters after hosting a thanksgiving reception at Seri Mentaloon, the menteri besar’s official residence here today.