A tradition of VIOLENCE in Malaysia: From Jamal Yunos & his Red Shirts to Tajuddin’s son to anti-Zunar UMNO Youth hoodlums to Lokman and Papagomo…

Students roughed up by Najib supporters for demanding ‘where’s the RM2.6b?’ https://t.co/4qlAYAYg6R

I was headlocked, says Syed Saddiq; it was just a hug, says Papagomo

SEMENYIH: Despite a fast and smooth nomination process, a couple of unfortunate incidents marred an otherwise cordial atmosphere at the Semenyih nomination centre.

Shortly after the four candidates of the Semenyih by-election were announced, Parti Pribumi Bersatu Malaysia (Bersatu) Youth chief Syed Saddiq Syed Abdul Rahman claimed he was nearly attacked by Barisan Nasional supporters as he left the nomination centre at around 11.05am today (Feb 16).

He alleged that Umno Youth exco member Wan Muhammad Azri Wan Deris, better known as Papagomo, cornered him from a different route and put him in a headlock.

“I was walking to my car, along with three others, when the incident occurred.

“At first, the Barisan supporters simply jeered at me, so I did not heed what they said and continued walking,” Syed Saddiq said.

The Youth and Sports Minister said nearby policemen managed to stop the situation from turning even more serious during his encounter with Papagomo.

Syed Saddiq said no political party should resort to violence.

The Muar MP said he would now leave the matter to the police and also go for a medical check-up.

Earlier, he posted videos of the incident on social media, expressing his disappointment with the “act of gangsterism”.

Syed Saddiq Gets Chased & Called ‘Babi’ by Angry BN Supporters at Semenyih’s By-Election Nomination
OMG! This is very scary.  Our Youth and Sports Minister, Syed Saddiq was “attacked” by an angry mob of BN (Barisan Nasional) supporters when he went for the Semenyih by-election nomination. Kini TV… 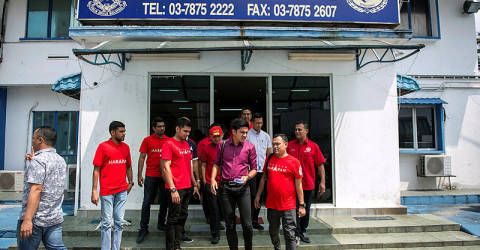 PETALING JAYA: Cartoonist Zunar has decided to call off his exhibition scheduled to be held in George Town tomorrow and featuring political caricatures based on current issues in the country, saying it was due to likely disturbance planned by troublemakers.

In a statement today, the satirist whose real name is Zulkiflee Anwar Ulhaque claimed that the exhibition had to be cancelled after it was learnt that Penang Umno Youth was distributing posters to get members to “visit” the site of the display at Beach Street tomorrow morning.

“Last year’s experience tells me this is not going to be a normal visit, but more an act of physical intimidation,” he said.

“Umno Youth under (its chief) Khairy Jamaluddin has on many occasions become very rowdy and aggressive, as seen at my exhibition in Komtar last November.

“So, I have no choice but to call off the exhibition due to security reasons,” he added.

“Nevertheless, this will not stop me from disseminating messages of anti-corruption through my cartoons,” Zunar said.

KK and 1 other Retweeted

FYI Zunar‘s remand allowed one day. IO asked asked for 4 days. He will be released this evening. @zunarkartunis #BebasZunar #TangkapGangster

Zunar arrested under Sedition Act: So with Jamal and his RedShirts be arrested for sedition @lawyers4liberty @gst183

Zunar said the leader of the group introduced themselves as Umno Youth members. They were led by Penang Umno youth chief Rafizal Abdul Rahim.

Four punches were hurled at him when he was attacked by a group of Umno members in Komtar yesterday, said political cartoonist Zulkiflee Anwar Ulhaque (Zunar).

“They also pulled my collar, I was physically assaulted, but I kept calm, I did not want to retaliate,” Zunar told Malaysiakini.

“As an award recipient of the Cartoonist for Peace Award presented by former United Nations secretary-general Kofi Anan in Geneva this year, I want peace, not war,” he added.

“I am sure the national Umno leadership is embarrassed by its Penang Youth members’ uncivilised antics, behaving like thugs.

“Zunar’s artworks are based on what Malaysians feel, giving a funny take on scandals by the ruling elite through cartoons.

“If that scares Penang Umno members, then it means Umno’s end is near,” Malik said in a statement.

Some 50 Penang Umno Youth members stormed the exhibition on the third floor, just outside the state government at about 2.30pm.

They demanded to see Zunar, whose real name is Zulkiflee Anwar Haque, to vent their disapproval on the suggestive artworks featuring caricatures of Prime Minister Datuk Seri Najib Razak, which they labelled as seditious.

The situation turned ugly when Zunar refused to see them. Tension escalated at the scene, so much so that the Federal Reserve Unit (FRU) had to be called in to control the mob.

The cartoonist finally relented after about an hour as the wing members stood their ground.

Meeting the members at about 4pm, Zunar faced the angry pack under strong police presence before ordering his staff to cancel the display.

Some 20 pieces of caricatures were taken down for the sake of security as instructed by the police.

Cops save cartoonist Zunar from angry crowd https://shar.es/18bE86  via @sharethis

About 30 people disrupted an exhibition featuring the works of political cartoonist Zulkifli Anwar Ulhaque, better known as Zunar, at the Komtar building in Penang this afternoon.

After arriving at the venue around 3pm, the group hurled obscenities at Zunar, and demanded that he remove the cartoons which were deemed insulting to Prime Minister Najib Abdul Razak.

Though the group gave Zunar a 30-minute time frame to remove his work, they however grew impatient and began to kick the drawings, which were affixed to stands.

“They kicked down the works depicting Anwar Ibrahim. They swung boxes, threatening to throw them at us.

“They told Zunar to remove his cartoon books and threatened to burn them,” she added.

Some 30 police personnel, including members of the light strike force, were present during the incident but could not contain the group.
…

The group left at 3.45pm to lodge a police report, while Azura said she will also lodge a report because the group threatened to disrupt Zunar’s other programmes in Penang.

Umno minister Tajuddin’s son and his friends riot at Parliament! Attacks an MP!!!

Watch: Jamal Yunos the Bully. Avoid him at the Bersih 5 Rally!

Jamal Yunos and his Red Shirts harass Bersih 5 at Bangi

1 Response to A tradition of VIOLENCE in Malaysia: From Jamal Yunos & his Red Shirts to Tajuddin’s son to anti-Zunar UMNO Youth hoodlums to Lokman and Papagomo…