No, you can’t ask Najib if he is going to resign!

Razak refused to answer questions when confronted by Channel 4 News

“Are you going to reign, Prime Minister?”

Go to the Facebook Page and look for the video…

In March 2016, two journalists from the Australian Broadcasting Corpo­ration were arrested after they tried to approach Najib to ask him questions.

This is the ‘million-dollar’ question that got 2 Australian newsmen kicked out of Malaysia (Asian Correspondent) https://goo.gl/gU4VvB

Arrested Australian journalists did not breach the security cordon!

KUCHING: A team claiming to be from a news channel in Britain were sent out by security from the old State Assembly building after they tried to ask Datuk Seri Najib Tun Razak questions on allegations of corruption.

The reporter – Jonathan Miller, the Asian correspondent for Britain’s Channel 4 News – and his cameraman were seen being asked by security personnel to leave the building where the Prime Minister had just arrived to join other leaders following Barisan Nasional’s win in the state polls.

Another foreign journalist tries to waylay PM https://shar.es/1eieuJ  via @sharethis 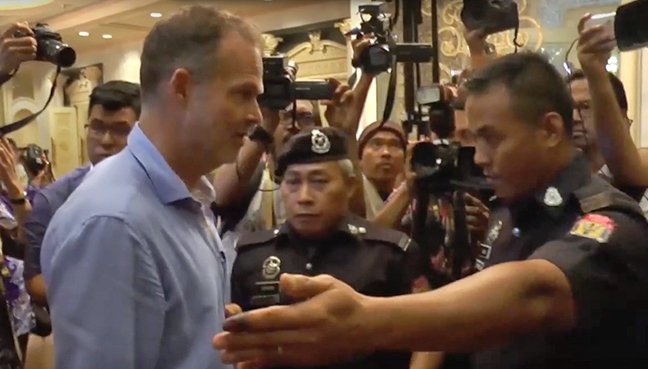