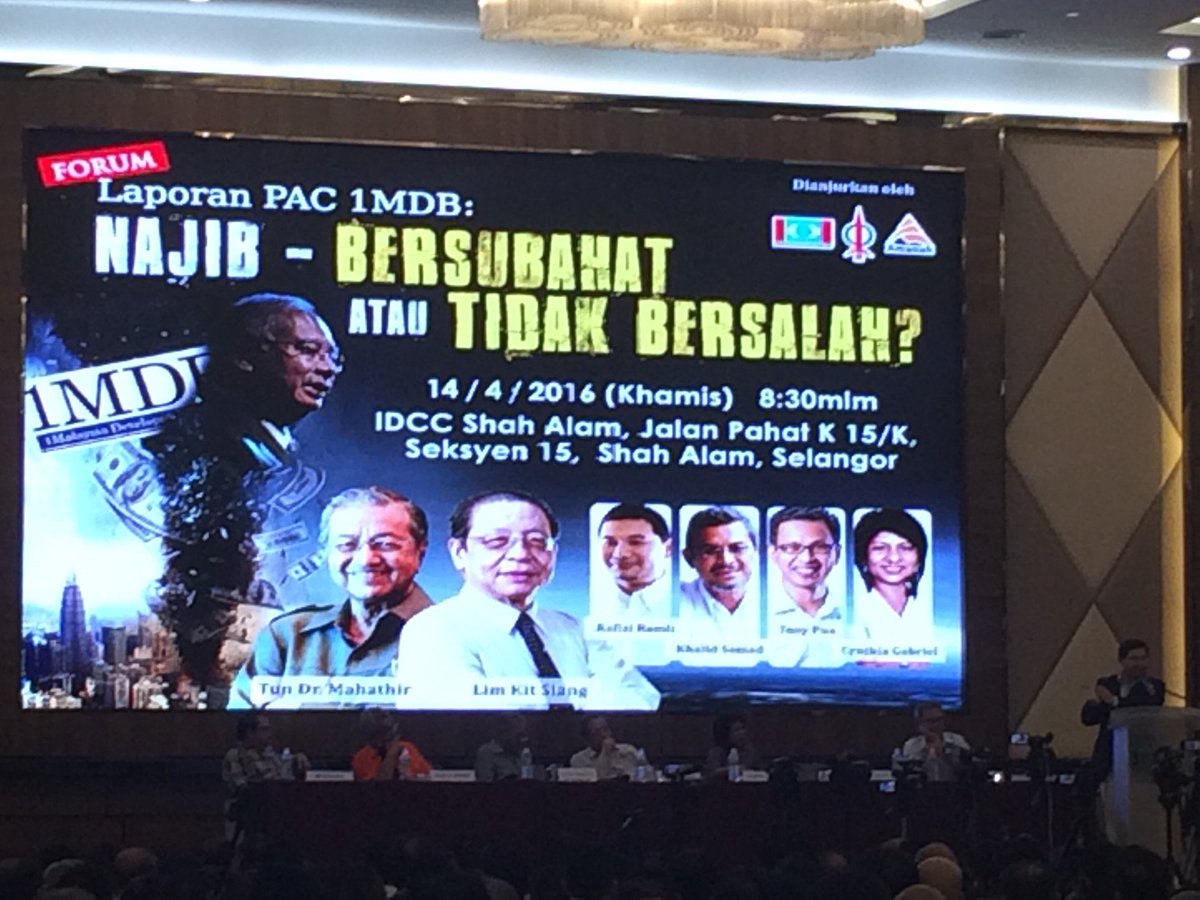 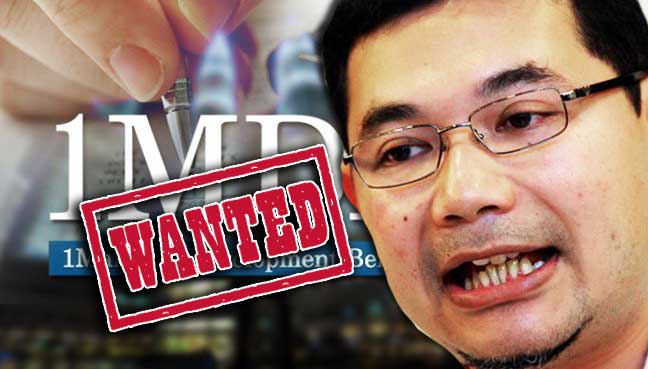 SHAH ALAM: PKR Secretary-General Rafizi Ramli has warned those he accuses of wrongdoing in connection with the 1MDB scandal that he would put them on what he calls a “citizens’ wanted list” which he would publish.

Speaking at a forum here last night, he said his warning was directed at people allegedly protecting Prime Minister Najib Razak, whom he held accountable for the alleged loss of public funds as a result of wrongdoing in 1MDB.

He named tycoon Low Taek Jho, 1MDB CEO Arul Kanda Kandasamy and Arul’s predecessor, Shahrol Azral Ibrahim Halmi, as among those he planned to go after. He also named Casey Tang, who served as 1MDB’s Executive Director for Business Development for three years until March 2011. Tang is said to be on Bank Negara Malaysia’s wanted list.

“Najib Razak feels he is invincible,” Rafizi said. “But we can touch those involved with 1MDB. So this is my direct message to some people named very clearly in the Public Accounts Committee (PAC) report: after this we are going to issue a citizens’ wanted list.

“If you can’t get the guy on top, you go after the guys protecting him. It’s our job to make sure they run until they have no more ground to run on.

“We will bring you down one by one. So you choose whether to come forward or to face possible legal action. You decide whether you want to allow Najib to make you a scapegoat, or to save your own skin.”

Speaking at a Pakatan Harapan forum in Shah Alam on the Public Accounts Committee’s 1MDB report, Mahathir said to include the demand to release Anwar would only split the movement.

“If we were to decide on Anwar and this or that, we will be split apart.

“We must unite for one goal only. In any struggle, the strategy is to reduce your enemy and increase your friends,” he told the audience of over 500 people.

“We must have rational thinking based on careful consideration. If we follow our desires, believe me, we will not succeed,” he added.

Mahathir was responding during the question-and-answer session, when someone in the audience stood up and demanded Mahathir to also make a call for Anwar’s release from his Sungai Buloh prison cell.

Mahathir’s former deputy is currently serving a five-year jail sentence for sodomy, a charge which he said was politically motivated.

The Anwar supporter also asked Mahathir to declare that what the former premier had done to Anwar in 1998 was wrong.

1 PAC FORUM REPORT VIEWER: Rafizi: OSA converted from the embargo to state secrets
Secretary, rafizi ramli politician wants to challenge the decision of the Prime Minister, datuk Seri Najib Tun Razak to classify the state audit reports as osa and chief state audit has no power to do so.

The Public Accounts Committee (PAC) should reconvene and present new findings on 1MDB based on three factors: firstly, reconsideration of PAC Report on 1MDB; secondly, the London Stock Exchange statement that British Virgin Islands-incorporated Aabar Investments PJS Limited (Aabar BVI) has no links with the Abu Dhabi-state owned International Petroleum Investment Company (IPIC) or its subsidiary Aabar Investments PJS and that neither of them have received US$3.5 billion which 1MDB had paid to Aabar BVI; and thirdly, summoning important witnesses omitted in PAC investigations.

I say reconsideration of the PAC Report on 1MDB because the host of 1MDB scams, mismanagements, dubious loans and transactions do not just demand that the 1MDB former CEO Shahrol Azral Ibrahim Halmi and others in the management should be held responsible for the first global corruption in the nation’s history, but all fingers in the PAC Report point to a final authority and decision-maker higher than Shahrol.

This is because there are four tiers of management authority in 1MDB, namely the Advisory Board, the Board of Directors and the Top Management, but over and above all these three tiers of management, is the fourth and most vital tier – the Prime Minister who by virtue of Article 117 of 1MDB Memorandum and Articles of Association (M&A) is the ultimate authority who exercised final direct control of 1MDB.

Article 117 of the 1MDB M & A requires all major decisions of the company involving financial commitment (including investment) and restructuring to have the written authorization from the Prime Minister, it is the Prime Minister who is the most important player in 1MDB, exceeding the role of the Advisory Board, the Board of Directors and the Top Management all added together.

Last June, when he was temporarily appointed the Cabinet spokesman for the 1MDB scandal, the Second Finance Minister Datuk Seri Husni Hanadzlah admitted in a TV interview on “1MDB: Di mana wangnya?” that Najib as Prime Minister is the final approving authority for all 1MDB deals, investments and transactions.

Under such circumstances, how could the PAC just blame Shahrol for the 1MDB scandal when Najib was virtually involved in the day-to-day running of the company, not only because he was Chairman of the 1MDB Advisory Board – which apparently never met – but by virtue of Article 117 of the 1MDB M & A.

One shock tactics UMNO/BN Ministers, leaders and cybertroopers like the Barisan Nasional Strategic Media Communications Director and Minister for Urban Wellbeing, Housing and Local Government, Datuk Abdul Rahman Dahlan had been hashing in the past week was in the form of the question on the social media: “U guys bodoh!! Why sign the report when u r only 80% satisfied. BODOH!”

Thinking that he could go for the jugular, Abdul Rahman Dahlan even asked why the Opposition PAC members had not submitted a “minority report” on the PAC findings on the 1MDB.

I think the five Opposition PAC Members were wise and right in not demanding to submit a “minority report” as such efforts would not only be aborted (why there has been no ‘minority report’ in Malaysian parliamentary history!), or even the PAC Report on 1MDB submitted on Thursday might not see the light of day on one ground or another, including the ridiculous “sub judice” argument.

Two important achievements of the PAC Report on 1MDB signed by the five Opposition PAC members – Deputy PAC Chairman Dr. Tan Seng Giaw (Kepong), Dato’ Kamarul Baharin Abas (Telok Kemang), William Leong (Selayang), Dato’ Takiyuddin Hassan (Kota Bahru) and Tony Pua (PJ Utara)are:
1. The swift development in a matter of four days to resolve what the PAC could not do in a year of investigation – the London Stock Exchange statement by International Petroleum Investment Company (IPIC) on Monday that neither itself nor its unit Aabar Investments PJS have any links to British Virgin Islands-incorporated firm Aabar Investments PJS Limited which was paid US$3.5 billion by 1MDB – the fastest result for any PAC Report in the nation’s 59-year parliamentary history. Now is how to pick up the pieces, with the big hole of US3.5 billion 1MDB accounts.

2. the admission by the Najib administration of the host of 1MDB scams, mismanagements, dubious loans and transactions in the past six years which until last Thursday had been dismissed as speculative and unverified allegations by irresponsible, biased or even Jewish/Zionist-inspired journalists in hostile foreign newspapers like Wall Street Journal (WSJ), New York Times, Financial Times or unreliable websites like Sarawak Report.

It is now the UMNO/BN leadership who regret and rue the tabling of the PAC Report on 1MDB although it is not fully satisfactory – but it should be the first step, not the last lap, in unveiling the intricacies and complexities of the first Malaysian global scandal with global dimensions, with global implications as there are some ten countries where one investigation or another connected to the 1MDB scandal is being carried out.

The third reason why the PAC should reconvene and reconsider its findings on 1MDB is to summon important witnesses which it had not called, including Jho Loh, the four Tan Sris on the Special Task Force on 1MDB, viz the then Attorney-General Tan Sri Gani Patail, Bank Negara Governor Tan Sri Zeti Akhtar Aziz, Malaysian Anti-Corruption Commission Chief Commissioner Tan Sri Abu Kassim Mohamad and the Inspector-General of Police Tan Sri Khalid Abu Bakar, and most important of all, the Prime Minister himself as the final authority of all 1MDB decisions by virtue of Article 117 of the 1MDB M&A.

The PAC should reconvene in emergency meeting to try to submit a revised PAC Report on 1MDB in time for presentation to Parliament when it reconvenes on May 16.

Whether the PAC submits a revised PAC report on not, Parliament should devote the first three days to debate the PAC Report on 1MDB tabled last Thursday, and I will give notice of a motion to this effect, as I will be able to return to Parliament for the May meeting following the end of my six-month suspension from Parliament.