S. Sellamah, 36, was sentenced to day’s jail and fined RM200, in default five days’ jail, for stealing a packet of Milo for her two-year-old child at a supermarket in K.L. It had happened at the KK Supermart & Superstore, Jalan Hang Lekir, Dang Wangi.

Amanah’s Hanipa says the High Court has power to strike off the criminal record.

KUALA LUMPUR: Pakatan Harapan MPs are seeking a judicial review of the recent conviction of a housewife who stole a packet of Milo from a supermarket.

Sepang MP Mohamed Hanipa Maidin of Parti Amanah Negara told a press conference outside the Dewan Rakyat today that the purpose was to get the courts to strike off the criminal record on S Sellamah, whom a magistrate convicted on March 2. She was sentenced to a day’s jail and fined RM200.

Hanipa said he, on behalf of Pakatan MPs, would write to the High Court to seek the review.

He said several sections of the Criminal Procedure Code gave the High Court the power to review the correctness of a lower court’s decision .

“We don’t want the criminal record to hound her,” he said. “In our opinion, the magistrate did not have to sentence the mother to prison or fine her.”

He said Sellamah’s punishment gave the impression that there was a double standard in the Malaysian justice system. 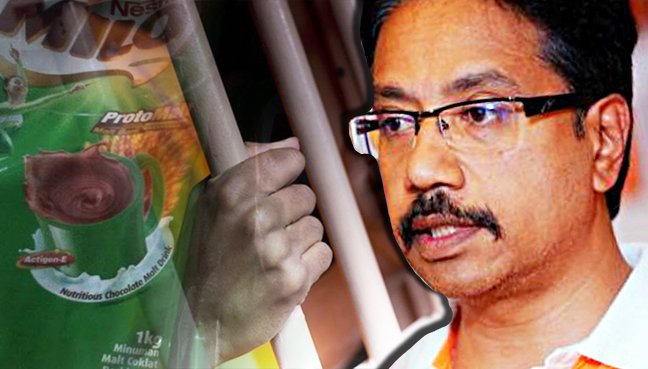 The magistrate could have released the accused if not for the judicial system in Malaysia.

KUALA LUMPUR: Hindraf Makkal Sakthi, referring to the case of a woman who was jailed a day and fined RM200 for stealing a packet of Milo from a supermarket for her two-year-old child, said that it would have sufficed if the magistrate had warned her instead and referred her to the Welfare Department for assistance.

“Instead, Madam Sellamah risked a further five days in jail by not paying the fine,” lamented Hindraf Chairman P. Waythamoorthy in a Facebook posting.

“She pleaded with Magistrate Husna Dzulkifly, ‘forgive me Madam Magistrate, I stole the Milo because my two-year-old child was nagging me for a drink’.”

“It was within the power of the Magistrate to release her. The law has to be tempered with compassion.”

Unfortunately, said Waytha in recalling previous cases, “the judicial system in Malaysia acts like a robot. They do not have any consideration for humanity.”

Waytha was commenting on an unnamed Malay lady who paid the fine in Court on Thursday for Madam Sellamah to spare her a further five days in jail and also drove to the Kajang Prison to get her released. “She wanted to personally give the release documents to the Director of Prison. I spoke to her.”

“She was told that it would take three hours to process the release documents before the accused could be freed. ‘As a mother, I could feel her pain,’ she told me.”

The Hindraf Chief learned that the Malay lady asked to be put on the phone to Madam Sellamah upon her release. “I have instructed a Hindraf activist, Mathavan, to get the details of both women for our records in following up the case.”

“The Malay lady drove to Kajang Prison when she should have been on her way to collect her son’s SPM results which were released on Thursday. She was late to go to school to collect the results.”

“What a gesture of love and humanity! This is beyond race and religion. This is an example of true Malaysians. She and her husband were together in this noble act. I told them that if only more Malaysians were like them, we would be a great nation.”

The couple, continued Waytha, was an example of a genuine act of kindness. “There was no thought of any return. This is the highest form of worship that a human being can do. May the Almighty bless her and her family.”

KUALA LUMPUR: A woman was sentenced to a day’s jail and fined RM200, in default five days’ jail, for stealing a packet of Milo for her two-year-old child at a supermarket here.

Magistrate Husna Dzulkifly handed down the sentence on S. Sellamah, 36, who pleaded guilty to the charge.

She was charged with stealing the 2kg-packet of Milo at the KK Supermart & Superstore, Jalan Hang Lekir, Dang Wangi here, at 11.19 pm last Feb 29.

“Forgive me Madam Magistrate. I stole the Milo because my two-year-old child was hankering me for the drink,” said the housewife during mitigation.