Posted on November 5, 2015 by weehingthong 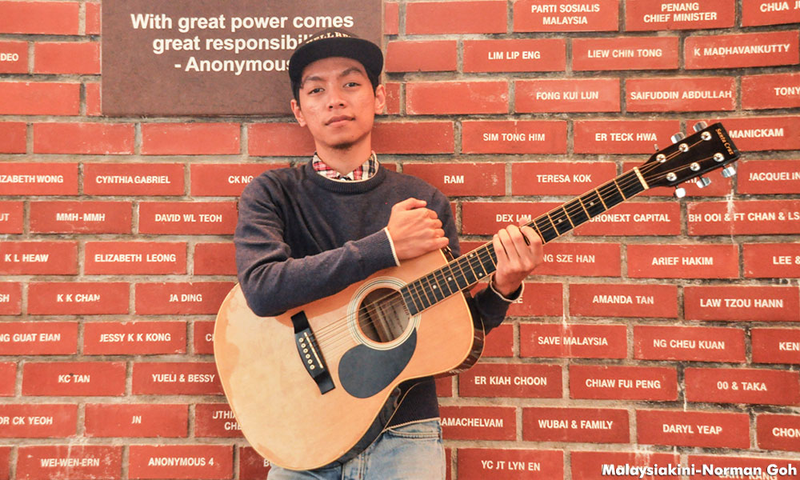 The 23-year-old, who stays in Cyberjaya, is forced to take the ERL whenever he ventures into Kuala Lumpur.

“It costs me around RM50 per return trip.

“One day, I got so stressed, and because of this I started singing about it,” he lamented to Malaysiakini in an interview Thursday.

Amirudin said it only took him 10 minutes to pen the lyrics and melody for the song last week.

The college student, who taught himself to play the guitar, said songwriting to him is like writing a diary.
…

The Kedah lad said it was obvious why he made the reference to the prime minister’s RM2.6 billion donation issue in his song, citing the current scenario in the country.

“Most people blame one another for not voicing out when they themselves do nothing. So instead of waiting for others to voice out, I wrote my own song,” he said.

Netizens may be venting their anger over the unresolved issue of RM2.6 billion in Prime Minister Najib Abdul Razak’s personal bank accounts, but singer Amirudin Hizadin has instead chosen to express his concern through music.

His sombre song, which describes the RM2.6 billion as “missing stars” that has made his world dark, has quickly gone viral after less than half a day in the cyberspace.

The Malay music video titled ‘Mana Hilang 2.6 Bintang‘ (Where have the 2.6 stars disappeared) uploaded on Facebook garnered over 80,000 views with more than 3,300 shares at writing time.
…

The chorus avoided direct mention of the RM2.6 billion or the prime minister not coming clean on the matter, but references were apparent.

“Where have the 2.6 stars disappeared, which should be shining upon our nightmare and darkness.

“Where have the 2.6 stars disappeared? I ask ‘Mr Sun’ (Pak Mentari) but he remains still silent,” he sang.

‘Mentari’ means sun in Malay but the sound of the word closely resembles ‘menteri’ (minister).