Posted on November 5, 2015 by weehingthong

PETALING JAYA: Two motorists were charged in a magistrate’s court over a road rage incident in Subang Jaya on Oct 28.

In the 10.37am incident in Jalan SS15/5A in Subang Jaya, both accused had a dispute over a reserved parking lot. A 17-second video clip of the incident went viral. 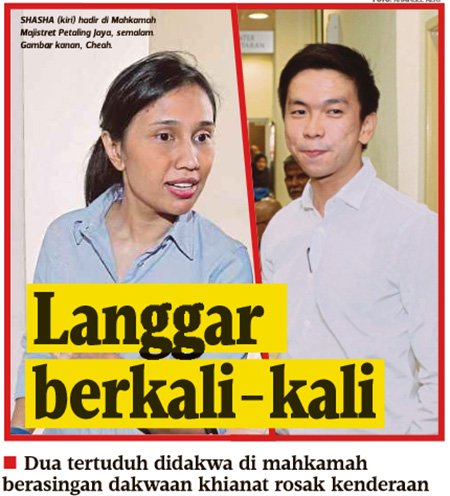 A fight for parking space in Subang Jaya turns ugly and the two drivers are now being investigated by police. – The Malaysian Insider file pic, November 1, 2015.

A dispute over a parking lot in Subang Jaya turned into a full-blown road rage incident when the two drivers involved – a man and a woman – allegedly damaged each other’s car.

A 17-second video clip showing the female driver battering the guy’s Toyota Camry with a steering lock is being shared on social media.

However, police said there was more to the story than what was shown in the video recorded by the male driver from inside his car, The Star reported.

Subang Jaya police chief Yahaya Ramli said in the incident that occurred on Wednesday, the 34-year-old woman had wanted to park her car at the lot in Jalan SS15/5A but the male driver had parked his vehicle instead.

“She ended up parking her Volvo in front of the Toyota and went about her business,” The Star quoted him as saying.

He said a couple of hours later, the man wanted to leave the car park and blared his horn to get the owner of the other car to move her vehicle.

The woman, however, ignored it for a while and when she finally came to move her car, the man allegedly accelerated his vehicle and hit her car, Yahaya said.

“An argument ensued and the man allegedly hurled profanities at her and shoved her elderly father,” he was quoted as saying.

“But the man allegedly drove his car into hers several more times, causing damage to the right side passenger door.

“She then took out a steering lock and began hitting his car,” The Star quoted Yahaya as saying.