Two students, their friend’s house and a ‘Datuk’ ex-cop neighbour. In Shah Alam.

The two students were supposed to have a group study with their friend but found out that he was not at home.

SHAH ALAM: A misunderstanding led to the arrest of two teenagers by an ex-policeman with the title Datuk, for allegedly trespassing a house in Section 8 here on Friday.

Shah Alam police chief ACP Shafien Mamat said in the 5.20pm incident which had gone viral on the social media, the Datuk arrested the two students after receiving a phone call from the owner the house, who saw two strangers entering her house on the closed circuit television (CCTV) cameras which were connected to her mobile phone.

“After seeing the two teenagers enter her house, the owner who was not at her home called the 64-year-old ex-policeman, who is her neighbour,” he told a press conference at the Shah Alam police headquarters here today.

Shafien said the two teenagers were supposed to have a group study with their friend who is the neighbour’s son but later found out that he was not at home.

Commenting on the Datuk who had allegedly fired a warning shot, Shafien said so far police have not found any bullet shells at the scene.

On the injuries suffered by the teenagers, Shafien said police were awaiting verification reports from doctors.

Man allegedly fired his gun and hurt teens for ‘intrusion’

SHAH ALAM: Police are investigating an ex-policeman Datuk for allegedly discharging a firearm and voluntarily causing hurt after he thought two boys were trespassing into his neighbour’s house.

A source said the two 16-year-old boys had driven to their friend’s house in Section 8, Shah Alam, on Friday evening, where they were supposed to have a group study for their coming SPM exams.

Upon learning that their friend was not at home, the boys walked into the house, as the gate had been left open, and decided to wait at for him the porch.

Little did they know that their friend’s mother was in the house and she thought that she was in danger.

The woman dialled her neighbour – an ex-policeman, who rushed to the house to “apprehend” the so-called intruders.

The Datuk reportedly pulled up in front of the house in his BMW and exited with his gun drawn, shouting, “intruders!”

The startled teens were too shocked to even explain themselves before the Datuk allegedly fired a shot into the air and ordered them to lie face down.

He then stepped on their heads and allegedly shouted expletives at them before calling the police.

The boys, who were taken to the Section 6 police station for questioning, were released after their friend showed up with his mother to clear the air.

Officers then took the boys to a clinic for treatment as one of them had suffered a bloodied nose after the attack by the Datuk.

Misunderstanding resulted to being beaten by ex-cop http://nst.com.my/node/96436  #nst170 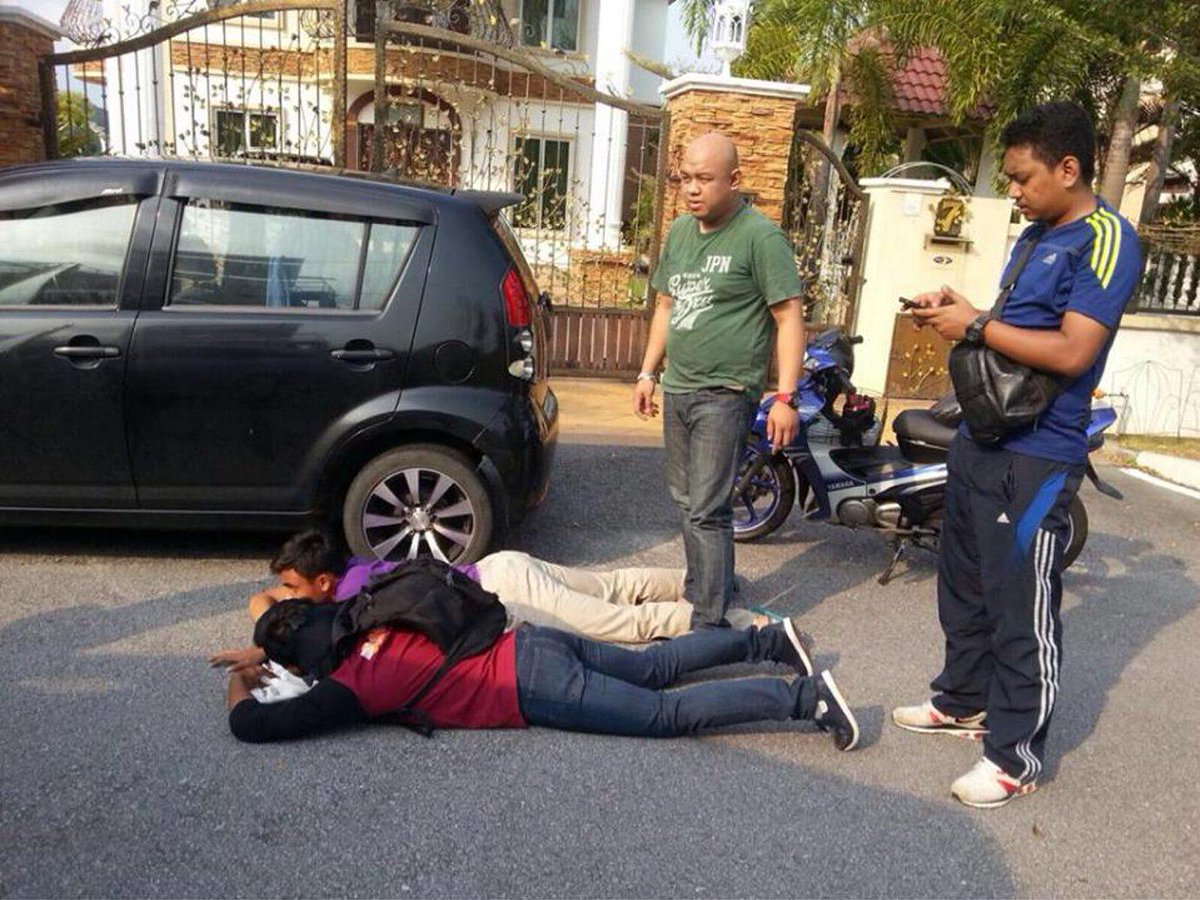 SHAH ALAM: A misunderstanding has resulted in two students being beaten up by their friend’s neighbour, an ex-cop with the title ‘Datuk’, in an incident at Section 7 here on Friday.

In the incident which has gone viral on the social media, a relative of one of the victims claimed that not only were they roughed up, the ‘Datuk’ also pointed a pistol at the victims and fired a shot in the air.

Both suffered injuries to their body and head.

Prior to the incident, the two students allegedly went to their friend’s house to study but found that he was not at home. They exit the gate and it was then that they were caught by the neighbour.

After pictures of both victims went viral, their friend, whose house they went to, took to the social media to clarify the situation.

“They are not stealing. How could they rob their best friend’s house?

“They came to my house to study. Can’t you see the bag the boy was carrying? The gate was open and they went in to see if there were people at home.

“When they saw that no one was at home, they went out and were caught by the neighbour and accused of stealing. This is all a misunderstanding,” said the friend who identified himself as Zharfanaiman.

Directors KILLING BOY SCHOOL AND RELEASING TEMBAKAN- Shah Alam Section 7- Friday 14/8 / 2015- 2 students who will sit for the SPM examination this year has been hammered by a former police officer of the rank dato. 2 people believed these students wanted to revise and teach his friend who lived in the house in the school subjects. Unfortunately they were accused of trespassing when actually they bring school bags, school uniforms and even worse they are outside the home.

Management is the former police officer, was brandishing weapons while they do not carry any dangerous device, after referenced weapons, both the students raised their hands to indicate surrender. Management is still pointing a gun still loaded in advance in the student neighborhood just 30cm. They also remove the DATO a warning shot into the sky. The students also had trampled his head until berdarah.mereka handcuffed and taken to the police station. They were released because they do not intrude.

The family is the only request being came to apologize for this incident without checking who had risked their lives. Unfortunately, these being quite arrogant and ego to do such things.

SGT WEIGHT APPLY TO NAK SORRY TO VERY SERIOUS MATTER WHICH IS IT?
SECTION VERY TO NAK SHOOTING?

SLAVE OFF IF NI, MMG MCM CASE SO AGAIN THE COMMANDER OF WHICH IS SHOT IN SECTION 7 !!!

PLEASE viral KAN! ALREADY MAKING THE VICTIMS FAMILY REPORTS AND WILL BRING SUCH being tried in the courts !!!

SHAH ALAM: Police have confirmed receiving three reports concerning two school children who were alleged to have trespassed the home of a former senior police official with the title ‘Datuk’ as spread on the social media.

Shah Alam District Police Chief ACP Shafien Mamat said one report was lodged by the ‘Datuk’ while another two were received from the two youths, aged 17 years last night.

However, Shafien did not reveal the details of the case which was alleged to have been committed in Section 7 here on Friday.

Shafien said he would clarify the matter in a press conference to be held at the Shah Alam District Police Headquarters tomorrow.

Ex-cop under probe for firing at teens

SHAH ALAM: A retired senior police officer who is a Datuk is being investigated for allegedly misusing his firearm after he purportedly mistook his teenage neighbours’ friend for burglars and opened fire with his pistol at Section 7 here on Friday.

Shaken up by the gunshot fired by the ex-policeman who had served as a deputy state police chief and a federal deputy director, the youths, both aged 17 raised their hands in a gesture of surrender before attempting to explain themselves.

The case went viral in the social media where purported details of the incident were revealed.

It is learnt that the teenage boys who were casually attired and carried a knapsack had gone to a classmate’s house in the residential area for a group study session for their upcoming SPM examination.

As the teenagers were about to step into the house at the main gate, they were allegedly confronted by the ex-cop who is in his 60’s at gunpoint.

The teenagers claimed that although they were not carrying any item that appeared to be a threat to his safety, the Datuk pointed his handgun close to their faces before firing a warning shot into the air.

They also alleged that they were assaulted, handcuffed and taken away to the district police headquarters by several policemen but were later freed after it was found that they had not trespassed into the said house.

Sources revealed that the teenagers’ friend and his family were apparently oblivious of the commotion that occurred outside their home. 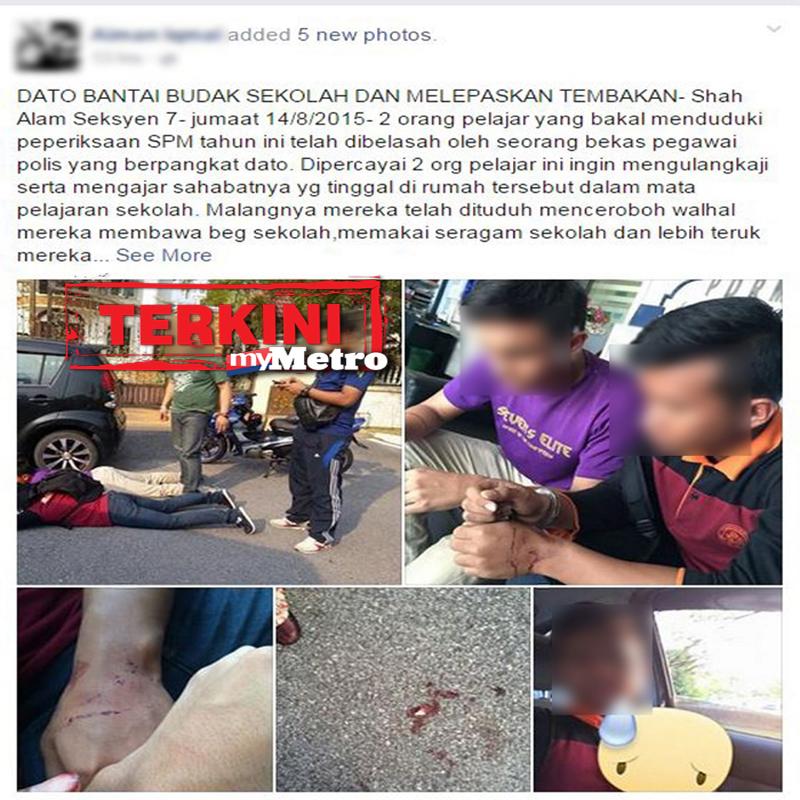 Like Loading...
This entry was posted in malaysia crime, neighbour beats up boys he thought were thieves, shah alam: 2 boys beaten by Datuk ex-cop and tagged crime in malaysia, shah alam: datuk ex cop beat up 2 boys. Bookmark the permalink.