BATU PAHAT: A male suspect has driven off in a police car in in Bandar Seri Alam,  Pasir Gudang.

Johor police chief Senior Deputy Comm Datuk Rusli Ahmad said the incident took place between 8pm and 10pm on Saturday when the patrol car went to Bandar Seri Alam after receiving a robbery alert from members of the public.

It is learnt that the policemen exited the car with the engine running to investigate before the 22-year-old suspect, who was among the crowds gathered at the place, drove away the car.

2 police officers on the scene and the suspect in handcuffs after police, hands handcuffed suspects before police officers outside the car when the police car drove away the engine … http://bit.ly/1NaQK6o
Translated by Bing 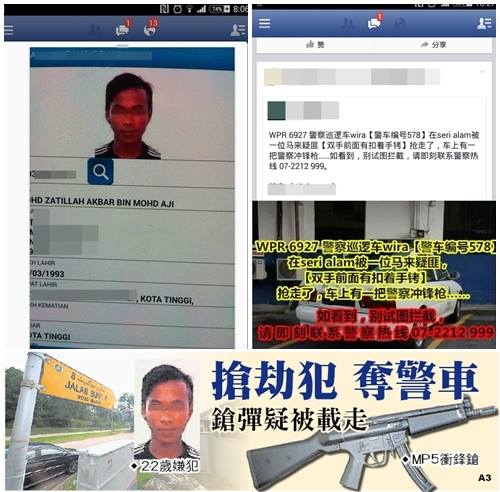 22-year-old robbery suspect escaped in a police patrol car on Saturday night after being picked up in Bandar Seri Alam, Johor #nst170