Snickers paired up with Aussie builders to call out empowering statements to unsuspecting members of the public.

This video features members of the general public and their actions and opinions in this video are their own, and these individuals are in no way associated with or endorsed by Mars Australia Pty Ltd, Snickers, or their agencies, representatives or affiliates.

A great takedown by @feministabulous of how that Snickers ad is offensive to women AND men http://bit.ly/1fsIhXe  #EndSH

Snickers Mocks the Idea that Men Can Respect Women

This is one of the most demoralizing ads I’ve seen in a long time. It’s an Australian ad for Snickers in which construction workers on a busy city street yell pro-feminist comments at women, like “I’d like to show you the respect you deserve” and ”You want to hear a filthy word? Gender bias” and “You know what I’d like to see? A society in which the objectification of women makes way for gender neutral interaction free from assumptions and expectations.”

The construction workers are actors, but the women on the street are (or appear to be) real and their reactions authentic. The first thing women do is get uncomfortable, revealing how a lifetime of experience makes them cringe at the prospect of a man yelling at them.  But, as women realize what’s going on, they’re obviously delighted.  They love the idea of getting support and respect instead of harassment from strange men.

This last woman actually places her hand on her heart and mouths “thank you” to the guys.

And then the commercial ends and it’s all yanked back in the most disgusting way. It ends by claiming that pro-feminist men are clearly unnatural. Men don’t respect women — at least, not this kind of man — they’re just so hungry they can’t think straight.

The twist ending is a genuine “fuck you” to the actual women who happened to walk by and become a part of the commercial…These women were (likely) given the impression that it was about respecting women, but instead it was about making fun of the idea that women deserve respect.

Snickers Australia video gets some buzz, but not for the right reasons

If you’re a woman — especially a woman living in a big city — then you’ve likely experienced the construction worker catcall. It’s a stereotypical scenario, but it’s a stereotype for a reason: it happens all of the time. Snickers Australia’s latest ad plays on this stereotype in a way that’s meant to empower women, but the Snickers tagline at the end brings in to question how empowering the ad’s message really is.

The spot features a group of Aussie construction workers calling out to women passing by on the street. However, instead of shouting out the expected propositions ranging from flirtatious to lewd, these construction guys shout out words of encouragement and female empowerment. For example, one worker tells a woman that the color of her shirt is really working on her and then wishes her a “productive day.” Another worker shouts out, “Wanna hear a dirty word? Gender bias.” A third asserts that a woman’s place is “wherever she chooses.”

The only catch is, after all of this positivity towards women and gender equality, the ad ends with the Snicker’s tagline, “You’re not you when you’re hungry.” 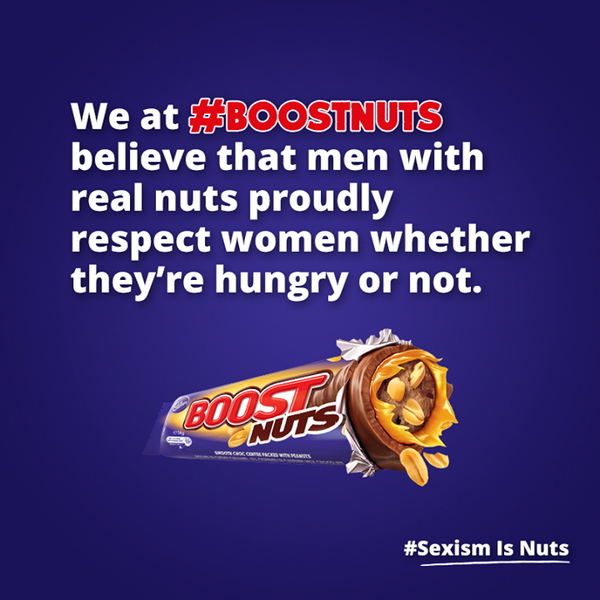 Snickers Ad Manages to Be Sexist to Both Men and Women

The ad both breaks and reinforces gender stereotypes

In this ad produced by Snickers in Australia, watch actors as construction workers shout empowering statements to women who are walking down the street. Remarks include, “You want to hear a filthy word? Gender bias!” and “You know what I’d like to see? A society in which the objectification of women makes way for gender-neutral interactions, free from assumptions and expectations. You go girl!”

That said, the ad still depicts the stereotype of construction workers shouting at women:

Like Loading...
This entry was posted in Uncategorized and tagged snickers, snickers aussie advert. Bookmark the permalink.