Around 80,000 people marched Sunday for Spanish unity, staging a counter-rally in #Barcelona a day after 350,000 #Catalan separatists held a protest over the jailing of nine regional leaders.https://t.co/TwCypW3W6C

Police clashing with demonstrators, and being completely overwhelmed.

Barcelona mayor pleads for violence in Catalonia to stop amid pro-independence protests https://t.co/fm2DRQM5LO

“All we get is repression from Spain.”

Violent protests continue in Barcelona for a second day over the jailing of nine Catalan separatist leaders. pic.twitter.com/aywnkqeF5R

Watch this Europe ❗
To vote and protest peacefully in Spain entails prison sentences and police aggression.
This is happening NOW in Barcelona.#SpainIsAFascistState pic.twitter.com/444ApC8RgK

For weeks, Catalan activist groups like @PicnicxRep, @tsunami_dem, & @assemblea have examined the techniques of Hong Kong protesters closely, taking notes on what works & what might be replicated in Catalonia. HKers' "Be Water" is now a global export. https://t.co/2aMzKGmR16

The “Be Water” nature of Hong Kong’s protests—fluid, flexible, and fast-moving—has taken on a new form half way across the world in Catalonia: as a tsunami.

After a Spanish court on Monday (Oct. 14) handed down lengthy jail terms to nine Catalan leaders for their roles in a 2017 secession attempt, tens of thousands of Catalans took to the streets to protest against what they saw as heavy-handed political persecution and blatant repression of the region’s political rights.

The protesters were answering the call to action from a group called Tsunami Democràtic, which launched in September (link in Spanish) urging mass peaceful and civil disobedience actions in order to safeguard Catalonia’s freedoms. Following the sentencing, protesters quickly gathered at plazas and on streets across the region, cutting off major thoroughfares and blocking traffic before heading en masse to their next target: Barcelona’s El Prat airport. As they set off from the city center, a group of youth shouted, “We’re going to do a Hong Kong!“ 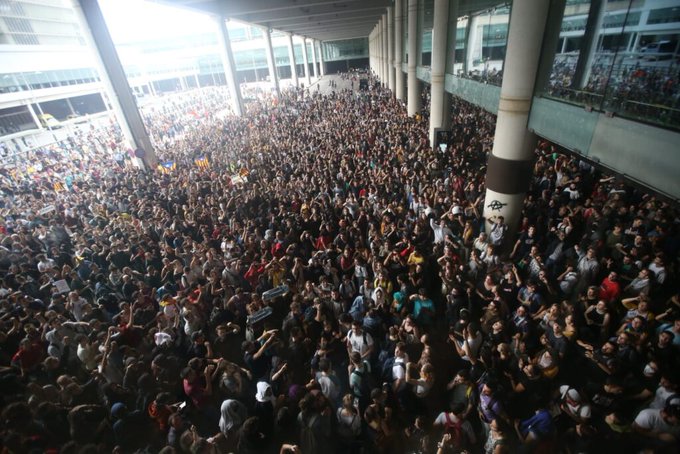 3,779 people are talking about this

They were referring to what had happened at the Hong Kong airport almost exactly two months prior, when thousands of protesters forced the international transport hub to shut down. At Barcelona airport on Monday, strikingly similar scenes played out as thousands occupied both the terminal and the roads outside the building, eventually forcing the cancellation of at least 100 flights. Tsunami Democrátic even distributed some 130 boarding passes (link in Spanish) via the messaging app Telegram so that protesters could enter the airport, in a move reminiscent of some Hong Kong protesters who purchased cheap flights in order to enter the airport and circumvent a court ban on demonstrations at the building.

The months-long protests in Hong Kong have also been studied in Indonesia by students who took to the streets to oppose new laws, and Extinction Rebellion climate activists in the UK, but it is the Catalonia protests that appear to be most directly inspired by the Hong Kong playbook. For weeks, Catalan activists have examined the techniques of Hong Kong’s protesters closely, taking notes on what works and what might be successfully replicated in Catalonia. In late September, the grassroots group Assemblea Nacional Catalana even held a public forum titled, “Experiences of the use of new technologies in the nonviolent struggle: the case of Hong Kong.”
. 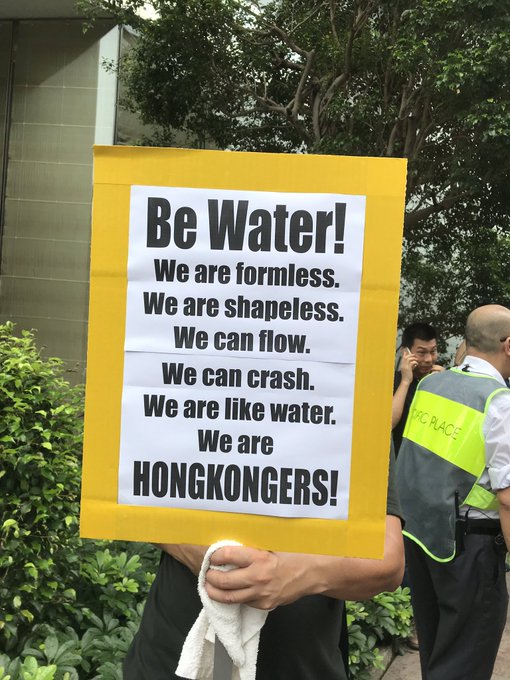 56 people are talking about this

Now, Catalan activists are similarly putting that thinking to use. On social media, Tsunami Democràtic has made use of the “Be Water” hashtag, and their call for everyone to be “a tsunami” quite literally embodies Bruce Lee’s philosophy in the flesh. Picnic x República has also embraced the importance of adapting quickly like water to changing situations, taking a page from Hong Kongers’ playbook by urging protesters to move fluidly in response to police actions and not to fixate on holding static positions.

That the Hong Kong movement has been able to sustain protests for over four months and continue to command international attention also serves as a model for Catalonia. Writing in a column last month, the Barcelona-born journalist and political commentator Jordi Barbeta held up Hong Kong as an example (link in Catalan) of a movement that has successfully given a “global dimension to a local conflict.” Picnic x República is aware of the importance of being in the global spotlight, too, and has encouraged Catalans to use masks “like those used in Hong Kong”—not only to protect protesters’ identity from the authorities, but also “reinforce the international image” of Catalonia’s fight. In this sense, Catalan activists are emulating the distinctive and highly recognisable optics of Hong Kong protesters—hard hats, respirator masks, and umbrellas and other eclectic shields—as both a preventative and performative act.

Beyond parallels in protest techniques, the Catalonia and Hong Kong movements share similarities in the nature of their struggles, said Joan Ramon Resina, a professor at Stanford University specializing in Spanish and Catalan literatures and cultures.

//Chris Chow Chi-kit, a member of Studentlocalism, said the Catalan flags were a reference to the shared situation in which both autonomous regions found themselves.//https://www.scmp.com/news/hong-kong/politics/article/2166460/organised-crime-unit-hong-kong-turns-its-attention-and …

“Dictatorships like the Chinese and the resurging Spanish one do not tolerate dissidence or even cultural difference,” he said. “Thus, what the Hong Kong and the Catalan challenges to authoritarian regimes have in common is their value as symptoms for the growing impatience of peoples around the world with political systems that sacrifice the rights of minorities for the sake of expanding their power.”

Serious violence continues in #Barcelona for a second night. As with #GiletsJaunes the UK media wont report this much yet will have plenty of reports from Hong Kong. @SkyNews @BBCNews @itvnews https://t.co/Ym3fgZ6o06

Some 10,000 people blocked access to Barcelona airport for hours on Monday, heeding social media calls to "Turn Catalonia into the new Hong Kong" – the most disruptive protest held to date by the modern Catalan separatist movement https://t.co/d5ALaQqKTr

Barcelona (AFP) – With an appeal to block Barcelona’s airport, a new, mysterious organisation called “Democratic Tsunami” has raised the temperature of Catalan separatist protests in Spain which until now have been peaceful.

The leaders of the movement remain unknown, using social media and encrypted messaging apps to rally thousands of supporters on Monday against jail terms meted out to nine separatist leaders over their role in a failed 2017 secession bid.

Some 10,000 people, according to Spain’s interior ministry, blocked access to Barcelona airport for several hours on Monday, heeding widespread calls on social media to “Turn Catalonia into the new Hong Kong”.

It was the most disruptive protest held to date by the modern Catalan separatist movement: 110 flights were cancelled and 115 people were injured during clashes with police.

“This is just the beginning, we have to prepare for what is coming and ensure the democratic tsunami is unstoppable,” the group wrote in a tweet late Monday after the airport protest made headlines around the world.

The tone contrasts with the festive style of the first mass pro-independence rallies staged nearly a decade ago by influential grass-roots separatist associations ANC and Omnium which dubbed their movement the “revolution of smiles”.

But after the failure of the 2017 separatist bid which culminated with a banned referendum followed by a declaration of independence, a part of the separatist camp understood that “this revolution of smiles did not end well”, said historian and political analyst Joan Esculies.

“The Democratic Tsunami wants to lead a sort of urban guerrilla war with one-off actions,” he added.

Caught off guard by the size of the airport protest, Spain’s media and central government are looking into who is behind the new movement.

“I have no doubt we will end up finding out who’s behind Democratic Tsunami,” Spanish Interior Minister Fernando Grande-Marlaska told public radio RNE on Tuesday.

The group first appeared on social media in September as a campaign to mobilise separatists ahead of the Supreme Court’s verdicts in the trial of the separatist leaders on the basis of “civil disobedience” and a “non-violent struggle”.

Its creation came a day after several separatist leaders met in Switzerland, including Catalonia’s former regional president Carles Puigdemont, raising suspicion that the movement was created by Catalan separatist parties.

The movement “brings together people of different sensibilities… but it is not controlled by any entity or party. Even if they are informed of how it is structured,” one of its organisers told AFP.

The leaders of the movement usually issue their directions to supporters through Russian-designed encrypted messaging service Telegram, where they have 150,000 followers.

The movement on Monday launched its own mobile app to distribute messages. To use it a QR, or quick response code, is needed and it can only be obtained from a member of the organisation.

It also put its name to a video message recorded in English by Manchester City football club’s Catalan coach, Pep Guardiola, in which he accused Spain of drifting “towards authoritarianism”.

In its tweet, the group said Guardiola’s statement had been broadcast by AFP, which is not true.

The group also launched an appeal to block Madrid airport with 1,200 vehicles and claimed that the operation was a success although Spanish airport authority AENA and other officials said there was no disruption.

Like Loading...
This entry was posted in Uncategorized and tagged Barcelona, bewater, catalonia separatism, hong kong protests. Bookmark the permalink.