‘The Master and His Wolf’: Movie on ‘Wolf of Wall Street’ money trail… 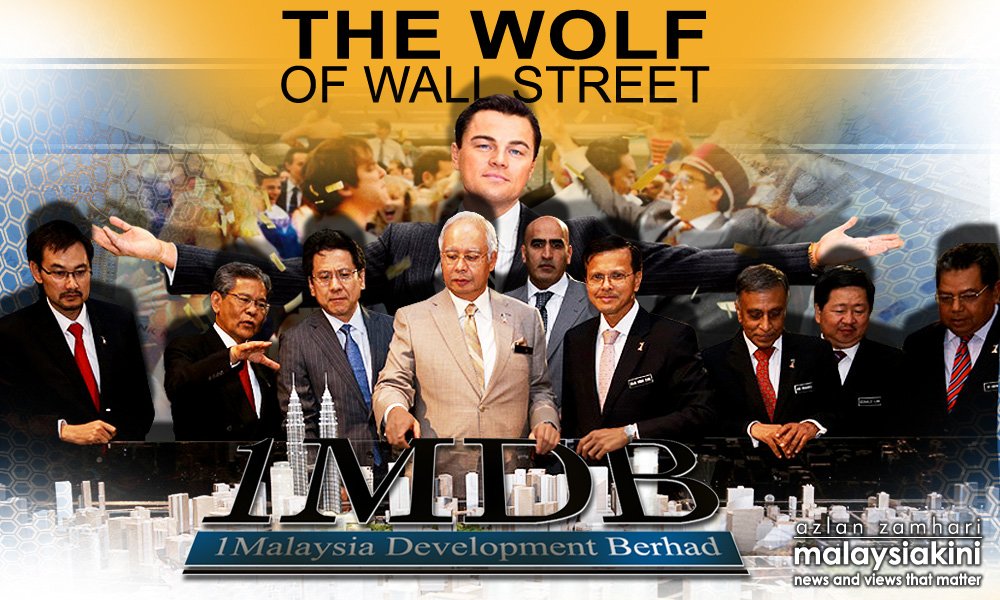 Oscar-nominated producer Mike Lerner is producing a documentary of the alleged corruption leading to the making of Hollywood hit ‘Wolf of Wall Street’, linked to the 1MDB scandal.

This comes after Swiss investigators say they have “elements in hand” to show some of the US$3.5 billion paid by 1MDB to a British Virgin Island firm as part of a power plant deal, went to a company in the “motion picture industry”.

“In ‘The Master and His Wolf’, we have a gripping story with a cast of fantastical characters, movie stars, prime ministers and a system of money laundering, with direct links between Malaysia via Saudi and Abu Dhabi companies which goes right to the heart of Hollywood’s elite,” British produce Mike Lerner told The Hollywood Reporter.

“Because of this historically massive corruption, the Malaysian government is on the brink of disaster while two suspicious murders with alleged links to the fraud remain shrouded in secrecy,” added Lerner.

“And all for what? Greed, celebrity obsession and the ambition to stand on a red carpet. Stories don’t get much bigger.”
…

Lerner told the entertainment news portal that filming for Malaysia for the new project has been completed, and the crew will now travel to Abu Dhabi, Switzerland, Luxembourg, Hong Kong and Singapore.

Lerner’s Roast Beef Productions started work on the film in 2015, the portal reported.

THE WOLF OF WALL STREET
.

SOME TIME BACK, IT WAS THE PM’S SON FROM A PREVIOUS MARRIAGE WHO MADE THE NEWS.

THIS TIME, IT IS ROSMAH’S SON FROM HER PREVIOUS MARRIAGE WHO IS IN THE NEWS.

‘The Wolf of Wall Street’ banned in Malaysia

The acclaimed but controversial film ‘The Wolf of Wall Street’ has reportedly been banned in Malaysia due to explicit content and language.

“Sources within Malaysia’s government film office told THR that the distributor of the film realised upon screening it that it would face huge problems with the censorship board because of its profanity, nudity and sex,” reported entertainment site The Hollywood Reporter.

TO SHIELD NAJIB-ROSMAH FROM SON’S SCANDAL?

“The Wolf of Wall Street” may be funded by Malaysian producer Riza Shahriz Abdul Aziz’s firm, but movie fans here will not get to watch the Hollywood show after it was reportedly banned by local authorities.

According to a report by The Hollywood Reporter this week, the film directed by Martin Scorsese and starring Leonardo DiCaprio was banned in Malaysia and Nepal despite getting through the censors —albeit not without significant cuts — in strict Middle East countries such as Lebanon and the United Arab Emirates.

“Sources within Malaysia’s government film office told THR that the distributor of the film realised upon screening it that it would face huge problems with the censorship board because of its profanity, nudity and sex,” said the report.

Malaysian viewers motivated enough can, however, catch the film in Singapore, which has approved it for shows in up to nine theatres there after slapping it with the “R21” rating that limits it to those over the age of 21.

Epic account of stock trading excess starring Leonardo DiCaprio under fire for mocking cerebral palsy Peter Berns, CEO of disability group the Arc and Stephen Bennett, president and CEO of United Cerebral Palsy, issued a joint statement saying: “The Wolf of Wall Street is getting a lot of attention for how it offends audiences on many levels, but one aspect that hasn’t been discussed is its use of the R-word and its unacceptable mockery of people with cerebral palsy. Hollywood just doesn’t seem to get it.”

Berns and Bennett are referring to two uses of the word “retard” in The Wolf of Wall Street, as well as a third scene where Leonardo DiCaprio‘s Jordan Belfort is describing his drug experience as reaching the “cerebral palsy phase”.

The statement continues: “Among moviegoers who have paid to see The Wolf of Wall Street in recent weeks are people with disabilities, their parents, siblings and friends. It’s time for Hollywood to wake up and see that their customers deserve better.”

The Wolf of Wall Street
Like This Page · 7 hours ago

HOW NOW UMNO! Najib’s family movie Wolf of Wall St ‘TOO HARAM’ to show in M’sia!

PM Najib Razak’s step-son Riza Aziz was earlier interviewed by the top Hollywood magazine, The Hollywood Reporter, about his eyebrow-raising series of investments in the movie business.

When they asked about what his family thought, he implied that his ‘Dad’ took an interest and monitored the content of his films. Referring to the current US$100million movie just released by Riza’s firm Red Granite Pictures, the Martin Scorcese directed Wolf Of Wall Street, starring Leonardo di Caprio, the conversation went thus:

In this way Riza Aziz publicly made plain that the Prime Minister of Malaysia, Naijib Razak exercises a level of control over his step-son’s movies and regards Wolf Of Wall Street as a film that has ‘pedigree’ i.e. class. Too Haram for Malaysia!

Just not (enough) on…. star of the movie Margot Robbie

However, as the film started to premiere around the world this week the authorities in Muslim countries have been stepping in with one word on their lips “Haram”!

“I spoke with some film industry contacts in Malaysia and I’m told ‘Wolf of Wall Street’ was originally on the schedule for a local release, but after exhibitors saw the film, they realised there was no way they could get away with screening it in the country, due to the drugs, nudity, profanity”.

If so, it can hardly come as a surprise, given that Najib Razak has presided over a government where religious zealots have been given increasing influence over what ordinary people can and cannot do.