A convicted murderer in Sydney’s Villawood detention centre appears to have made videos defending Malaysian Prime Minister Najib Razak around the time he was attempting to blackmail Mr Najib’s government.

Australian Border Force has told Fairfax Media that Sirul Azhar Umar made the videos before he was arrested and taken to Villawood in January last year. 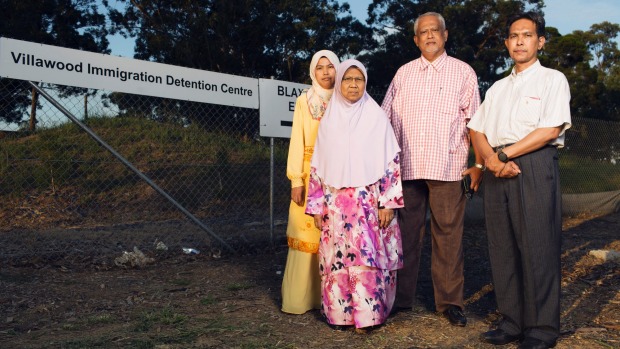 Just days before his arrest, Sirul attempted to blackmail the Malaysian government for $17 million to keep quiet over the brutal murder of a glamorous Mongolian socialite in Kuala Lumpur in 2006.

“Greetings boss, I am in difficulty here, I need $2 million to guarantee my child. After that I want $15 million and I will not return to Malaysia, I will not bring down the PM,” Sirul texted to a shadowy Malaysian middleman with links to high-level Malaysian officials.

The middleman, who has visited Sirul three times in Villawood, sent a reply back saying “they want to discuss”.

Australian Federal Police have refused to comment on whether they are investigating the messages that were retrieved from Sirul’s telephone during an investigation by al-Jazeera’s 101 East program.

An AFP spokesperson said the Malaysian government would have to formally agree before any investigation could proceed.

But Mr Najib’s office has repeatedly dismissed attempts to link him to the murder of 28-year-old Altantuya Shaariibuu as “entirely false smears motivated by political gain”.
…
Sirul sent the text messages referring to $17 million on December 17, 2014, just four days before he was arrested in Queensland on the basis of an Interpol red notice alerting police around the world.

A Facebook posting by a user claiming to be Sirul’s 19-year-old son Shuk Sz in January 2015 said: “In all honesty, I am the son of Corporal Sirul Azhar Umar. To those who don’t know about this case, just don’t say what you like. Watch your mouth. If I talk to the press, Malaysia will fall. The PM will also fall.”

Like Loading...
This entry was posted in Uncategorized and tagged Sirul Azhar Umar: $17 million blackmail from detainee in Sydney's Villawood detention centre. Bookmark the permalink.