Malaysiakini: Americk Sidhu, “Permit me to pre-empt your ‘expose’, Sirul.”

Robert K Chelliah, migration consultant, “Sirul, if you name me, I’ll tell everything about you.”

In a video from the Villawood Immigration Detention Centre where he is held, Sirul said he will name five people who tried to “bribe or coax” him into implicating Prime Minister Najib Abdul Razak in Altantuya’s murder.

Americk Sidhu has said he believes the five include Chelliah.

Sirul, Altantuya’s killer in Australia, to name 5 who wanted him to implicate Najib… 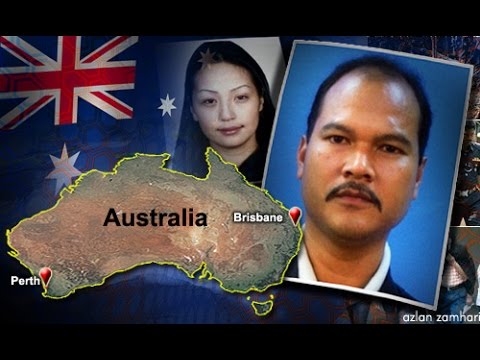 Permit me to pre-empt your ‘expose’, Sirul

COMMENT Former police commando Sirul Azhar Umar has indicated his intention to ‘expose’ the names of five personalities who have attempted to “bribe or coax” him into implicating Prime Minister Najib Abdul Razak, in the murder of Mongolian national Altantuya Shaariibuu.

This anticipated revelation is to manifest in Part 4 of a series of audio-visual presentations produced and directed from an Australian detention centre situated at Villawood, New South Wales and scheduled for release in the next few days.

Permit me to take the wind out of your sails, Sirul, by guessing the names of these individuals. They are most likely none other than Pokok Sena MP Mahfuz Omar (accompanying your mother), ex-Umno division leader Khairuddin Abu Hassan, Sarawak Report founder and editor Clare Rewcastle-Brown, former prime minister Dr Mahathir Mohamad and your migration consultant, Robert Chelliah.

Before I proceed further, let me say I find it incredibly incongruous for a convicted cold-blooded murderer – who has never denied shooting a poor defenceless young lady in the head twice, and blowing her body up with military grade explosives – to sit piously before a camera in a religious white skull cap and offer to the world at large, unsolicited narratives on your present position and your advice surrounding this murder.

First, let’s put the situation into perspective. You are not a celebrity. You have been captured by the Australian Immigration Authorities and incarcerated because you are a convicted criminal.

The Australians have, however, very kindly placed at your disposal the means by which you may challenge your detention under the provisions of the Australian Migration Act 1958 and the Regulations made thereunder.

You have taken advantage of these facilities by lodging with the Migration Authorities what may be described as a ‘Protection Visa’ sub-class 866. If you succeed in your application, you will be allowed to remain in Australia as a free man with permanent resident status.

You have been advised by your Australian lawyers and migration consultant that anyone applying for such a protection visa must undergo a process of character clearance under Section 501 of the Migration Act. The relevant minister must be convinced that it is safe for a person with a criminal conviction to be released into the community.

This entails the visa applicant being honest and truthful in his application. It behoves the applicant to describe in detail under what circumstances and conditions he committed the criminal offence for which he had been convicted – i.e. to attempt to reduce the gravity of the crime by way of “mea culpa”.

In other words, you will have to convince the minister that you are not inherently a criminal by nature, but were forced – by extenuating circumstances – to commit the offence; for example, in the course of your duties as ordered, which may have been the cause of your error of judgment at the time of committing that offence. You will also have to show genuine remorse and regret.

As you have yet to comply with any of the above criteria, your application for this visa looks as if it is doomed from the start, despite what you may have been told to the contrary.

Sirul, you have gone on record publically, at least twice, by making statements implying that you were ordered to commit this murder.

The first occasion was during your trial at the Shah Alam High Court where you read out a lengthy statement from the dock after your defence was called. In this statement you categorically described yourself as a scapegoat used to protect those who were not in court.

The second occasion was when you gave an interview with Malaysiakini on Feb 17, 2015 in which you also categorically stated you were under orders to kill Altantuya, and that “those with motive for the murder are still free.”

You have not retracted these statements.

Your Malaysian lawyers also confirmed on Dec 31, 2015 that you had applied for a ‘protection visa’ with the Australian authorities and if this was granted, you would be released from detention and would be free to be at large in Australia – but that the biggest stumbling block to obtaining this visa was your conviction.

Bearing in mind the criteria set in place for a visa of this nature to be granted in your circumstances (being a convicted killer), the only hope you would have is to come clean and explain why you committed this murder and under whose instructions.

Your Australian lawyers and your migration consultant have already informed you of this and have advised you to reveal the person or persons who gave you those orders, so as to assist your application for an 866 Visa.

You were about to do this until a hurriedly gathered posse of advisors from Malaysia (whose identities are available), descended on Villawood to persuade you otherwise.

I am reliably advised that amongst this posse were three Special Branch officers from Bukit Aman.

They were in contact with a “Datuk” in Sydney who was then entrusted with the task of looking after your financial affairs and those of your son (who is still in Australia), and to identify a AU$1 million property into which you would move once your visa was granted, all to be financed by a certain party.

Your solicitor, Christopher Livingstone, barrister Matthew Golan, and migration consultant Robert Chelliah, were a little concerned that your application for the 866 Visa would stand little chance of success unless extenuating circumstances for the murder were put forth.

You appear to have ignored this advice and instead were persuaded to partake in what can only be described as a very feeble attempt to extricate yourself from your very own committed admissions of unseen hands directing the extermination of a Mongolian irritant.

You now intend to come out with the final (presumably) audio-visual presentation releasing the identities of those you accuse of trying to bribe or coax you into revealing the personality involved in issuing you with those orders to kill. One of these individuals might even be your own mother.
…

Throughout this period you were an out-of-work former police corporal, languishing in the Sungai Buloh penitentiary with no access to funds. Your lawyers could not have survived without payment, which would have been substantial for the amount of work involved. How did you manage to pay them?

And who is paying for the continued services of your Malaysian legal team for the work they are doing for you in Australia, and all their travel and accommodation expenses for the numerous trips they have made to Villawood? And who is paying your ‘Datuk butler’ in Sydney for looking after all your needs?

I am sure these are some of the questions every right-thinking Malaysian is asking.
…

Your attempted protection of Najib has only succeeded in opening a Pandora’s Box of suspicions where none may have existed.

Considering the entire circumstances, and specifically acknowledging the fact that you have said you had absolutely no personal motive to kill Altantuya, anyone with a modicum of intelligence would have to conclude that you have been persuaded to refrain from revealing the identity of the person who ordered you to commit this murder with misguided promises of financial security in return.

These promises could only have come from one man, who obviously wields great clout and who appears to have access to vast sums. Who is this man Sirul?
…

My guess is this impasse will be solved once your death sentence is commuted to one of life imprisonment, or you are granted a pardon. Only then will an application for extradition succeed and the Australians will quite happily hand you over to the Malaysian police. Who knows, perhaps someday you will be known as ‘Datuk Sirul Azhar Umar’ even?

Others have been awarded honorific titles for much less, after all.

AMERICK SIDHU is the lawyer who represented the late private investigator P Balasubramaniam.

No need for five names, Sirul, one will do

YOURSAY ‘Who cares about those who want you to implicate Najib? We just want the one who ordered you to kill.’

Permit me to pre-empt your ‘expose’, Sirul

The Mask: Who cares about the five persons who wanted you to implicate Prime Minister Najib Abdul Razak? We just want the one person who ordered you to kill Mongolian national Altantuya Shaariibuu.

Anonymous_1375151044: Quote from Sirul Azhar Umar in court: “After urinating, she saw the weapon that I was holding. I saw that she was in a state of fear and she pleaded not to kill her and said she was expecting. At the same time, Azilah wrestled the woman to the ground and I could see she had fallen and was unconscious. I opened fire towards the left side of the woman’s head.”

Yet few days ago, Sirul, in a video, said she wasn’t expecting. It’s obvious Sirul has become a pawn in a big chess game. Don’t blink. You might lose.

…
Legit: Thank you, Americk, for enlightening us on these legal issues. Knowing what Bolehland can do, this Sirul fella’s sentence may be commuted to life imprisonment or may be even pardoned and voila, he will be back in Malaysia a free man and living a luxurious life.

Like Loading...
This entry was posted in Uncategorized and tagged altyantuya, Americk Sidhu, Sirul. Bookmark the permalink.

3 Responses to Malaysiakini: Americk Sidhu, “Permit me to pre-empt your ‘expose’, Sirul.”